remember that there were small gaps between the track and supports on the plans though. Does that not mean that there might be some variation in track type and design. :?

It was all Bi-rail track on the plans.
Top

I read somewhere that Intamins new square supports make the coasters quieter, so I was thinking maybe the weaker Bi-rail/ more supports where quieter than the Stronger tri-rail/ less supports ratio. If you get what I mean haha, just a thought.
Top

"Johno" wrote:
It was all Bi-rail track on the plans.

Indeed, and the track is identicle to that which we have (like I always said would be the case to the 'it's a B&M' people)... so no, no tri-rail on this ride.
Top

To be honest I would think they were just stuck understandably not thinking they would be able to get a thrill coaster to be able to go through the woods. Anything that had too thick track (especially B&M) or too large supports would presumably end up being rejected

At this point, we're still not sure if this coaster's going to be launched. Whatever happens i'm always going to think that they've wasted a world's first. World's First Innovative Family Coaster? I say knock Rita down sometime in the future and put another thrill coaster in its place.

I do not want a family orientated park. Although saying that I love Spinball Whizzer, parents wouldn't go on it though -- and it's a family coaster.
Top

I think the point is that even on the plans this was billed as a 'corkscrew replacement'. Personally I hope that this is what this coaster is.

He couldn't go on any of the big rides, which he'd gladly have done. Alton have hit the nail on the head with this one. Next: a Youngstar coaster near the farmyard/storybook land and we'll be on our way to greatness!
Top

"chrisdibben"&quot;][quote=&quot;"Diogoj42" wrote:
Has everyone forgotten that the plans only showed bi-rail track?

I'm sure there's some tri track on some of the cross-sections in the plans. I'm surfing on my phone at the moment so I can't check the images to say for sure which one.[/quote]

I'll stand corrected on this point. All the cross-sections show bi-rail track, even the first 270 degree corner, which is where you'd have to assume the highest sustained G will be experienced.

I agree with the points made since - tri-rail may not be needed if you have enough supports for the bi-rail track.
Top

I wonder how many trains will be in operation at one point? Surely if the park is choosing small trains then they must have several running or the throughput will be horrible.
Top

I think it was mentioned in the plans there will be 2 trains, and a capacity of 1200 an hour, which was the same a Corkscrew.

But with what is expected to be quite a long ride time, I would imagine there would surely be more than 2 trains? I'm thinking it possibly it may of just been used as a comparison to Corkscrew.
Sent from my ZX81 via Time Travel

No offence to everyone on here debating the "family coaster" thing to great length, but its blatantly obvious that someone from towers have stuck that on just to throw you lot off. No shipping note or packing note would look like that, or say anything like that on it. Plus, if they are trying to keep everything such a secret, they wouldn't leave notes like that on where obsessed fan boys would be able to see them.

I agree, someone has just just stuck this label on to throw us off abit. I think once we see the track being built and the lift hill the coaster will start to look impressive then we'll have a better understanding of what its going to be. But until then we have to keep our minds open. well thats my opinion anyway.

2 trains on the track?

It was in the noise comparison.
Top

My theory is that i think your be on broomsticks firstly. The first half is a normal coaster. Then when it pulls into the indoor section its going to be pitch black. The train has clamps that grip a section of track above. The track below fulls away and the coaster is now turned into a suspended coaster for the final bit. What do you guys think to that as that is what makes a world first a multi track coaster.
Top 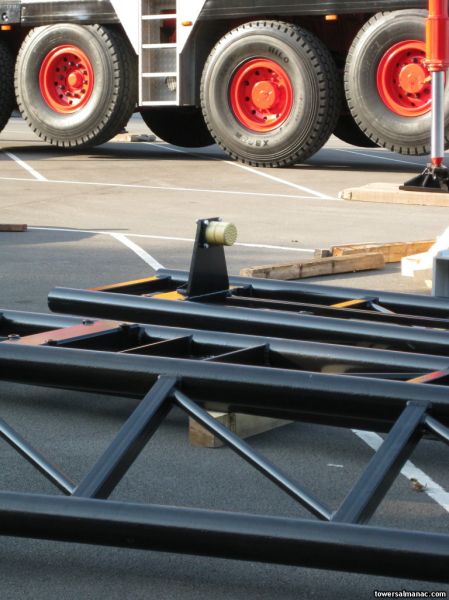 The one other Mine Train Coaster in the world that is due to open this year at Happy Valley also has the same track. If SW6 was to be a Mine Train Coaster, then we could well be seeing a wheel lift hill rather than a chain, and the bit of straight track seen on the right in this picture is definitely for some sort of kicker wheels, however it's hard to say if it is going to be for the lift hill or part of the track around the station building/brake run.

After saying all of that though, SW6's layout is much more similar to those of Intamin Mega-Lites, with a drop followed by a 270 degree helix and then an air time hill. Also, SW6 is higher and has a bigger drop than the current Mine Train Coasters around, although Intamin do say they can "meet any park's requirements" with the Mine Train Coaster.

It's an interesting one, and for now I'm going to say that it will be a cross between these two different models, they certainly seem to be the two models that are most similar to what we have seen of SW6 so far.

"Rob" wrote:
If SW6 was to be a Mine Train Coaster, then we could well be seeing a wheel lift hill rather than a chain, and the bit of straight track seen on the right in this picture is definitely for some sort of kicker wheels, however it's hard to say if it is going to be for the lift hill or part of the track around the station building/brake run.

I think you're onto something here, and it looks to me like a tyre driven lift. There are 4 sets of kicker wheels very close together, which would not be needed in the station.

A mine train coaster would also fit with the promotional images right at the very start.
Top

i don't think it will be a mine train coaster due to the angle and length of that first drop. that drop wouldn't be good with trains for mine train coaster, it needs a good train like a mega lite train which will be more thrilling than family.

I'm thinking we'll see a train from a mega lite, looking like a exploration type train.

Similarly, I think this could be a new 'Family Mega Coaster' model.
Top

That's definitely what I was thinking Johno. Hopefully that wont be the worlds first thing though, it better not be. :evil:
Last edited by D-Man on Sun Sep 20, 2009 1:29 pm, edited 1 time in total.

I'm a bit worried this ride may become quite rough within 5 or 6 years with that bi-track and such a tall first drop ...

Never found bi-track to age well amongst the faster coasters (Colossus being just one example) ...

Users browsing this forum: No registered users and 251 guests
×