Justin wrote:
From those YouTube screenshots, you can really make out the face on one side. I'm more convinced it will be looking up now with the ram looking down towards the track. 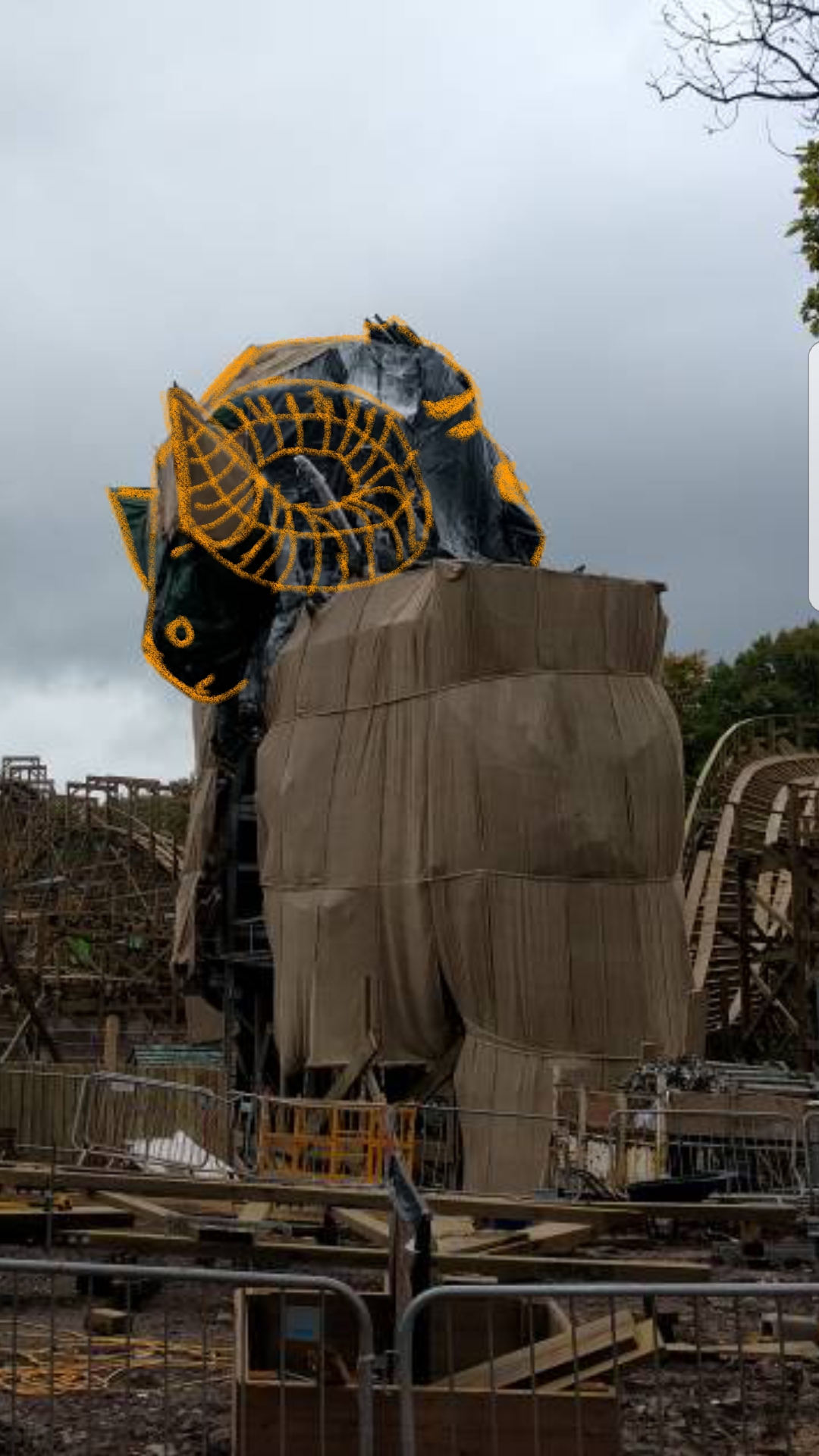 I still think those white wrapped horns and 'Bony' are a clue, the white wrapped horn inside your horn, the more you think it over the more puzzling it gets, maybe instead of emerging from 'Bony' it's inside looking at the riders? Alton teasing us mercilessly with what's still undercover, but then this pic from Theme Park Review (see link) is something else to ponder over and look closely at. And it seems to go through all three sheds, one for storage two for the ride, or maybe even all three for the ride, hmm (gotta be said) I wonder.... (no, I can't do that joke again, even in multiple). Layout looking amazing though and there's still some sections to go in - including after that through the structure (which is obviously Harry Potter characters TM versus charred flume duck with sheep head and 'Wicky' and horse etc etc and shouty flame-y face

Obviously. We know what's under there Alton, no hiding from us enthusiasts, you can't pull the ram's wool over our eyes. We're ahead of you and woodn't want it any other way.) http://www.themeparkreview.com/forum/fi ... 3cef_o.jpg

It is believed that the buildings are Maintenance shed, Station and Pre Show. Other GCI coasters use there maintenance shed as a sort of holding area.
Top

With the very strong rumours surrounding two pre shows, a pre loft section and when the train goes through the maintenance shed, we will probably be in for a very detailed storyline. I’m expecting something very similar to Hex in terms of the overall experience. However, with the discussion of a potential retheme of Mutiny Bay, I don’t think it will happen. Mutiny Bay is a very successful area for families and I doubt Towers would just throw it away. This could mean that it might be part of its own area, like Spinball Whizzer before it became part of The Towers area, and I think there might be a lot more to this area than just a coaster. Like avatar at AK, it is a lot more than just two rides. The current path that leads up to Gloomy Wood and pass SW8 could see some change, and maybe like small details, just speculation, but would be very cool!

Yeah, I have to agree with you, Loakin, about the Mutiny Bay retheme speculation. Personally I love Mutiny Bay as it is. Nice selection of rides, good food and beverage choices, and most importantly, strong theming. I doubt Towers would just throw all this away, for what could be a more obscure theme. I'm actually quite satisfied with SW8 being in Gloomy Wood. I just think it makes sense.

What I don't like about the idea of this being in Gloomy Wood (aside from the entrance being in Mutiny Bay) is that it's theme is dangerously close to that of Dark Forest. When the area consists of one family ride this doesn't have a big impact but to have one of the largest thrill rides in Gloomy Wood, it just sort of feels like it will clash with Th13teen and the Forest.
Life is a roller coaster. You can either scream every time you hit a bump or you can throw your hands up in the air and enjoy it.
Top

I get what you mean, S.J_O'Grady, but theme wise, I still think that SW8 fits reasonably well into Gloomy Wood. I think it's that we're all used to Gloomy Wood being so small and never considered that it could take up any more space than it already occupies. Gloomy Wood at the moment is sort of just a stop off point between two other bigger lands, so it would be nice to see it expanded to become one of the main themed area at Towers.

Just a gentle reminder that any speculation regarding the area in which SW8 will be located can be discussed in its own, dedicated topic

Yeah... it's kinda easy to accidentally merge the discussion between the actual ride and the area it's in.

I feel like SW8/Wickerman will basically be a mixture of Hex and TH13TEEN. I really hope Towers will come through with this one, with the tagline: “World Class Experience” and I really hope it doesn’t end up being a gimmick, like The Smiler.

Loakin wrote:
I feel like SW8/Wickerman will basically be a mixture of Hex and TH13TEEN. I really hope Towers will come through with this one, with the tagline: “World Class Experience” and I really hope it doesn’t end up being a gimmick, like The Smiler.

I definitely see where you're coming from. I think in the past few years rides have certainly become more experience based and parks have been putting a lot more effort into themeing and overall experience in the ride are so I'm definitely in board with that tagline
Top

So it seems the SW8 and Wickerman logo are being projected onto the Towers on the entrance for Hex.

Also I believe the runes say 'Feed the Flames' but I can't make out all the runes so I'm not 100% sure.
[Insert Signature Here]

Maybe we could see a return of the weird Smiler sheep things!
Top

jackf1tz wrote:
Maybe we could see a return of the weird Smiler sheep things!

I can’t imagine we’d see them pull the same stunt, however I expect there’ll be some sort of PR stunt in the run up to or to coincide with the main announcement, given that so far the marketing campaign has followed a similar structure to The Smiler’s with the teasing of the logo and opening of an associated scare maze. Although we perhaps know a little bit more about the attraction than at this point in 2012, due to the progression of SW8’s construction.

Just thinking about this marketing campaign so far compared with the one for the smiler, what do you guys think about the possibility of us getting an app this time and if we did get one, what would it contain?
Top

I imagine an app will be released. They produced an app for Galactica's opening also.
Top

ewoodier82 wrote:
Just thinking about this marketing campaign so far compared with the one for the smiler, what do you guys think about the possibility of us getting an app this time and if we did get one, what would it contain?

We probably will get an app, and if we do, it could be like the app that came out for the smiler where you gain in game currency to make the ride more exciting, maybe leading up to buying the wicker man statue at the end of the game.
Top

Seeing as the train passes through the structure 3 times I googled "3 stages of a ritual" and this page come up.

Here are the 3 stages as described briefly:

The purpose of the separation stage is to acknowledge the problems and difficulties that make change necessary and to recognize the need for a person to separate from their former roles or identities that are interfering with peace. During this stage, there is a request to reframe unwanted change into an intention to change.

This stage is often the turning point for acceptance or rejection of the change that is being offered. Participants are asked to leave behind the familiar and anticipate a new beginning without knowing what a new beginning will require. Old identities are let go while new identities are not yet secured. The transition stage of ceremonies usually focus on educating the participants on ways to navigate the desired change.

The final stage of a therapeutic ritual is the integration or incorporation stage. This stage seeks to instill hope for a future that promises growth. Thus, the ceremony is closed with a sense of renewal and confidence that change can be navigated and that peace will prevail. A symbol is often given that participants can take home with them. They are encouraged to let the symbol act as an inspiration to continue with the change.

The description for The Welcoming: Be Chosen tells about a group of people who hate how we're using all the world's resources & that they are not accustomed to technology and we are invited to celebrate their festival of sorts. To be burned alive is quite barbaric so even though it may be called Wicker Man I don't believe the story will follow us being burned alive as seen in the movie. Fire is usually a represenation of being cleansed I guess. However what if it followed the above quotes and we are being initiated and urged to change our ways of life and become a part of their tribe or whatever. Back to being one with nature. The face could be a representation of Mother Nature herself.

As for the human face I hope it does have an opposite facial piece of an animal as Justin has mentioned. However if it doesn't it may look like this: Earlier today a piece of information was posted in this topic, however due to an external request we have had to remove it temporarily.

I will update this topic with any information as we get it.

Ahhhh, I didn't get to see this. It must be something revealing about the ride! I look forward to when it can get reloaded.

I saw it, but I won't say anything. Lets just say if true, it confirms something big.

Also I do like what Aidan said about the 3 stages. I'd love it if the coaster ran on a 3 train service and each train had one of those themes attached.

Users browsing this forum: No registered users and 207 guests
×