I see where the poster is going but the storyline involves the Beornen who are completely unique to the ride.

Its definitely not an IP, wickermen were popularised by the movie and the song but they have been going on for centuries as part of pagan traditions, it would be like people saying X-Sector is an IP of George orwell's 1984
Reassess your modern lives and ignite your senses.

Alton Towers have just posted a new video about the ride.

That was an informative video that I had been looking forward to, I love how like Hex they took inspiration from the local area
Reassess your modern lives and ignite your senses.

Hopefully if they have a preshow bit they can build atmosphere with that music and that would definitely put me on edge as if I was just about to enter a scare maze.
Reassess your modern lives and ignite your senses.

Wicker Man aims to reconnect riders with the primal essence of rollercoasters as they enjoy a multi-sensory immersive experience, in which they’ll be drawn into the mysterious world of The Beornen. This shadowy group live in the woods around Alton Towers and have built the huge wicker effigy believing that racing through the flaming structure is a ‘rite of passage’. A theatrical pre-show will introduce guests to the Beornen and their plan. They’ll then choose to join the ceremony by taking a ride. The 2000ft wooden track features three passes through the 58ft wicker beast, with special effects creating the illusion that he’s bursting into flames.

This section of the article from Merlin that I have linked, tells us a bit more information. They also slightly touch on some pre-show information without giving a lot away. On top of this, the article basically confirms that special effects will be used on the Wickerman structure, and not actually fire effects which is kind of a downer. I would suggest you read the article, it gives a lot of the story of making the artwork and gives information on the ride.

Quick edit: It seems that this theming structure is called the "Wicker Beast" according to the article. I really like the sound of that name, and happy to see it actually has a name, like Smiler's "The Marmiliser"
Last edited by Dan on Mon Jan 08, 2018 8:13 pm, edited 2 times in total.
Reason: Fixed link

Bert2theSpark wrote:
I love the poster for SW8, However the 'World's First Rollercoaster experience fusing fire and wood' is absolutely hilarious.

Although Twisted Colossus did come out of that.....

In all serious, it's a bit a stretch of the imagination.   Joris en de Draak at eftling comes to mind, which is an amazing dueling wooden coaster. 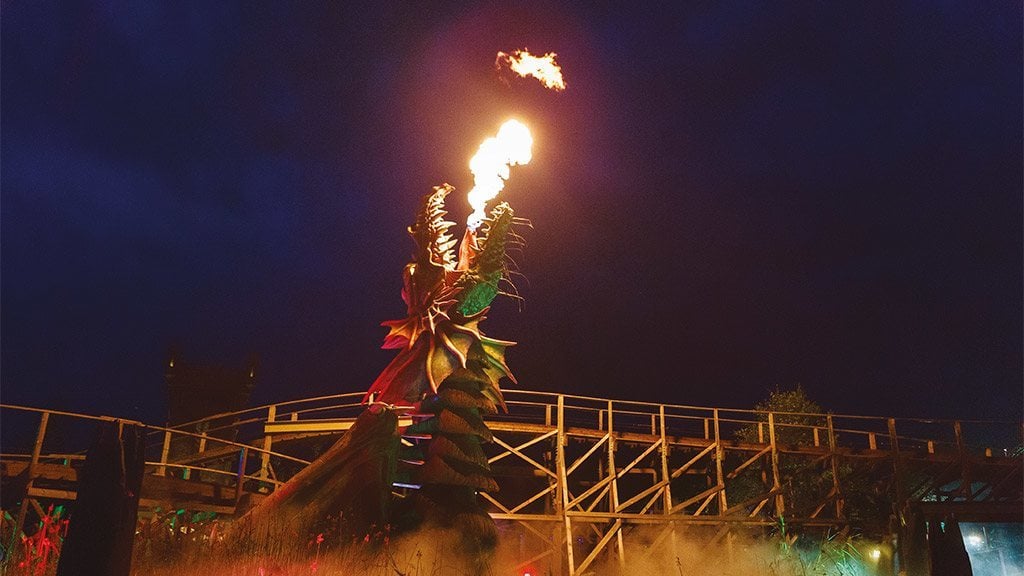 Still I'm genuinely excited for this one.
Top

T0mPr1ce wrote:
Also the head and shoulders are the only parts made of metal - the rest is wood.

While I believe you're right about the head and tops of the shoulders being made of metal, I don't think there's any wood in the theming structure, with the main body instead being made up of timber-themed cladding, as produced by Universal Rocks.

Thats interesting, thank you. I didn't realise this - I was under the impression that Universal Rocks had only produced the faux rock wall.
Top

I'll reserve judgment on the tacky world first tag when I see how they've incorporated everything to do with the attraction. Must admit though when I did read it I made the facial expression of my avatar. Can't fault the promo videos/artwork/snippets of audio apart from the countdown videos.

It'll definitely be a good family attraction and it'll be worth a visit down sometime this year for sure.
Formerly known under username Andy Mc
Top

PhNx Survivor wrote:
Just think.. if this ride is a big hit for families.. what would be the possibility that Thorpe Park would get their own GCI.. or dare I even say RMC.. think I'm getting ahead of myself

My worry is that it suffers from the same awkwardness as Thirteen does. Thirteen's big problem is that it's not an extreme ride but it has a first drop that is amongst the tallest and steepest of rides in the family coaster bracket. You see a lot of people who love the minetrain, see that first drop through the trees (where you can't even see where it smooths out) and it makes them too intimidated to ride.
That said, The Wickerman's drop isn't as high, doesn't look as steep and is banked so maybe it won't have that intimidation factor that gives it a weird restricted audience.
Top

I honestly think people need to remember the worlds first is literally a marketing thing here and should not be a factor to judge the ride on. Based on how others who are actively involved with designing and building this are avoiding mentioning a world first it’s sage to say the experience has been put first!

Liam.W wrote:
Alton Towers have just posted a new video about the ride.

If my ears do not deceive me, that main instrument we hear is a hurdy gurdy. As a huge fan of folk/celtic music and the various instruments used in the genre (the weirder the better), it's one of my fave instruments. Screw all this "world's first coaster to fuse wood and fire", should've gone for "world's first coaster to use a hurdy gurdy in the soundtrack"! That would've got my attention way more for sure

Loakin wrote:
This section of the article from Merlin that I have linked, tells us a bit more information. They also slightly touch on some pre-show information without giving a lot away. On top of this, the article basically confirms that special effects will be used on the Wickerman structure, and not actually fire effects which is kind of a downer. I would suggest you read the article, it gives a lot of the story of making the artwork and gives information on the ride.

Quick edit: It seems that this theming structure is called the "Wicker Beast" according to the article. I really like the sound of that name, and happy to see it actually has a name, like Smiler's "The Marmiliser"

Looking at how it's worded, I'm pretty sure they're only describing it as a "wicker beast", not naming it. The article refers to it in a number of ways, "wicker effigy", "flaming structure"... If it was capitalised there might be something in it, but since it isn't, I highly doubt it's the name. In fact I highly doubt it'll even have a separate name. Everywhere else (including official media) is just referring to it as the "Wicker Man", and the GP are unlikely to latch on to an alternative name, everyone's just gonna end up calling it the Wicker Man.
The bit about "special effects" is more interesting though. Does indeed make it sound like there won't be real flames. But that would make the whole "world's first" aspect even MORE pathetic considering there ARE wooden coasters out there with REAL fire effects. I'm really excited for this ride, although, I am more excited about the theme and overall experience. I truly believe Alton Towers have hit the nail on the head with this one!

Personally, I'm really not fussed with the ' World's First' tagline and it can easily be ignored. For me, it is the strong brand, epic visuals and the soundtrack heard in the video posted by Liam.W, above, that make this ride stand out. I also think we've been very lucky to witness the rides construction on a daily basis through the open season. I don't believe we will really get a true sense of the quality and scale of the Wicker Man and what it will bring to the Alton Towers Resort until it opens, although it will be like nothing seen before.

I strongly believe this ride will take one of my Top 3 spots!

It should be a great experience.
Top

SJW wrote:
It should be a great experience.

SJW wrote:
It should be a great experience.

Nor mine if the merch looks as good as all this promo material! The resin for this will be awesome, I'm picturing the wicker man structure with the coaster coming out of it... also I want a poster of that Kyle Lambert artwork. The picture at the bottom the article appears to show him signing some prints...

Also, in the picture at the top of the article, if you look closely at the computer screen you can see what is presumably the original character map for the runic alphabet, and while no new letters are visible, we have some more numbers! (3-7) If only the image was a bit bigger, they're not super clear...

If you check out http://www.towerstimes.co.uk/sw8 then you will find the alphabet so far.

I just realised the new video is called "our new thrill attraction", which is completely branding it wrongly as a thrill ride instead of family.
Top

They would be stupid not to sell posters of the artwork, at minimum I think we’ll see the prints like they’ve done with the other attractions in recent years.

Obviously concept art is heavily embellished, but I think we have a good shot at the fire from the top of the structure being very impresssive. I suspect tunnel effects will be lighting based as it’s too close to the track to use real flames.

Users browsing this forum: No registered users and 163 guests
×