Robert.W wrote:
I think it's quite clear that as things stand, this ride isn't delayed... I'm just worried that with such a large gap in their marketing, apart from the release of their overpriced Photography Box, it's a bit easy to loose interest in the project.

It dosen't help, I don't think, that the last we really heard of the ride was of a video that really underwhelmed many people who saw, and I would have thought more marketing since then to try and appeal to anyone who might have been put off by the testing video, would have been a good strategy to have.

I think we have to consider that the testing video was shot at presumably at a very early stage of testing. We don't know when Wicker Man started officially testing but I expect that run was very early. It was in cold winter weather, the wheels were new, the track's new. there are a lot of factors that can slow a ride down in testing especially in winter.

In John Wardley's autobiography he speaks of Vampire’s first ever (secret) test run going slow and stalling because of inadequate weighting but also because it was the first test run. He states: "once a rollercoaster is fully run-in it is perfectly capable of getting round the track empty and without passengers. But for the first run in cold weather, when everything is new and the wheel-bearings are stiff, extra weight is needed to give the train added momentum.".

Do take that video with a pinch of salt.
Top

I understand perfectly well that factors that can influence the speed of the coaster during the testing stages, but not everyone who did see the video will. My point was that anyone who had seen the video and was disappointed by what's it showed, because they didn't understand the possible reasons on why it was slow, may have been given a bad impression of the ride.

All I'm saying is that I would have thought the obvious thing to do would be to release more info since then to try and convince anyone who was put off by the testing video that it will be a good ride.

My original point, which I think was taken way out of context, was that it would have been nice if Towers had released some more marketing material recently as it's been a bit quiet and not giving us enthusiasts much to discuss. My comment of the testing video was just to emphasise the reasons why I think it'd benefit Alton release more info.

Attraction Images have been up in the air again and posted some new aerial photos.

The first is a close up of the area around the station and lift hill which shows work is still ongoing in and around the small building next to the Wicker Man structure. The second is of Mutiny Bay and shows a bus and what appears to be a mobile catering stand. The third is an overview of the Wicker Man site and Mutiny Bay (the original photo from which the first two have been zoomed in from). From looking at the Courtyard, it appears as though The Welcoming scare maze is finally being dismantled.

According to comments on Twitter, the bus and adjoining catering stand are related to the filming of the TV advert for Wicker Man, but this is not confirmed. 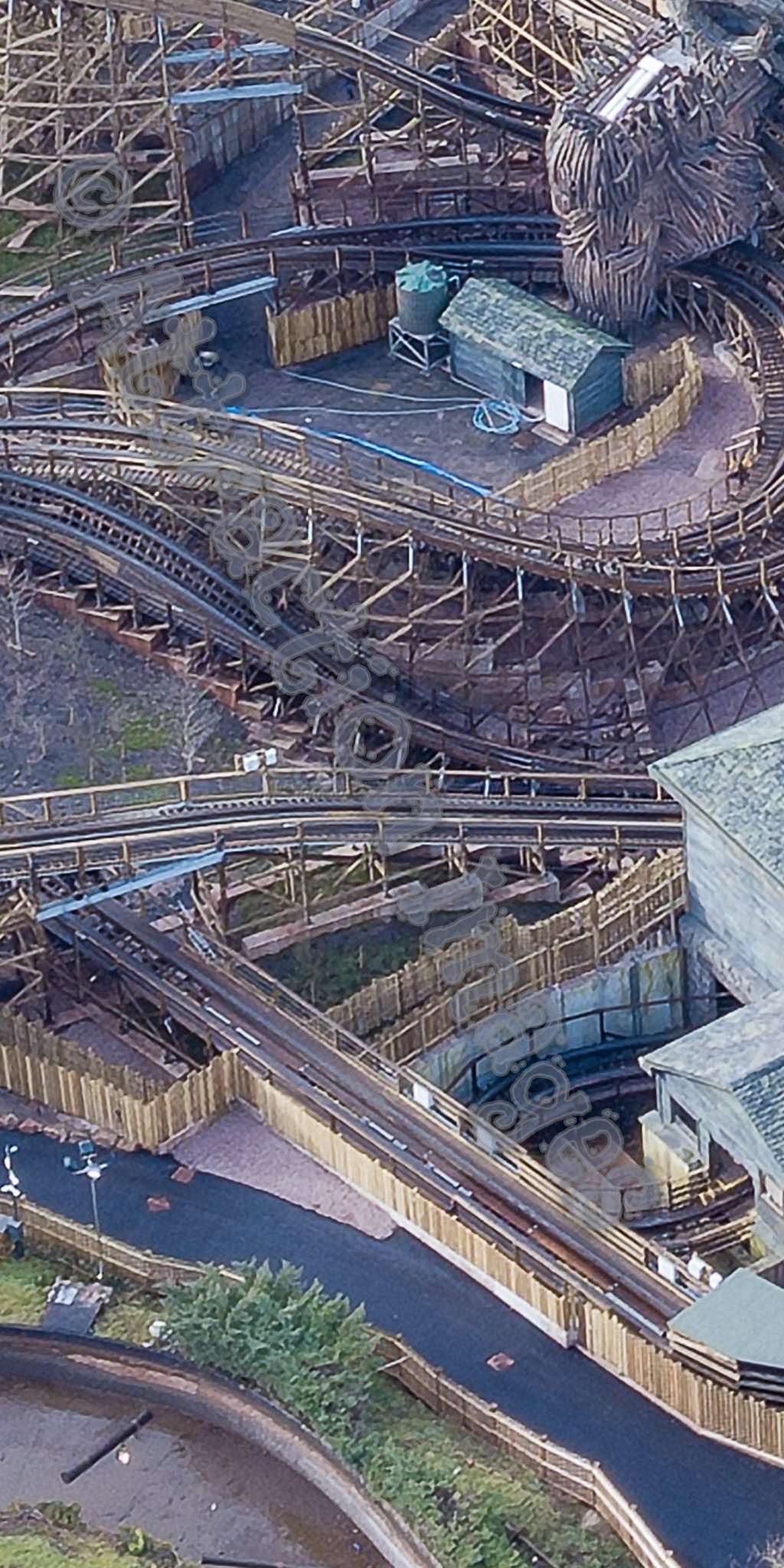 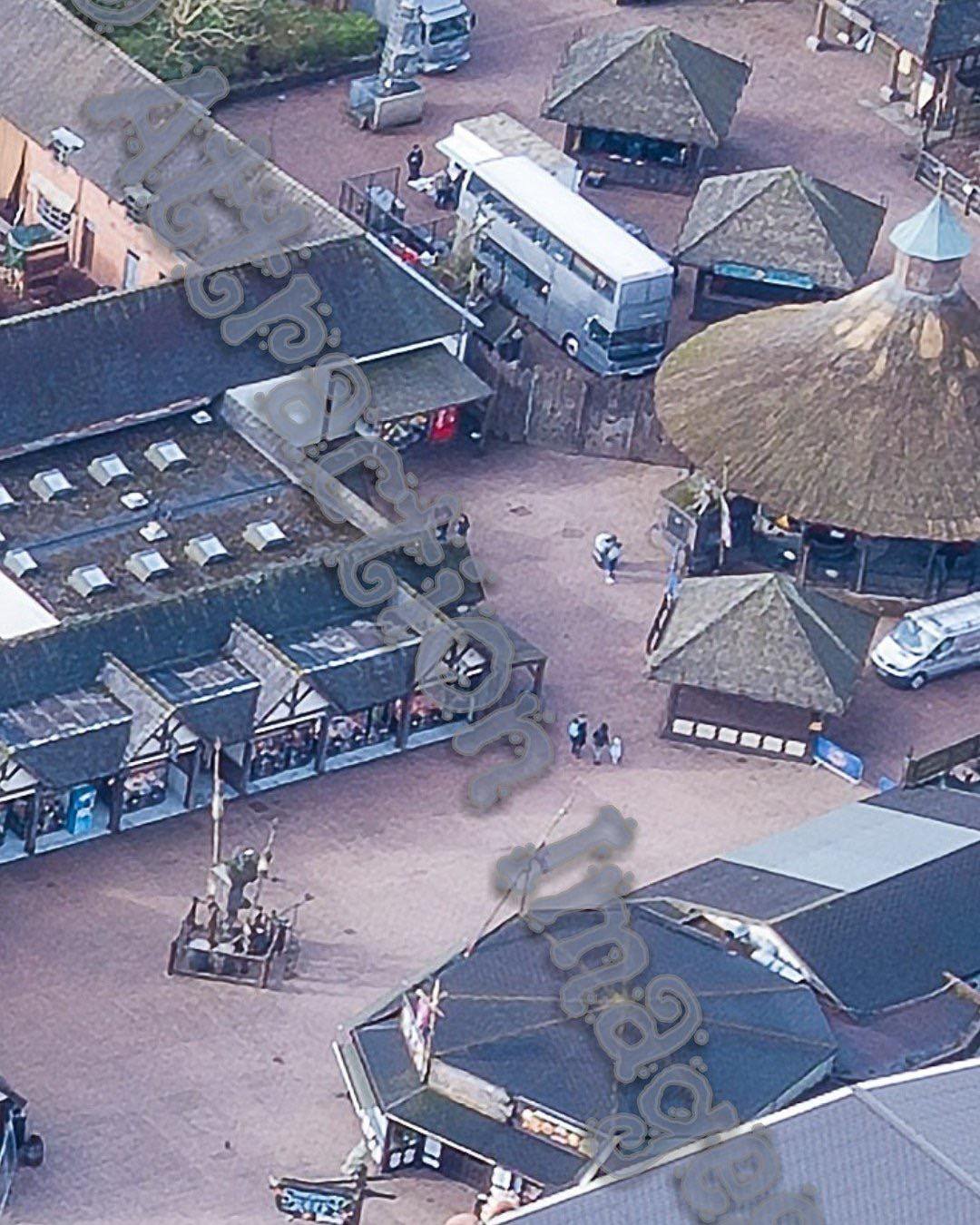 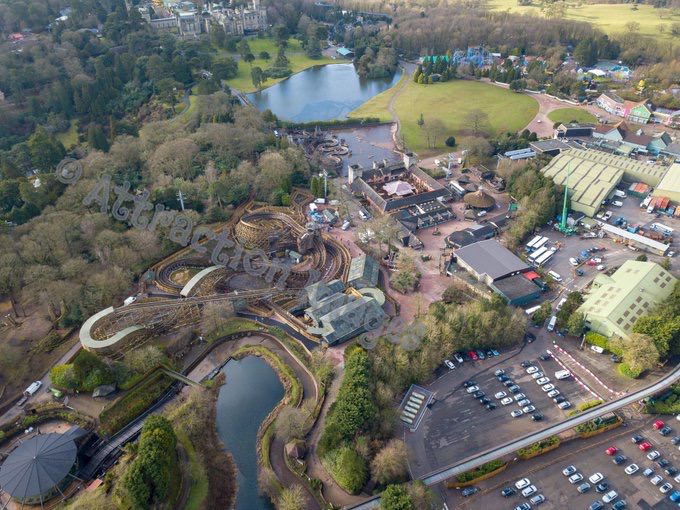 The outbuilding near the Wicker Man structure looks like an old farm building, similar to a pig pen. It makes me wonder if that is a water tower next to it?

I also wonder if they left The Welcoming up in case of any unforseen delays, similar to The Smiler. I honesty thought it would reopen after the amount of time passed with nothing being done.

Looks like the tarmac on the Katanga Canyon path running behind the maintenance building has been all removed. A bricked path will look so much better. I'm not sure, but it looks like some theming has been applied to the concrete walls on the first turn out of the station. It doesn't look much but at least it's something - hopefully there's more to come.
Top

These appeared in the Stoke Sentinel...

Oh wow! Just wow! How magnificent does that look!?!

This is going to look amazing at Scarefest but it's a real shame the smoke won't be present on the actual ride as it gives a great atmosphere around the Wicker Man. I'm assuming the smoke machines were purely for the promo photos anyway.
Formerly known under username Andy Mc
Top

Those images look fantastic. A real look at how this ride will look in the late nights. Very impressive stuff indeed. I could see the smoke still being used for the ride (not as much maybe as shown in these pictures) but if they were to create fake fire this could be used for that with the right lighting. Overall it's extremely impressive. Let's hope the ride itself is just as good as the images

Whilst the photos are nice, and the structure looks brilliant! Im really disappointed in the lack of effects on the images. It’s hardly ‘bursting into flames’ I can only see the two small flame effects on the shoulders and that’s it? Nothing at all in the chest area? Hoping this is literally a teaser and that we get some spectacular fake flame effects to engulf it when the train is on circuit. Maybe this will be it’s standard effects rate for all day long? Then when train passes through we get a big burst out the shoulders and a loaddddd of fake flame effects in the chest area to make us feel like it really is erupting? Anyone else have any info or ideas/thoughts
Top

demz_4 wrote:
Whilst the photos are nice, and the structure looks brilliant! Im really disappointed in the lack of effects on the images. It’s hardly ‘bursting into flames’ I can only see the two small flame effects on the shoulders and that’s it? Nothing at all in the chest area? Hoping this is literally a teaser and that we get some spectacular fake flame effects to engulf it when the train is on circuit. Maybe this will be it’s standard effects rate for all day long? Then when train passes through we get a big burst out the shoulders and a loaddddd of fake flame effects in the chest area to make us feel like it really is erupting? Anyone else have any info or ideas/thoughts

Agree that the images look good but the reason is because it is twilight. Will it look as good in the summer? I can't wait for the opening but i am not buying into the marketing images so far.. Hopefully we will get to see the ride in full flow on the upcoming advert (if the that is what the bus is for.. Bit late to be filming an advert with only 4 weeks to get it edited and played on tv)
Top

Regardless of those images depicting the Wickerman “bursting into flames” or not, you can’t deny that those images are bloody impressive. At long last, a first class themed coaster is on our hands. I’m excited!
Top

I think the ride will look absolutely stunning in the day or not. I don't think they're showing everything off yet in terms of fire, either. But even if it is just that it looks stunning in my opinion. Even if it does look better at night or on a dark evening, it will still look stunning during the day with the fire and possibility of fog

It looks really fantastic, however I'm sure it will not be quite as impressive in the day, that remains to be seen though. Apparently the fog is there temporarily while they shoot promotional material.

I am getting quite excited to experience Wicker Man now, we've certainly got a great year on our hands with this and ICON.

Also, the press release today states that there will be 2 trains, whilst at Scaremazing it was said that there would be 3. Anybody know anything more?
SeaWorld has rescued over 35,000 animals in need![/i]
Top

I'd think that's a mix up. This ride running two trains would be a capacity nightmare in many ways

It's worded quite bizarrely and somewhat ambiguously in the press release:

Every ride will house 2 trains, each made up of 6 wooden carriages carrying 12 passengers (24 passengers per ride)

Given that, it could well be some sort of mix up, as Jack says.

I believe it means two trains will be out on the circuit with one in the station, but god only knows.
Top

Is that right?? Sure that's a mix up right there?

And that wording is confusing as hell.. whoever wrote that needs a slap.
“A surprise to be sure, but a welcome one”
Top

Wicker Man is looking brilliant! Even if the fog is just there for the promotional pictures, the fire effects are very impressive, and I'm sure it will look really good in the daytime as well!

Just saw the new pictures on twitter, really looks amazing can't wait to see what it looks like running and of course the trains
Top
Post Reply

Users browsing this forum: No registered users and 253 guests
×