These are two british inverted coasters and in my mind both of them are world class coasters however the main contrast between the two coasters is the outstanding and tightness that Nemesis allow the riders to experience, whilst on the odysse the speed and the endless amount of inversions and scale of the rollercoaster are the elements that make's this ride spectacular.

Topics to debate about!
-Even though Nemesis is not as Tall, Fast and Expensive what makes it a more popular and thrilling coaster?
-If the odyssey had theming like Nemesis's would it be the worls Number one Coaster?
-Which coaster would you prefer to ride if it was your last rollercoaster this year?
http://www.youtube.com/user/wokawoo10 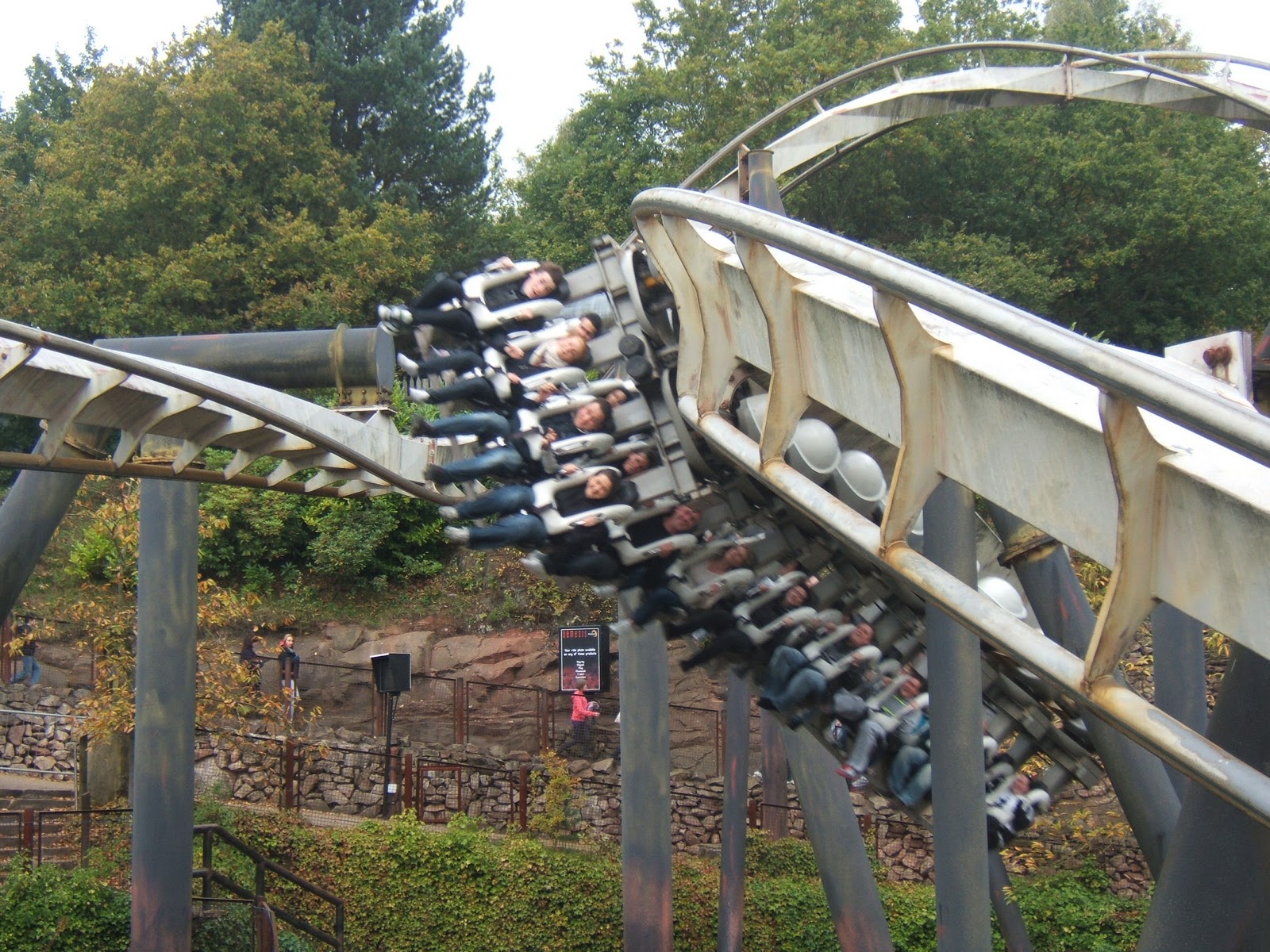 Having ridden Nemesis two weeks ago and ridden Jubilee Odyssey yesterday, both experiences are fresh in my mind.

There are many other reasons Nemesis is better, such as theme, landscape and throughput.

Nemesis. An artful craft derived from the mind of the designer who brought us the Flyer and Dive Machine and thought out how to place such an immense, smooth, perfectly paced coaster in such a tightly confined space full of engineering challenges and topographical nightmares. Still regarded by many, even after a valiant 18 years as the world's best roller coaster.

Oddessy. They plonked it there, gave it a name and sometimes it can't even get around its own course.

Nemesis is special. If you want a huge invert, Alpengeist and Montu are hundreds of times better. And to answer your point about theming on Oddessy and its chances of being the worlds greatest, you could build a volcano around it it would still be worse than the big B&M inverts, ie. Alpengeist, Montu, Pyrenees etc.
THC selectively targets and destroys tumor cells while leaving healthy cells unscathed. Conventional chemotherapy drugs, by contrast, are highly toxic; they indiscriminately damage the brain and body.

I haven’t been on Jubilee Odyssey however I can tell you hands down that there is no competition. Nemesis is a world class ride that is frequently ranked one of the best in the world. Jubilee Odyssey may be a decent coaster but it’s not world class. It’s not even that well known in Brittan. Despite Fantasy Island not being too far away from where I live I haven’t had any desire to visit just for two reasonably good Vekoma’s and neither do I know anyone else locally who has been there.

That’s as far as I can compare the two without actually riding them both. I will note that I have heard decent things about the ride it’s just not in the same league as Nemesis even if we ignore Nemesis’s amazing landscaping and theme.

Jubilee Odyssey is an incredible ride that too few people have experienced. I used to rate it above Nemesis but it is a little too lumbering through some elements and rather rough. The first drop is incredible and unique in this country for being so high on an inverted ride.

But Nemesis is just brilliantly intense, close to rock and water. It's sensational on the front and back rows for different reasons - it just about shaves it.
Top

I went to the Butlins Skegness, just so I could try this ride! I can tell you, it does not disappoint but the theme and atmosphere around it does! Its an incredibly expensive coaster to ride, and to build to start with! Although it is great, and would happily ride it again and again!
But you cannot compare with Nemesis, its a shame its not as long as Jubilee!
Top

When I visited it was a Saturday in late September last year and it wasn't open due to "High Winds" even though it was 22 degrees and very little wind, does anyone know whay it cost £28 Million to build, considering rides like the Swarm only cost £20 Million, all I can come up with it the rides location is not easily accessible suggesting a lot of the cost was shipping the coaster pieces to site.
Top

^Sheer size, while Swarm is 2543 ft long, Odyssey is over 2900. Supports are also hugely used on Odyssey while Swarm is minimal. This is because a seaside location is more testing on a structure than inland. Also, thicker supports are needed on a taller, faster coaster. Simply sheer size.
THC selectively targets and destroys tumor cells while leaving healthy cells unscathed. Conventional chemotherapy drugs, by contrast, are highly toxic; they indiscriminately damage the brain and body.

Having ridden both of these many many times there is no contest that nemesis is a better coaster.  Odyssey is average at best, it may have some novelty factor in the uk due to its size as an inverter but when you compare it to the larger b&m inverters like montu or alpengeist it doesn't even come close in terms of ride comfort, intensity and reliability.
Top

I also read that the cobra roll and horseshoe turns had to be lowered to prevent stalling at the cost of Fantasy Island, surely that's Vekoma's problem unless Fantasy island insisted on those elements being as big as they were.
Top

It happens with many Vekoma coasters Cobras, add wind to it something had to be done. Simple miscalculations on Vekoma, however FI likely signed a contract clause forcing Vekomas problem with it to them, same with Kings Island's I305 reprofiling, happens all the time.
THC selectively targets and destroys tumor cells while leaving healthy cells unscathed. Conventional chemotherapy drugs, by contrast, are highly toxic; they indiscriminately damage the brain and body.

Interesting fact, Jubilee Odyssey runs on Methane gas to powers the lift hill, and thats actually the main reason for the £28 million price.

Still, without that it is £24 mil, darn expensive for an SLC...
THC selectively targets and destroys tumor cells while leaving healthy cells unscathed. Conventional chemotherapy drugs, by contrast, are highly toxic; they indiscriminately damage the brain and body.

How can you say nemesis wins hands down when you haven't been on jubilee. (nightfall) have attended both' nemesis takes second Prize.
Let vintage cars rust in peace
Top

Hibscasual wrote:
How can you say nemesis wins hands down when you haven't been on jubilee. (nightfall) have attended both' nemesis takes second Prize.

Simple, as I said above Nemesis is world renown and Jubilee Odyssey isn't. I didn't just post that without doing my research, I've heard many reviews and as you'll notice most the people who posted above  confirmed with what I said. I'm not saying it doesn't have its fans but at least 9 out of 10 people seem to prefer Nemesis, hence it wins hands down. I don't have to have personally been on it to know that.

To pass such judgement on hearsay is immature and naive at best .I have been on both and nemesis lost. It's only my opinion and I have experienced both.
Let vintage cars rust in peace
Top

Did I pass judgement?

I made it very clear that I hadn't been on the ride. All I said was that Nemesis will win hands down.

Not only hands down, but win like Chelsea FC vs Drunkie the Bear.
THC selectively targets and destroys tumor cells while leaving healthy cells unscathed. Conventional chemotherapy drugs, by contrast, are highly toxic; they indiscriminately damage the brain and body.

Users browsing this forum: No registered users and 176 guests