Rapids fill to the brim with water 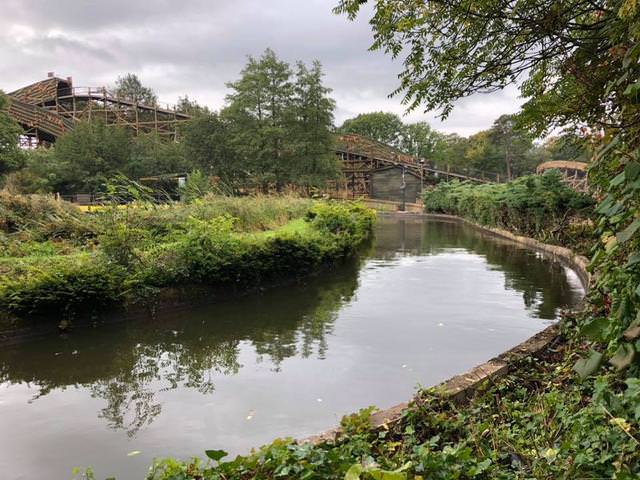 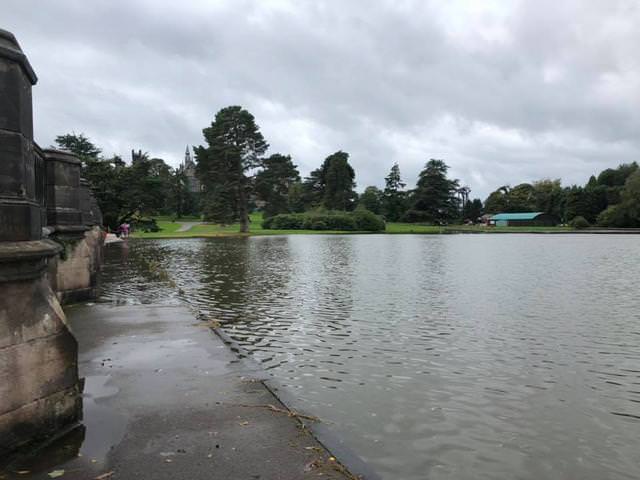 Fishul wrote:
Anyone got any idea what's up with Nemesis? Apparently it's ceased operation for the foreseeable future, is it something to do with the rain?

I was there on 13th September and Nemesis was shut until very late afternoon, only got one ride, no explanation though.

A picture has also been seen with a pump close to Nemesis and the car park.

by ROYJESS
Here is that pic (taken from TS FB) 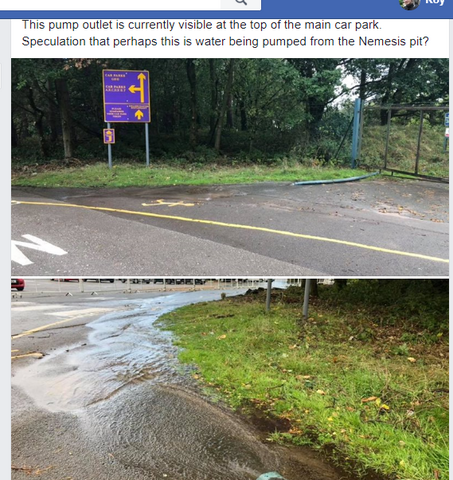 by Ismail
I wonder how other areas of the park held up. The pictures of the lake and rapids look mad. It would have been cool to see how much water was actually in the Nemesis pit.

by Doublethink
Pit is looking fine now, Nemmy was running well when I went on Sunday.

by Black Hole
I went last Thursday and Friday and the staff member said we would get very wet if they opened it up. Fair enough really - horrendous weather!

by Ismail
Imagine being dipped into water

by MakoMania
My 8th visit of the season and it's the 8th time that Wicker Man has failed to open for ERT.

by jeremy.burnell
Had a look on the Alton Towers crowd calender and decided to head up on Friday 5th October as a solo visit. With Scarefest happening on the 6th and 7th and no schools off, I'm hoping it will be really quiet. Any thoughts?

MakoMania wrote:
My 8th visit of the season and it's the 8th time that Wicker Man has failed to open for ERT.

This is quite sad. I struggle to believe it's due to it being a new ride anymore, as both its systems and the procedures required for the daily checks should be pretty well sorted and understood by now. Assuming it's not breaking each and every day, my guess would be there's a resources issue on tech services. Either simply not enough of them or they're not able to start early enough to get everything done.

In a separate thought: single rider queues. I really don't buy the Merlin excuse of "guest abuse of the system", when it works at many other parks across the world. But if we take them at their word that too many people were filling the line and they couldn't cope, then they should simply do what Phantasialand does. Watching them operate Taron, they limited the number of people allowed into the single rider queue at any point in time. When the single rider queue got too long, they simply closed it up for a short period until it was cleared.

But of course Phantasialand has a member of staff at the entrance of that ride, whilst Merlin parks now have a QR code to scan for purchasing fast passes in the greeters spot.

by MakoMania
On a positive note, the park is being operated fairly well today, only ride not on full capacity is Galactica which has an issue with one of its trains. Hopefully it's back on 3 trains & 2 stations by next weekend!

jeremy.burnell wrote:
Had a look on the Alton Towers crowd calender and decided to head up on Friday 5th October as a solo visit. With Scarefest happening on the 6th and 7th and no schools off, I'm hoping it will be really quiet. Any thoughts?

I've gone to theme parks on my own many times and I often bump into people that go solo.
I can't say whether the Friday will be quiet or not, but should be quieter than the weekend, but you will have less hours than the weekend.

by Ladyofthelake
Alton Towers has been announced as a finalist in the 'Best Family Theme Park' category of the Family Traveller Awards!

It is now down to a public vote to decide the winner. If you want to help Alton Towers win, simply go to the Family Traveller Website and cast your vote. Each person who votes will also get the chance to win a holiday to Turkey's Lycian Coast thanks to Family Traveller magazine. Voting closes on 2nd November 2018.

Winners wil be announced at the end of November

by ThemeParkEwan
Just seen that charlie and the chocolate factory has been added back onto ridetimes.... pretty interesting, obviously its not returning though so it seems a little strange.

by Liam.W
Make sure you aren't reading it wrong as you might have gotten mistaken with Charlie and Lola. I've just checked ridetimes and CATCF is not there.

Liam.W wrote:
Make sure you aren't reading it wrong as you might have gotten mistaken with Charlie and Lola. I've just checked ridetimes and CATCF is not there.

You're right aswell xD my phone only shows it as "Charlie An....." i completely forgot charlie and lola existed to be fair!

by AltonOperator
I left a very negative review here in May so I thought I'd update it after my trip on the 21st-22nd October
Overall the park was fantastic.

Lighting
I haven't been to Scarefest since 2013 so I'm glad to see that the horrible floods have been replaced with the LEDs with coloured gel filters. Lighting is vital for a night time event so its nice to see them putting a bit of effort in. The park was covered in a yellow rope light with white leds every metre or so. They're absolutely everywhere and I personally didn't mind them but it would have been nice of they were a little more ambient.
Wickerman, however, was lit beautifully with the red leds along with the large fire dome things in the centre. Another small detail was some of the large led fixtures were actually flickering between red and orange giving a lovely fire effect.
The station of wickerman had some quite amusing fixtures too. They're using moving heads in the rafters of the stations with gobos but I've never actually seen them move. They're often several hundreds of pounds each and the exact same effect could be achieved with a light a fraction of the price!
Spoiler: show 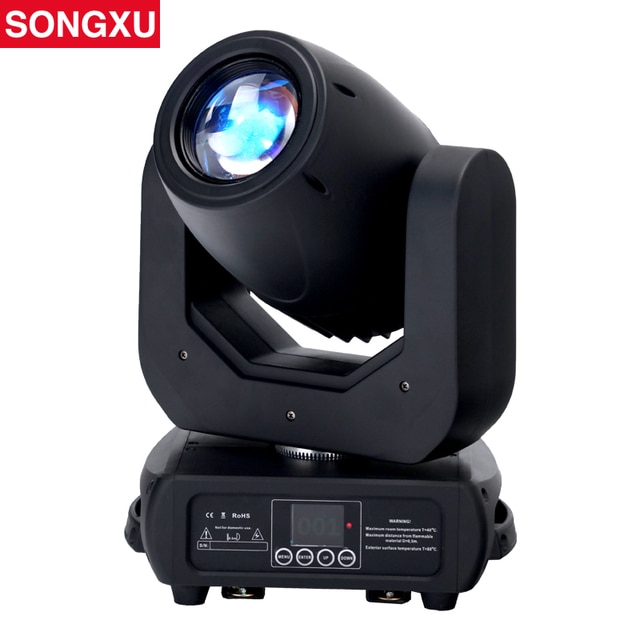 Queues
We did very well with the rides. We managed a decent amount of rides without using any kind of passes. On the Monday between 10 and 11am we did Rita x2 and Thirteen x3 all as walk on. it seems that the first hour is perfect for DF and then running round to FV is the next step. Under 20mins for Nemmie and GalacticAir.
I went into detail on how disappointed I was with the ride times system last time and I'm happy to report that they are now being used very effectively. Only once or twice was the queue over the estimate. On CRR the queue said 25mins and we reached the platform in 25:16. Most rides actually overestimated times which was a lovely surprise. Its important to get a nice balance between overestimating to please the guest when they finish and not going too high so people perceive the park to have ridiculous queues. I'm so pleased they've sorted it because I don't mind waiting 80mins as long as I know before hand.
Also we arrived at the entrance at around 9.50 and we managed to pick up tickets and be in the park by 10. Impressive compared to the sham in May.

Sorry it was a bit long. I had a brilliant time but it was a shame I couldn't see you all for the event.

Nemesis not available until the afternoon, half the rides were not even open on time at 10.  Galactica VR not working at all.

The batching really confuses me in Wickerman and I don't see how the guy right at the back is supposed to see everything going on with such a narrow walkway, I was in a group of 3 yesterday, was told to go to rows 1 and 2 (first time!),  then realised the number of people in front of us meant we were not on the same train, no one able to just quickly re-jig the order for us before or after because of their groups.  Decided screw it, I'm waiting for the front row then if I've been screwed over.

They really need to send less people into the pre-show and move that fence back a bit with just one queue leading into the opening doors, no one has any clue who is with who and will end up separating groups!   Not that being first out the pen means you are going to be sent to row 1/2 at all.

RE: The moving heads, I suspect it's purely for the Gobo (pattern) effect that they use, that's common to those.

Smoking was happening in queues quite blatantly, I also had individuals push through queue to catch up, even on Duel!

I really do like the atmospheric, string LED lights they are using through the Kanyon, I just wish they would get rid of temporary generator flood lights entirely!

I find myself frustrated at the lack food options, I miss the breakfast they used to do, even the grill doesn't offer steak anymore!  The Cafe on towers street, if you are going to serve "Costa" coffee out of automated machines at £3+ for a latte, you might as well reduce the price and make it self service!  I've had decent service station Costa coffee, this was awful, not idea what Milk they are using.
All times are UTC
Page 131 of 146
Powered by phpBB® Forum Software © phpBB Limited
https://www.phpbb.com/