Two carriages on the Smiler ride at UK's Alton Towers collide. No confirmation yet on whether there are injuries. 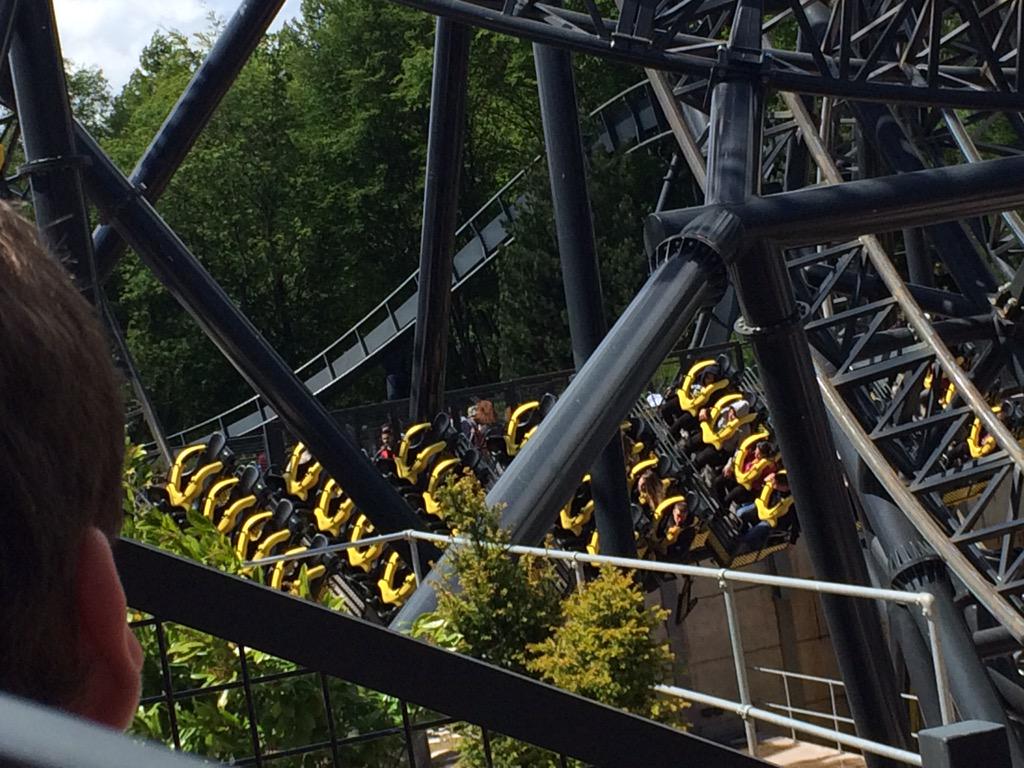 Oh dear.
Hope they are ok........this aint gonna do the park any favours.
Top

Ok I thought very little of the smiler when the bolt fell then the guide wheels. This is just shocking. The ride should never have allowed 2 trains on 1 block. The train should never have stalled. This is a very serious problem with it.
Top

Oh dear! This isn't good! I hope the people onboard will recover

But this won't help Alton, The Smiler will have to remain down for a while now I reckon and the staff operating will get in serious trouble

Sky news is saying 4 serious injuries but I will believe it in a few hours when they get them down.
Top

As above: Not gonna do AT any good. Hopefully wont affect my visit this year

Hope everyone is OK?

Floor of one of the cars has buckled..

How can that happen? Surely if the train in front is empty they would of been testing and wouldn't let another one go?
Top

Wow! Massive failure of the ride systems and the ride ops. Hope all that are involved are ok and well. H&S are going to be all over this, Smiler may be closed for quite awhile whilst they investigate what happened.
Top

There are systems in place to prevent exactly this. They clearly are not up to the job and Gerst need to check all of their rides. That's 2 trains that will be out of action for ages. The ride needs some serious work.
Top

Explain exactly why this was bound to happen? Or did you just pull this comment out of your backside? Think before you post such mindless comments. This is why i hardly post on this site because of wild and sometimes childlike posts.

Explain exactly why this was bound to happen?

I recollect wheels on the v.lift hitting guests and bolts falling off / random bits of metal. A major incident was bound to happen is all I'm saying it was merely a case of when.
Formerly known under username Andy Mc
Top

This must have been a PLC fault, the only thing the ride ops could have done is E-Stop but the ride system should of done this it's self.
Top

Explain exactly why this was bound to happen?

I recollect wheels on the v.lift hitting guests and bolts falling off / random bits of metal. A major incident was bound to happen is all I'm saying it was merely a case of when.

I recollect these incidents also which have been rectified since, but by saying something else was bound to happen is a little bit over the top anything could happen to any ride at anytime, so you could say that about any ride operated around the world which is silly in my opinon.
Top

This really says something about Gerst's ride construction. I always found it strange that their rides encountered so many problems (Basing off my own experience - I don't think I've been to thorpe park once without Saw breaking down) and now I wonder as to what irresponsible development in the design has allowed for two trains to be on the same block of track at the same time... shouldn't the computers/sensors have stopped this... and if not then shouldn't the ride ops have noticed a train had stalled and force-stopped the other one before it crested the lift hill?!!! I fear there are a lot of questions to answer.

Four seriously injured so far according to the Beeb - http://www.bbc.co.uk/news/uk-32980354 - Let us hope dearly these do not extend to deaths at-all and that everyone is safely cared for.
Top

It could have happened to any ride but it happened to be the smiler. Stalled multiple times in testing and normal operation. Bolts fell, guide wheels fell off, huge structural problems. This is just what people predicted.
Top

Hmmm from the pictures it look like the car stalled in its usual spot under the knot. You would seriously think they would know better with the amount of times its happened. I think its not fair for to blame the op here though. The ride shouldn't have allowed the cart to pass through to the same block, and even if the most vigilant ride op in the world were working, they would have surely assumed the ride was going to automatically break, but by the time they realised it didn't it would've been to late to do anything.
Top
Locked

Users browsing this forum: No registered users and 284 guests
×