Here is my review of Galactica which I was lucky enough to ride yesterday. Most of this has probably already been said but I thought I'd just do a full review. I have put it into positives and negatives to make it easier to read (and I do like a list).

Positives
-It is a unique experience and I found myself saying "oooooo" during quite a lot of it
-It is very re-rideable as there is a lot to look at which is difficult to take in on just one ride
-There is a lot of potential for different scenes and stories and one of the people working on it mentioned a possible scarefest twist on it
-The photo booth in the queuline is rather exciting. You put your face in a bubble thing and it takes a picture of just your face. It feels very futuristic although it removes the opportunity for a group photo: 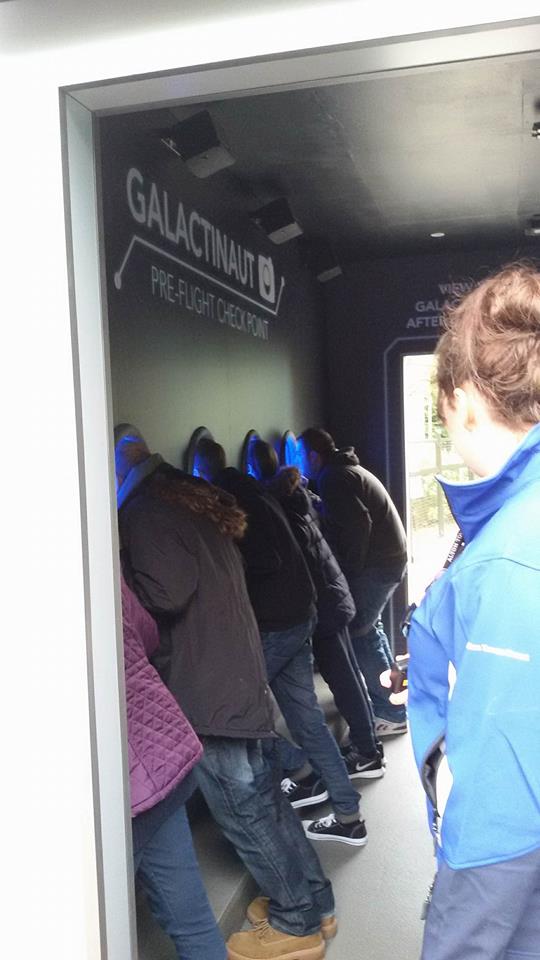 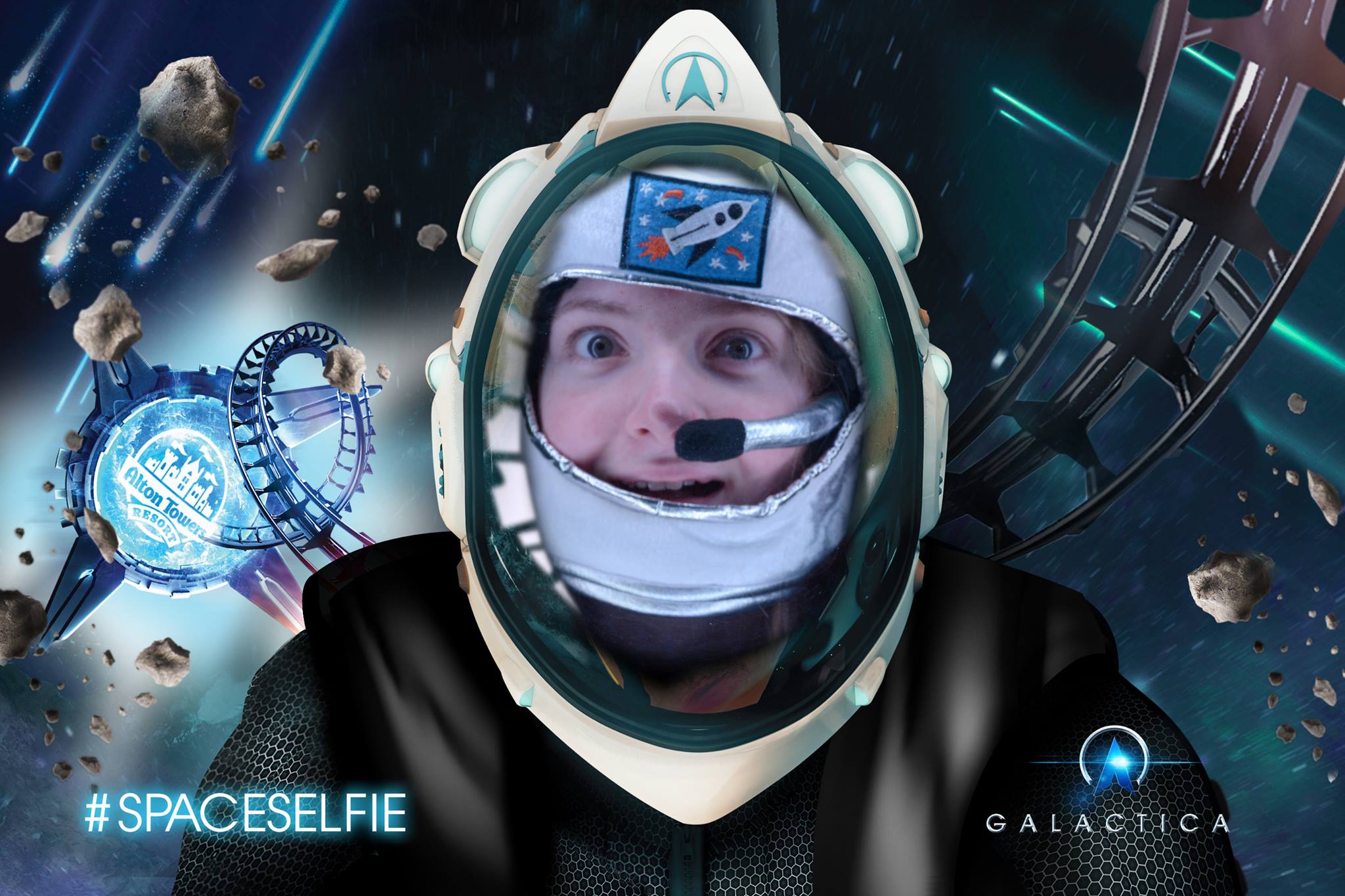 -Hospital-grade sterilising wipes are used to clean the headsets after each ride which puts to rest the worries over hygiene
-The soundtrack is perfect
-The merchandise is very nice so I bought myself a pin badge and blue wristband (there is also a white one): 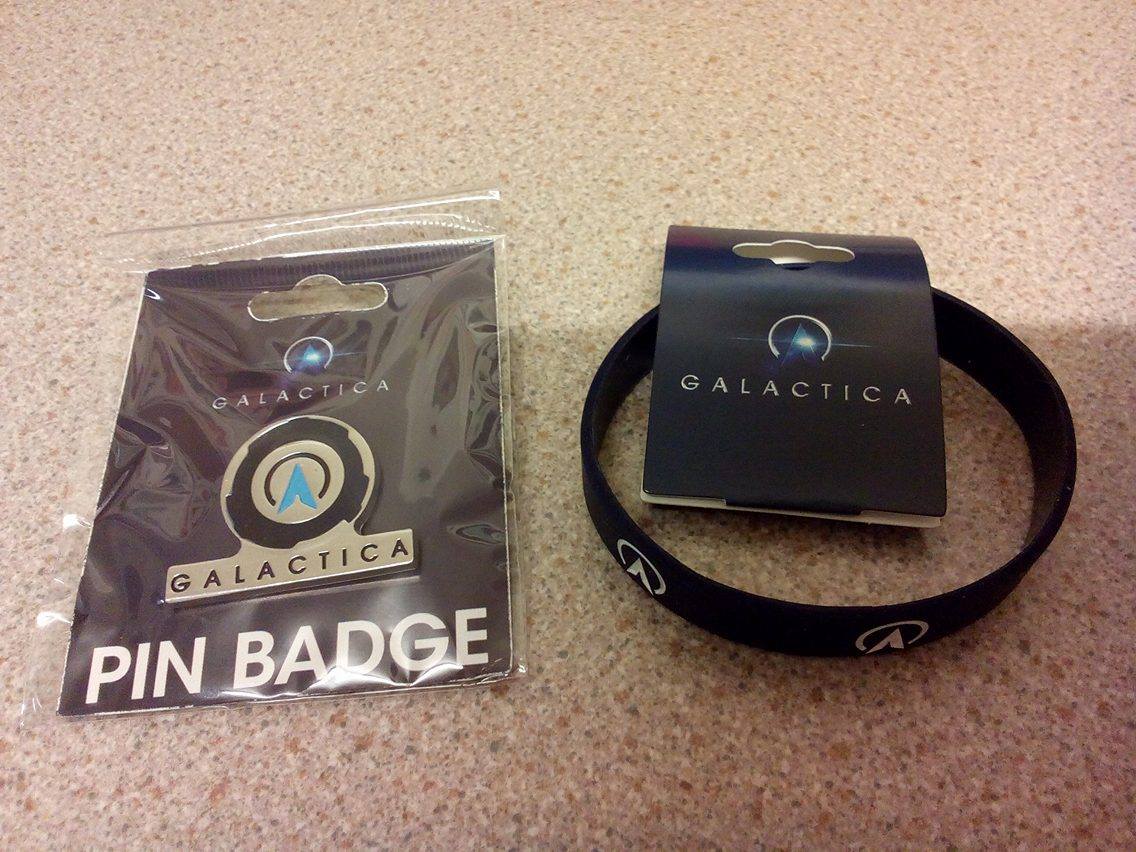 Negatives
-The biggest downside I feel is the graphics. It was difficult for me to fully immerse myself in the scenes as it wasn't focused. There is a focusing wheel on the top of the headset but it didn't seem to do much. You also cannot wear glasses so my dad (who has bad eyesight) could not see very well.
-The VR makes the ride seem shorter and I didn't get the same flying sensation as I did with Air as I was too focused on the VR
-Both my dad and Michelle said the headsets hurt their noses and it felt quite heavy when in the upright sitting position
-As the boarding time has increased, I wouldn't be surprised at there being 3 hour queues

Overall, Galactica is an enjoyable experience, however it would need improvements in order for it to be 'amazing'.

I'm still quite looking forward to it. I'm worried about not being able to wear my glasses though as I can't see a thing without them!
Top

wolfwynd wrote:
I'm still quite looking forward to it. I'm worried about not being able to wear my glasses though as I can't see a thing without them!

I have the exact same problem. Without my glasses, the VR will be blurry and may cause me to feel sick

. Might have to stick to riding without the VR after my first go.
Burniel | Great at theme park knowledge, not so great at designing signatures.
Top

Couldn't you mess with the focusing on the vr headset?

zakwoolley1 wrote:
Couldn't you mess with the focusing on the vr headset?

Possibly, would depend on how much time I had when boarding. Not too experienced with VR headsets.
Burniel | Great at theme park knowledge, not so great at designing signatures.
Top

the standard gear vr does have a slider for focusing, dunno if the version used on this is different though

You can adjust the focus using a wheel located on top of the headset. However, as it has a protective covering over it the wheel can be tricky to locate.

Yeah the focusing wheel is under a velcro flap, took me a second to find

Well I went on it today and found out quite a few things like why the preview tickets went so quick ...... there were only 140 of them

Today they couldn't open for the perview on time we were told it was due to a samsung software update.... even after the rescheduled time of 4pm there we're still delays and tech problems

Is it worth going on yes

Is it worth the cue for over an hr no...
Top

I guess I'll wait until it's quiet until I go on it then. Maybe they'll give me a bit more time to fiddle with things. It may not go well with my Autism though. Hm. I will go on it though, even if it is only once with the head set.
Top

wolfwynd wrote:
I guess I'll wait until it's quiet until I go on it then. Maybe they'll give me a bit more time to fiddle with things. It may not go well with my Autism though. Hm. I will go on it though, even if it is only once with the head set.

Not being able to hear the sound was disapointing to me .... I did tell them that I couldn't hear it after and was told you can have subtitles but wouldn't that stop it feeling as immersive

Here is another nice short video ahead of launch: https://www.youtube.com/watch?v=AeVh1wG6WwU The AR scanner was unlocked on the app yesterday. After having a root around in the app file, it looks as though there are a variety of things to scan, including the 2016 map, the space Alton Towers logo, the Galactica logo, the 'Space Selfie' photos and a few other things which will likely be placed around the ride itself (don't want to reveal everything

Here's also a couple of photos from Towers' social media channels of Galactica at night:

The scanned images are certainly cool! Hope to find out what to scan on site soon as those what you can scan at home are quite nice.

where the heck is the tv advert for this thing?? i thought they were filming a dedicated galactic advert!? can't believe we've not seen it yet with it opening tomorrow?
Top

Towers have said the advert will be shown over the Easter period. It could be that perhaps they want to give the ride and the staff a chance to operate with reasonable crowds, before really pushing it and looking to attract more guests.

Looks lovely at night. Here is a logo above what I'm presuming is the left hand station. 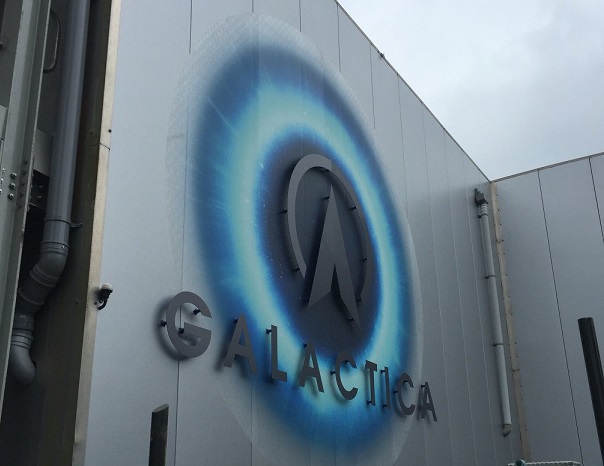 That shot of the portal at night is awesome. So looking forward to seeing it myself....only a week to go

Can't wait to ride this in the dark without the headset, AIR in the dark was already excellent I reckon.
Top
Post Reply