Yeah I've seen a tweet from someone at the park saying it'd be sorted by opening but I'm not 100% convinced.

Reaction seems to be mixed - but generally positive so far - I'd say.

Had a run through yesterday and we both really enjoyed it.

Also surprised that the photo they took at the entrance was a free download.
Just gave us a receipt with the code to enter on the picsolve website.
Top

Not going to go into to much detail on here for now, but WOW! I absolutely love Alton Towers Dungeons! Credit to the Entertainment team for putting on a great show!

After going through it yesterday and today, it is great to see something new in the building once used for Charlie. The sets were great, the costumes were great and the overall package was spectacular, especially only a few shows in!

It felt modern, but in keeping with the Dungeon brand and I thoroughly enjoyed the boat ride section, and loved the effects used. Of course a few little tweaks can be made here and there, but overall it was a 9.5/10!

I feel like I am missing something with The Dungeon. I had friends visit yesterday and recommend it. I visited today and found it to be poor. The acting was good but all the sets felt sparsely decorated. The boat ride felt like if the lights were on it would still be CCF themed it felt so sparse.
Top

I have to be honest and say that, on the whole, I was really impressed with the Dungeon.

There was a good mix of humour and scares, and over the two runs that I had, I thought that the actor quality was very, very good. I believe that the success of a Dungeons attraction relies quite heavily on the strength of the actor, so it was good to see the the actors were up to the mark straight away, especially after the traditional issues that Towers have recruiting actors for.

One gripe for me is that:
Spoiler: show
the corridors between the different rooms are just black MDF walls, which does spoil the immersion somewhat. In other Dungeons that I’ve done, the corridors have been heavily themed, so I was disappointed that Towers have opted for the plain, black look. Hopefully they’ll do something to dress the walls up but I’m not sure what they could do at this stage.

We also had something happen in the final room on our run through yesterday, which I’ll put in spoiler tags for those not wanting to know details:

Spoiler: show
At the end of the finale, where Molly Leigh appears and provides 4 jump scares, she must have misjudged her position in relation to the door she enters/leaves through, or got her timings wrong, as when the lights came back on, she was only just leaving the room, and we all saw her run out

Then we were all sat there for a couple of minutes, before a different actor to the one who tells you the story about Molly Leigh (it should be the same one) entered the room through the door that guests enter through, and delivered the script about your journey through the Dungeon being at an end.

There was a suggestion amongst our group that the actor playing Molly had mis-judged where the hidden door was and ran into the wall, or the two actors had got in each other’s way. If they did come together, I hope that neither of them hurt themselves.

All in all, the Alton Towers Dungeon is a solid addition to the Resort’s line-up, and while I still don’t think it’s what the Resort needs, and I won’t be doing it on every visit, I think it’ll prove popular among guests.

This was my first ever Dungeons attraction and my honest review is...

I was sceptical at first and didn't really think it would be something I'd enjoy but after getting fed up of queuing for rides I thought I'd give it a go. I was very impressed!!! The acting is superb and the black river was good fun!

I went in the Dungeons with Liam, and I was very impressed too! Given this was my first Dungeon I did not has much to go off to prepare, and I must say, I really enjoyed it! I will definitely do it again this season!

I did the Dungeons yesterday.

The photos of the outside do not do it any justice. The exterior certainly looks loads better in person. I loved the Black River ride, best part of the Dungeons and could have been a stand alone free attraction in itself without the rest of the dungeons.

As for the rest of the attraction, great acting and I was very impressed with it. However, it was pretty much a copy and paste of other Dungeon attractions and I still feel that it something that the park don't really need. Like I said above, a free family dark boat ride would have been all that the park really need at the moment.

ps...why me, got pulled out twice, found guilty in the court dock and I had to sit behind that shower curtain.
Top

One of my niggles about the boat ride is...

Spoiler: show
The animatronic that wiggles above your head. Why is it in a boiler suit? It would have been nice to have seen it in period costume.

Alton Towers Resort has released their latest TV advert which features The Alton Towers Dungeon. I do wonder if they will add the flame torches as featured in the still below? 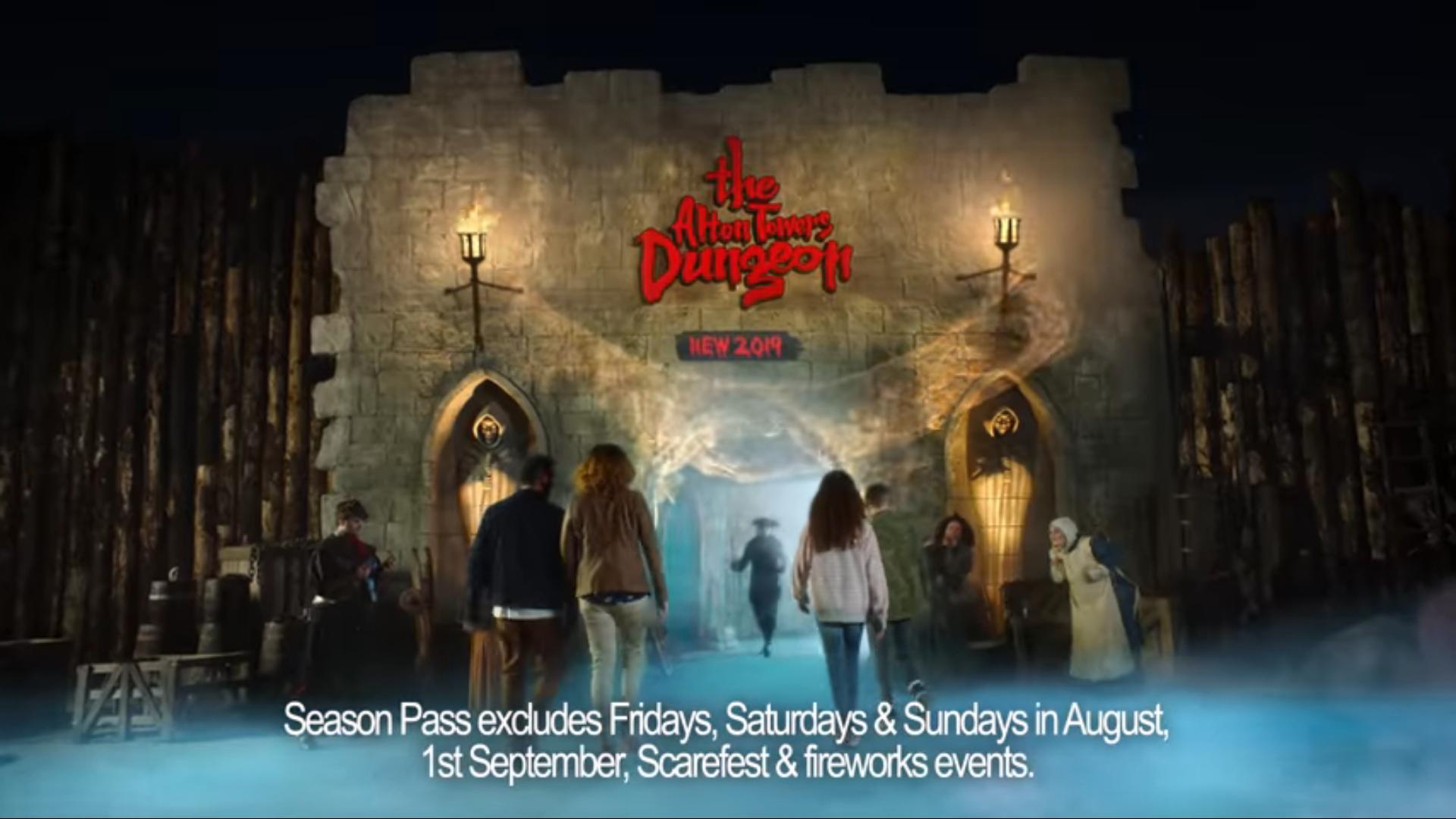 Justin wrote:
Alton Towers Resort has released their latest TV advert which features The Alton Towers Dungeon. I do wonder if they will add the flame torches as featured in the still below?

From what I hear they are going to be installed, however they haven't been yet (evidently) and so we have the temporary ones for now!

I certainly hope they do have permanent flames, It'll also be interesting to see what they do when it comes to Scarefest and fireworks as there is a good opportunity to create a strong atmosphere with audio, lighting and flames.

Right I went on this yesterday and here is my review based on my experience.

Now I have the premium season pass which means that access to the dungeons is free which to be honest is a good thing because if I had to have paid for that I genuinely feel that I would have felt ripped off. Don't get me wrong the actors are top class and really deserve some recognition but I feel the attraction as a whole is just lacking. The black river just looks like a hastily done makeover of the Charlie ride with no real thought put into it which is a shame as I feel they could have done something really special with this part of the attraction. Then whilst the rooms after were well done and they were some what fun the end just felt anti climactic. I have been to the Edinburgh Dungeon and that all builds up the a hang man themed drop tower ride which was a great finale. The Molly Lee part whilst good, just didn't feel like a good climax to the experience. I personally would have moved the drop towers from nemesis sub terra and added them to this attraction to give it that finale that I think that it needs. Its not to say that this is a bad attraction but I feel it is not worth paying extra for in its current form.

I feel like it might be too late to say this, BUT I kinda wish I had ridden Charlie ATCF now.
Top

It's almost as if this could have been predicted:

I'll give it till the end of next year, maximum. Merlin never fail to astound me.
SeaWorld has rescued over 35,000 animals in need![/i]
Top

Anyone with an ounce of common sense could have predicted this was going to happen, so I find this more amusing than anything. What makes it even more amusing is that even when people are being offered free tickets, they still aren’t interested. It seems they would rather go on the rides. Because, you know, that’s why they went to the park in the first place.

Mark my words, this Dungeon will be operating seasonally by the end of this year.
https://gallifreybase.com/gb/members/derpyquark.88792/
Top
Post Reply

Users browsing this forum: No registered users and 219 guests
×