JAMMYD777 wrote:
A little sneak peak at my revised and more accurate No Limits Recreation, with my first custom scenery.

The ride does pass the clearance test by the way

The fish eye camera of No Limits makes it seem too close.

I like the custom scenery as well, but I think the real ride will look more concrete like.
Good work.
Top

With people saying that throughput will be an issue with eurofighter trains and saying that AT should use trains like maverick and fahrenheit, I thought I would look up the throughput of them two coasters and both of them are less than 1000. Maverick = 936, Fahrenheit = 850 and Saw's throughput is 1000 so eurofighter cars wouldn't be so bad espically if the use 3 or 4 rows.
Check my new RCT3 park
http://forum.towerstimes.co.uk/rct-and- ... ness-park/

Sorry if this has already been posted, but what about this? Vertical launch that was originally going in the Dark Forest...

If SW7's trains have lapbars like the ones in that concept art, I will be most pleased

dominoes wrote:
Sorry if this has already been posted, but what about this? Vertical launch that was originally going in the Dark Forest...

That's not a bad shout, had completely forgotten about that!

Magrathea wrote:
If SW7's trains have lapbars like the ones in that concept art, I will be most pleased

Those would be fantastic, they look similar to the ones B&M use on their Mega coasters.

I'm not sure they would be acceptable on a coaster with inversions though.

I found the restraints on Dare Devil Dive to be pretty good, although it still wasn't a great coaster.
Peter

So is everyone saying that this ride will be completely backwards and have lap bars now?
I like the idea of lap bars, but not a fully backwards ride.
Health and Safety would say that it isn't safe going vertical backwards wearing only a lap bar as you 'could fall out'.

^It's not backwards. It is a vertical launch.
Top

You had me worried then! Going backwards is boring.

I’ve stayed quiet about the indoor section as I frankly have no idea what will happen. However there are a few things that are certain or at least very likely.

1. There won’t be a beyond vertical drop inside. There simply isn’t enough room from floor to ceiling for the drop and the pullout. Unless it’s one of those silly 180 degree drops Mumbo Jumbo is about as short a beyond vertical drop you can get.
I suppose they could be digging a basement for the building but I somehow doubt it. Unlike Sub-Terra I don’t believe the planning application mentioned digging down.

2. I suspect the station will be at the top of the building followed by a turn and a near vertical drop. This is just based on the fact that every other Euro-fighter with a dark ride section starts like this and it’s a really good opener.

3. Although the building is larger than the Warehouse for Saw it looks quite narrow and also has to contain more of the queue line and station (Saw’s queue is an overhang off the side of the station). The inside section will be very restricted and probably quite short. If there is an additional inversion I can only see it being something like a Heartline Roll or a dive loop Aka. one of theses two elements on Mystery Mine

That’s my thoughts on the station so far. I think there’s a good chance we could be seeing a vertical launch based on the fact we know the park has already considered this (see dominoes post)

Personally I also believe the trains will be a similar design to the traditional Euro-fighter but with 3, maybe 4 rows. And Lap bars of course.
Last edited by Nightfall on Sun Jan 08, 2012 3:54 pm, edited 1 time in total.

Great shout about the vertical launch. Eurofighter cars in the concept art as well. Clear possibility.

Hoping for an extra row or two, but would be surprised at anything other than the normal 8 seater cars.
Top

Does anyone else not like the idea of a vertical launch? I've been on Saw when there has been heavy rain and it isn't pleasant, playing announcements saying it will be painful, so a launch would be worse..?

The SW7 building is meant to be bigger than this? ¬ Doesn't look like it from the plans?

Smashing into rain going upwards would sting even more.

I have reservations over the reliability of any launch system really.

First I've seen/heard of this Dark Forest launcher concept? Can anyone explain anymore? Is it the previously-abandoned Euro-Fighter Nathan was talking about?

"World's first vertical launch rollercoaster" would be a hook Alton Towers would furiously push as they so love to do. Not sure looking at the profile of the top of the vertical section that I can see this though.
Top

Hi all. Version 3 of the No Limits re-creation, but only a teaser I'm afraid. Updates may be a little scattered through the week as I won't have as much time to work on it.

I have put the ride over a very basic landscape (a quick 30 second mop up in paint to check dimensions, hence the very low res). At the moment I am debating whether to put it over a google earth scan or create my own landscape art. If I do, I shall probably get the ride looking bedded in (with all the tress and foliage reclaiming the area).

Overview of the work I've done today. Lots and lots of fencing! 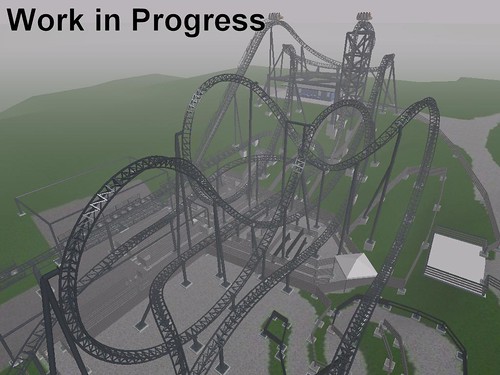 This is the view from the stilted platform. You can see the basic frame for the station in the background. 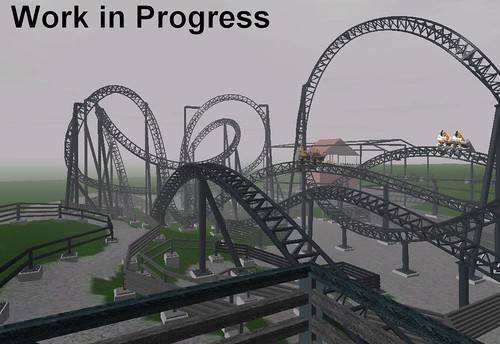 I know a lot of you are eager for a POV and the No Limits file. But please be patient, as I say, this is taking a lot of work (about 17hrs thus far). Also, I have never done 3D modelling before (to put the station building in) so that could take some time for me to get to grips with. It might just end up being a rather basic box, depending what software I can get hold of.
See my No Limits recreation of SW7 (filmed by JAMMYD777) at
http://www.youtube.com/watch?v=SOFUNyo-MKY
Top

If it does become a vertical launch how fast would the launch be? With the top hats being so tight on the top of eurofighters surely it has to be quite slow or otherwise it would be very intense and possibly uncomfortable for most guests.
Top

I have no idea who Nathan is, but there was a Dark Forest eurofigher that also launched upwards. I posted the picture on the last page.

And Nemesis94, that looks truely awesome! It actually makes the layout look alot more simple than on the plans...
Top

About a year or so before Thirteen opened, a research company ran a survey on behalf of Alton Towers which asked people to give their opinions on several different concept attractions. Featured amongst these was what later became Thirteen, but one of the other options was a vertical launch coaster.

Users browsing this forum: No registered users and 27 guests
×