Only just seen the theming plans

A big metal spider?! Not quite sure how that will fit in

^Think war of the worlds / weapon thats gone wrong / out of control and I think we wont be far off.
Top

That spider like object looks about the only good thing theming wise.

No "saving the world" or "expriment gone wrong" rubbish please. Give us something new and interesting that isn't a rehashed theme from Thorpe Park.

The idea of X-Sector is that whoever the mysterious people who are running the place are, you almost feel when you are there that they have complete control over you and that you are always being monitored and analysed.

There are endless ways to constructively develop the theme without being an Oblivion clone.
Top

No one knows the exact theme so until then, I dont think its possible to judge how good it will be or if its going to another Oblivion clone, which it clearly isn't by the plans.
Top

The idea of X-Sector is that whoever the mysterious people who are running the place are, you almost feel when you are there that they have complete control over you and that you are always being monitored and analysed.

One of the theming objects is a CCTV monitoring van of some kind... that fits in pefectly with the theme you're describing.

The spider object in the middle has settelite dishes / mobile phone receivers on it along with a bunch of LED monitors in the middle sphere.

This ride theme, to me, will be something like a government monitoring project gone wrong. Think 1984 / Big Brother. Maybe with a bit of Robocop thrown in.
Last edited by adsyrah on Thu Mar 01, 2012 5:02 pm, edited 1 time in total.

Thanks adsyrah i was going to post exactly that re contradiction.....
Top

I don't get why people are complaining that this could end up being a theme that used before. As long as it sticks to the X-Sector theme loosely in which I mean relates in some way, then as long as Alton Towers do the theme well then I'm not bothered if we have seen it in other parks.
Check my new RCT3 park
http://forum.towerstimes.co.uk/rct-and- ... ness-park/

I think; of course the theme will fit into x sector (to what extent is unknown) but Alton/Merlin will have a team of well paid professionals or as Disney would call them 'imagineer's' to think of the theme & make sure it fits in. I very much doubt with an attraction costing £20m this would not of been though about over and over by people a LOT more qualified than we ever will be.

Although we/I probably think we could do it better, we are only one audience & they have to think what will EVERY audience like & come up with something that will satisfy & appeal to everyone. I have no doubt that they do the BEST they can do with the budget given & really have VERY high hopes for the theming of this ride.

Maybe they are now realising that theming is more important than ever for continued enjoyment over years and years to come (*cough* 18 years on and who wins the coaster poll?*) This just doesn't apply to our side of the audience, but EVERYONE.

Where as perhaps some people would rather more time & money be put into back story / merch / history, the majority of people only care about the immediate theming right in-front of their face and something they can relate to.  The fact that SAW:TR is one of the most 'popular' rides in the country proves this point. Albeit most on this forum wouldn't agree, myself certainly not, but we are but a fraction of the parks visitors.

Saying that though, that doesn't mean that 'this' market isn't catered for either; I mean, look at N:ST's marketing for example & a lot of what we say/think is took on board, because we more than others know what we want and appreciate a good attraction. We/you can be a powerful marketing tool in itself as many have said over many threads.

Cant even remember what my point was now.... oh yeah, STUART PEARCE FOR ENGLAND?!

Another quick update to show what I've been up to. All rides are now represented in X-Sector as well as all major structures. 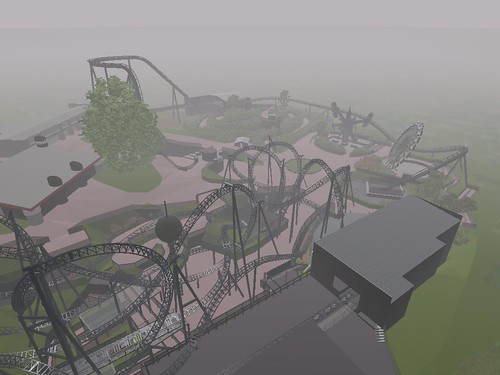 The buildings (apart from SW7's) don't stand up to close scrutiny, and are mainly there to give a representation of the size of everything in relation to the new coaster. I could go the whole hog and give them all accurate textures and so on, but it would be seriously time consuming and would start to slow No Limits down (there's no real point really, since we know what they look like anyway!)

Submision and Enterprise I actually found available to download somewhere, so that's saved me a lot of time. Oblivion's a bit too tall at the moment, so that needs a little tweaking. I've been doing a lot of work on the new fencing recently, and also on rock borders for all of the paths (only a few  inserted so far). No legs on the "spider" yet, got a couple more things I need to do before I can start them. Still aiming to have it finish in a week or so.
See my No Limits recreation of SW7 (filmed by JAMMYD777) at
http://www.youtube.com/watch?v=SOFUNyo-MKY
Top

Awesome as ever Nemesis94. I won't ask for a download soon as I won't rush profection. That picture shows to me that SW7 won't dominate the area as much as I first thought.
Check my new RCT3 park
http://forum.towerstimes.co.uk/rct-and- ... ness-park/

With recreations like that, AT will be snapping you up in no time. Better than the original plans that were submitted!
Top

Brilliant recreation and it gives us a great idea how awesome X-Sector will look next year!
EXIT THROUGH THE SHIPPING CONTAINER
Top

Nemesis 94, your updates are truly amazing! I can't believe how much detail you've put into it!

And can people stop critisizing SW7. It's a ride with 8 inversions...
8 inversions.
To be honest, I don't care if it's themed like Squirrel Nutty, just as long as we get an incredible roller coaster. Which we are!
Top

Having 8 inversions won't make it a great ride.

Colossus has 10, yet it is hated by just about everyone on these boards.
Top

To be fair its rare to find something that isn't hated by just about everyone on these boards.

Superb recreation and that angle definitely gives a great overview of the area.
Top

Dobba wrote:
To be fair its rare to find something that isn't hated by just about everyone on these boards.

These are a few of our favorite things, we just have a nice mix of FanBoys... Haters and Constructive critics

As for 8 inversions making this ride good, Colossus only does inversions, its one into another into another with one half-arsed camel-back. This seems to have been more interestingly put together. And Alton lacks a big thrill coaster.
Top

I'm really baffled though as to what will make this ride a World First?

The worlds first is puzzling

The world-first might just not be as obvious as Thirteen or Oblivion, could just be something relating to the theme.

Will be interesting to see what they have come up with though, with a little over a year to go. Exciting times ahead.