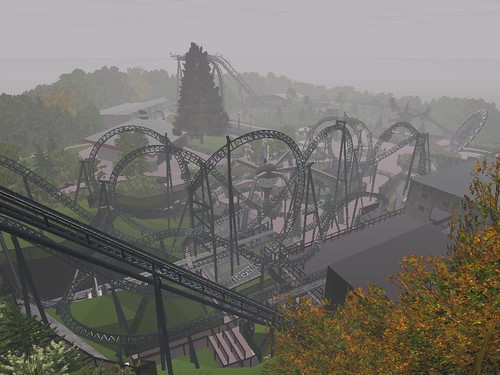 The new video is now back online. As ever, many thanks to JAMMYD777 for putting this video together, and also for refomatting it so as to remove the stuttering that was encountered at the weekend.

I hope it serves to keep us all excited about what has the potential to be an amazing new addition for 2013...

PS: Liking the graphics on the mini-site, but puzzled how the shiney chrome fits in with the general derelict feel of the drawings released. Could the artwork have now been altered?...
See my No Limits recreation of SW7 (filmed by JAMMYD777) at
http://www.youtube.com/watch?v=SOFUNyo-MKY
Top

Shame the cobra roll and batwing don't really duel. It never actually occurred to me before.

Nice work Nemesis94. Looks amazing, just a shame about that party pooper of a station building.

I really wish they would incorporate the old Black Hole arch into the theming of this ride. It's just too damn good to be demolished!

Wow that coaster looks amazing. People keep asking for something to rival coasters stateside looks like Alton Towers are going to deliver
Top

Johno wrote:
My bet for a name: Gemini.

Will they open a kids version a year or two after called Junior Gemini where the Beastie is?

Thing is, looking at that and other images, the ride building does not match X-Sector in the slightest and sticks out way too much, the derelict, abandoned theme should be kept to Forbidden Valley (bar Air), and the Dark Forest. X-Sector was always the edgy, modern facility and the station completely jumps away from this, relating too much to the recent Nemesis Sub-Tera in theme at first glance. They really should reconsider the worn themes on the theming and station, it just doesn't suit the area.

Apart from that the coaster its self is looking rather good and should be a great addition to the theme park in terms of thrills. The fact that its rather compact gives a slight 'head chopper' element to parts of the ride.

The head choppers and scenery interactions look amazing. The tunnel bits, are they on the plans?
Top

Tht video is so detailed if SW7 turns out anything near that quality this ride could be in for ride of 2013.

Looking into riding the ride and not seen it on any plans where do other people think the ORP's will be taken?
Top

I was thinking the other day, perhaps they've missed a trick with not "teasing the nerds" as Thorpe put it, with the original LC12 poster. But I like this. As with "The end is coming" teaser, this gives a theme, without giving us THE theme.

Clearly they've put some thought into it too. I'd say its no coincidence the W crosses over in the middle - to represent the dueling aspect.
Can't wait to see how this pans out. They've got a LOT to live up to after THE SWARM, and next year will be a make or break year for the park and its future. But so far so good.
Top

Well that's a good start! I'm shocked at the chrome rather than rusty metal or old wood, but it encourages the X-Sector theme and hopefully we'll see more than was stated on the plans.

The marketing should be interesting - they're going for secretive. Interesting to see the public use of a Secret Weapon tag, I highly doubt it will be the final name but it works well as a teaser.
The DNA helix - they can go anywhere with that! I don't think the double helix is really a hint towards the dueling nature, I honestly don't think it's been thought through that far! The helix does resemble track though and is hopefully a hint towards a backstory.

I'd love to see some actors in X-Sector come summer - Merlin seem to be utilizing them for publishing coming attraction  so I'll be surprised if we don't.
Nothing loud and brash like Terry staff, just a presence. People in suits perhaps - smartly dressed, monitoring things and being there. No shouting or scanners needed I think, just a sinister presence that gives you the feeling that something isn't quite right.
Top

A good revamp and it could be as amazing as it was in '98.

Blaze wrote:
They won't get the 7.

And yet there it is, for every visitor in 2012 to see.  It says 'Coming Soon SW7'  If they won't get it next year, then why should they get it this year.  But it's there!

Look at it this way.  To the casual visitor, which makes up 95% of the total visitors, the SW tagline means nothing.  Take off your enthusiasts hat for the moment and imagine you went into a park elsewhere knowing little about the place and you saw an area fenced off with the words 'Coming Soon - ZX4' in a nice, glossy logo.  You'd have no reason to suspect it to be anything else other than the name of the attraction.  It's not a tease like LC12 which, as far as I know, never said 'Coming Soon LC12'.  The project name, like just about every other project name in AT's history was only used in-house and known to enthusiasts and used subtlely but never directly even suggesting that was going to be the final name of the attraction.

95% of the people who read that sign on the BH Site fence will see SW7 and assume that's the name of the attraction.

Even if the poster said 'Coming Soon Secret Weapon 7', it's at least giving a hint that it's a secret codename of some kind, but to actually only use the SW7 moniker is what makes this rather interesting.  The casual visitor just doesn't know what the SW stands for.

To us, the statement that SW7 is coming soon is a no-brainer, we've known it for some time.  But for the park to officially use that straightforward statement to all the visitors makes a big difference, much like they were blatantly told they could 'Ride Rita in 2005' at the end of the 2004 season...
We said then that the park would be foolish to blatantly use that statement if they were going to change the name and have the casual visitors say 'What happened to that Rita ride they were going on about last year?'  And hey ho, the ride was actually called that.

I'll re-iterate; it's not that I'm getting all excited that this ride's going to be called SW7, but to actually use the codename so publicly and to actually have the direct, difficult to mis-construe 'Coming Soon...' pre-fix is extremely interesting.  I'm no marketing genius, but surely to make that statement to get those three figures into the casual visitors heads is a bit odd if they're going to change it later.

And let's face it, back in 2004 when the Rita name controversy raged, who'd have thought such a bizarre name would now be such a solid part of AT's history?  Rita meant nothing to anybody and most visitors probably still don't understand that idea of people (men in particular) naming their cars after ladies.
For the third time that day, his flaps fell off.
Top

I wouldn't read too much into them using SW7 in main stream marketing. They used SW6 in early Th13teen marketing, just look at the banners on the truck that delivered the drop section.

Also recently Towers have aimed early marketing at enthusiasts as it energizes the fan sites which Alton have finally realised offer free advertising as geeks talk about it on social media.
Top

Plus we'll still be talking about it in half a year’s time, long after most sane people have stopped caring.

Still I find it interesting that they’re displaying the codename in big letters and in a place the general guest will see it. Either they just haven’t been very imaginative or they want us to know it’s important that this is a Secret Weapon.

Well X-Sector and Oblivion where the culmination of the origional Secret Weapon concept so if the new ride is in that genre the term works for marketing even for those who have no idea about its history.
Top

They clearly want the public to be intrigued by a short codename like that, and they simultaneously want the enthusiast community to take note. It's like they are saying "this will be big." Almost in a way that is like "we know we misled you with Th13teen, but this will be a TRUE secret weapon."

I know I'm probably going far too deep here, but the prominent use of SW here is to make a point to the enthusiast community, I am sure.

1) The Swarm was originally called "LC12" - I believe on fences and even down to the early website. Therefore it's entirely likely that AT will continue with the name SW7, until shortly before opening, when the "real" marketing kicks in.

As to Actors I think it would be really good if we had a Lez Cougan sort of person roaming the X-Sector. Shouting at guests to go away and be scared of what's coming. And then just military staff walking around silently, slipping into the background and not even taking notice of the Lez Cougan character. I think that would work quite well.
Check my new RCT3 park
http://forum.towerstimes.co.uk/rct-and- ... ness-park/