AWTSW90 wrote:
For me, Saws roughness ruins the ride experience. The beginning of Saw is fantastic, if I could ride it and hop off at the lift hill i'd probably do it over and over again. For me it all goes wrong after first drop.

I would agree with this. The problem starts on the first drop after the lift hill - just stand and look at peoples head from off the ride once they reach the bottom of the first drop, their heads violently move forward then sharply back.  Normally on rides that are rough you get the side to side head banging on the restraint - on Saw its forward and back against the headrest. I don't normally mind rough rides, but that one gave me a headache straight away, and is the only ride that has done that to me.

The ride is almost a killer.

The forces after the first drop push your head forward and prevent you moving it back. Totally kills the enjoyment from then onwards.

I had a nauseous headache for hours after. SAW is not a quality ride.
Top

DannyNewbro wrote:
This might seem random but when you mentioned Oblivions audio from the top being removed due to it being too loud and we're discussing audio in the seats of SW7 why don't AT spend some money on fitting speakers in the speakers and there could be a huge build up to the drop with the sound of a heartbeat or something and then that 'Don't Look Down' audio when you reach the drop.. imagine how awesome that would be! Sorry I'm posting on the SW7 topic, just thought I'd bring that up since I have never heard anyone mention it

Allegedly, the issue was not so much the audio itself, but the fact that the audio caused people to scream more, and it was the screaming that was the problem.  Seems a bit dubious, but, that was the reason for the audio being removed.

I didn't find Saw rough. If you just push your head back at the top of the drop I found it to stay there, no forward and back roughness. But doing a over vertical drop won't be the most comfortable thing in the world if you think of the way it will force you, but like I said I managed to just keep my head pushed back and was fine, where as the other three people I went on with said it was really rough, lol.
Last edited by djneice on Thu Feb 23, 2012 10:50 am, edited 1 time in total.
Top

i don't have a problem with saw at all, it's my favourite at thorpe. i would just like to clarify it's not the ride that's rough, the engineering is fine and the trains ARE smooth. it's the forces that are rough, i personally enjoy it, for the same reason you would go on a wild mouse coaster to be thrown around. sure it's not everyone's cup of tea, but that doesn't mean there is anything wrong with it.

I don't find Saw "Rough" per-say, but the bottom of the first drop (the beyond vertical one) is badly profiled so there is a huge jolt that gives me (and most others it seems) a headache. The rest of the ride then feels worse because of that resulting pain. I have ridden Saw once where i didn't get the jolt so bad (i believe there is one car that seems less affected by it) and the rest of the ride wasn't too bad. But then different people have different tolerances when it comes to intense forces. As for Speed, that was more than re-ridable and a really fun ride.

As for a Euro-Fighter not being worthy of an SW, their latest models are getting great reviews around the world, the GP will unlikely link SW7 with Saw as they don't really notice these things and obviously it doesn't have a beyond vertical drop which is the signature element of Saw. If Gerst have improved as much as people seem to be saying then this could certainly top Air and Th13teen in the SW polls. Seems there is some B&M snobbery here but as smooth as B&M are they are often bland so not perfect themselves.
Last edited by Dormiens-Dave on Thu Feb 23, 2012 1:16 pm, edited 1 time in total.
Top

Everyone just needs to man up a lil bit...

I know it's a day late, but this 3D modelling stuff is slow work. Just one image to give you a better view of the finish I'm going for. You can see the new mesh fencing and also the mesh canopies. 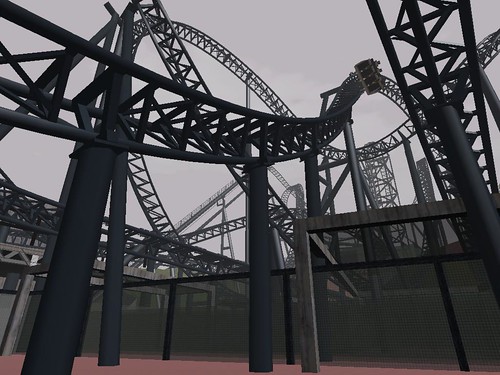 Hopefully more on Sunday.
See my No Limits recreation of SW7 (filmed by JAMMYD777) at
http://www.youtube.com/watch?v=SOFUNyo-MKY
Top

Will the new version be up for download?
Check my new RCT3 park
http://forum.towerstimes.co.uk/rct-and- ... ness-park/

Maybe. Just let me finish it first, spent over 10hrs on it the last two days alone. Aiming to have it finished within the next two weeks.
See my No Limits recreation of SW7 (filmed by JAMMYD777) at
http://www.youtube.com/watch?v=SOFUNyo-MKY
Top

Nemesis , I hope to god you are using a modelling program and not nolimits for the scenery.

Instant Mix wrote:
Nemesis , I hope to god you are using a modelling program and not nolimits for the scenery.

As much as the model that is been made is fantastic can we not start discussing its "method of creation" in the topic (feel free to praise its wonderfulness though as and when updates are made).

If you have suggestions or specific questions PM the member directly, it keeps the forum on topic.

^ There probably won't be much chances of that happening.

Well as SW7 is reliant on the basis that the tent is demolished - if the tent gets declined then the plans for SW7 would be withdrawn just like they did for the Woodie that never happened in the valley. Chances of the tent being refused is slim I would of thought anyway.

A day late again, and not much progress. I've been having shadow problems. They are mostly resolved apart from the fencing having an odd light shimer to them (you might be able to see it in the image below). Wasted too much time on them already so going to crack on with the rest of it. Hopefully a more substatial update by the end of the week.

I spy with my little eye, something beginning with O... 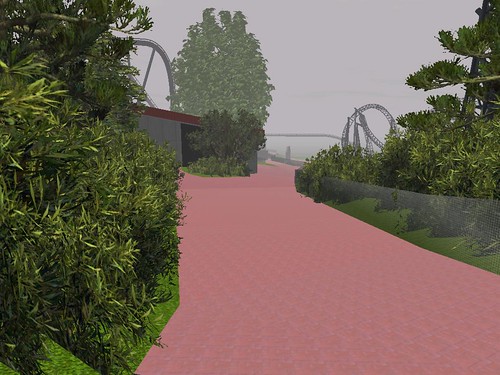 See my No Limits recreation of SW7 (filmed by JAMMYD777) at
http://www.youtube.com/watch?v=SOFUNyo-MKY
Top

Loving the recreation above.

Like the look of the two coasters in xsector!

CoasterCrazyChris wrote:
Loving the recreation above.

agree with you there, but if your walking from a/land you will only see sw7 above the toilet block not oblivion. I like how the recreation (& hopefully in the flesh come 2013) hides sw7 behind the bushes/trees and then when you get up close, BAM! Thats something else I love about AT
Top

Also, I think the way AT will theme SW7 will be a sort of disused piece of machinery in the corner of X Sector. Oblivion will dominate the area, but SW7 will be a place where members of the public shouldn't go to, e.c.t...
Just going from my thoughts here

And with Alton Towers, anything can happen.

It will be pretty cool walking into X-Sector and only being able to see Oblivion's drop and SW7's interlocking cobra rolls.
Top