That's the point - we don't know what the World's First will be.

So until then, it's SAW with added loops.

And no matter how many added inversions you give it, a Eurofighter in its present form will never, ever make an excellent ride.

A new track and car design is developed to create the first of a new generation of Eurofighters. I hope this is what Alton Towers are working with Gestlauer to develop.

CoasterCrazyChris wrote:
And no matter how many added inversions you give it, a Eurofighter in its present form will never, ever make an excellent ride.

It has a different car type, but its likely SW7 will also have a modified car if they want to get anywhere near the throughput they usually demand of their SW's so will that be a Eurofighter?

All we actually know is this is a Gerst so comparison with anubis isn't unjustified.
Top

tbh, pretty much all Gerst coaster's which have inversions have the same kinda style, regardless of what their official ride-type is. There isn't really much of a difference.

I Love Saw and Fluch, in fact I like Speed too, so yeah looking forward to this, they are good rides, (Rage is alright as well

Fluch and Speed are two of my favourite coasters. Both are Eurofighters!

I think there really fun but they just look awful
Top

Update time, and a "proper" update this time. Been hard at work on it today and most of X-Sector is finished to a standard I'm happy with. There are only a few more details to do, such as the electric fence posts and oblivion's catwalks. Otherwise it's mainly work on SW7 itself. I still need to do the spider's legs, all of the shop and entry sign graphics and I want to tweak some of the catwalks on this too.

It's getting pretty big the file now, and my computer's struggling to cope. The main problem is with some of the rocks I have used which are very detailed. I may remove these in future to help the ride run better, or have two recreations, one with and one without.

Now to the screenshots:

From the same viewpoint as one of my previous updates. The big tree has been replaced with something more like the real one. The fencing has also been framed, and the troublesome rock borders have been added. Notice the other addition? 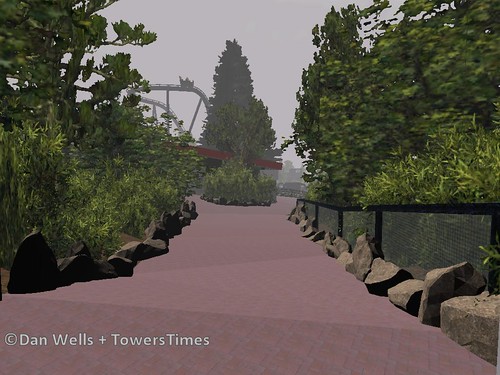 This is the view of SW7 from Oblvion's queue, from ontop of the middle queue building (the semi-circular one at the front). 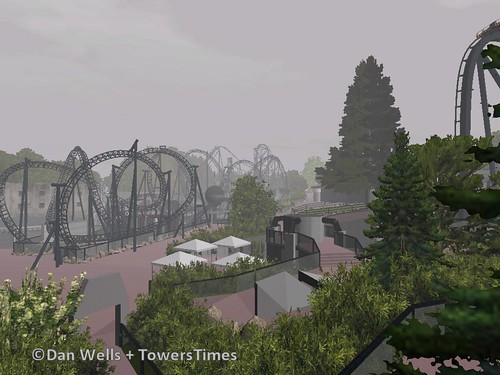 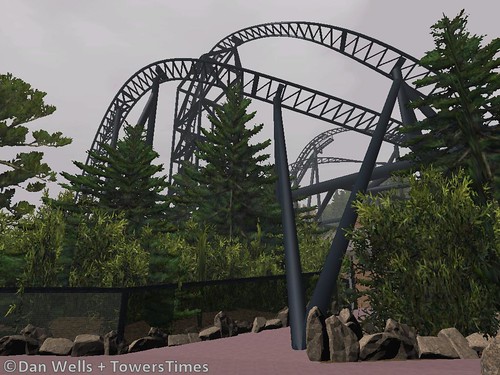 One of the secondary theming objects, notice the spikes. I've had to make alterations from the drawings so that they actually fit the ride (if you look at the drawings, the ride actually goes through the middle of them). 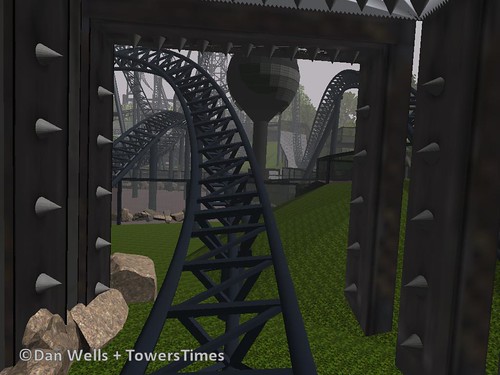 I have smoothed all of SW7's track and this runs a lot better than my old model with less "pumping" as it is called in No Limits. The fiercest part is still the S hill after the batwing, but that's what's on the drawings so I can't really do anything about it. 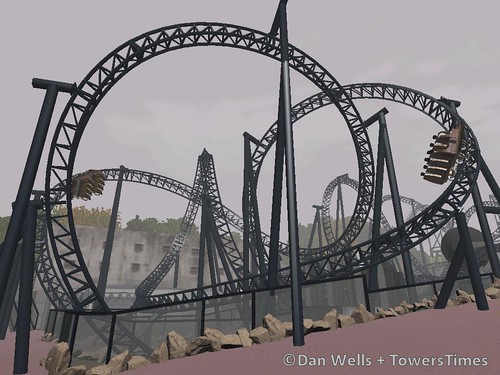 I have also improved the supports, and made them look a bit more "Gerstlauer-y." Though they still need a little tweaking here and there. 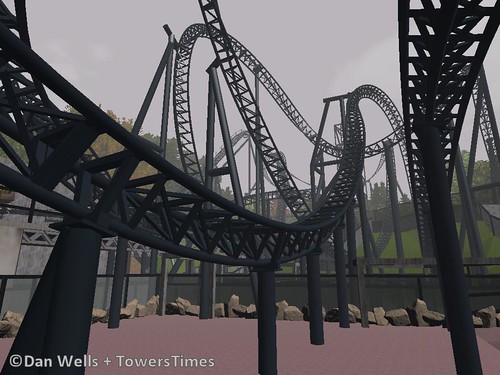 Station interior with platform. This is all I'm going to do with it though, since we don't have any confirmation of what it will actually be like. Also I've updated the textures on the cars to make them fit the new theme. It will be very interesting to see Iron Shark's eurofighter cars (the new Eurofighter at Galverstone pier) it has normal 8-seat cars but will only have lapbars. 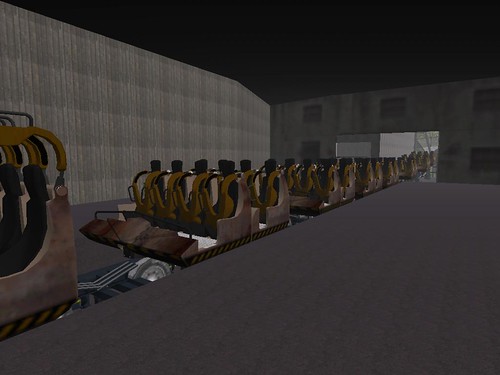 Don't know why, but I really like this screen. Maybe because I don't think there's much I could do to improve it. It just ... looks ... right (even if I do say so myself). 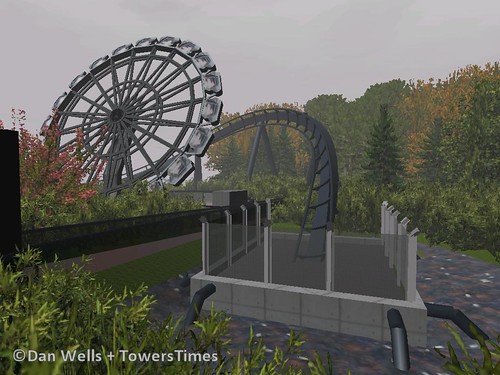 And finally, the view from the top of Oblivion's drop. The oblivion shuttle (like Submission and Enterprise) I managed to download, which saved me a lot of time. The textures haven't ported well into No Limits, but it looks good from the right angles. 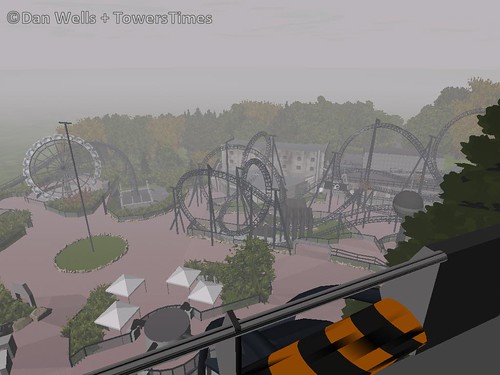 As ever I shall keep you updated with my progress. Fingers crossed I should be able to get it finished by the end of next week as planned (there's a little game called Mass Effect 3 coming out, which I intend to devote a great deal of time too).
Last edited by Nemesis94 on Sat Mar 03, 2012 10:15 pm, edited 1 time in total.
See my No Limits recreation of SW7 (filmed by JAMMYD777) at
http://www.youtube.com/watch?v=SOFUNyo-MKY
Top

Looks more awesome than normal Nemesis94. It's nice to see an update very so often and I look forward to the next one.
Last edited by RyanY on Sat Mar 03, 2012 10:23 pm, edited 1 time in total.
Check my new RCT3 park
http://forum.towerstimes.co.uk/rct-and- ... ness-park/

there's a little game called Mass Effect 3 coming out, which I intend to devote a great deal of time too

I'm with  you on that one

I was just fiddling about in 3DS max, trying to create a rough design of the spidery thing, and got me thinking what it could be/do...

all these screens, think there could be a lot of static/ a random stream of images... perhaps even some eyes, watching down at the peeps in the queue...

even the rough theme fits in!

Don't think your too far off there fredward! That sort of style is what I think this ride will be. Experimental, futuristic, slightly worn....
Top

A very quick update showing what I've been up to today, I should be getting paid for all this! Don't get used to these near daily updates though, might not be anything on here until the end of the week now. But hopefully, it might be finished by then :-)

The spider/robot now has legs! I'm still in the process of tweaking at the moment. If you look at the drawings, it doesn't actually fit the ride :-S So I'm having to alter the legs so that they clear the the track. It means some of the legs look a little strectched at the moment, but they should look better when I've finished. 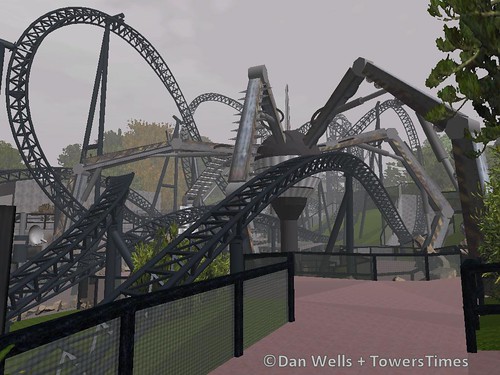 And finally a quick poster mock-up. This was just a five minute job though, I may improve it if I have time later. 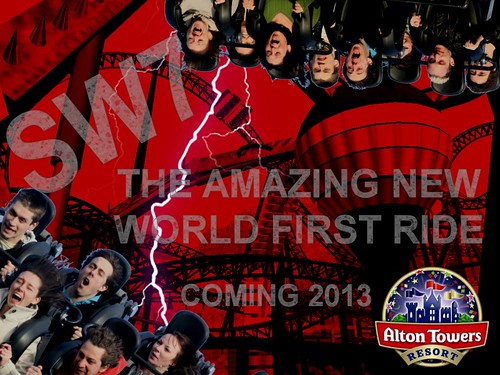 It's not as "chunky" or imposing as the 2D drawings suggest, but it's still impressive. Especially from down on the plaza with it's legs stretching out over everything. Maybe these will show what I mean: 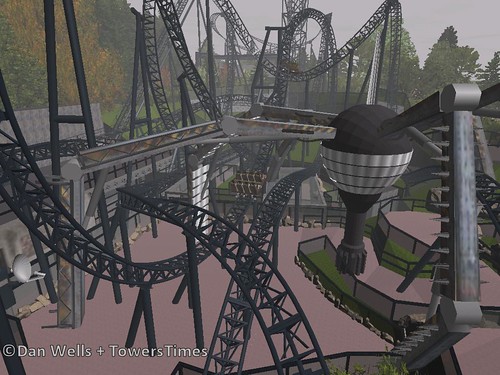 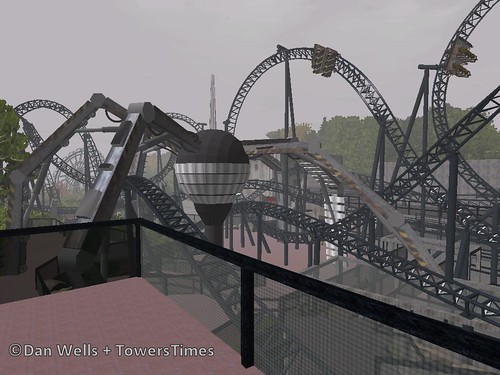 These both show the "stretched" legs, so just ignore them for the moment, hopefully I can make them look a bit more like the drawings and still clear the ride.
See my No Limits recreation of SW7 (filmed by JAMMYD777) at
http://www.youtube.com/watch?v=SOFUNyo-MKY
Top

This is a really excellent model. I bet the park will be worried that the ride won’t live up to it

As I've said before this shows just how well the central themed object interacts with the already chaotic jumble of supports. I also think this ride is one of the best demonstrations of Wardley’s principle of off-ride interaction.


I too am hopping what fredward mentioned is similar to what appears on these TV screens. It would be very X-Sector.

Just a quick thought. Those pictures have made me think that maybe they will make the themed object out of digger arms. Getting a load of steel and making it from scratch is a lot of hard work, grabbing a load of digger arms and adding theming to them would be much easier and cheaper.
Top

I really love it. The centrepiece looks intricately designed and chaotic, reflects the mad track layout. I like it when you don't know what to look at first because it means you'll keep noticing things you didn't see before.

Users browsing this forum: No registered users and 17 guests
×