weeksy wrote:
Ouch! Is there footage of it now? Such a shame if this is it for Rameses Revenge.

When they interview some of the girls that were on the ride, it just makes me want to bang my head. I hate the youth of today, "I was like Oh My God!"

by wrightiee
How much more bad luck and bad press is chessington due, such a shame. Currently the best ride there for older adventurers.

by Chris
It is a shame this has happened but Rameses has looked and feels in a state of disrepair for a few years now.

Here's their opportunity to replace it with a floorless Topspin..

by TheOutpatient
when I last went the duration did seem to vary
I wondered if maybe it was 1 short program/cycle that was used twice or once at the ride ops disposal.

(sidenote)1 thing I do know for sure is that depending on the weight, the way it spins is different every time - I asked a ride op about that.

DeanGaryCox wrote:
In the sense they may have to replace Rameses Revenge... where is that money going to come from, considering the £5million refurbishment is already planned out; and surprised to see they're actually getting some well needed investment.

Where is the money coming from... remind me how many billions Merlin made last year.... a Top Spin is small cash to them, it's like you splashing out a fiver on Fish n Chips

bensaund wrote:
Where is the money coming from... remind me how many billions Merlin made last year.... a Top Spin is small cash to them, it's like you splashing out a fiver on Fish n Chips

Merlin made an operating profit of £258m, not billions. Although that is a large sum of money, without well thought-out spending, that could easily become a loss figure within a company as large as Merlin.

I do agree that a replacement is needed, but people need to look at it sensibly; from the looks of gate figures and budgets, Chessington isn't doing great, they don't have money to "splash out" like I would on Fish & Chips

by DeanGaryCox
The thing is 'a Top Spin is small cash to them' Chessington rarely get's any investment as it is besides the new ride and the £5million upgrade which came out of nowhere, so personally i can't see them replacing it any time soon, or at least not this year, and next year... but unexpected things like this do ruin & force plans to change.

by Caroline58
I know Merlin must make growing profits year on year, but ride maintenance is essential for continued success - something that if they neglect, serious problems could occur.

by bensaund
I have no doubt they do the essential ride maintenance. Do you think Merlin are that stupid that they will not follow the manufacturers maintenance/operating instructions and any required H&S, legal and public liability insurance and staff training on their rides?

These rides are ridden by thousands of guests every day and for them not to do the maintenance will result in prosecution and or a major accident. The rides are the main reason people go to the parks, so if they get a reputation for dangerous rides, then they can pretty much say goodbye to their parks.

I think people are over reacting to the Rameses incident. The last thing Merlin want is this happening, guests stuck, very bad publicity for the park and a ride out of action for the remainder of the season or forever..


There is some serious lack of maintenance around the parks which they are trying to resolve during their £5 million upgrade and some of the work they have done already looks good (despite what some others say) It is a shame that it was so poorly managed and resulted in no RMT for 2013 and the removal of the theming from Dragon falls and other rides. Why on earth they are doing the maintenance during the open season and not the closed season is very strange.

by obliviongirl
So according to the website, Rameses Revenge will not not be operating again until 2014. When I visited with friends last month, the ride was covered with what looked like scaffolding, although I only quickly passed it once or twice. I really hope that repairs are made to it so I won't break down so regularly next season, because if it continues to have problems, I can imagine Merlin closing down the ride altogether, which is a shame, because it's one of the best rides at Chessington WOA in my opinion.
The Runaway Train couldn't be seen at all as there was a black wooden fence blocking off the whole area, although there was a sign just outside asking for your ideas about the new look of the coaster. There was a similar sign by Dragon Falls, but the ride was still operating as usual.

by Burniel
It is with regret that I report my sighting of an incident with Rameses Revenge when I was on-park on Saturday 13th September.

The load before me had just started their first cycle, when there was a loud noise and the gondola stopped (what amuses me is that it stopped in the same position as last year). I, wanting lunch and knowing it wouldn't be fixed all too quickly, left the queue.

When passing the ride later in the day, I saw that the ride was empty, back to the bottom and with no restraints cut, but it wasn't open. According to the website, it hasn't been open since.

I'm very concerned for the ride. It is, in my opinion, in the top 3 rides at Chessington, and with its downtime over the 2013/2014 seasons, it seems likely that any serious incident would finish it off.

I hope that they are just waiting for a part.

by BenBowser
^ That happens all the time. Over the closed season they installed a quicker way to lower the gondola.

And unless sometimes stupidly major happens, i.e. It collapses in on itself, it won't leave, it would be simply to difficult and expensive to remove it from that pit. The majority of Forbidden Kingdom is built around it. Not to mention, it's probably the only attraction that brings thill seekers to Chessington, removing it would undoubtably lower attendance.

by Chris
So what do we think of Rameses Revenge finally leaving the park?

My preference was that they replaced it with a floorless model from Huss. Shame it was not to be.

Here's some footage we uploaded today that hopefully will bring back some fond memories in years to come.

by Harry347
I think it's pretty sad they are taking the only thrill ride out of the park, I know it's not for the target audience but it was still a great ride. Hopefully they move it to Thorpe or do something with it rather than just scrapping it!

Harry347 wrote:
I think it's pretty sad they are taking the only thrill ride out of the park, I know it's not for the target audience but it was still a great ride. Hopefully they move it to Thorpe or do something with it rather than just scrapping it!

Rameses won’t be going anywhere except the scrap heap.

Ripsaw was in much better condition when its parts were used for Topspin at Heide Park, and as far as I’m aware that is now closed too.

Rameses Revenge has been on life support for long enough, it’s time to put it out of its misery and let it die.

by Harry347
Went to get my last ride on Rameses Revenge on Saturday, the restraint apparently wouldn't come down enough on me (I'm 6ft3 with a 34-36" Waist), so I couldn't get my last ride, I did manage to ride it last year though so it's not too bad!

by Swarm Chris
As posted on SouthParks social media, the reign of Rameses Revenge comes to an end today at CWOA, performing its last spins at a special event this evening before being removed for a new attraction to take its place in 2021.

Opening in 1995, the ride brought a unique spectacle to the UK, providing entertainment not only for the long lines of people riding it, but for crowds that gathered just to watch it. Throughout the years the appeal of the ride remained, with a generation of families riding or witnessing its spins, water sprays and distinctive sounds.

What were some of your fond memories of Rameses Revenge? 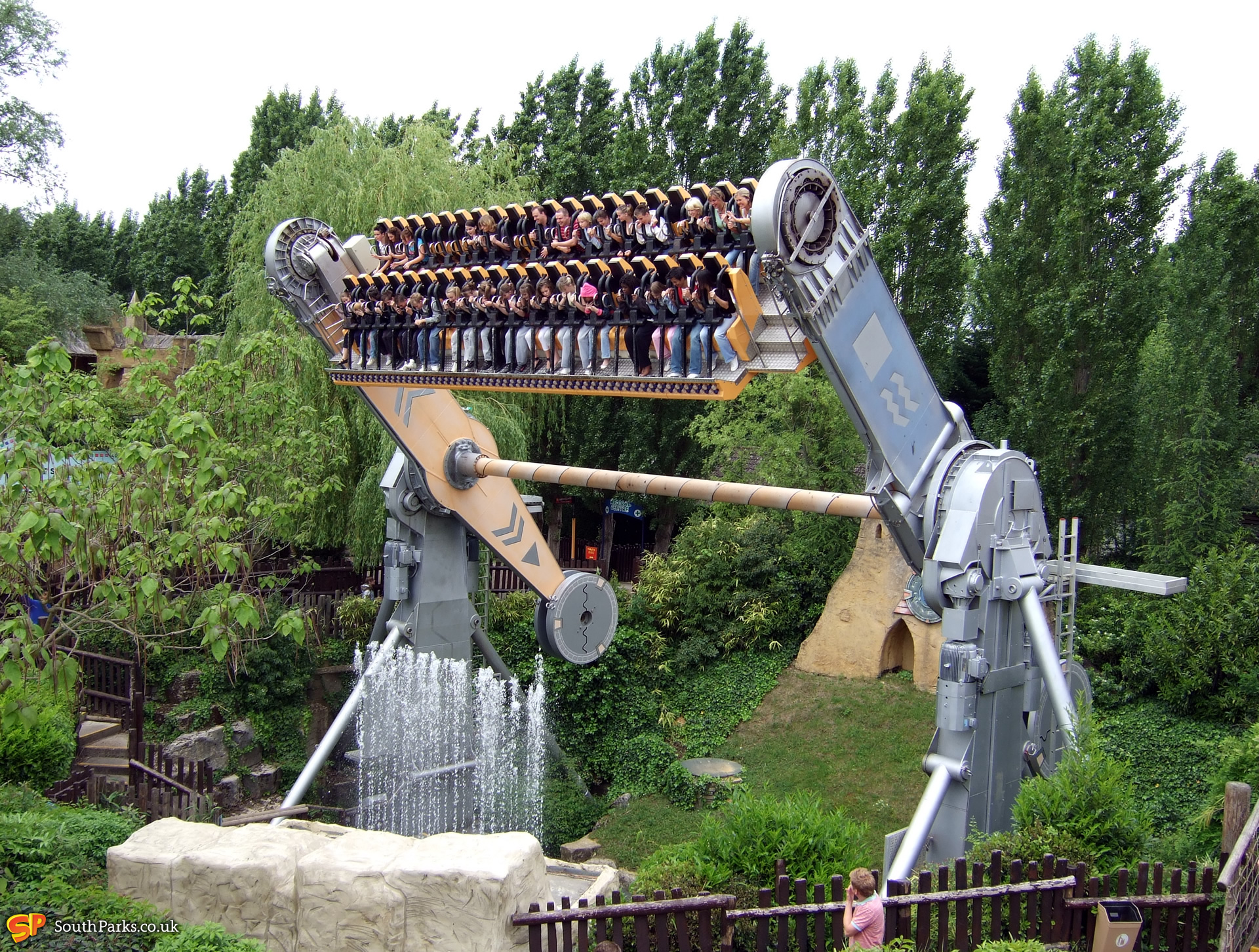 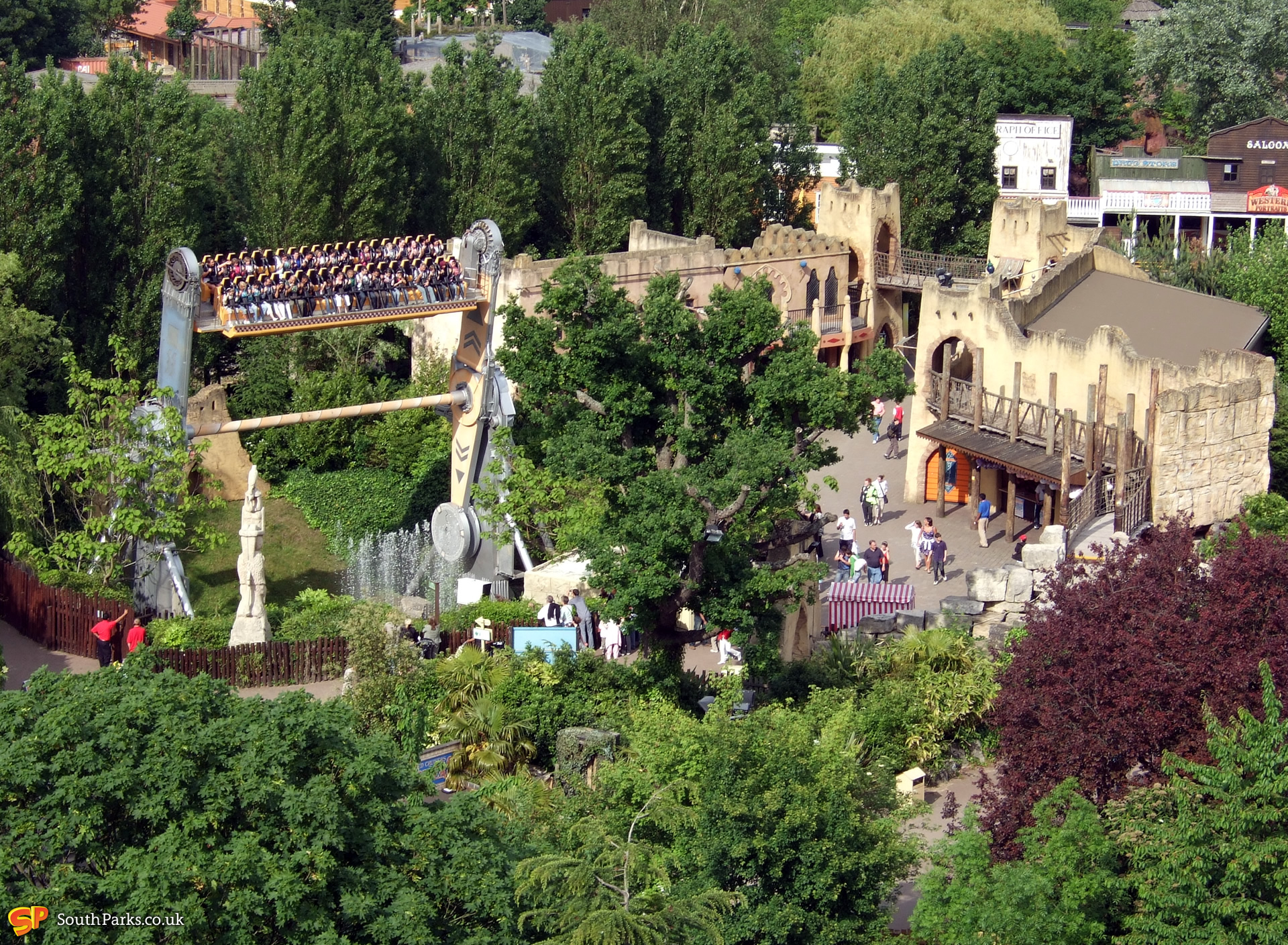 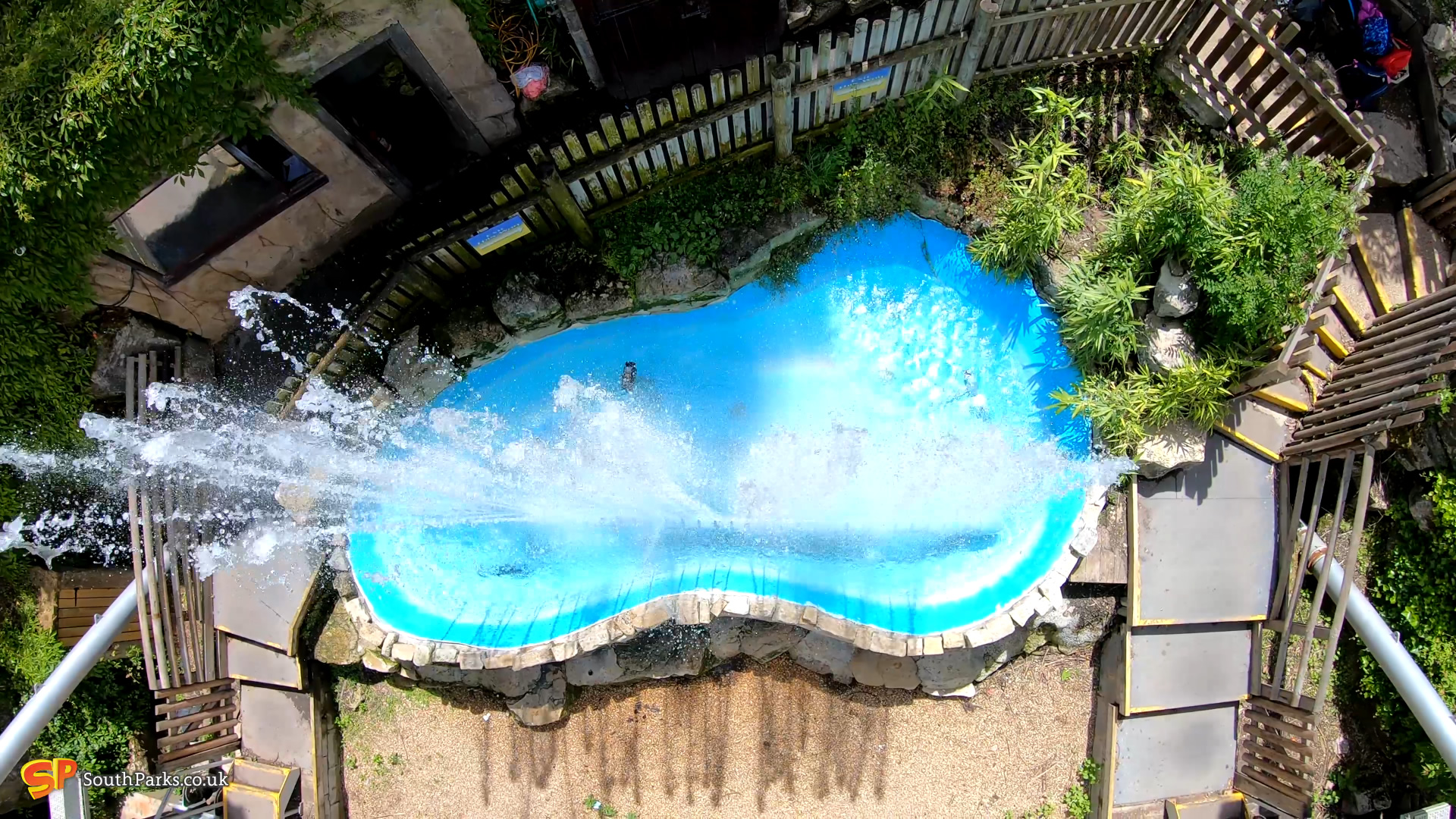 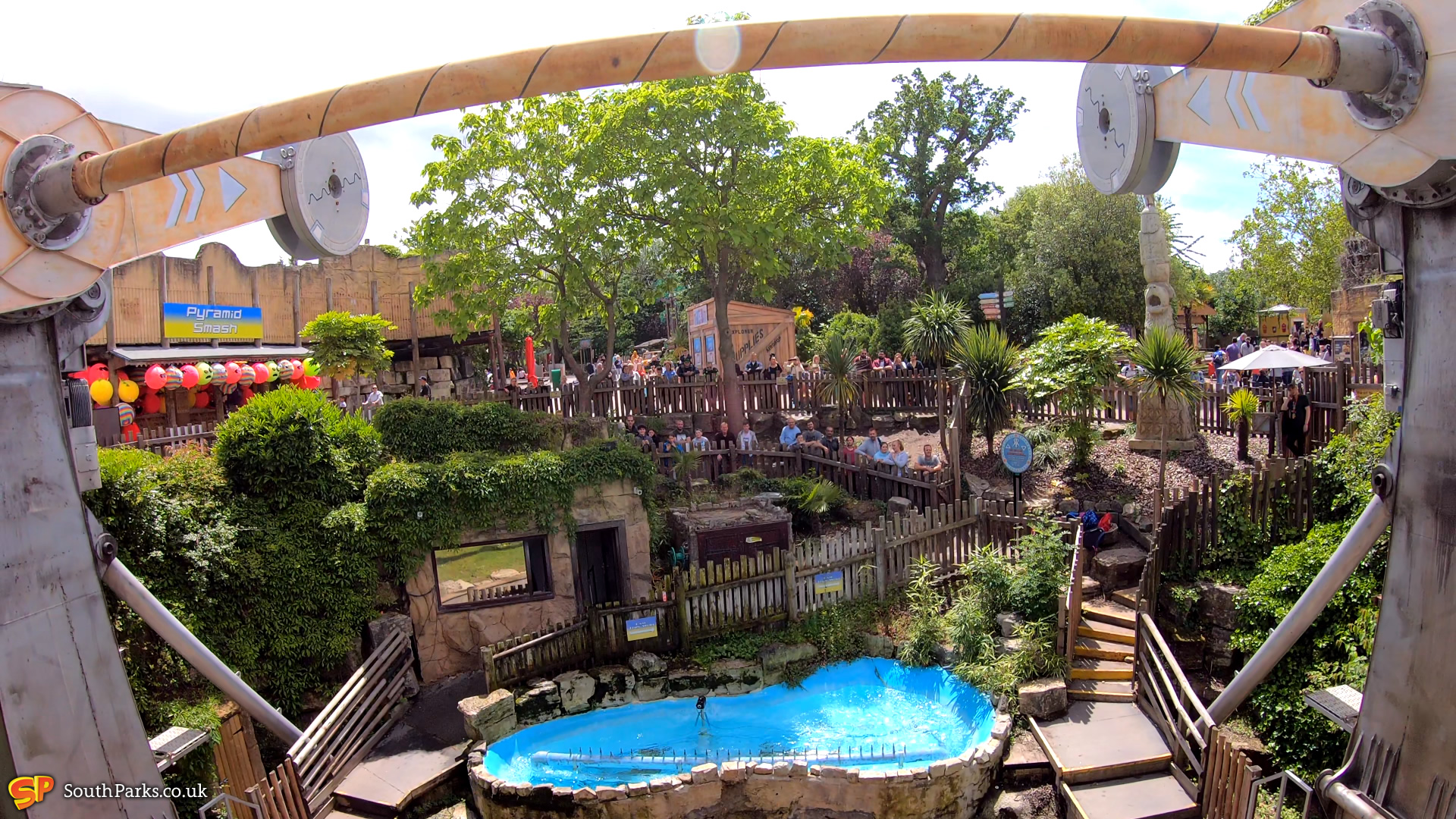 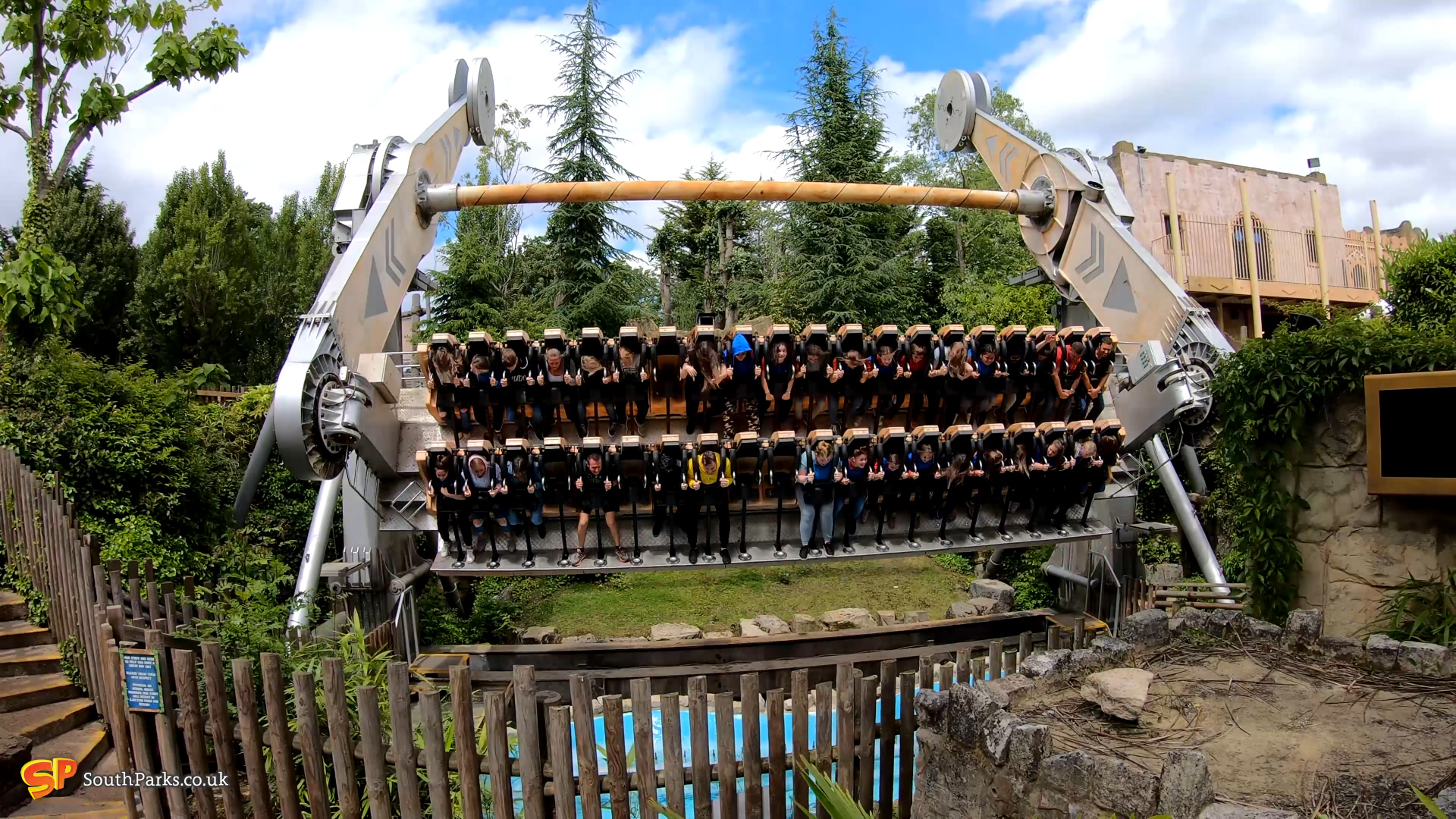 by Chris
My fondest memory of Rameses Revenge was during its first few years during Fright Nights (as I recall the event being called then, before the family transition).

It was so popular, the line reached 2-3 hours, which filled the elevated queue line, and went in to the long extension in the large planter that was eventually replaced by the truckers game.

There was music, smoke and a laser light show. It looked AWESOME.

Queens 'A Kind of Magic' always reminds me of Rameses as this was one of the prominent songs they would play.

I never really understood why Chessington gave the ride a 'Stargate' makeover, when the original Egyptian theming looked great. The two cobras either side of the structure looked so imposing.

The demolition of the entrance, along with cutting off the elevated queue line really did destroy how immersive the area was, something which the designer John Wardley did so well. Then again the majority of the park's original theming is also suffering the same fate. 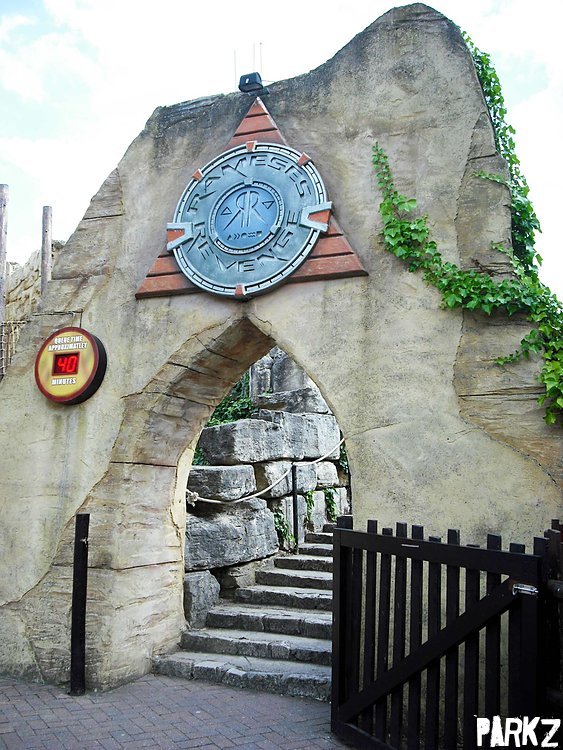 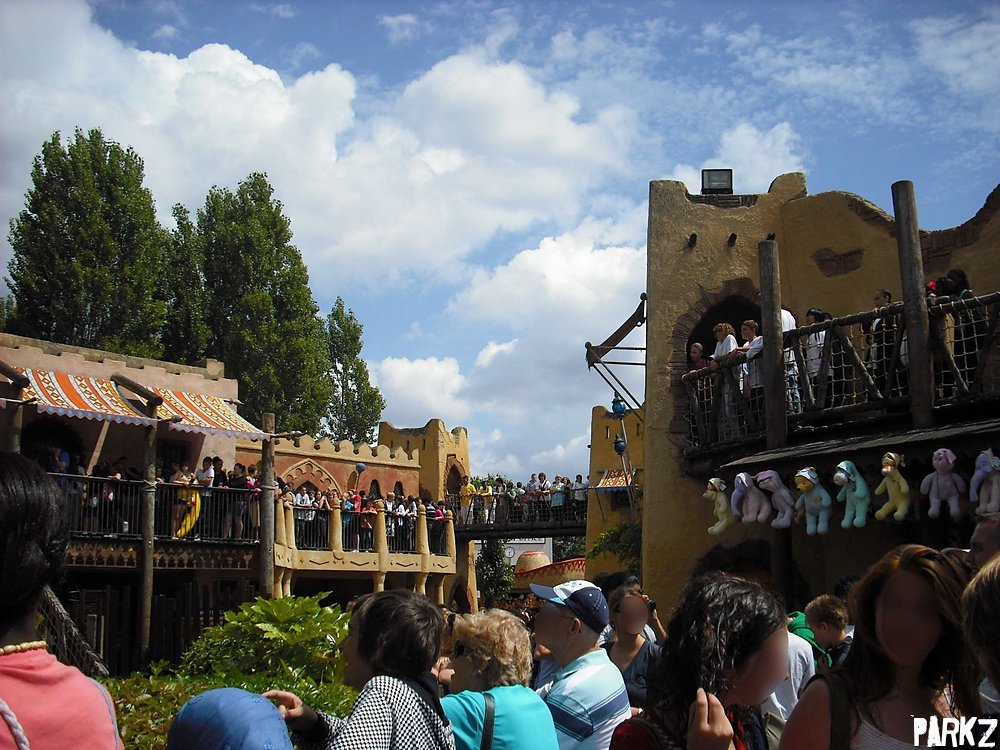 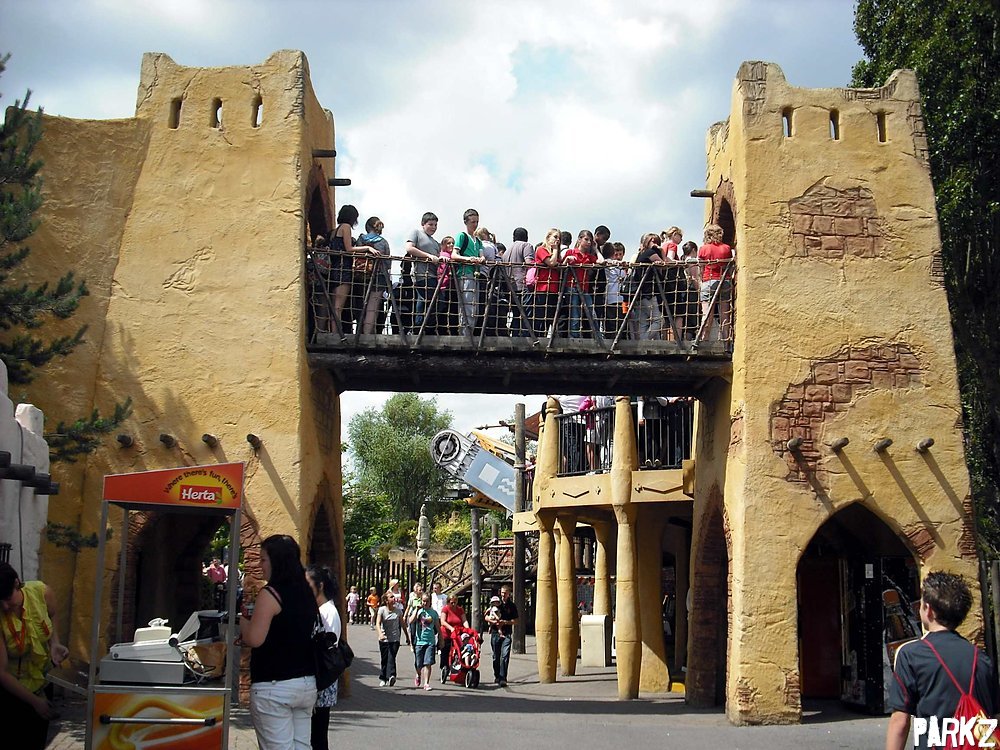 You only have to look at the below video to appreciate how magnificent the park looked in the early Tussauds era.

by KaiPhillips
It's truly sad to see it go, I went to Chessington for the first time in years (since 2012 odd) last week and as great as it was I just feel as if so much of Wardley's vision is gone, I know parks must move forwards but let's be honest the Wild Woods? that's backwards.
All times are UTC+01:00
Page 4 of 4
Powered by phpBB® Forum Software © phpBB Limited
https://www.phpbb.com/