by Burniel
I took 12+ as a Fright Nights level attraction, as that's the number thrown around with a lot of those scaremazes. I'm no expert on such attractions, so I assumed you were referring to a high level maze, which would be far too much.

Again, I think Haunting In The Hollows was about right for an "older" attraction, provided you had enough of a lineup below that to keep the younger audience satisfied. Hollows, Hocus Pocus and Trick Or Treat Wood would probably be the ideal lineup for Chessington in such a case, as that provides one high-quality attraction for each of the park's three bat ratings used to rate the intensity of their attractions.

by lewis97
Full details of the 2017 line-up have been added to Chessington's website, confirming the addition of two new attractions.

'Creepy Caves Unearthed' is said to be the resort's "scariest attraction yet" with it given a 10+ age rating. It will also incur an additional charge of £6 (or £4.80 for annual passholders), and timeslots can be booked for 15 minute intervals from 12pm.

No one knows why the famous reptile and creepy crawly exhibit in the Zoo closed its doors at the end of 2016… until now.

Secret Agents will lead you through the quarantined attraction for your exclusive look at the newly discovered plant species, found in the snake enclosure.

But, with Zoo Keepers missing and strange things happening, who knows what powerful properties might be unearthed.

Also new is 'Room on the Broom Spooky Story Time', which is another of Julia Donaldson's stories following the opening of The Gruffalo River Ride Adventure earlier this year. These new attractions will feature alongside returning attractions 'Curse of the Lost Tomb' and 'Trick or Treat Wood'.

by Owen
That's more like what I was thinking. It sounds quite interesting! Almost like a baby Sub-Species

There is also a decided Creepy Caves Unearthed website which can be found here.

by ThemeCrafter264
Woo, I was right about it being in Creepy Caves. It certainly sounds interesting and hopefully will help to create a better line up for the whole family.

by Burniel
This looks fairly promising, and means that the park actually have one of the strongest lineups they've had for a while now.

I'll be interested to see how well this sells, considering that the park has never done paid halloween attractions before. It will also be interesting to see how the relatively short layout of Creepy Caves is used enough to justify the £6 price tag. However, perhaps the main flaw I see is the lack of space at its entrance - they'll be prebooking, eliminating the need for a long queue, but there will still undoubtedly be a lot of activity outside the entrance. Given its close proximity to Sealion Bay (which I'm assuming will still be open and running its afternoon shows), the crowds will need to be very carefully handled.

On the whole though, exciting news!

Burniel wrote:
I'll be interested to see how well this sells, considering that the park has never done paid halloween attractions before.

Creepy Caves doesn't have a lot of space, so I wonder what could feasibly be achieved, that a family would find reasonable value.

Alton definitely went to some considerable effort to create House of Monsters, which was around this price level.
That was a really decent offering - something that I could see at Chessington in the future if they have the space.

by Burniel
Yeah, as I said, I don't really know how they plan on doing that. I know I go on and on about the past lineup, but I think bringing back The Mystery Of Hocus Pocus Hall and charging for that would have been a better shout, or even Haunting In The Hollows. Both were much longer attractions for which an upcharge would be more justified, and had (I assume) higher throughputs, so the park could sell more tickets and potentially make more money? I don't know, the whole concept of using Creepy Caves seems a bit desperate to me, which is odd, given the number of other suitable locations. I'm trying to stay open-minded though.

by hursty
Building plan for reference 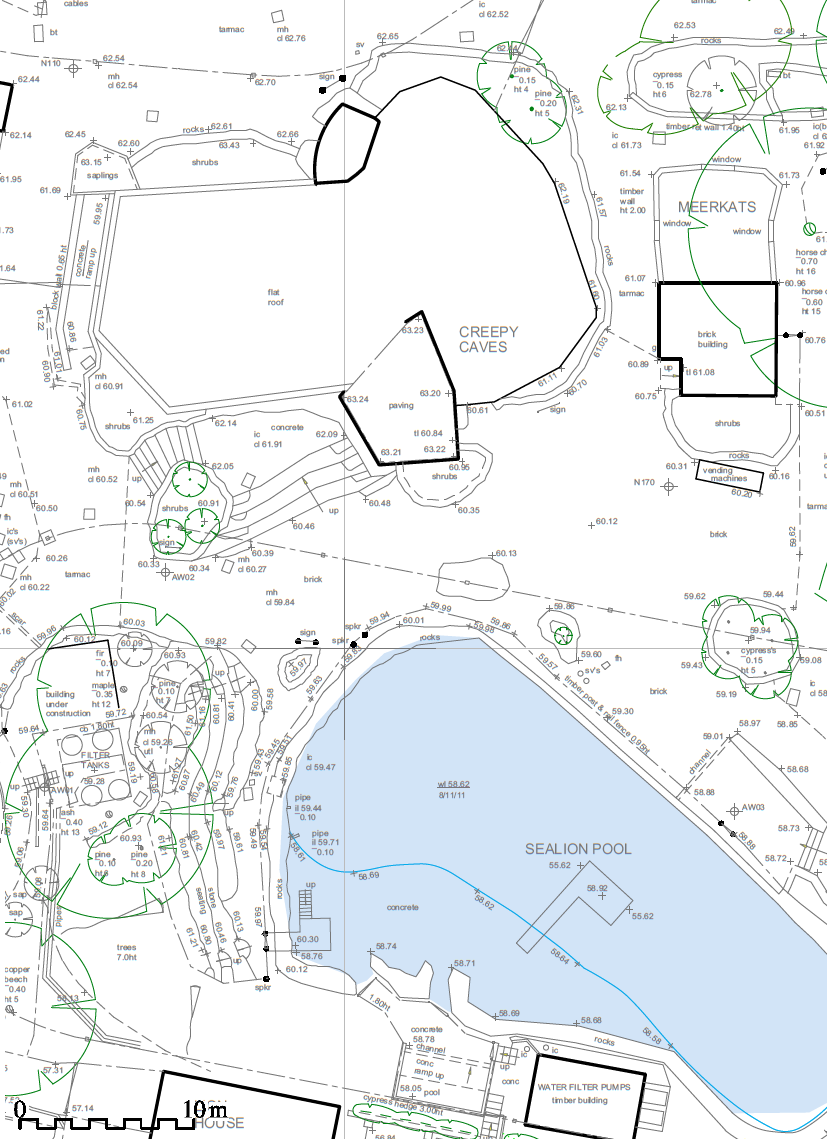 by Luce
I quite like the sound of Chessington's line up and I'm tempted to go back to their Halloween event this year as I haven't been for a few years.

Now, i'm going to speculate that the story of this will be that a plant has taken over the creepy caves, although i'm not quite sure

by jackf1tz
Who you gonna call? Plant Busters!

by Chris
Chessington have contacted us in regards to Creepy Caves – Behind the Screams Tour.

Explore the process behind the screams of Creepy Caves Unearthed! A production technician will give you an access all areas tour of all things Special FX.
Enter the green room, see the original concept drawings, and leave having Unearthed the creative processes behind the first three bat rated scare maze at Chessington World of Adventures Resort.
Price: £35 per person.

Other available experiences are 'Trick or Treaters In Training' and 'Tigers at Twilight' - more details can be found here.

by Burniel
Was at the event yesterday. Something to note was that everything seemed a little more intense than last year, with an increased presence of roaming actors, most noticeably in the Rattlesnake queue after dark (presumably because it's an isolated area where only kids over 1.4m are allowed), where multiple actors walked through the queue and coming up behind people, which was fairly amusing. Didn't do Creepy Caves, but they seemed to manage the crowds around it fairly well, and I heard a lot of good things coming from there.

Park was very busy, but queue times were extremely overstated. On no fewer than five occasions was I quoted between 60 and 80 minutes for a ride, only to be on within half an hour. It seems Fury and Vampire were the only realistic queues, with everything else massively overstated to an unacceptable degree.

On the whole, a strong year for the event, lighting around the park was particularly good. Definitely worth a look if you live nearby or are in the area.

by Michelle
I'm really disappointed that I've not been able to get down to Chessington for Halloween this year, I'm glad to see they're trying new things and it certainly seems to have been quite well received.

by Dan
As detailed on SouthParks News, Chessington World of Adventures have been nominated in this years SCAR awards, with Creepy Caves Unearthed being nominated for ‘Best Set, Costume
and Make-Up’ and ‘Best Original Concept’

by JC13
For anyone who got to do it, what was Creepy Caves like?

by lewis97
As posted on SouthParks Facebook, Chessington have updated their short breaks website to confirm the 2018 Howl’o’ween line-up, with this year seeing the return of all four of 2017’s attractions: Creepy Caves Unearthed, Room on the Broom Spooky Story Time, Curse of the Lost Tomb, and Trick or Treat Wood.

by lewis97
It seems there will also be a new show called Howl’o’ween Live, with Chessington advertising opportunities for dancers and singers, alongside acting roles.

by Dan
Chessington have started the recruitment process for this years Howl’o’ween event, with open auditions taking place on the following dates: 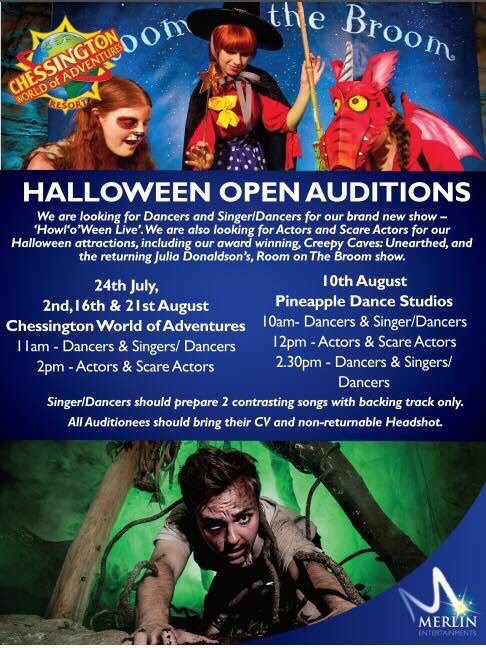 by professorb
Saw this today outside Creepy Caves. There was also an arm crawling out from under the door, can’t be seen in the photo. Not sure if this is complete or work in progress.