Land of the Tiger

Here's our POV from today's preview:

Nice new effects in the tunnel and the station looks awesome. The Tiger Rock part seems to have a lot less impact coming through it then it will from seeing it head on.

But why did we have to lose the dragon head swallowing the boats to get the shiny new stuff...
Top

The dragon? What dragon? Never knew there was a dragon... they've disguised it so well! 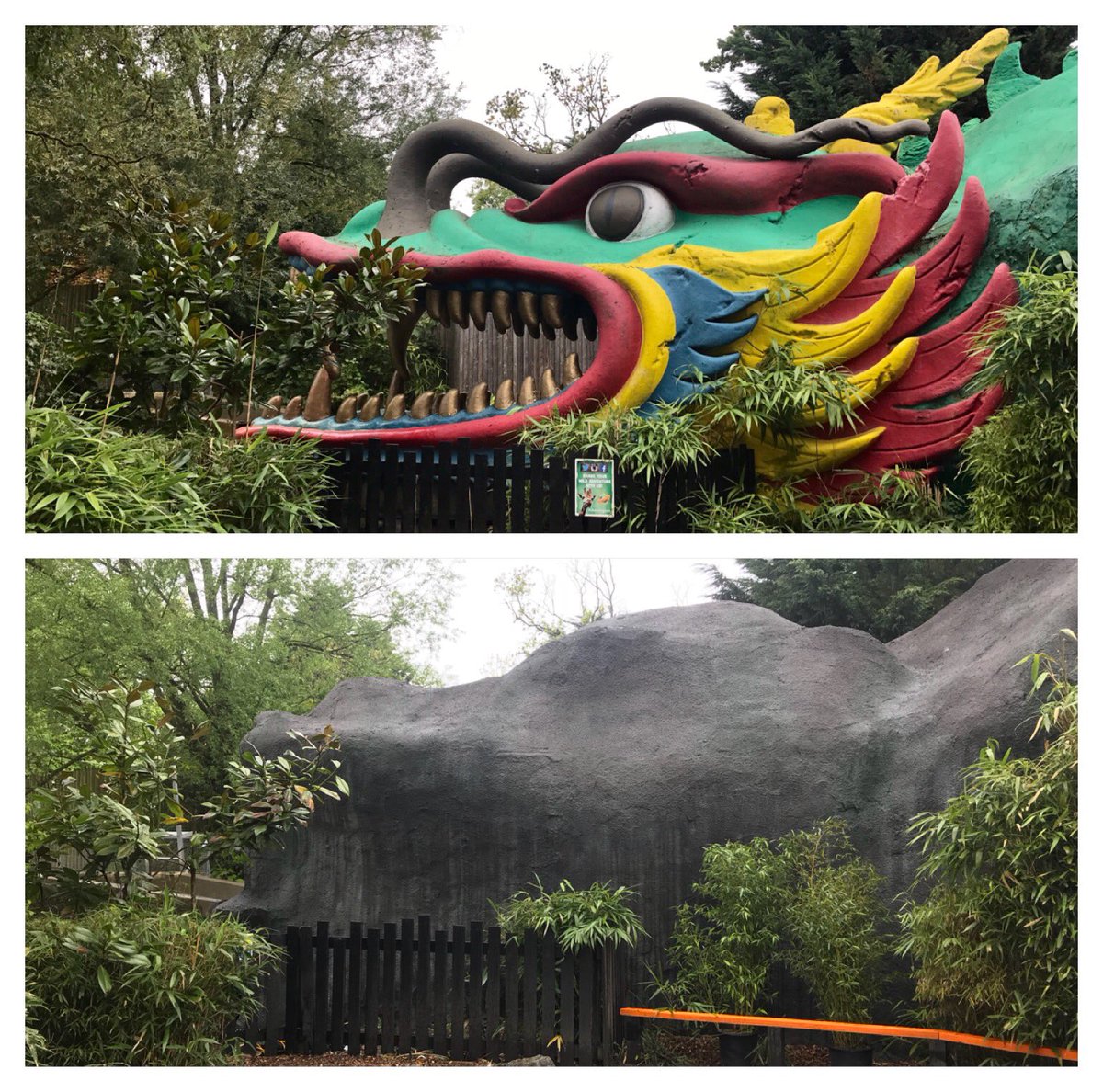 Jokes aside, this is the only real disappointment with the changes. I'd rather they just left it as it was. I'm pretty pleased with everything else though.

Well that's more depressing. From the video I'd assumed they'd removed it, possibly to stop it doing a loggers leap tunnel on their refreshed attraction.
Top

Well it is called Tiger Rock. Guess that's the rock

A nice re-fresh of an excisting attraction but feel some parts haven't been touched, even a jet wash of some of the attraction where algae has built up would have made a difference. The tunnel entrance could have been so much better and feel this lets the ride down for being one of the main aspects of the attraction. The internal of the tunnel is a huge improvement, i just hope that they maintain the effects. The final drop is nice but has lost some of its wow factor with a smaller theming element.

I definitely agree with so many other people's comments, the ride looks lovely and I can't wait to see the station in person , but what on earth were they thinking with the dragon tunnel?
Maybe something they can look at again in future so it doesn't just look like a vaguely dragon shaped piece of tarmac. 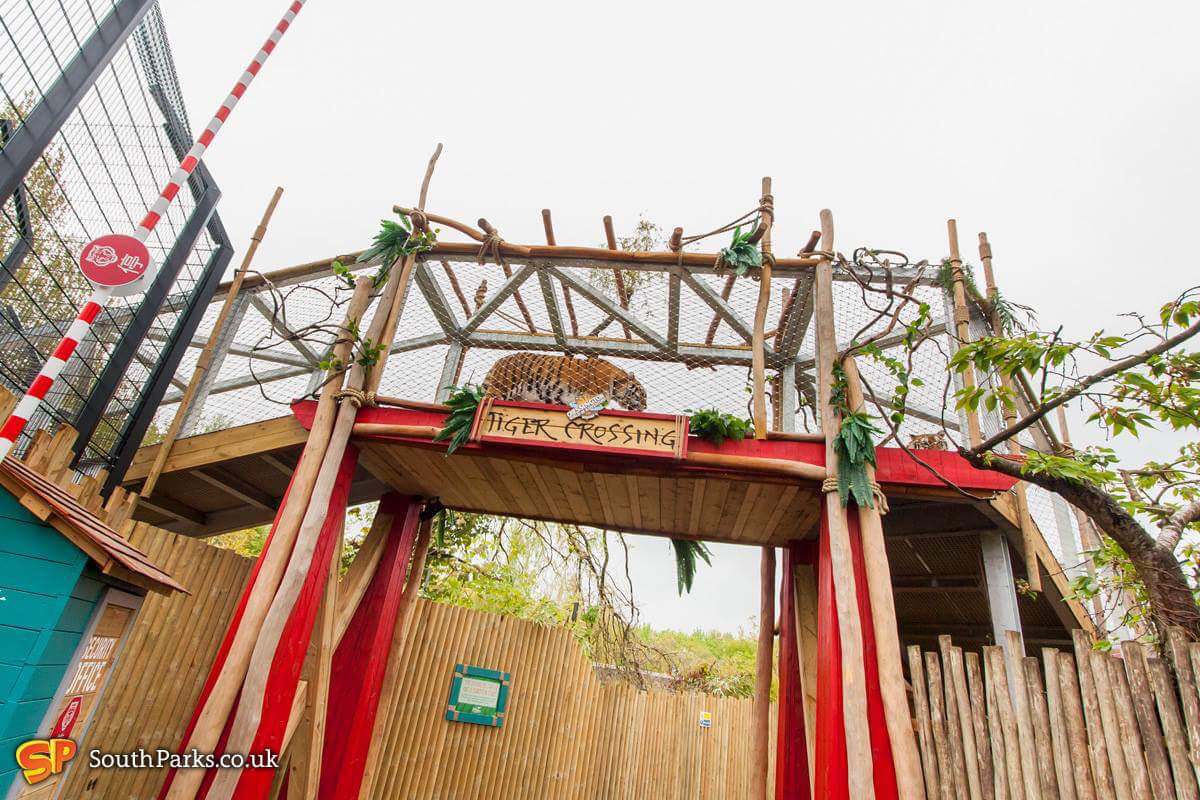 As posted on SouthParks News; Land of the Tiger is set to roar into Chessington World of Adventures Resort this Saturday 5th May.

SouthParks attended a special preview for a first look at the Resort’s newest residents and Tiger Rock.

Who’s planning a visit to the Resort to experience Land of the Tiger for themselves?

I was really impressed with what I saw of the front of Tiger Rock when I was there last week. Has a lot more presence than I thought it would, and makes up for the removal of the old backdrop there. The enclosures looked nice from Tomb Blasters queue too.

How long did you have to wait to get that photo though!
Top

It took a while for hursty to capture it but it was worth it. The ride is very nice and I am sure families will love it when they get to experience it.

I believe they wanted to do something more with the tunnel section, Michelle, but it got turned down. I do think it is the wrong colour and it should have been tied in more with Tiger Rock. That aside, it is a very nice attraction and a well-themed area. You certainly feel that you are somewhere different!

The wait certainly was worth it! Very nice pic.
Top

It's a very nice picture!

As for that tunnel. They really would have been better leaving it as the dragon. They could have painted it with the same colour as the Tiger Rock, and just left it at that as a reminder of the old ride. At the very least, I think they need to get it repainted the same colour as Tiger Rock.

Have to say really like what they've done with the Land of the Tiger and fingers crossed they re-visit the outside of the tunnel, because in all honesty I don't believe it would take a lot to give the dark grey a more authentic rock work feel.
Top

Has anyone experienced Land of the Tigers and Tiger Rock yet? If so, what did you think?

I'd like to go, but I live 6 hours away, and my mum literally won't go anywhere near London because of terrorists.....

Just back from my first visit to Land of the Tiger. I found it overall a really nice addition to the park with a great expansive paddock for the Tigers and a great new focal point of Tiger Rock.

The new entrance way means you can now enter the land from Wild Asia, where the main entrance is, rather than having to loop around either the back of the park or via Tomb Blaster. Straight away you're in the middle of the new tiger enclosure and looking out onto the Tiger Rock drop, with it's impressive stone sculpture.

The paddock is larger than I expected and does a full loop from up by Kobra, to down and underneath Tiger Rocks's drop. There are enclosures on either side of the drop, which all link up through walkways going over the visitor path or flume on both sides. There are a lot of viewing points and plenty of things for the tigers to do, including what look like very large scratching posts! The area is also set-up for the new feed the tigers VIP experience. From a video I saw in a queue line, it looks like they will give you a stick with meat on it, which you will then poke through the fence. It looks like this will happen in the main enclosed area, where there are gated areas where the glass screens can be pulled back to expose the cage.

The ride itself is still 70% Dragon River Falls. The station has had a make-over and looks really impressive now and if you're in there long enough a set of effects play out. The first part is then all the same, until you reach "Not-a-Dragon-Tunnel". Yeah, it's still the dragon, except the teeth have been filled in and it's been painted grey. All of the other detailing in the rock work, including the roof of its mouth, are still there. For everything else that's bright shiny and new, it really does seem out of place. There's a couple of sets of effects, with the last being the most impressive. You don't really have much chance to see into the enclosures after the tunnel as the water is still much faster there than the rest of the ride, despite there being viewing windows designed for ride level.  The remainder of the ride is the same as previous and I found watching boats go through the tiger rock more enjoyable than actually going through it myself. The tiger rock sprays a fine mist, but with it being a wet day, it wasn't too noticeable.

I found the new ride exit shop to be a bit odd, because the ride photo's are not in there. So if you want your photo, you either need to remember the code from the screen as your boat enters the station, or exit the shop, go across the courtyard to the photo booth and then go back into the shop.

I had one concern of the design, which was the music being played right next to the enclosures with fairly consistent tiger roars. I hope the zoologists have done some work to make sure this won't distress the animals.

I had one mouth drop, oh Merlin..., event. It looks as though they either ran out of budget, or plain forgot to finish, the toilet block outside Tiger Falls. It seemed clean and maybe had a new floor, but I don't know who they hired to do the painting. Instead of repainting the blue walls where there were knocks in them, they patched them, with a different shade of blue. But even better, there was quite a lot of white paint splashed up the side of one wall - and no this wasn't by design.

Final good note to finish on: it has a single rider queue!

Chessington World of Adventures have released their 2018 TV advert.

Naturally, it is based around Land Of The Tiger and Tiger Rock.

I can't recall seeing this thememing, but MMM Instagram have posted this new image... 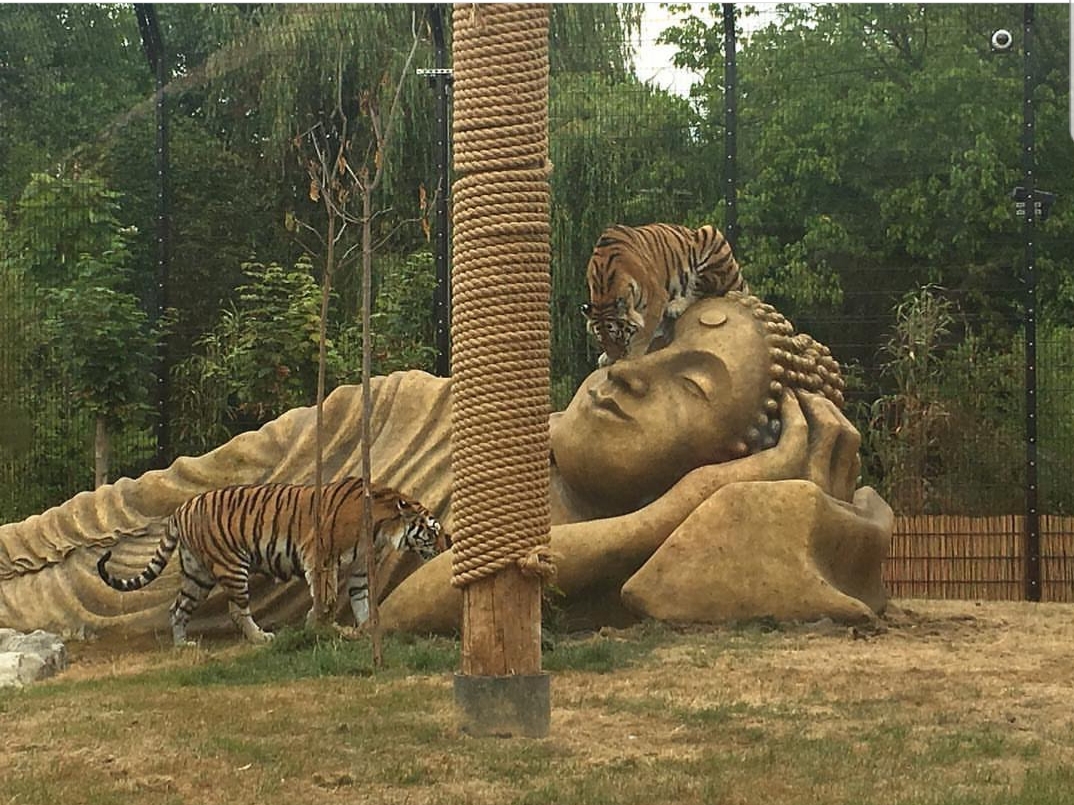 As posted on SouthParks social media, today is the 1st birthday of Tiger Rock and the new Land of the Tiger.

I found the redevelopment of the area a nice addition to the park. It certainly made better use of the area where Samurai once resided.
Top

Re: Land of the Tiger

Did you know that Tiger Rock, the Mack Rides log flume at Chessington was originally going to be part of an Egyptian themed area, before Mystic East and Dragon River were chosen as the final concept?

Click the link and head over to the SouthParks website to view photos of a fascinating model of the proposed concept, designed by John Wardley.