Kuka arm technology wouldn't be cheap and even though this ride has a big budget for Merlin, I'm not sure it would stretch that far!

Well whether it's family oriented or not, I just hope it's going to be a heavily themed and immersive experience - and not themed around aliens or ruined futuristic worlds as there's too much stuff with those themes around these days. Wish we could have our own magical Harry Potter rides here in the UK.
Top

My guess is probably something like dinosaur in Animal kingdom, hopefully a better story though

Personally I think that even though Merlin haven't got the big budgets of Disney and Universal, I think this is still going to be a great addition to Thorpe Park and I look forward to experiencing it.

I'm surprised that only one teaser has been given so far; however, I am a little dubious as if it is 'real'. I am sure Thorpe Park are playing with us!

Surely we are are due for more teasers soon? I expect them to arrive half way into August if they do as this would capture the summer holiday market!

Here are a few images taken earlier today from SouthParks Facebook. As you can see, the building's foundations are starting to take shape now, both in the pit and at ground level.

Here's something to think about...

Simworx, a company who's recently worked with Merlin on Angry Birds 4D and the bus ride in Shrek's Adventure, have not long acquired RoboCoaster, a firm involved with the Harry Potter and the Forbidden Journey rides at Universal parks. In a press release it was stated that they will now be looking to develop the RCX RoboCoaster and AGV Darkride attractions together, with either of these being, in my opinion, plausible ride systems for WC16.

What makes this even more intriguing is the following paragraph taken from a recent article about the acquisition.

Simworx has generated double-digit growth year-on-year since 2013, and is currently producing six new rides for three theme parks in the Middle East and one project in the UK, which will be announced next year.

I guess we'll just have to wait and see whether there is any truth to this speculation, but an attraction from these guys could be an exciting addition, especially after hearing very good things about Shrek's 4D ride.

That is a very interesting find Lewis. Looking at their website, it does appear that both the RCX RoboCoaster G2 and the AGV Darkride could be what the dark ride might be. I just hope that if it is these guys making the attraction, they make a unique film and not one of the rather cartoony films they already have.
Top

It seems to me that the space where this ride is located wont be big enough for one of these robocoaster thingys. If you look at the space it doesn't look that big. Look at the Harry Potter ride thats massive compared to the area. Just a thought. Light water valley are getting a simworx dinosaur 3/4d cinema soon, but they won't be able to afford this, and the fact this says announced next year makes me think 2017 opening instead of saying opens. It could definitely be this though as I'd imagine only Merlin parks and paramount could afford these. I'm thinking either this, a giant scale robocoaster at paramount, A family one for chessington or Alton have decided to switch SW8 to this as it could be marketed as a dark ride rather than a coaster, which may not seem worth risking with the incident on the smiler, If they got one of these instead of the rumoured/planned forbidden valley coaster it could possibly go down better in the short term, so my guesses are Thorpe (best bet) paramount (second bet) then Alton and chessington!
Top

If it is a simulator/video based attraction there would be significant cost advantages for Merlin if they introduced the same ride into both Thorpe and Alton as they will not need to make two films.

One advantage of this is that they could introduce new films more often, splitting the cost between TP and AT, enabling them to advertise a "new" ride every few years.

In terms of building size the simulator rides could be put in a smaller building with either a reduced ride length or throughput.
Top

This photo just got sent to me, showing that the steel structure for the building has arrived on site. 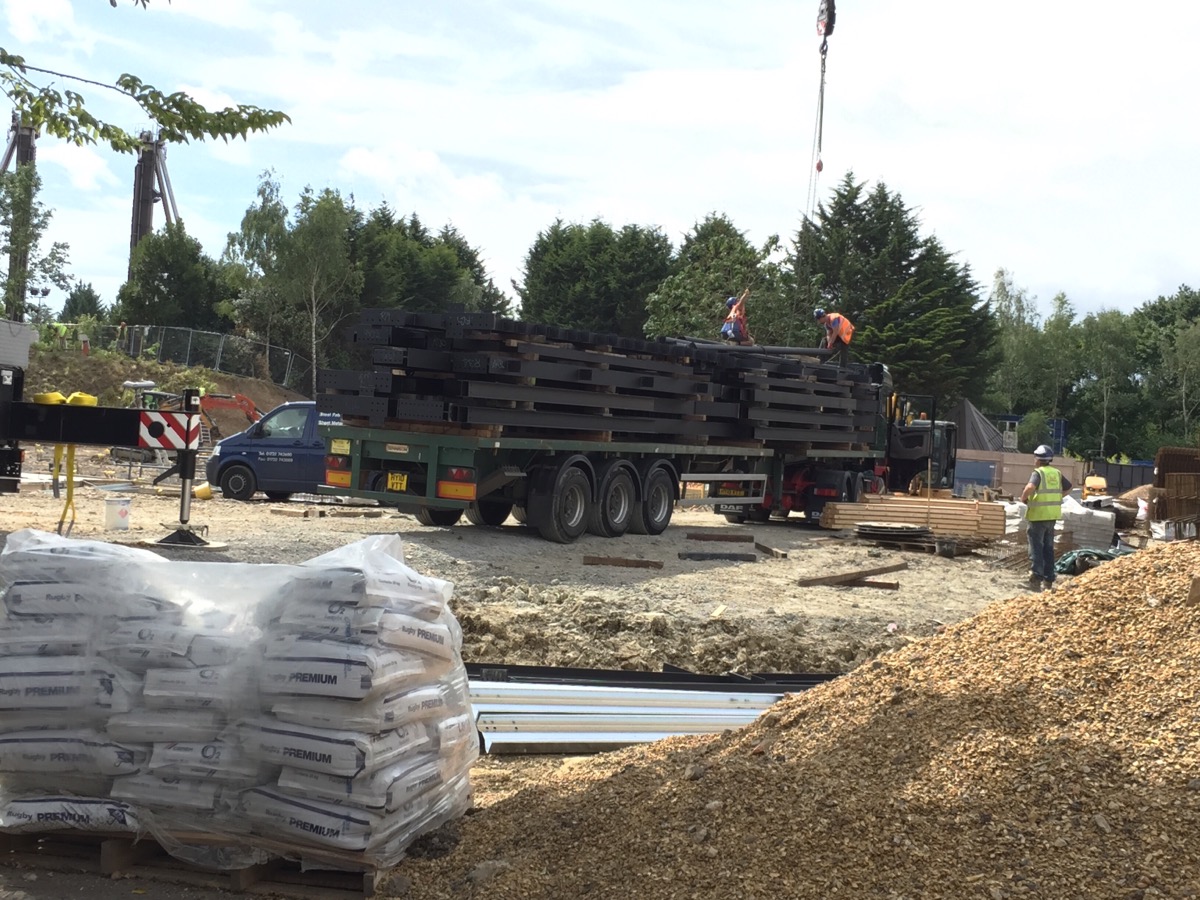 Apologies for the double post but more photos from TheCodeMaster show that the steel on the truck is being offloaded and prepared for being put up. Certainly looks like this is ready to go vertical! 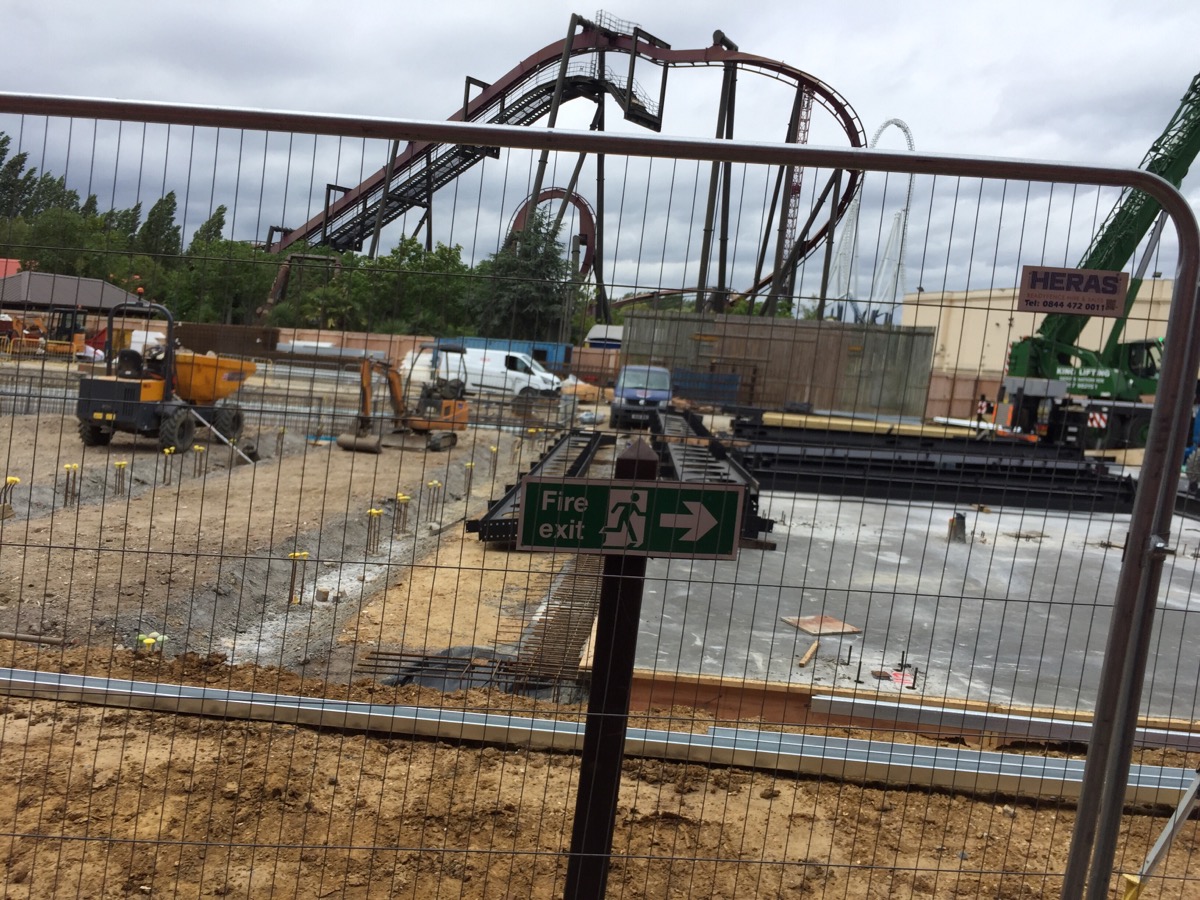 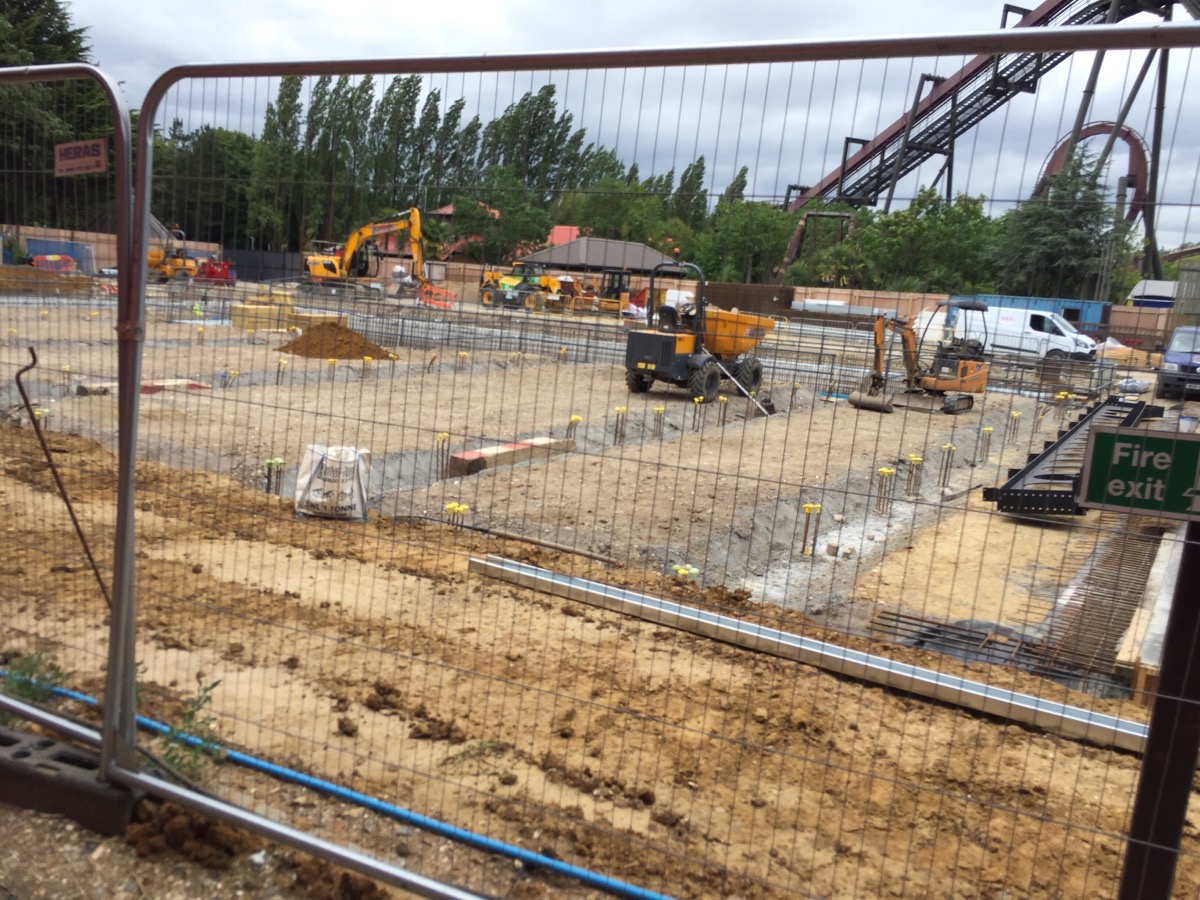 And it's going up! 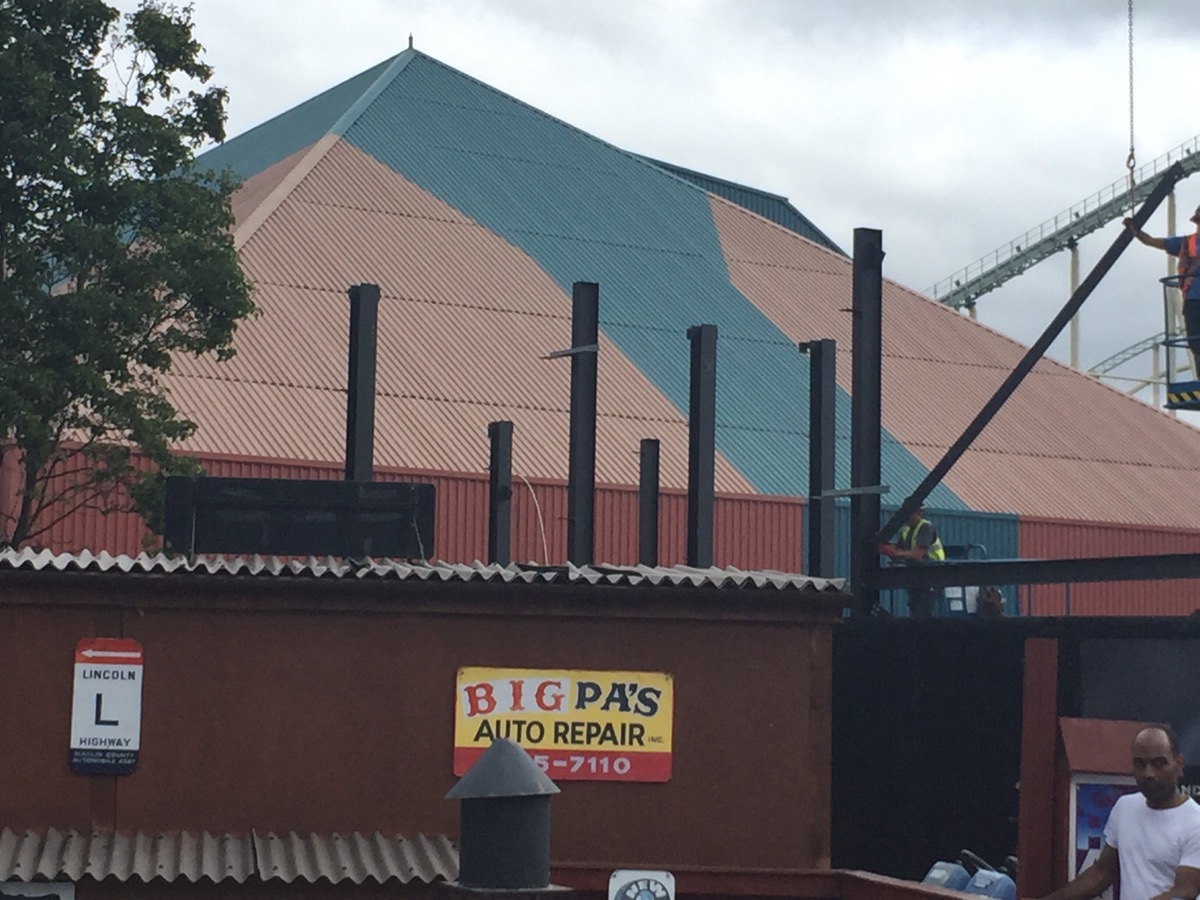 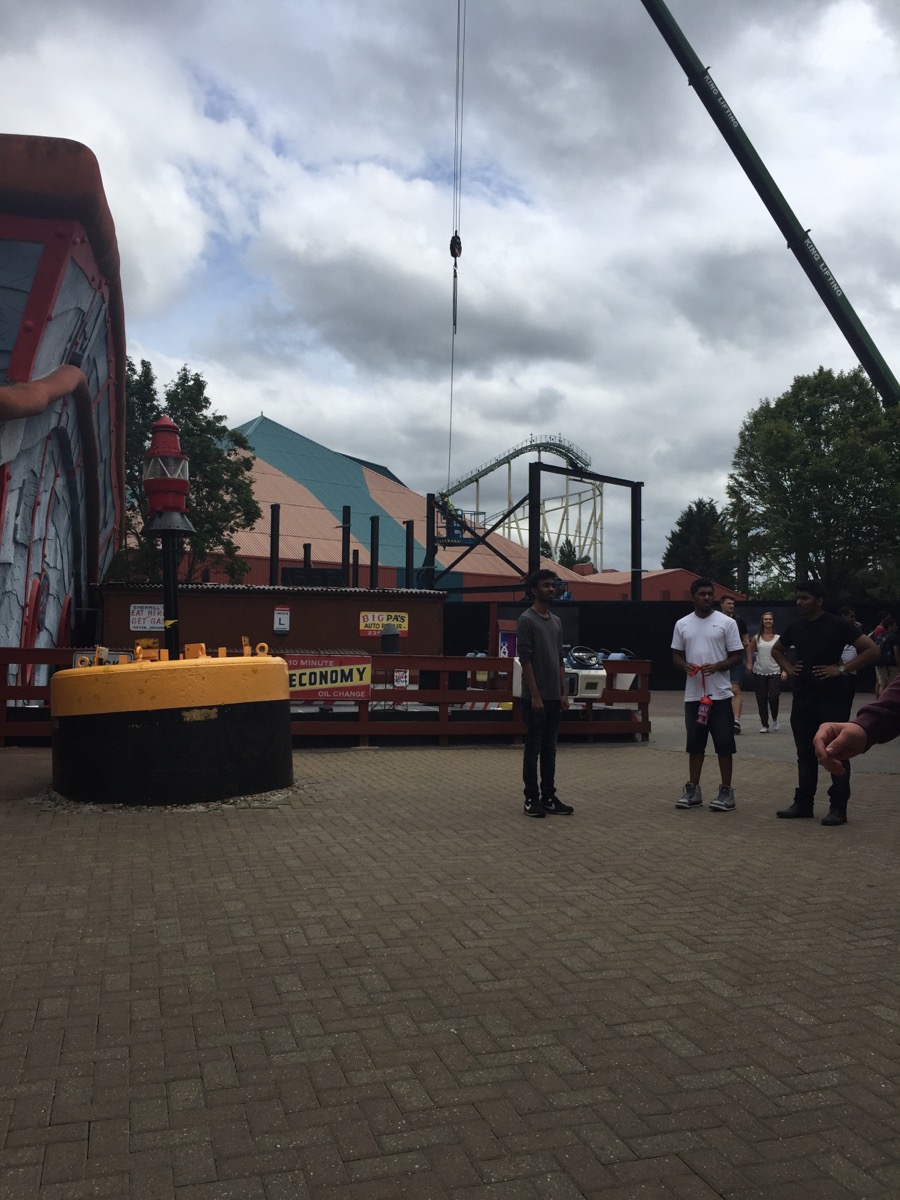 One final post for WC16 from me. The steel construction has gone as far as some of the roof support beams, giving an idea of the height of part of the building. 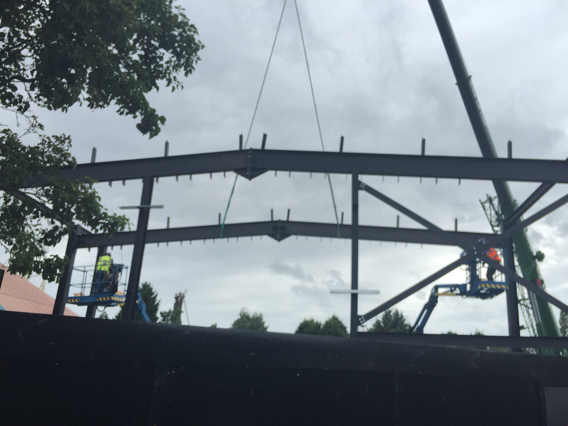 Wow they are really going for it. Thanks for the updates

Going up so quick hopefully be their by the end of the month let's hope this is a good sign that things are running to time and can open opening day :-) Looks like they're really pushing for that early 2016 opening

Users browsing this forum: No registered users and 66 guests
×