Much like Lewis had mentioned, I'm sure Derren will be there at some point for an "official opening" however I really doubt Merlin would wait other wise. This weekend would make sense as he has a spare week - so they could open the ride on Saturday and have Derren there for Sunday.

Whatever happens I'm sure it'll open soon so it's just a waiting game from here on out!

Fingers crossed for this weekend, taking my brother to Thorpe on Monday for the first time so would be awesome. Also won't get to ride it til next year if not.
Top

Not sure if anyone noticed, but Thorpe Park re-uploaded the Ghost Train Ad on youtube.

Sick of waiting now and have no more planned trips and live over 5 hours away, I could cry

Simon_hope wrote:
Me and a mate was on park yesterday and was speaking to a member of staff. The ride is all done now and illusions are set. All they have to do is training, testing and security checks. We also saw two staff members go around the shop making that all items were stocked and checked off. I was very impressed with the shop. However, I go to Thorpe park in the 1st of July and we were told it should be open by them. Could be all speculation by the staff but thought I'd let yous know what I got told

I would assume that basic training has already taken place, but retraining with newly refined effects and features may be taking place now, to bring staff up to date. I know that it's a world's first of it's kind in any theme park, and Thorpe Park will want to make sure this is right to impress everyone, but for the sake of everyone who has planned trips, they cannot afford anymore delays, so hopefully they're happy with the attraction now after some tweaking and testing/training is the final steps before announcing an opening date.

theparklifekid wrote:
Not sure if anyone noticed, but Thorpe Park re-uploaded the Ghost Train Ad on youtube.

Probably nothing really noteworthy (and most likely my geeky side coming out a little here), but having compared the two adverts (they're both still available on YouTube), I'm sure they've enhanced the audio and sound effects in some places on the newly posted one, as well as changing the ride availability to "coming soon".....


Hopefully we won't have to wait too much longer now!
Top 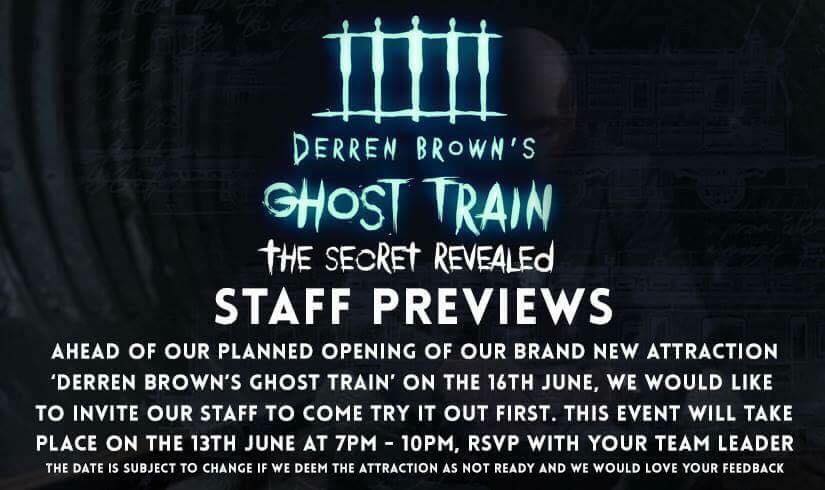 May I ask, where did you get this image from?

It was a Facebook post in a group by someone who works at Thorpe.
Formerly known as NemesisNosh
2016 Ride Count: 888

It seems very odd to me, there are multiple things wrong with it - including the fact the staff member would likely be fired or suffer major punishment for sharing such information outright. I'd suggest not to believe anything that Thorpe Park haven't confirmed, as it does seem very odd!

dannypugh88 wrote:
Plus if it was real it wouldn't say the secret revealed as that was only when the attraction was officially announced

To be honest, Its all a secret. Hardly anyone knows what actually happens inside the big building

But I don't believe it.
Top

I'll be there on Tuesday so really hoping for a soft opening then. Will be gutted if I miss out by a couple of days.
Top

Apparently a source has admitted to "falsely creating the image".

Think we should all just take a minute to think about the fact that people actually spend time creating something like that just to fool people. Bit sad

Back to the ride, over a month since the original opening date and we're still no closer to knowing when it will actually open. Can't see it being more than 2 weeks now but the biggest issue with the delayed opening is that people expectation's , particularly in the enthusiast circle, for the ride will be much higher than they were originally. Thorpe have a lot to live up to.
Top

I'm guessing on a 1st July opening if the 16th doesn't happen it seams that their is something that really doesn't work they first thought that it would take a few weeks to sort a month on and its still not happening ... I think it points to the VR as the rest of the maze will be using standard magic /theater tricks that have been used around the world for many years
Top

I really do hope it is the 16th would make my 4 and half hour trip down really worth it! But like everyone else its only speculation atm.
Top

I'm getting to the point where I no longer care about this. It just feels like its been dragging on. Thorpe Park really need to get it sorted soon as i'm fairly sure other people have started to feel the same way I currently feel which isn't a good thing. It better be bloody amazing otherwise I will be highly annoyed.
Top

Thorpe are now faced with the issue that if it is at all underwhelming in the state that it opens in, they aren't going to be in a position to defend the ride which people have had to wait several extra weeks for, with 'creative' reasons specifically cited for the delay. While it'll likely be easier to impress the average guest, anything less than what's perceived to be perfect will probably be insufficient for enthusiasts.

This could become one of Merlin's worst return-to-investment attractions with it being on track to open halfway through its debut season and the significant loss of hype surrounding it. Although not impossible, it's going to be very hard for Thorpe to generate the same buzz around the attraction when it finally opens, and if they can't do that then they're not going to see the increase in visitation that they would want. If that is the case, Merlin may also struggle to justify budgets as large as what this is believed to have for future investments.

It's a shame that this could go a similar way to The Swarm, with it not delivering commercially for the park to the extent that they'd have hoped. I want to remain optimistic, but it's hard to deny that this is becoming more of a disaster for Thorpe with each day that passes.