Is it open today?
Top

It didn't open until 3pm, got evacuated during the first cycle and then closed (I believe for the rest of the day.

As eager as I am to try DBGT I'm not in a great rush to get down to Thorpe. I'm probably going to wait until Fright Nights to try it as hopefully it'll be a bit more reliable by then.

I was on the first batch at 3pm today (had Ultimate/VIP fast track) and the whole thing was a mess really.

Firstly we waited a good few minutes to get onto the ride as the operators didn't seem to know what was happening, then when we finally got on we only had about 2 minutes worth of the experience and then it stopped due to a 'power cut' despite everything else running okay and the headsets still having power. Everyone on the batch though got free tickets to return and I got free ultimate fast track as the park was pretty poor today with rides out of operation.

Its frustrating though as we waited all day and saw part of the ride then got evacuated so kind of ruined/spoiled the experience, its like waiting a few years for a film, seeing the beginning and then having the thing cut off.

After talking today to a member of Staff he had told me how the system works this was official comments to the new ride
Spoiler: show
The Ride works with 3 trains the victorian carriage is a shell and all three platforms are in one room you just can't see them as there are mirror effects. The 1st train leaves the shell at the end of the victorian carriage into platform one. 2nd train enters platform 3 sideways on a track and 3rd train enters the shell carriage from the side as the shell is half made. All of this is done in way you can not see because of mirror effect. The moment you enter the segment with the train falling into the center of the earth the tube carriage is in fact rocking back and forth and the staff have to hold on to dear life or they'll fall over, and btw the train does in fact move forward very fast in the first vr segment.
Top

Owen wrote:
The extension queue has been whipped out! Credit to Theme Park Guide. 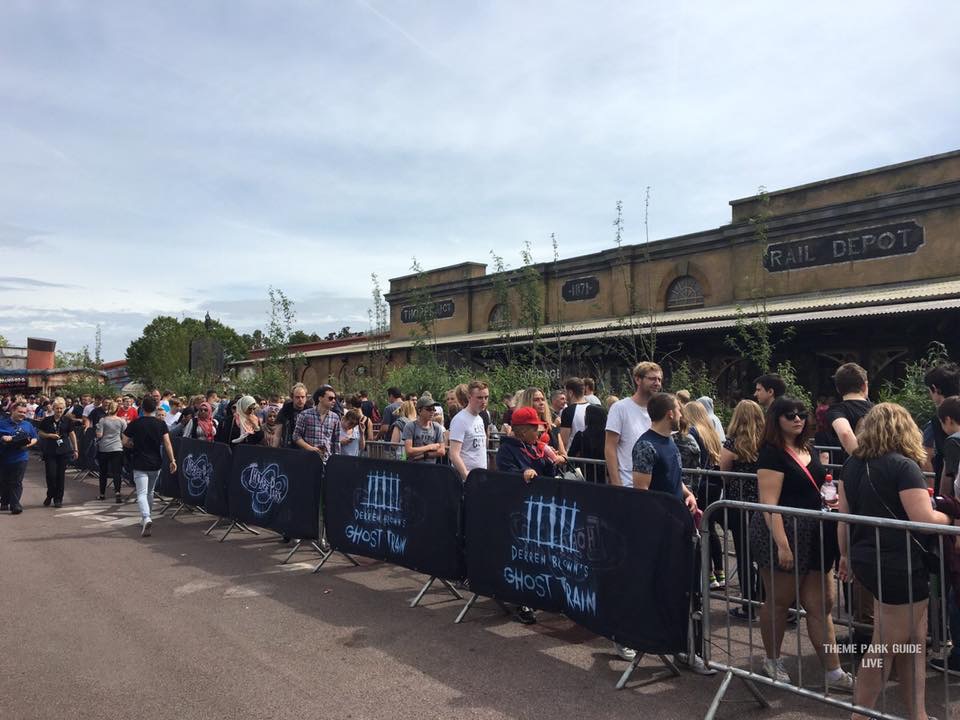 Just noticed that I'm in that photo. Caught!
Top

The worst/best part about this is that, even though I've been on it once, I can't tell what will happen the next time I depart the Ghostrain again! It's both amazing and very nerve rattling for me!

Is it open today despite yesterday's catastrophe?

Its got a "delay" atm
Top

Here's a blog post from Thorpe Park. It tells you about 5 Easter eggs within the attraction to look out for, however this post does include some photos that may be seen as slight spoilers!

Owen wrote:
Here's a blog post from Thorpe Park. It tells you about 5 Easter eggs within the attraction to look out for, however this post does include some photos that may be seen as slight spoilers!

Images wont load on my end!

I'm not the one for writting reviews so bare with me. After arrving at TP around 12pm, we headed for Darren Brown, after seeing the lovely 110mins que line we decided to bite the bullet and join. It has to be said the theming on the outside is up there but issue I found was two photo spots, which I found just head and slowed the que down a lot. After finally getting inside we took our seats on the ride and was told there was a delay, 20 mins and nothing we got told to exit the ride and was offered fastrack or to stay and wait, we waited purely due to the weather. Without revealing the ride after the 2nd part of the ride we encounter another delay, Cutting to the point I found my self very disappointed and overal gutted with the whole ride, It lacked substance, story and just the wow factor. It feels like the concept was a brilliant idea which never quite got the finished product, few faces when I walked out had the expression of "Was that it" I'm sure the delays didn't help but I was impressed with all the theming and staff. Of course this is just my opinion and everyone will be different but for me it was very meh. 5/10. Hope your all still awake

If the ride does not run through smoothly then it's definitely going to ruin your experience, I think we got lucky Friday, it still seems like technical rehearsals even though it's officially open now, I reckon it will continue to improve over time.
Top

I don't think I can justify writing a report and my honest opinion about DBGT yet, as I only been on it once. If the experience/storyline would have been the same, that would have been a lot easier. However, I would like to experience at least two more different scenarios until I can give an insight on it (and spoiler-free).
But for my first ride experience, I was quite impressed with the build-up, the theming and the actors inside. Truth be told, the two photo booths slow down the queue dramatically. At some point while I was there they decided to ditch both of them in order to get the line going, so I wasn't able to get any kind of photos yet.
And what happened inside the building is going to be a secret (for now at least!).

What I'm really curious about is how the different stories and endings are cycled through. Is it random for everyone? Time based? Depending on which group you're in?
Top

Having been on the Ghost train today, I can say i'm really impressed with it. It's just what I imagined and more. Obviously i'm not going to spoil it for those who haven't been on however I did find that the VR in one section was out of focus and I struggled to adjust it correctly meaning I had a slightly blured image at the start of the experience. Apart from that one downfall which is down to my inability to adjust the headset properly

It's an awesome attraction which I can only see getting better and better over time. Can't wait to try the new scenes in the future

I then went on it twice more that day and it really grew on me. The VR is a lot better than
Galactica's and I managed to get all 3 variations on the start. It is a very unique attraction and a couple of the starts are actually quite chilling. Most normal people on it also seemed to be very scared and absorbed in the experience.

Overall, Ghost Train is rather amazing, it just needs a couple of tweaks to make it flow better and keep up the tension so I'll give it 8.5/10. I now need to buy some of the quality merch as it is beautiful and I need it.

Been to TP today and rode DBGT, Still trying to peice together how it all works ? Anyone help?
Top

I was there today aswell. I don't want to know how it works, the whole thing impressed my socks off and that is that.
Top

JamesM251 wrote:
Been to TP today and rode DBGT, Still trying to peice together how it all works ? Anyone help?

Also interesting fact about DBGT the left of building where the wooden gates are there are stairs leading to a door the operations booth is there.

They obviously have cameras all around the ride and to think how exciting it would be to see the works of this ride.

Thorpe Park should do a Behind the scenes tour
Top

thorpeparklocal wrote:
Thorpe Park should do a Behind the scenes tour.

Users browsing this forum: No registered users and 18 guests
×