Indishor wrote:
So just to reiterate... All bets are off in my opinion now. The attraction is a maze.

Or it's just another example of Merlin miscommunication/confusion.

If you want to keep up the game of speculating then be my guest, but I really think it is a maze.
If it is costing as much as we are told, then I wouldn't worry. It will probably be the best maze in the world with some quality acting involved.... but it is a maze. So forget about the logistics of everything else... It is a maze.
Top

Well it's not a maze.

The simple proof of this is in the planning application which shows a loading and offloading platform along with a series of evacuation points.

So carry on speculating.

Furthermore, please do not instruct the forum what they can and cannot discuss, that's our job, ta muchly.

Adz wrote:
Well it's not a maze. So carry on speculating. :-)

Whether or not they add a cheeky drop ride at the end is irrelevant. The attraction as a whole is a maze. I envision be led round different areas, seeing different things and then maybe a ride of sorts at the end.... But ultimately it is a maze.
Top

It's not a maze. The guy who told you that wouldn't revel that information to a member of the public if it were correct.

Now - we know this is a multi layered experience, so it may very well contain a maze like moment - but that's to be seen in the future.

No maze in the world would take up the surface area (and height) of that building. 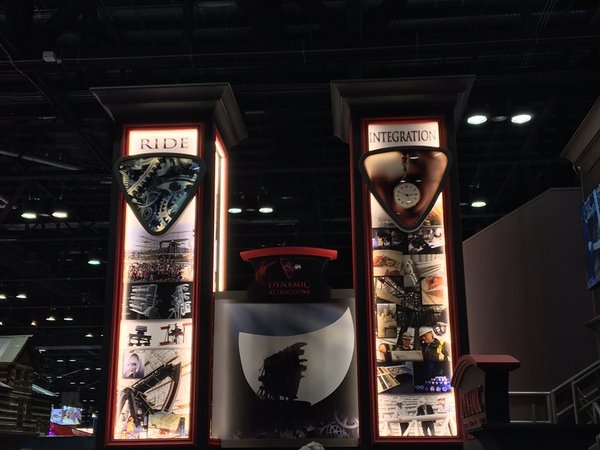 this is part of the dynamic atractions booth at iaapa. It shows cogs and other marketing material such as a pocketwatch on their sign so they could possilbly be the manufacturer. Its just a bit of speculation but i thought i should share... Adz wrote:
Well it's not a maze. So carry on speculating. :-)

Whether or not they add a cheeky drop ride at the end is irrelevant. The attraction as a whole is a maze. I envision be led round different areas, seeing different things and then maybe a ride of sorts at the end.... But ultimately it is a maze.

If that's what you're expecting, prepare to be blown away.

this is part of the dynamic atractions booth at iaapa. It shows cogs and other marketing material such as a pocketwatch on their sign so they could possilbly be the manufacturer. Its just a bit of speculation but i thought i should share...

Interesting...what I find interesting in particular is that their website states a 2nd gen robotic arm ride is in production, first one to open in 2016. Does anyone know if any are confirmed for next year elsewhere? Wishful thinking though. But they do have a trackless ride model, I know that idea was floating around on here a few months ago by a different manufacturer.

Update: I've done some further research, and the 2016 robo arm could well be for the new Harry Potter ride. But it is intriguing me, the theming for booths often relate to some previous rides, but I can't think of any obvious connection to any of their existing rides. But we could be reading too much into it, but I guess that's what a speculation thread is for!
Top

With regard to the guy who said the ride was offensive, airgates spoke to him again recently and he clarified

and the source code doesn't offer anything new, end of November should see a third film unless when those images we saw prematurely brought about the reveal of DB forward.
Formerly known under username Andy Mc
Top

OK so i've done clues 2 and 3 but for some reason 1 is saying look at the video for clues?

I've typed what you have to in the browser,
I presses left down right and all that in the three different ways,
But I came on at 7:30 and nothing happened perhaps this is where i'm stuck?
any helpers?

Try logging out and then back in shortly after 7.30pm to complete the first clue.

Im rly curious as ive missed all of this, i havent been on in a while. Whats going on???

TheBeast wrote:
Im rly curious as ive missed all of this, i havent been on in a while. Whats going on???

This SouthParks news article covers everything we know so far.

How do you complete the clue (seses!!

) On the minds wanted website? It won't let me!!
Top

Anyone been able to access the fourth clue? It still comes up as locked for me, and we're way past mid november
Top

Forget 4, I cant seem to get 1. Is one literally to watch the video or do you actually need to do something for it?

From my understanding, in order to complete clue 1, you simply just need to log in to the website between 7:30 and sometime like 8:45 (although I'm not sure on the ending time). I would suggest logging out sometime before 7:30 and then logging in after 7:30 and hopefully you should do it.

In other news, Dynamic attractions has a new product called the Circumotion theatre. Its a 360 degree round dome room which rotates, tilts and drops. That seems like a definite possibility to me at least!
They've also stated that "The first CircuMotion Theater will open in 2016." So it could be?

EDIT: They've also stated that the first of their 'Robot Arm Rides' will open in 2016. Could it be that?
Top

^ I thought the CircuMotion theatre as well (really like the idea) but imo the building wouldn't house such a thing, the building trenches and structuring could suggest an immersive tunnel though as mentioned before.
Formerly known under username Andy Mc
Top

I am very excited about Thorpe Park's new 2016 attraction. I already love the basic theme and if we end up seeing an immersive tunnel or advanced simulator ride I believe it will be a high quality attraction. My only worry is that it will be undoubtedly difficult to capture the essence of confusion, and I sincerely hope we do have our minds "derailed" as planned. I've been longing for an attraction that moves past the boundary of the physical experience of a thrill ride and truly messes with your mind, therefore leaving guests actively thinking about the experience for hours afterwards. I feel that this attraction could be a perfect addition to the UK and Thorpe Park, especially with such a large budget.
Top

If dynamic attractions are indeed the manufacturer (the use of the same promotional imagery as Merlin is a pretty strong indicator), then it looks much more likely that this will be a new gen robo arms ride.

Trackless dark ride wouldn't even be a Europe first (although they could still do something interesting aside from the ride vehicles to make it a world first) , the round theatre doesn't fit the plans or what we've seen of construction (although if AT are replacing Hex, I'd love to see them install this one of these in its place).
Top
Post Reply

Users browsing this forum: No registered users and 94 guests
×