That's some extremely specific wording there, suspiciously so.  Fingers crossed for a Tiger Rock makeover...

If it is gone for good they absolutely need to replace it with a good family ride.
Top

So the Twitter language for Logger's Leap has gone back to being under redevelopment, with a hope that it will "splash back" soon. The person asking the question about Loggers status did query their previous messages that it was no longer an attraction and got the second reply.

So good new for Logger's? Or bad news for a potential roller coaster in the area?

Although given the state of the site, seemingly leaving it to rot is a strange way of redeveloping it back into a usable state. 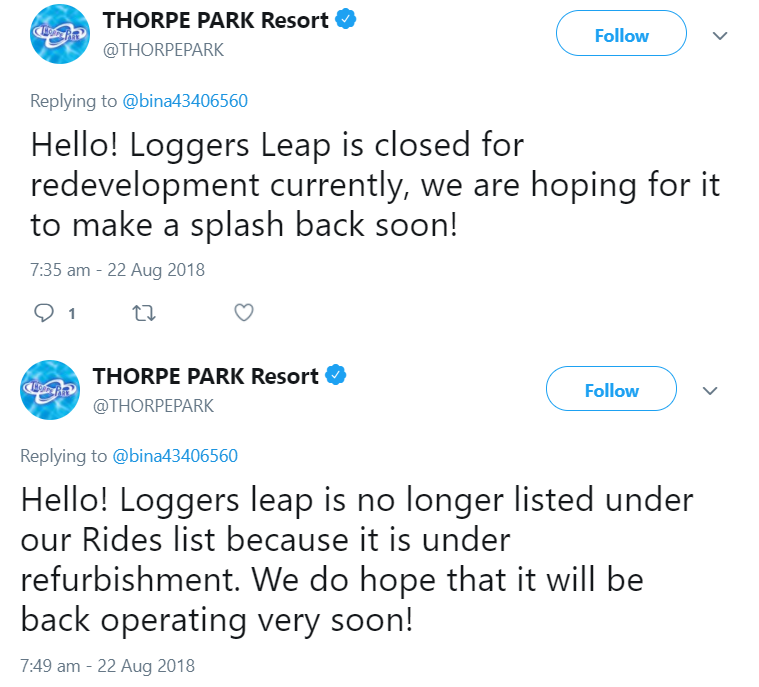 Surely it just means someone else is answering the Twitter with a copy and paste??
Top

Qzzb_UK wrote:
Surely it just means someone else is answering the Twitter with a copy and paste??

I'd expect that statements about Logger's have been copy/paste jobs for a fair while, to ensure the same message is given regardless of who is managing the account that day. Assuming someone hasn't got old information, as this is pretty much the reply they gave over a year ago to people asking, then this is a turn around of the previous message that was given several times a few months ago stating that Logger's was no longer a ride.
Top

I have never known thorpes media team to be that consistent at the best of times. So anything on there I wouldn’t pay too much notice to about upcoming stuff.
Top

Could this be a subtle hint that Loggers opens back up finally in March?

It could be Thorpe playing with us. They are well known of doing that!

Been burnt too many times by their social media. In my view they seem to think that continually suggesting things they know not to be happening, to get a response online, is good marketing. Bonus if they can then get people in the community to mock others for "falling" for it. Given they couldn't even get the basics correct like opening dates and parking charges, I think the social media is far disconnected from any actual management decisions and information. Personally I just ignore them now, unless it is a branded official announcement.

From the state of Loggers Leap, I would find it highly doubtful to be returning, especially in the new year. It would probably need 12 months of work to get the site back up and usable again.
Top

Just so you guys know. Thorpe have confirmed that's not actually from Logger's Leap. It's from Rock Express's queue line. It's just little hearted teasing

Yep, about to say, right on cue from Thorpe. 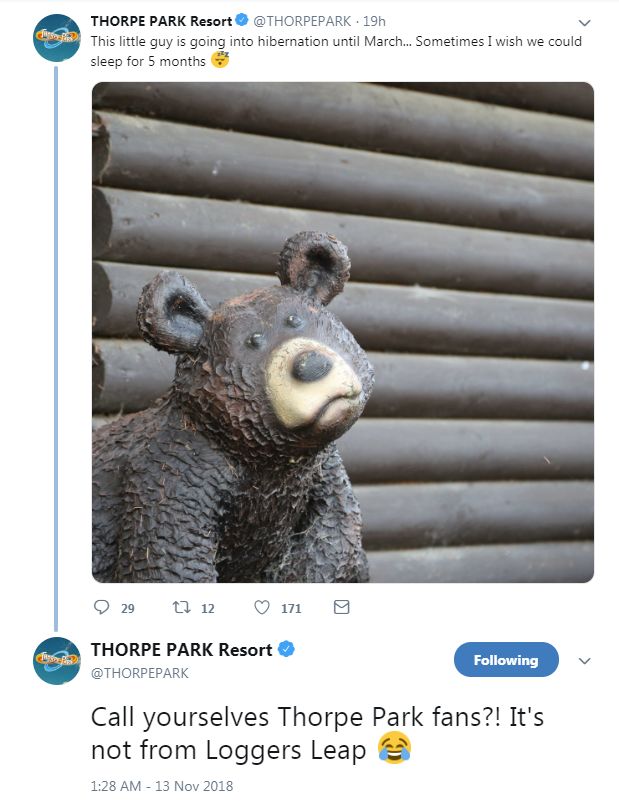 Well, I should have seen that coming... I'll have to try to be a bit more conscious next time!
Please! No more IP's Thorpe! I'm begging you!
Top

They can't be trusted

In a way, it could devalue their social media channels if they post too many as wind ups as people will think their posts are unreliable.

They could have stated it was Rocky in their original post, but instead the lead people and got people again

Justin wrote:
They could have stated it was Rocky in their original post, but instead the lead people and got people again

But yep, I can see their social media following a The Boy Who Cried Wolf style fate, with no one believing them when they actually have something to say. I know I won't until I see the plans listed with the local council.

But on a positive side, their later post gave a little bit of insight into winter work at the park. Whilst this is completely unrelated to Loggers, I hope we see more of this style of content from them and a bit more behind the scenes of actual Thorpe Park things. As they're clearly wanting to talk to us all over the closed season.

Okay, the trolling is in full swing. Thorpe's Twitter quickly posted and deleted #loggersleap2019. Couldn't get a screenshot, all I got was the notification and when I checked it had gone.
Please! No more IP's Thorpe! I'm begging you!
Top

I'm fairly sure there was a big Merlin staff celebratory event last night.

I'm guessing these events generate a reasonable amount of silliness between the staff, and may even include some alcoholic beverages to allow them to blow off steam and celebrate the year that has happened.

I'm going to go out on a limb and guess that some poor judgement, mixed with the celebratory environment, mixed with Thorpe's predisposition of causing drama and hyping things that aren't happening, may have occurred last night.

If so, then remember kids: don't drink and tweet.

Htjc_ wrote:
Okay, the trolling is in full swing. Thorpe's Twitter quickly posted and deleted #loggersleap2019. Couldn't get a screenshot, all I got was the notification and when I checked it had gone.

No clue if this means anything at all, (probably doesn't)

Sadly, this won't mean anything. If you put in https://www.thorpepark.com/rides/slammer or any other recently closed ride the same thing happens. They will have just found it easier to redirect you than delete it or they could be keeping it for archival purposes. Sorry to ruin your fun.
Please! No more IP's Thorpe! I'm begging you!
Top

The Thorpe Park website is a little odd in how it works and gets updated. The downloadable park map on the front page is still from 2016 and it took them until the second week of Fright Night's to update the queue times page with this year's attractions.

My guess is that it was taken offline via a redirect several years ago and no one has had to update that part of the site since.

Good to have people poking the site to see if there's anything hidden there though.

Edit: And again, as if on cue, one of their websites has broken because they've forgotten to pay the bill. The official Thorpe webpage for ride times is no longer owned by Thorpe.

Thorpe Park have announced that Loggers Leap won’t be returning and that parts from the ride will be auctioned off!
Top
Post Reply