THE BIG TOP clown face has now been placed. Credit to thrill nation. 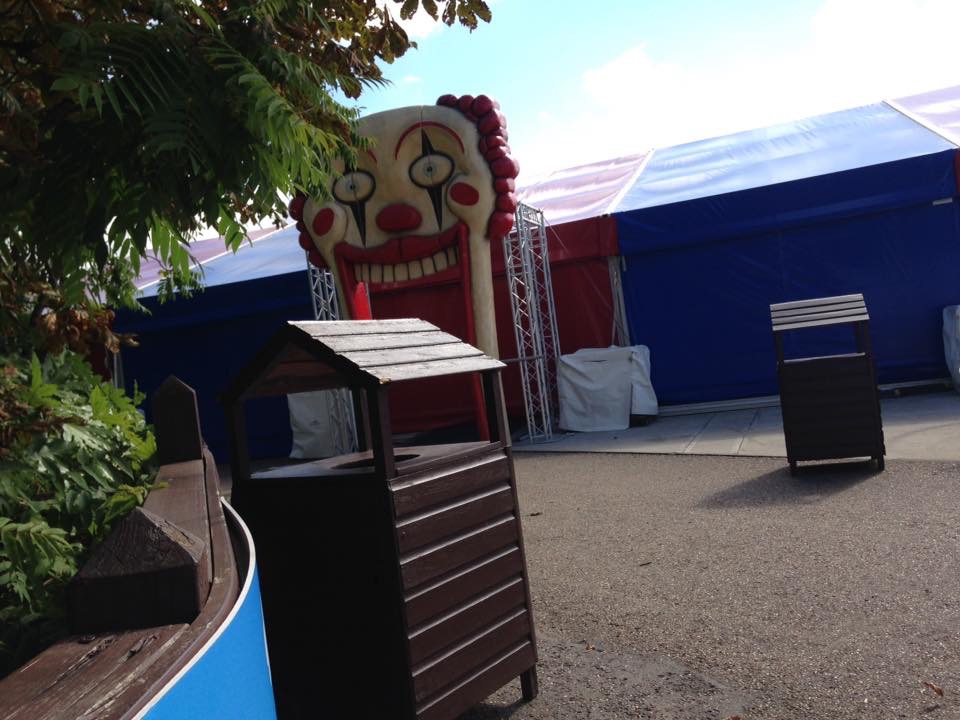 does anyone know if there is going to be a Annual Pass Preview night this year?
Top

Hexparadox wrote:
does anyone know if there is going to be a Annual Pass Preview night this year?

Yes there is, but forgot the exact date.

Is the Big Top going to be an indoor only maze this year? Certainly looks that way from what I can see.
Hopefully it flows better than last year as personally I thought it was a let down.
Hopefully the scare factor will be upped and the scripted parts kept to a bare minimum.
Top

CJH wrote:
Is the Big Top going to be an indoor only maze this year?

Thorpe Park have posted this trailer for Fright Nights to their YouTube channel. It seems to focus on Platform 15 with some nice visuals, along with the usual small clips of jump scares within the attractions. https://www.youtube.com/watch?v=TcwkgWm8ES4
Top

Fright Nights update minus images as I didn't really get any good ones.

Big Top - As mentioned previously, the giant clown face facade has been added. That's all I could see.

Containment - A tent has been added, like last years, to the front.

Cabin in the woods - Some giant rocks were outside the entrance.

Blair Witch - Bigger shed, but I'm sure we already knew that

Platform 15 - Couldn't see much, but a metal fence like thing has been added along the side of the track. Can't think of what it is actually called

Another view of The Big Top entrance from Thorpe Park Mania... 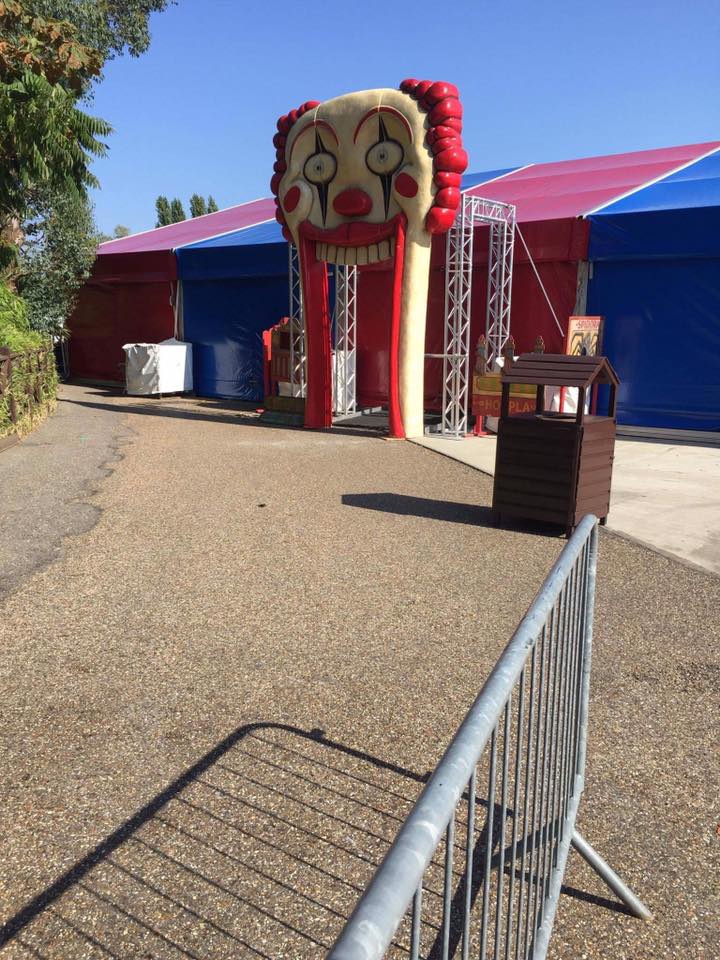 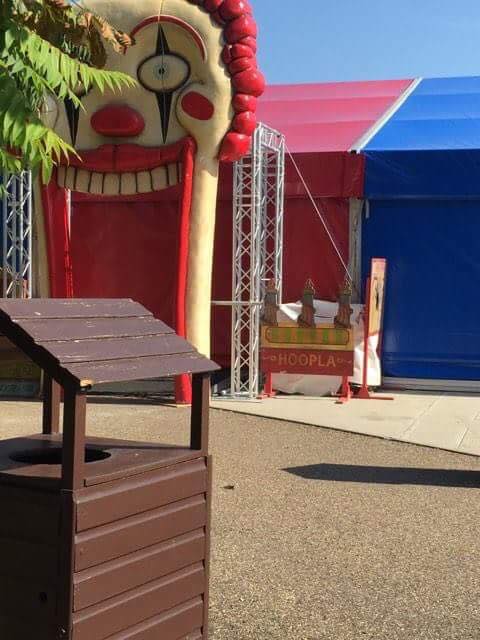 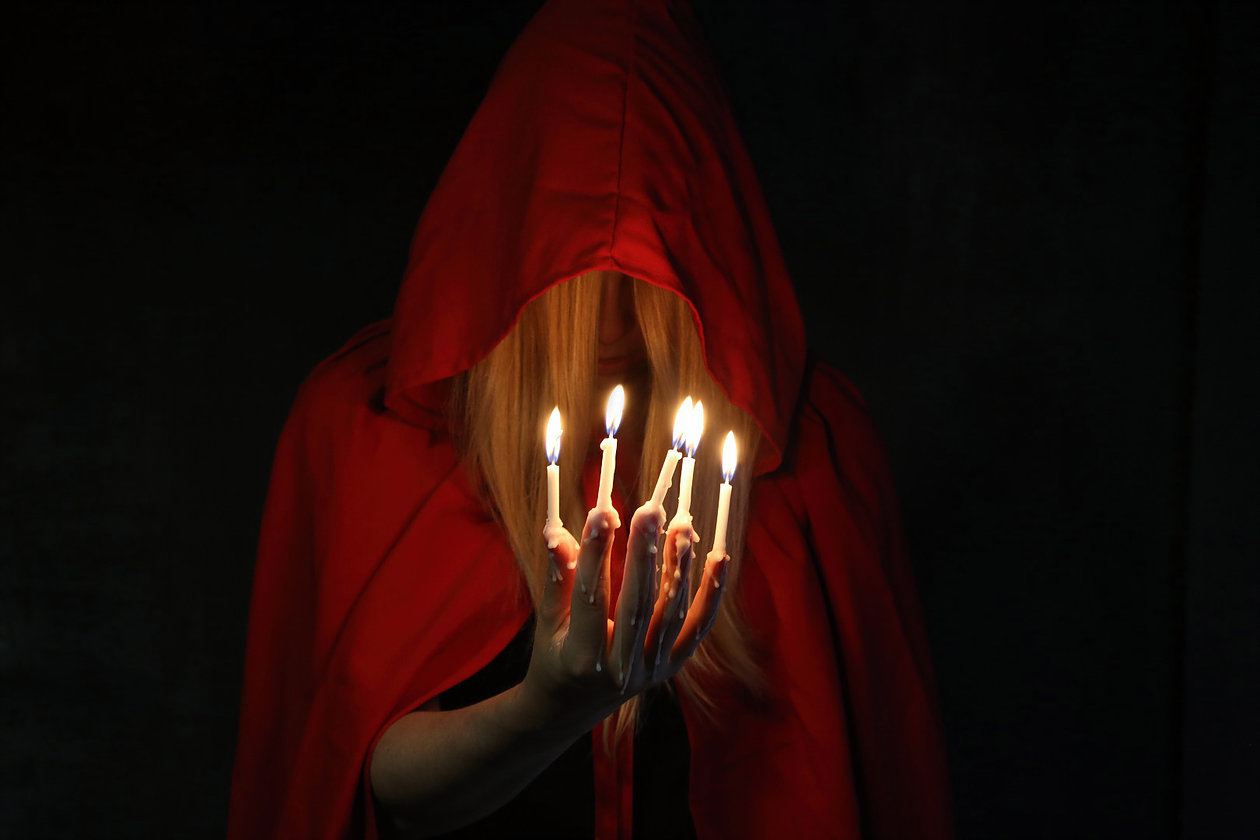 "Take your turn to walk the Island’s back roads which have never before been accessible to the public. Guests will face a deserted railroad, explosions, séances, Ouija boards and pitch black forestry. They may also find themselves hunted and chased in the depths of the forest, so they must tread carefully and not disturb the grounds – zombie ‘Sleepers’ hidden amongst the trees may awaken."

The maze is one of the largest maze ever created at Thorpe Park covering 450m of previously publicly closed off land.

In its brand new location. Thorpe Park have promised even more clowns...

Blair Witch is set to have changes making it even more terrifying - expectedly to tie in with the new sequel currently in cinemas!

As previously stated guests will vote on Facebook which actors they want to roam the park after dark... 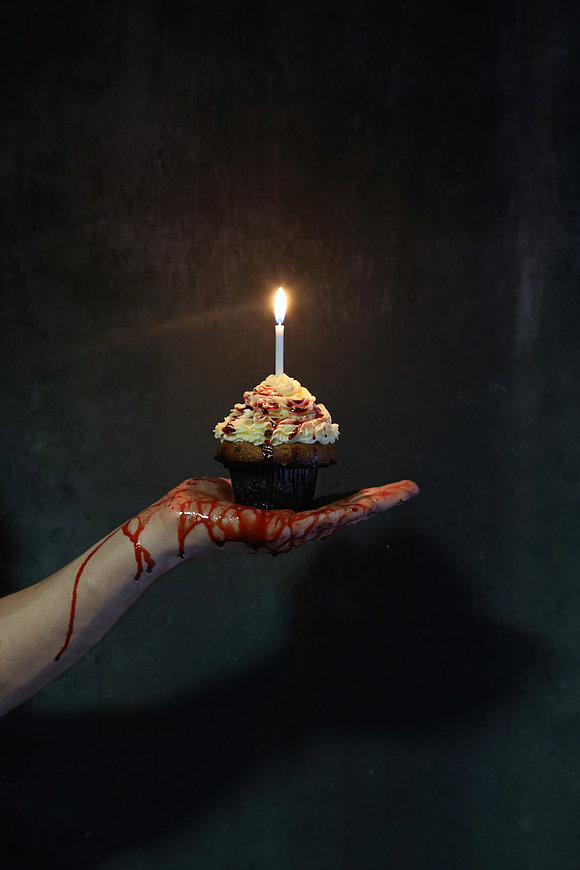 As Owen mentioned, the Resort have released more information regarding this year's event. SouthParks News have in detail at all the latest info.

I'm certainly intrigued to see how Platform 15 works, especially with indoor and outdoor sections. I also really hope THE BIG TOP manages to fulfill its potential this year. For me, CONTAINMENT has allot of work to do to prove itself, if its the same puzzles as last year I will feel kind of let down.

Platform 15's "explosions" certainly sound exciting! Given some of the features that are described, hopefully it will have a more successful debut than The Big Top, however with such a long route there's the potential for it to have some deadspots if it doesn't have enough actors or sections don't come across as particularly tense.

Unfortunately, it doesn't seem like I'll have the chance to get to Fright Nights this year, but I'm excited to hear how all 2016's attractions turn out.

ladyofthelake wrote:
For me, CONTAINMENT has allot of work to do to prove itself, if its the same puzzles as last year I will feel kind of let down.

From what I saw earlier in the year, it was completely gutted. Hopefully it will be reworked as it didn't feel 100% solid last year. Saying that, I'm not sure if I will give it a go this Fright Night!

Platform 15 sounds fantastic. I'm also interested to see how The Big Top plays out. Hopefully it will build upon last year's maze.

Thorpe Park VIP section has been updated. All available to book now.

Here's a promotional poster for the new and improved Blair Witch! 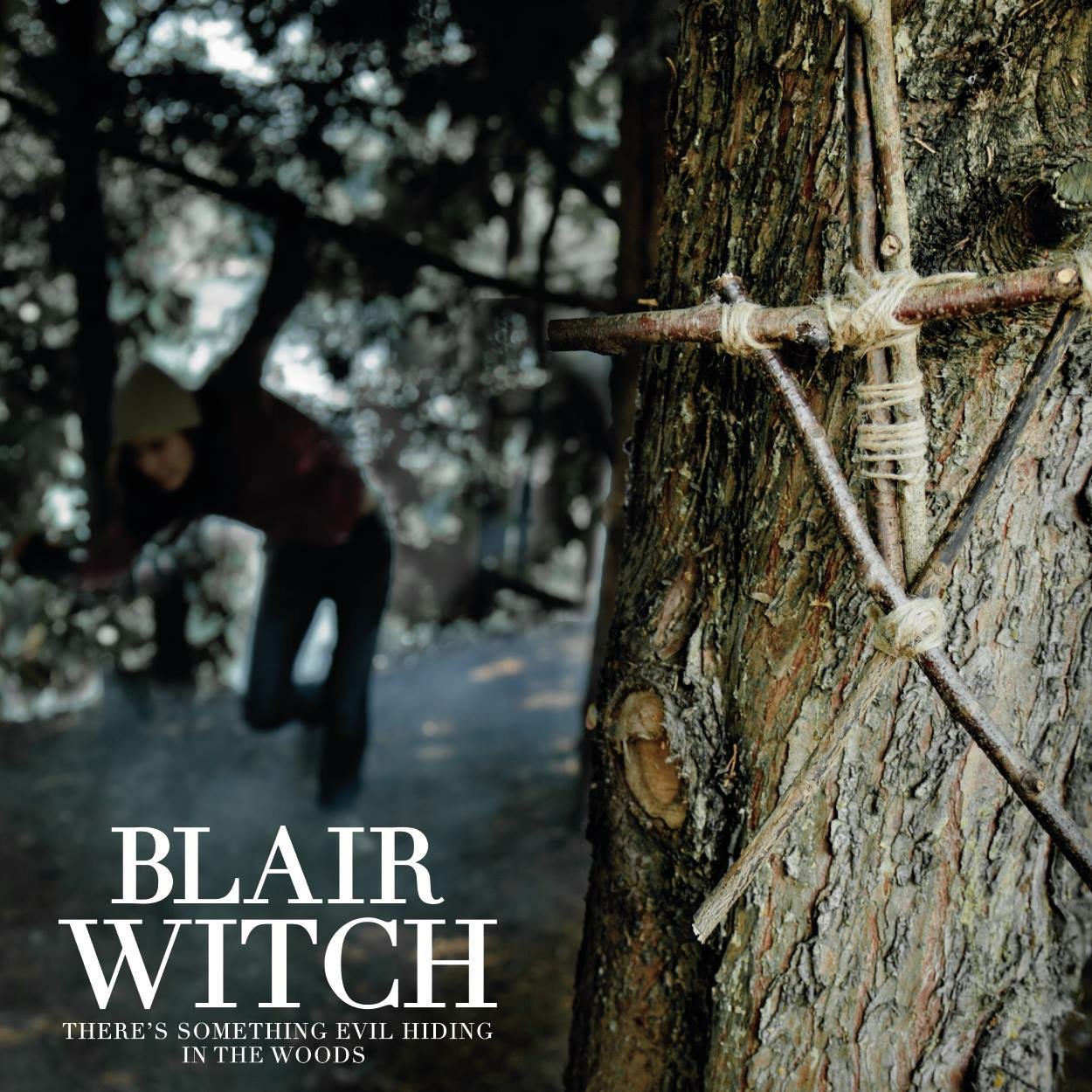 The THORPE PARK website has also been updated to include details of this year's maze experiences.

Platform 15
NEW FOR 2016, take your turn to walk The Island’s deserted railroad, in the newest live-action scare maze to join the FRIGHT NIGHTS line-up, PLATFORM 15.

Depart on a one-way ticket and trek along the overgrown railway line, the last known route of the vanished locomotive – the notorious Sleeper Express.

Don't lose your tracks and risk disturbing the haunted souls that were once aboard, where you may just experience the same chilling fate. Can you outrun what lies at the end of the line or will your journey terminate here, at PLATFORM 15?

NEW for 2016, FRIGHT NIGHTS reintroduces BLAIR WITCH - the maze. Released in cinemas September 15th, experience the horror-movie game changer for yourself and venture into the black hills woods to discover the truth behind the legendary Blair Witch.

Find it: the old Canada Creek Railway. Open from 7pm

Twist your way through this scare maze set at an abandoned carnival on the island’s Amity Beach, while former entertainers of the once famous Figaro Bros. Carnival comes back to life to haunt those who dare to trespass.

Find it: on Amity Beach. Open from 3pm.

In groups of ten, you'll be locked inside one of four haunt rooms, inspired by many of the UK's worst nightmares, and tasked with breaking the codes to make your way through to the end… all in hopes of finding the antidote to a spreading infection. Will you and your team surrender to the outbreak or have what it takes to breakout of CONTAINMENT?

Find it: behind Depth Charge.

A UK first: choose your own fate in an award-winning maze so disturbing and disorientating you’ll be desperate to escape. But the route to safety is never easy.

Find it: next to Colossus (behind X). Open from 3pm.

A serious test of nerves with each room a disturbing scene from the shocking SAW films. Escape the puppet's sadistic games…if you can.

Thorpe Park uploaded some pictures of the interior of The Big Top today on snap chat.I can't upload the images but it seemed to take a funhouse approach with lots of masks, hanging bags and game stands etc. It almost looked like an abandoned jungle gym. I could be wrong but one of the pictures also seemed to show an area of raised floor in a bridge format. This seems like a very different approach to last year so we could see some massive improvements.
Top 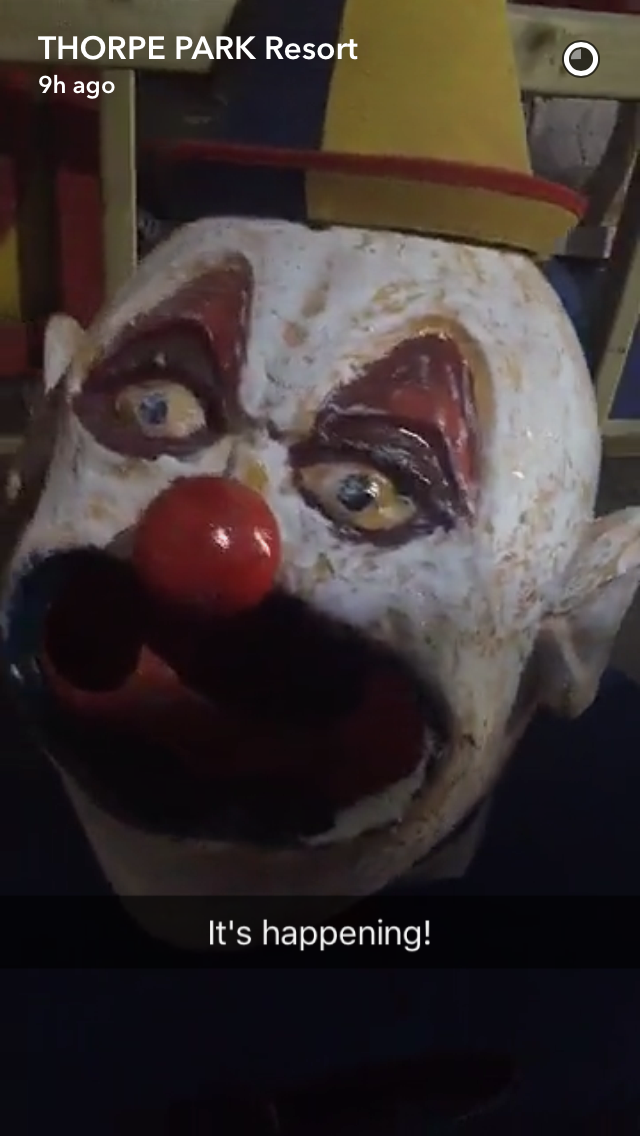 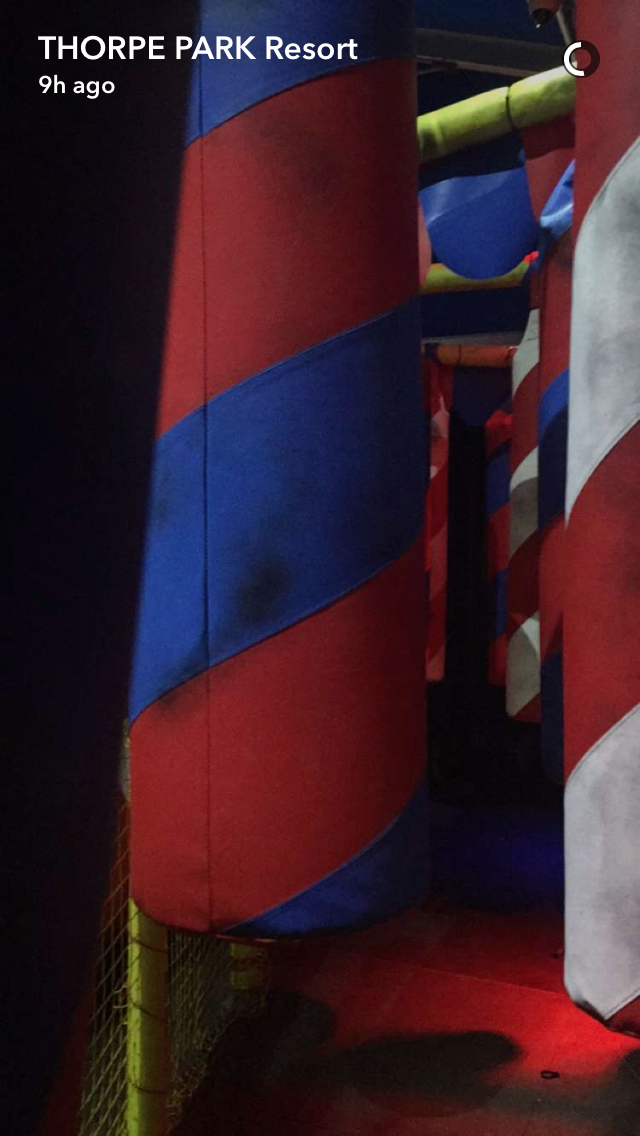 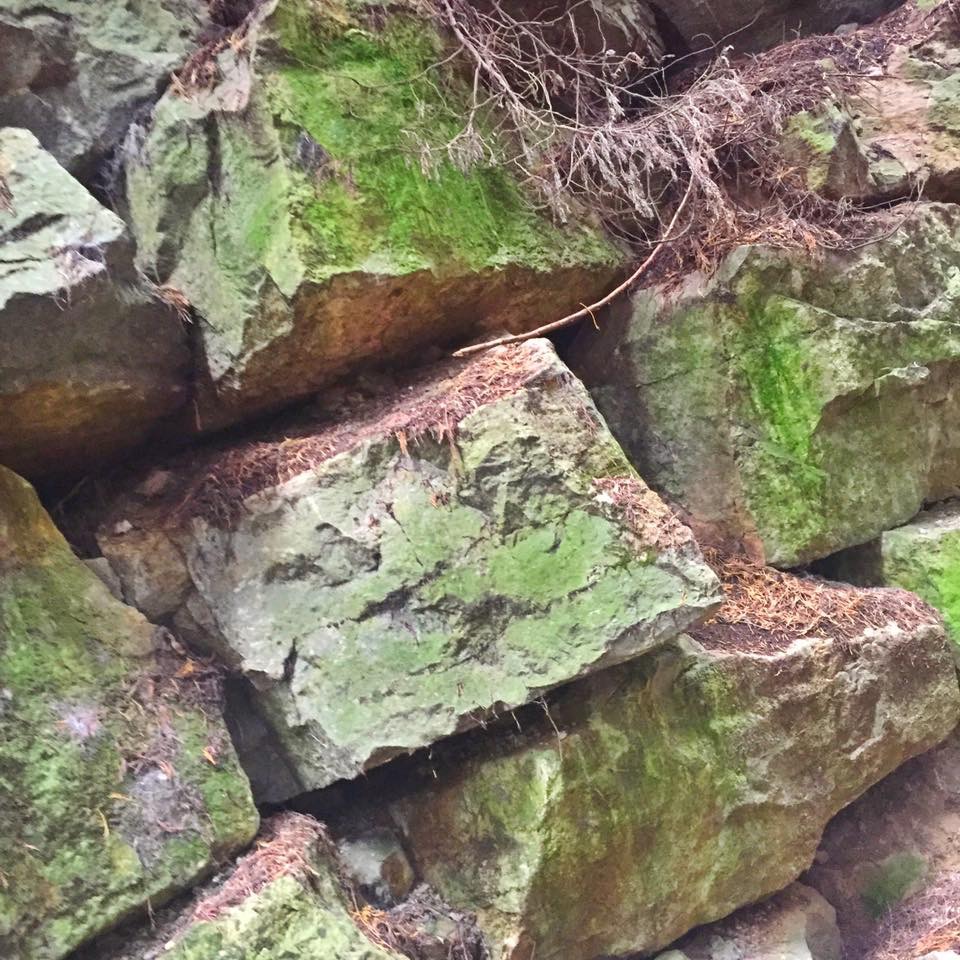 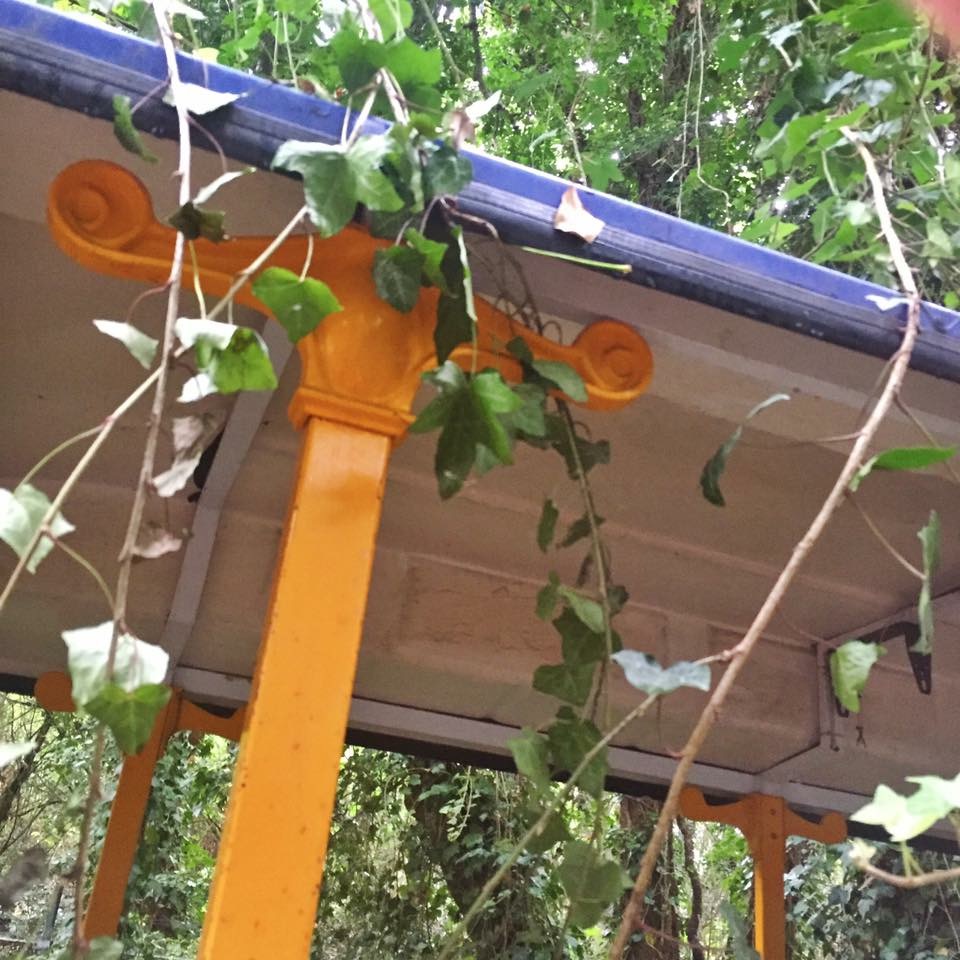 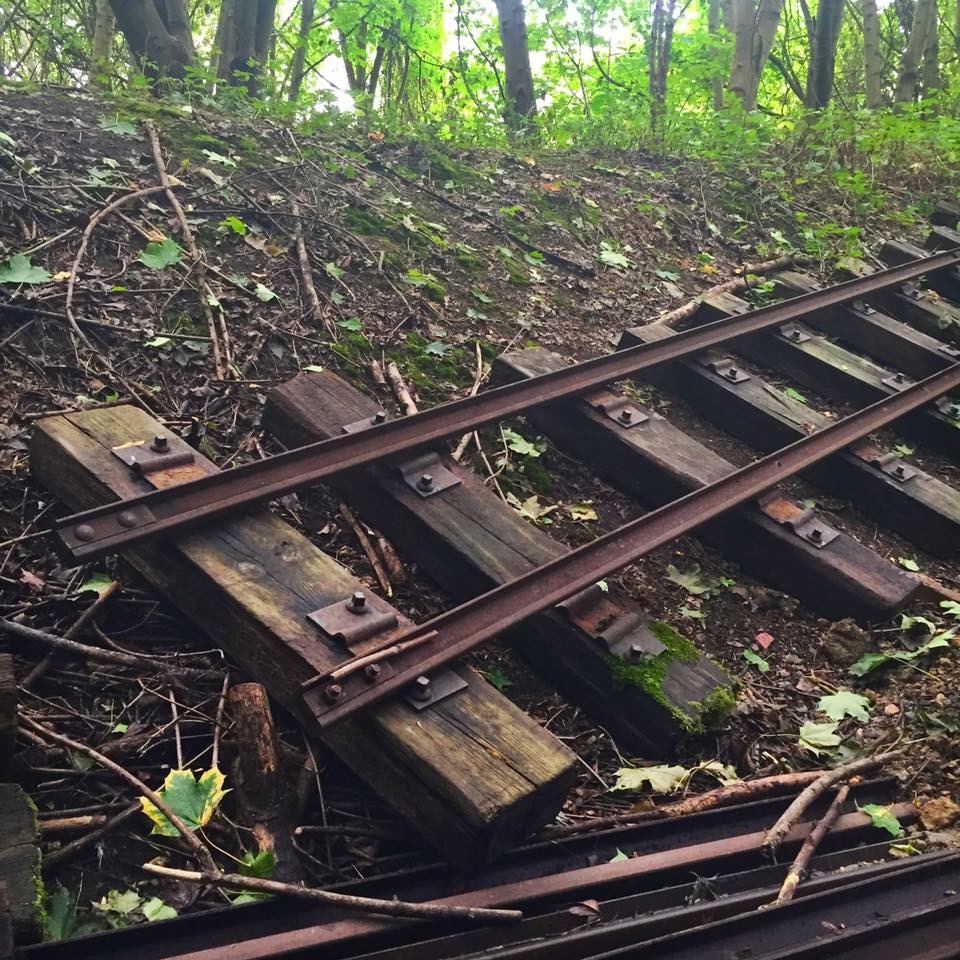 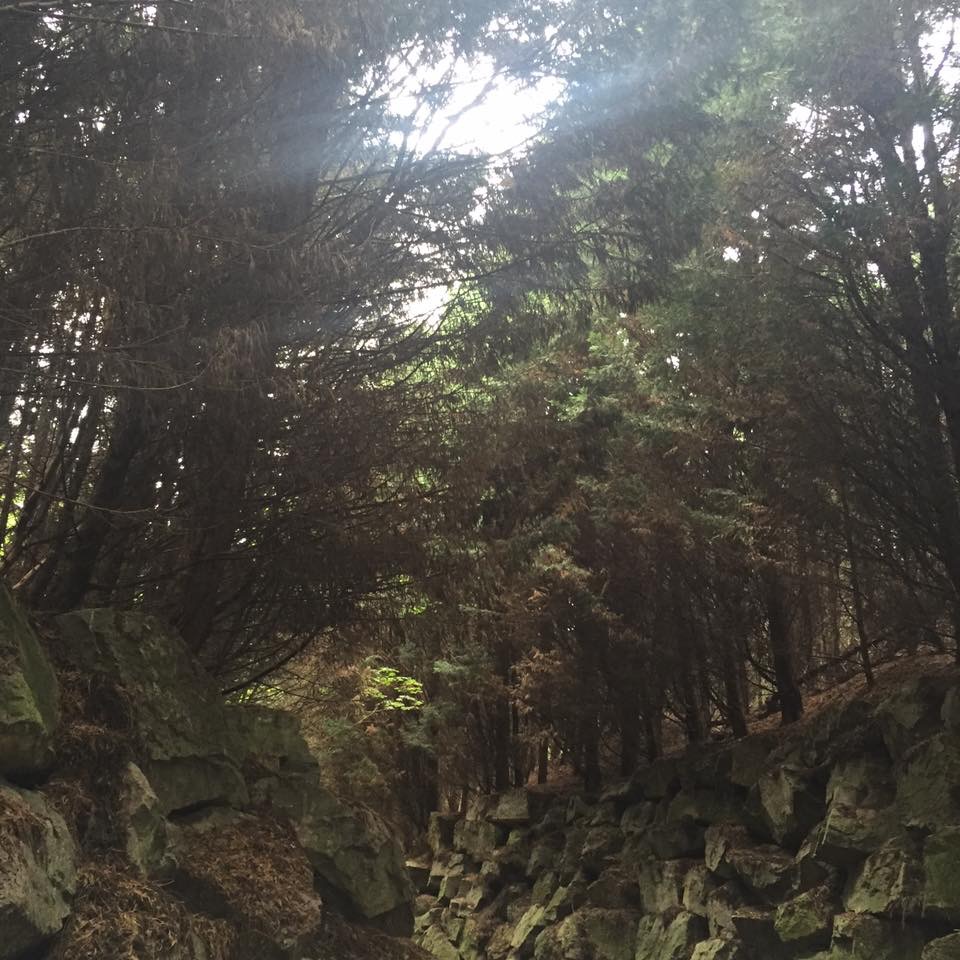 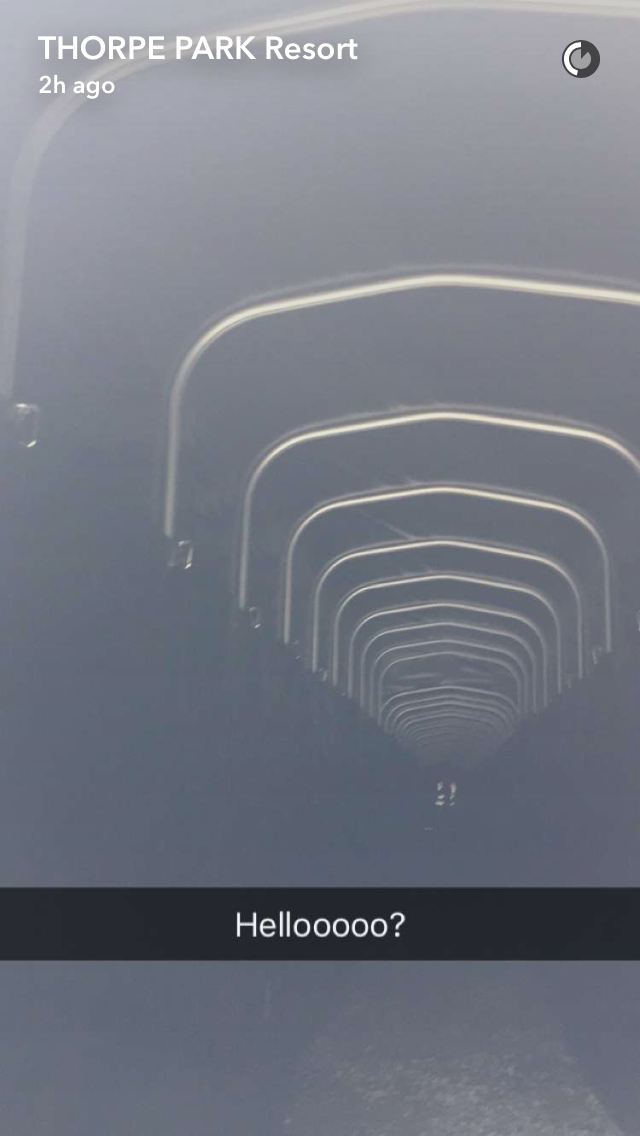 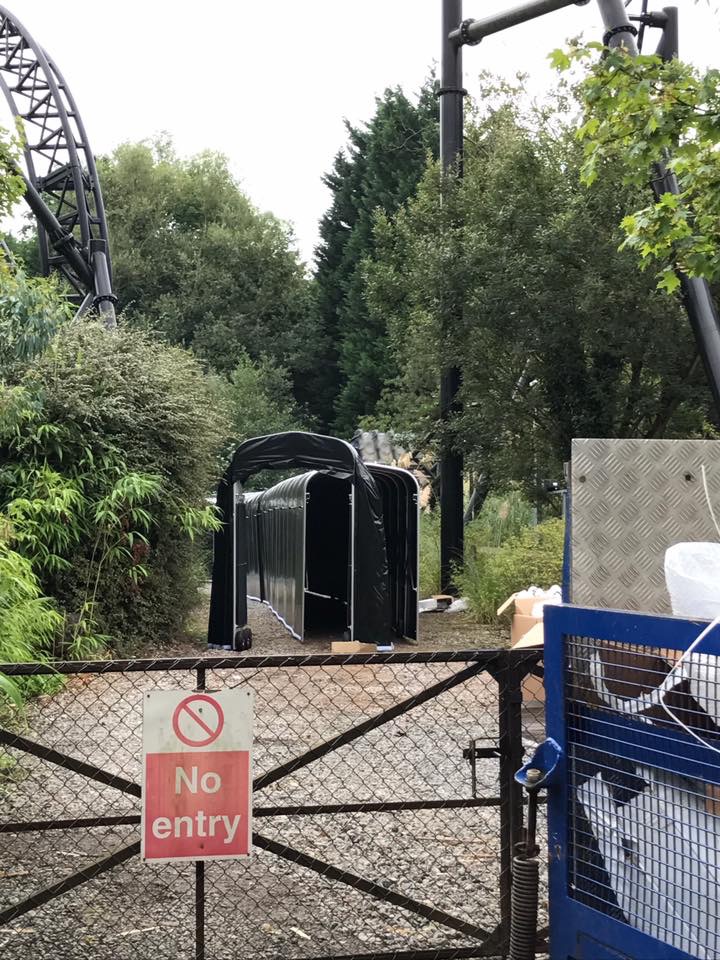 It's certainly going to be an atmospheric experience!

Here's the Fright Nights 2016 map! The mazes have a dedicated information box in the top right! 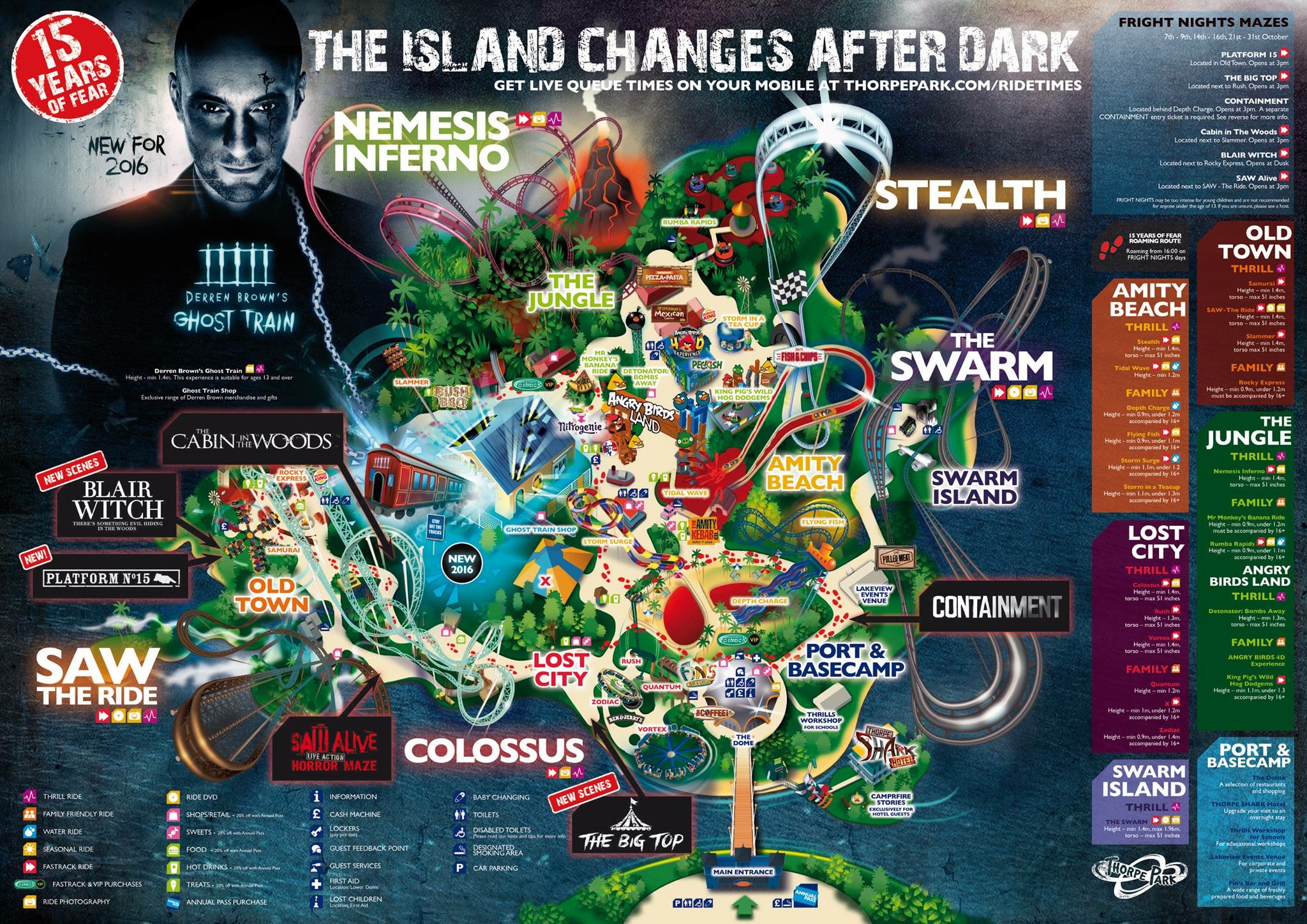 The map also shows a dedicated roaming actor route - shown by red footprints. It also seems the official styling for two mazes has now changed with both "PLATFORM 15" and "BLAIR WITCH" being capitalised.

Thorpe have posted the following image on their social media channels which gives a little more insight into the narrative of Platform 15, as well as confirming that guests will enter the maze via CCR's old station. 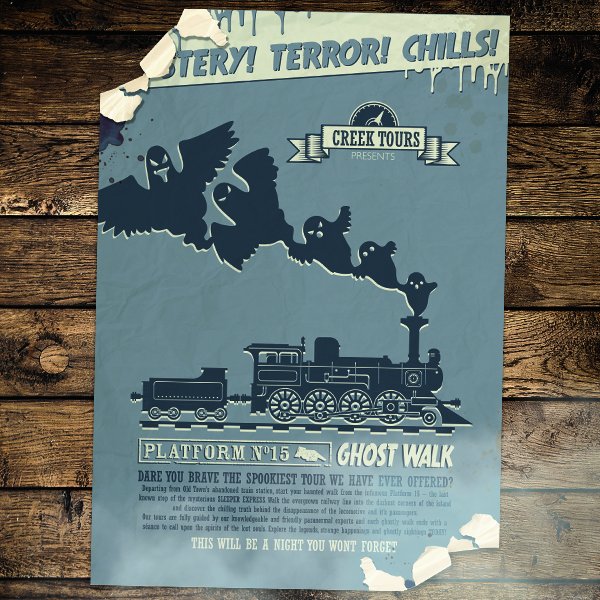 I've tried to decipher the description at the bottom of the 'poster', although can't seem to figure out the very last word.

Departing from Old Town's abandoned train station, start your haunted walk from the infamous Platform 15 - the last know stop of the mysterious SLEEPER EXPRESS. Walk the overgrown railway line into the darkest corners of the island and discover the chilling truth behind the disappearance of the locomotive and its passengers. Our tours are fully guided by knowledgable and friendly paranormal experts and each ghostly walk ends with a seance to call upon the spirits of the lost souls. Explore the legends, strange happenings and ghostly sightings ___ !