Swarm Chris wrote:
Just going to leave this here... you may need to zoom in a little bit. 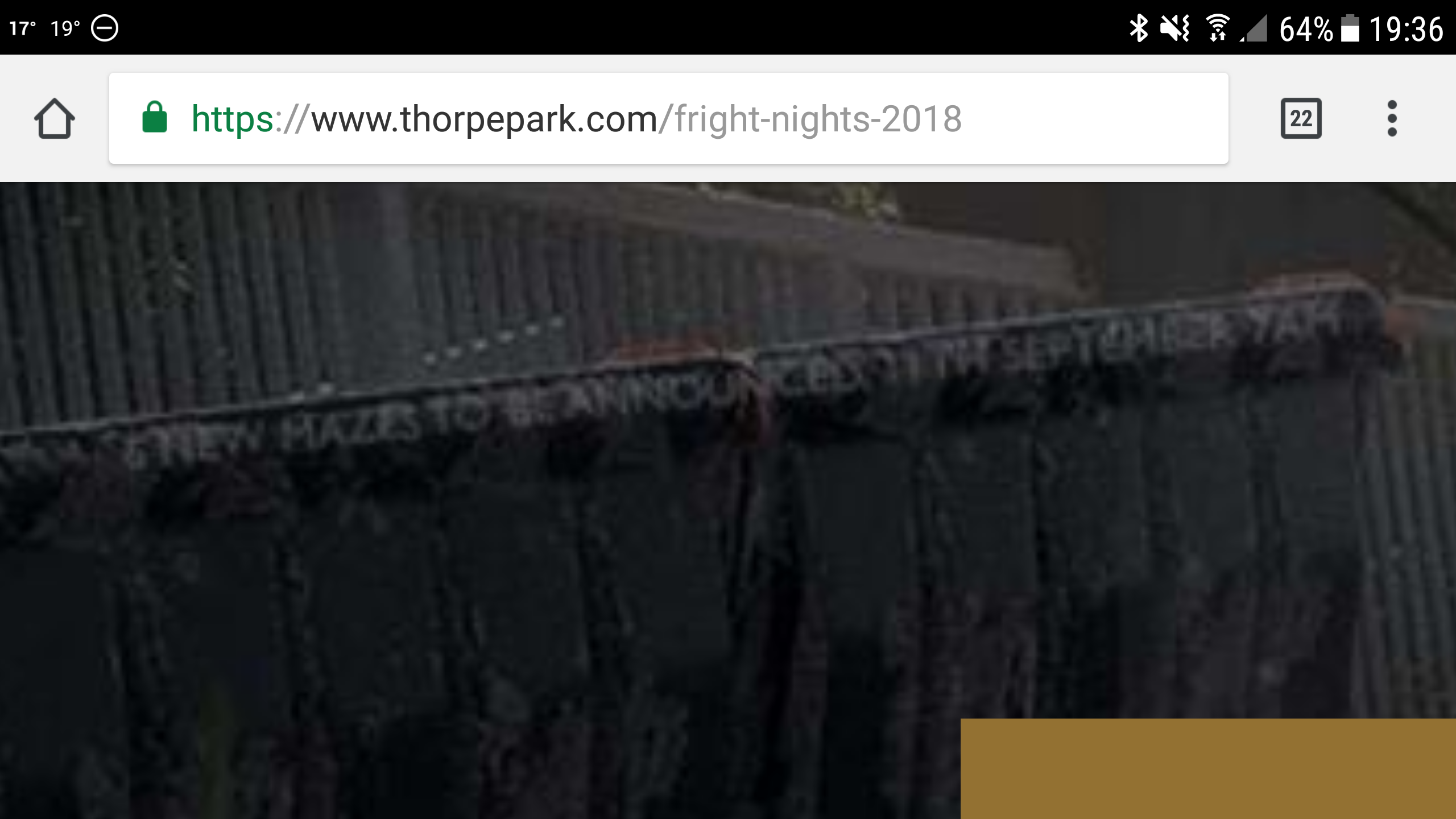 Credit to All Thorpe Park's Source.

nicky.borrill wrote:
Funny they spotted that and not the same message in clear text in the middle

Subtle difference in that the hidden message has the word new, and depending on how much you squint, possibly 6 as well.

Some more information on Fright Nights. Thorpe this morning had changed the Fright Nights page to list all scare attractions as opening from 3pm, but whilst writing this edit, they've now removed all of the attractions listings and just list a generic Fright Nights 10am-10pm. So be aware, that the first batch of Fright Nights days may have later attraction openings than originally stated.

Also here is the full background image from yesterday's Fright Nights page (note this has now been removed again it seems), which appears to have a few more hidden bits in the image. 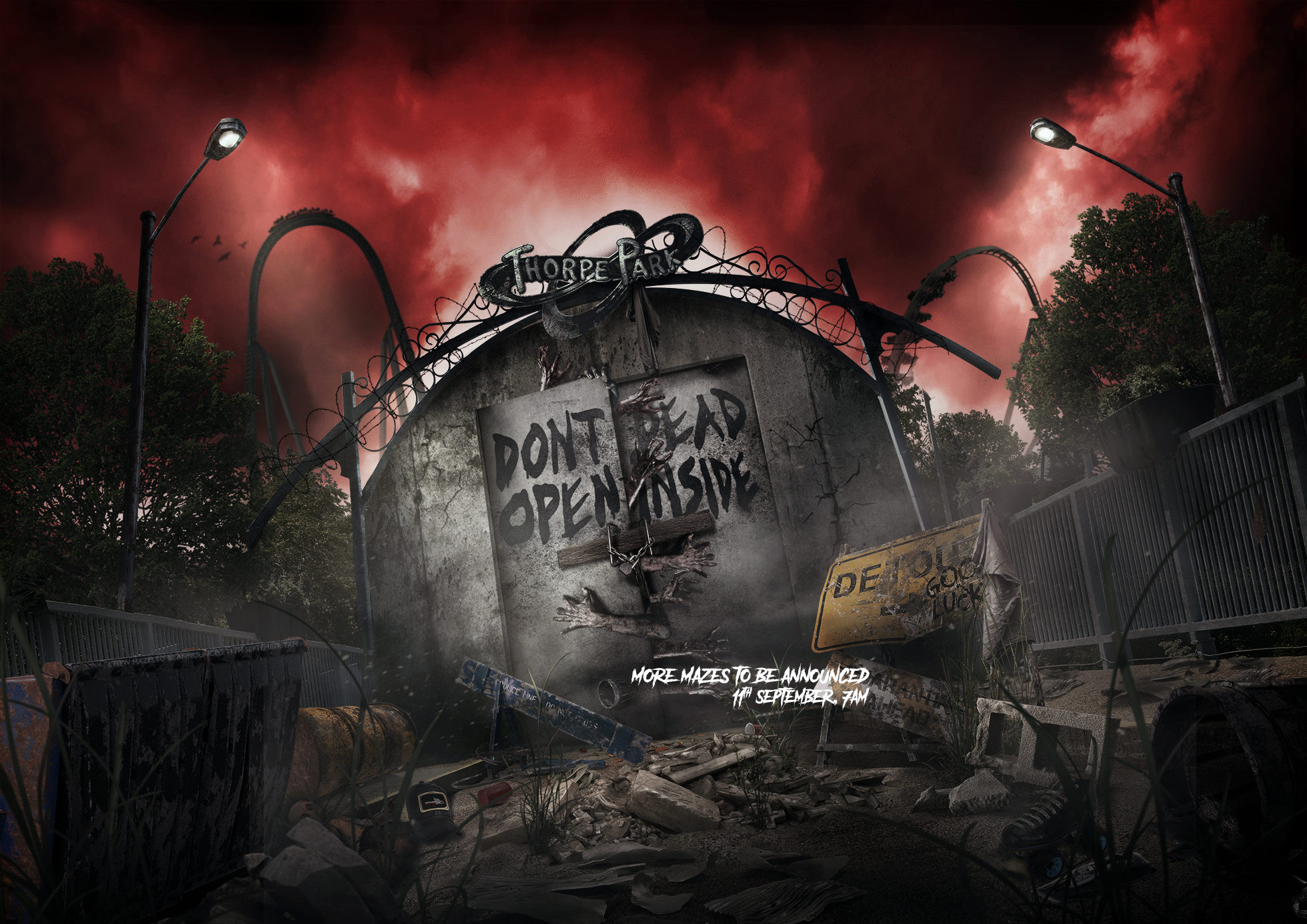 The doll at the bottom looks less like Billy from Saw than it originally did. Plus there is a baseball cap with what looks like a chainsaw on it, a red cup (not very interesting), along with the roller skate on the right hand side. My eye was also drawn to a cross in the middle, but that looks like it appeared on last years posters. It's also possible that it says 5 new mazes rather than 6.

What platform will thorpe announce more on Tuesday? Will it be their site?

Also I was flicking throught some videos and a guy called Jack Silkstone had shown behind Monks Walk a few days ago and part of what is expected to be the Blair Witch maze. There appears to be loads of trees that have been moved arround an outline of the walk, presume actors may be jumping out through "a forest", just something pretty cool I wanted to share, not sure if this is something that has been done in the past as this is my first yeat for Fright Nights.
I also find it crazy how it may seem with all this changing of promotional pics that there is little communication between maybe the marketing team and managment. I do however like the thought of Thorpe giving little teasers for these communities to build hype! I also hope all the tiny details that are on the poster are subbtle hints to what we can expect!
Top

I think what you have done is basically explain the premise of Blair Witch. It really was walking through the woods and the actors would pop out from behind the hedges/trees with the odd tent or other prop placed along the path, all culminating in the shed of smoke.

Here we go, this teaser was posted on Thorpe’s Facebook page yesterday evening.. comments have included speculation that the first scene is from The Big Top!
Top

So visiting the park yesterday I was on the hunt for FN stuff and saw not alot. I saw the Platform 15 tunnel had started being constructed and signs had been placed up advertising FN and that's all. The Blair Witch symbol was still hanging in the tree. Other than that, there was no signs of anything scary other than the queues.
Top

Theme Park Guide has posted an update from today with a gallery of pictures.

Key updates: Zombie Hunt has been dismantled; a new walkway into the area around Platform 15/Zombie Hunt/Blair Witch; fencing off of the walkway that used to contain part of The Big Top.
Top

Not sure if this is meant to be released yet
https://www.themeparks-uk.com/thorpe-park-guide/news/872-new-at-thorpe-park-fright-nights-in-2018
Top

Kenton80 wrote:
Not sure if this is meant to be released yet
https://www.themeparks-uk.com/thorpe-park-guide/news/872-new-at-thorpe-park-fright-nights-in-2018

Looks a lot like it was released before an embargo...

Edit: But apparently it was not

ThemeParks-UK have said that they received the info from the park this morning and that the embargo was until 9:30am today.
Last edited by Swarm Chris on Mon Sep 10, 2018 6:45 pm, edited 1 time in total.
Top

I have been a critical a lot of Thorpe recently but that looks really good!

As reported by SouthParks Facebook page; THORPE PARK Official have unveiled six new scare experiences for Fright Nights 2018, with the promise that ‘this year nowhere is safe’!

These include new mazes The Walking Dead: Do or Die and Vulcan Peak, as well as the return of Blair Witch. There will also be new scare zones, Terror at Amity High and Big Top Showtime, with the latter being a twist on previous scare maze, THE BIG TOP, and short indie horror films will be shown in Screamplexx 4D.

A nice surprise for the new non-IP attractions. From the poster and this, I wonder if we'll have some roller skating actors in the Terror at Amity High scare zone. Makes me wonder where they'll place the scare zones. I'm guessing Amity High will go in the large paved area outside KFC. No idea on Big Top Unleashed.

From what I understand we'll see a large number of changes the next time the park opens. With reports of cranes lifting containers into the old Big Top area and a fire engine being taken somewhere in the island.
Top 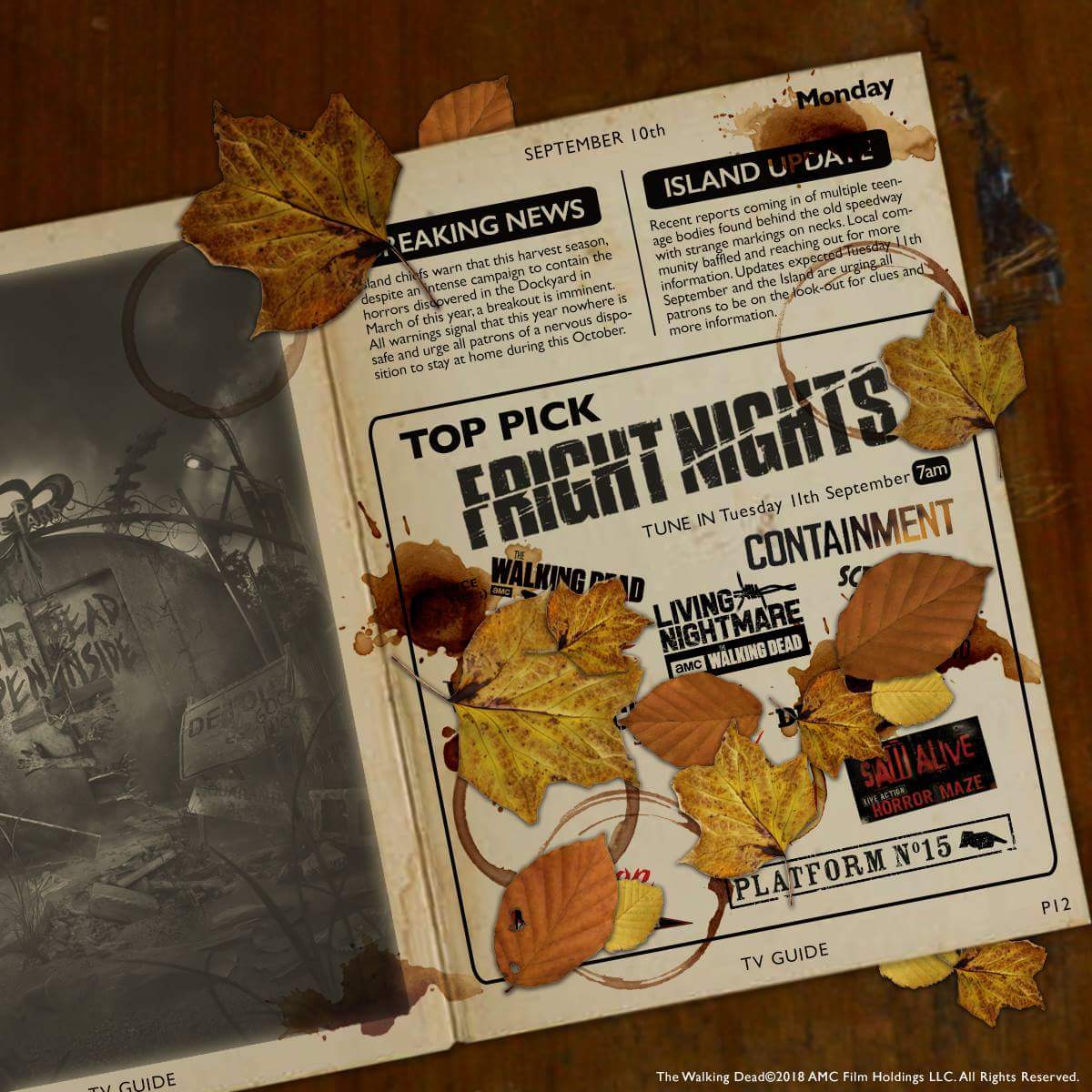 I got to admit, I'm so excited for this year's event, a lot of variety spread across the park so fingers crossed it translates well!

I guess we will find out tomorrow morning. I'm only speculating here. In that image that has got released, there appears to be a D showing. Given the information we know and the other features of the image, there is currently no reason why a D is there. Any ideas as The Waling Dead Do or Die is featured in that image in the left corner and that is the only thing which begins with the letter D.
Top

I'm incredibly curious about what Amity High is going to be exactly... I think it might be something like Scream or other 80s horror films about teenagers and slashers, but that concept is more scaremaze than scarezone. The vending machine thing is just strange... That is particularly weird. It seems like an annoying viral marketing scheme. That said, the rest of the new mazes look terrifyingly great! I'm incredibly excited to see what they're like and I'm very happy that scarezones are returning.

Edit: I've noticed something on the Thorpe Park Fright Nights page. If you click on Containment, it comes up as a 'recommended maze'. On paper, this looks like quite a good, balanced line-up, with a nice mix of IP attractions and in house concepts.

Vulcan Peak sounds the most interesting of the two new additions to me. At a guess, I'd say this is going to be in The Jungle area of the park given the use of the word 'Vulcan' which can refer either to the name of the Roman god of fire, or the fact that it is the latin root for 'Volcano', suggesting a possible link to Nemesis Inferno (somehow I doubt it has any relation to the Vulcans in Star Trek though - sorry sci fi fans

With The Walking Dead: Do or Die, it's going to be interesting to see which part of the TV show they choose to use. Given Living Nightmare already uses the Negan storyline, I wonder if they will do the maze as just a generic TWD theme, or use a story from an earlier season.

I love that Thorpe are introducing scare zones. Although Thorpe have had roaming actors in the past, these haven't quite worked as well as they could have done. Having two proper zones offers the potential of really building the atmosphere around the park - something which has been missing in previous years. Interestingly, the teaser image released tonight may offer a clue to the theme of Amity High with the words

To me, this suggests Amity High may have a bit of a vampire theme going on as that would be the most obvious conclusion for a horror based creature that leaves marks on its victims necks. The Big Top Showtime has the potential to cause the right kind of chaos in its zone - clowns set on the loose is pretty much a classic concept which will hopefully work well.

The only main concern I have is the return of Blair Witch. As others have said, this was always a weaker attraction, I'm not sure quite what they can do to add to it given the limitations of its location.

Hopefully we'll get a few more clues as to the exact story of each attraction in the next couple of weeks.

Ladyofthelake wrote:
To me, this suggests Amity High may have a bit of a vampire theme going on as that would be the most obvious conclusion for a horror based creature that leaves marks on its victims necks.

Didn't Universal Orlando do something very similar to this last year as a scare zone?

There's definitely been a lot of inspiration from Universal this year.
Top

The full announcement has been released now, although the teaser picture still seems to have a few hidden parts. All can be seen at the Fright Nights page.

Seems the Big Top will be in the Dome.

After the antics of The Big Top circus’ crazed clowns literally tore their colourful tent to the ground, it was time for the Figaro Bros. to find a new location for their travelling menagerie of torture and despair.

But fear not – the show must go on! This year, the bright lights of the Dome take on a more twisted and sinister glow as the hysterical cast of The Big Top continue their carnival of magic, mystery and mayhem, and the Figaro Bros. have only left the freakiest cast behind…IT’S SHOWTIME!

Whilst Vulcan Peak will be using a lot of hoods. I wonder if it will take place in the I'm a Celebrity building?

NEVER LET THEM SEE YOUR FACE...

New for 2018, Tourists are always looking for increasingly more daring and intense adventure holidays, and none offer a more intense thrill than the hiking trail to Vulcan Peak. But be warned, the tribal lords that guard these ancient lands have a nasty habit of possessing any souls that dare to enter their domain – just by taking a glimpse of your face.

Edit: Here is the updated teaser image. Whilst the hidden Walking Dead part must be Do or Die, there are a couple of other hidden ones. The biohazard symbol logo under the screamplexx doesn't appear to match up to any revealed maze. 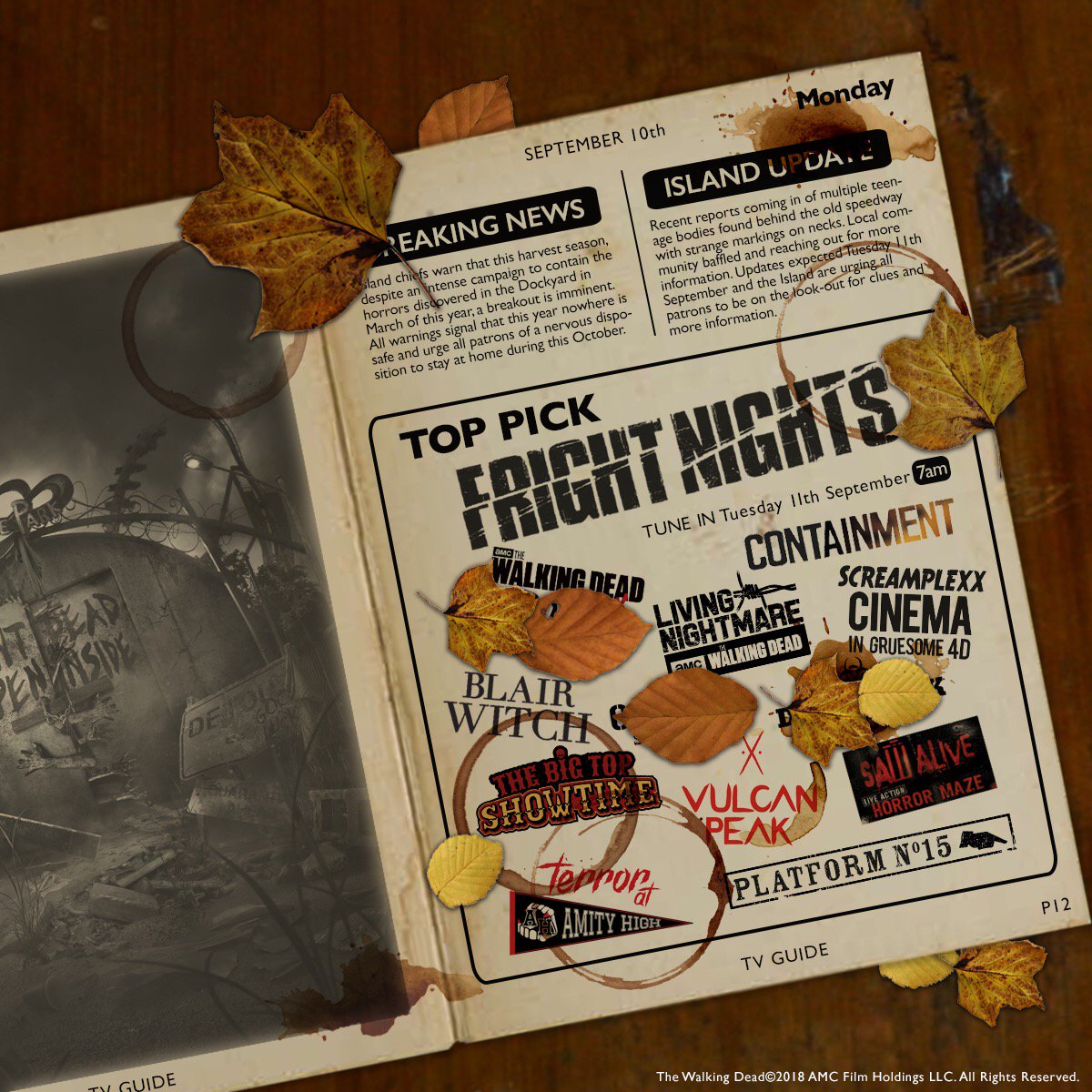 Looking at the line up, it is certainly different to anything seen before! It is exciting, but I am a little gutted that The Big Top has changed from a maze to scare zone. A year's break before its full return?

I do agree with you though, Chris. I also believe that Vulcan Peak will be utilising the IAC building. I also believe there are another two attractions to be announced. A little part of me hopes Studio 13 returns as it would be a perfect match!

Users browsing this forum: No registered users and 32 guests
×