Jcoaster wrote:
Do you have to pay separately for the mazes at Thorpe or are they included in your entrance ticket?

Included in the entrance ticket (except Containment which is purchased separately)

I would strongly recommend Fastrack on really busy days though

Ummmm...
Annual Pass preview......
Very busy all day, only an hours worth of actually dark maze time between 7-8 and spent the whole hour in the platform 15 queue, there was a whole other queue for the attractions that I didn't know about, hotel guests maybe? Waited until dark for Blair witch but missed by seconds because of platform 15.
Overall a good day but could of been open until 9pm for more stuff in the dark.

A few none annual pass holders confused as to why there children were crying because of fright night actors running at them when it wasn't a fright night.
Top

timmy1372 wrote:
Ummmm...
Annual Pass preview......
Very busy all day, only an hours worth of actually dark maze time between 7-8 and spent the whole hour in the platform 15 queue, there was a whole other queue for the attractions that I didn't know about, hotel guests maybe? Waited until dark for Blair witch but missed by seconds because of platform 15.
Overall a good day but could of been open until 9pm for more stuff in the dark.

A few none annual pass holders confused as to why there children were crying because of fright night actors running at them when it wasn't a fright night.

Was the other queue not for Dead Creek Woods? I believe that is just in front of Timber Tug.

Given it was the final Saturday of normal operations and the final weekend that resort and standard Merlin passes could be used without an additional fee, along with the many 2-for-1 offers expiring this weekend; closing the more child friendly area at 2pm unannounced and then filling it with screaming clowns, sounds like yet another great way for Thorpe to upset a group of customers. Whilst having this event adds to the "value for money" for a lot of pass holders, hopefully next time they organise it as a separate event like previous years, so family groups know what to expect when entering on a non-Fright Night day.

Edit: Seeing the photos, the actors went to all of the remaining family friendly areas during daylight hours, with them outside Flying Fish and throughout Angry Bird's Land, with kids in the background. Yet the park says Fright Nights is recommended for over 13 years only. Oh Thorpe..., guessing customer services will be busy.

Went to the preview night yesterday and wowza was it disappointing. Saw and Platform 15 were the clear highlights, with the actors giving it their all. Blair Witch has massively improved this year, with a little pre-maze scene and some cooler set pieces (like tents floating in the trees etc.). It was my first time through Living Nightmare and I gotta say I was disappointed. Our group went the wrong way about 3 times, actors were barely making noise and it all sort of just fizzled out until we realised it was over. I'm assuming it was just a bad runthrough because I've heard great things, but still a shame. Dead Creek Woods was singlehandedly the worst maze experience of my life. The entire thing was just a poor rehash of Zombie Hunt (which was to be expected I suppose), with weird audio (I swear I heard the Air area music?!) and random sound bites with no context from what sounded like an old film. The fact that they had a giant poster with zombies on instead of trying to actually populate the maze says a lot to be honest. Once again, I get it's a preview night and kinks are still being ironed out, but Thorpe have got a lot of improving to do before press night!

EDIT: Massive well done to Nick Hutson by the way, who I think did the audio on park this year? It was on point and our group agreed one of the strong points of the evening.

Since Fright Nights opens to the public this Friday, it's safe to say hype towards it is building. But there is still 1 more attraction to be announced. After doing some digging and comparing the 2 initial teasers for FN with the leafs, I may have an idea of at least what the title might begin with. 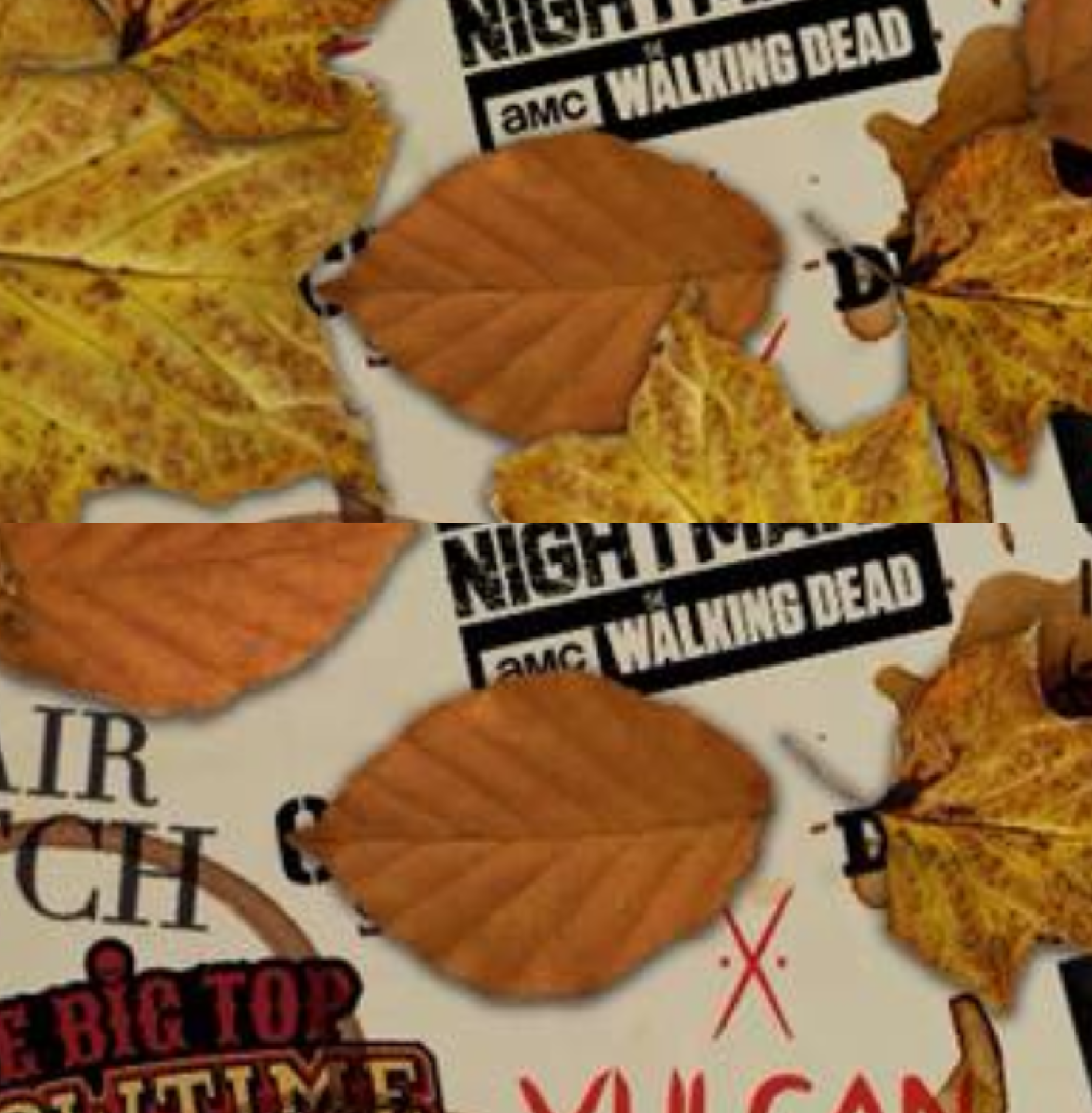 The top image is the first initial teaser and the lower one the same teaser but with the newer attractions uncovered. Comparing the 2, nothing is really given away but if you look closely, the leaf is moved ever so slightly. It reveal to me the title begins with what i believe is an "C" and the next letter a straight line letter so something like an "I" or what i believe to be a "L". As well as this, there seems to be a separate title underneath this main word which begins with an "S". So like how we have The Walking Dead, some mazes have the additional word/title at the end (ie: Sanctum, Do Or Die, The Ride & Living Nightmare)

In my opinion, i think this "attraction" will be called "Clowns". This referring to the roaming clown actors they had on annual passholders preview night on the 29th September.

This is just an idea/ theory but just some little info if people were interested.

A possible alternative theory may be that we'll see a scare zone on Swarm Island. Thorpe have been promising that 'this year no where is safe', yet, as things stand, Swarm Island is free of any Fright Nights attractions, making it a bit of a safe zone with the current confirmed line up.

The font of the concealed letter looks to be very much a military style stencil, a style of writing that can be found on some of the theming around The Swarm. Could Thorpe have on last surprise with some form of attraction based on Swarm Island?

Or you could pay £400 for the fast track "season pass", which gives fast track access to none of the mazes and expires at the end of October.

So in the video that was released of some of the new audio from the Tim Tracker, when the camera pans over to the right, it sure looks like some work has been done on Amity Beach.

A screen capture, including what looks to be bushes used to screen off the beach, plus what looks like an entrance to something on the right hand side, with text? 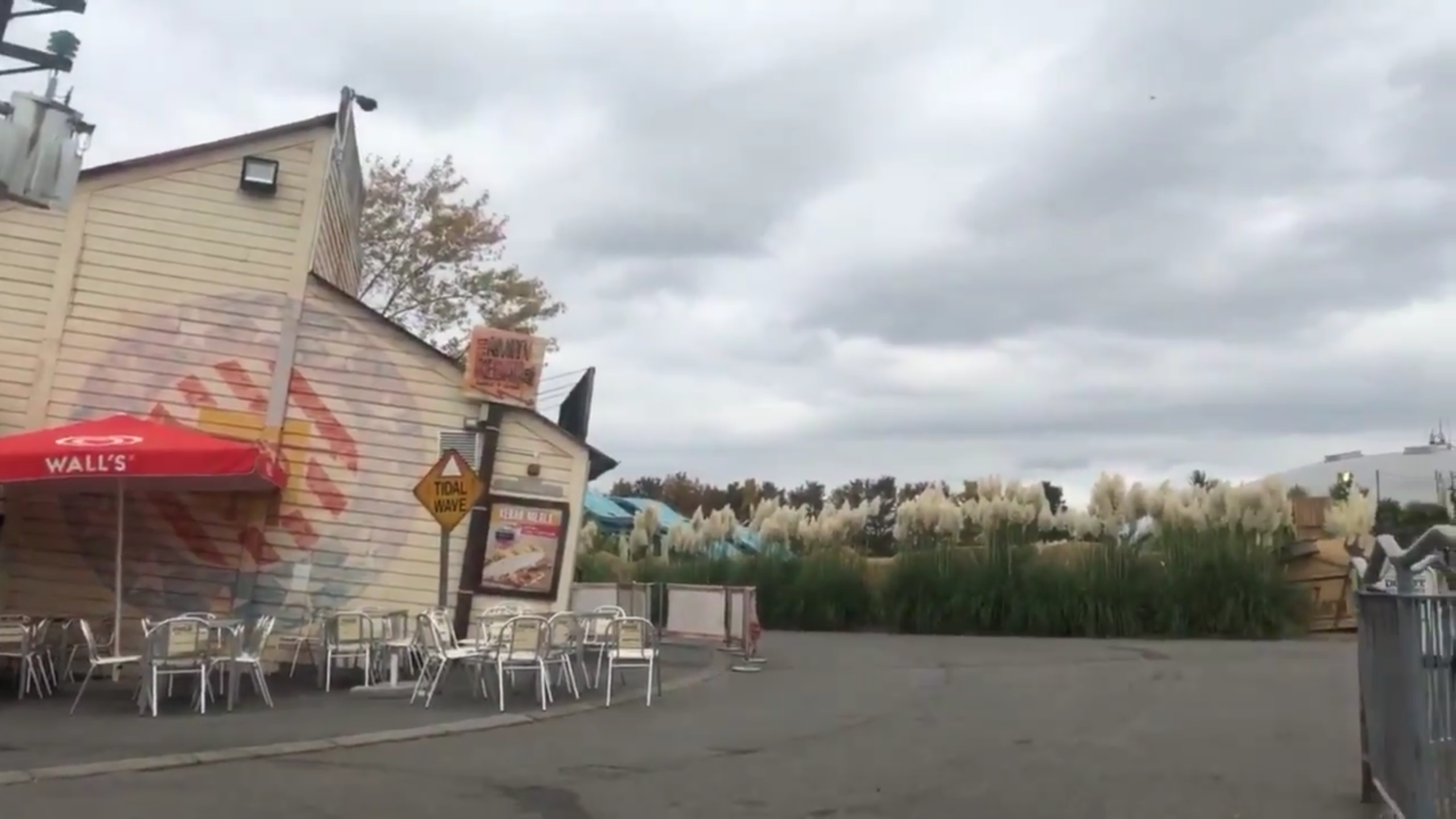 The location of the final attraction? Or the crazed ramblings of an enthusiast? Find out tomorrow!

Doubley posting, but here is confirmation of another limited run attraction:

You’re invited to the Fanta Twisted Carnival, a travelling Halloween show of thrills and chills
Strictly for over 16s only…and not for the faint-hearted.

I'm not convinced this is the one that was listed on the Thorpe teaser image. But could this possibly be going into Amity Beach? There are certainly few places left they can put things...
Top

We also have apparent confirmation of The Walking Dead: The Ride offering an enhanced experience during Fright Nights:

So Thorpe have revealed their final attraction...

Looks like the image under all the leaves got swapped out at some point.

Also, Coca-Cola are saying that the Fanta Carnival is only there for the first two weekends.
Top

It has definitely been altered which I'm annoyed about.

SouthParks is at tonight's preview event - keep an eye on Facebook, Twitter and Instagram for all the latest updates, with the first being a look at the Terror at Amity High characters...

Take a look at the SouthParks Facebook page for several photos from The Walking Dead: Do or Die and Blair Witch!

Its looking good. Biggest hope now is that the number of actors don't drop too heavily once it opens to the public!
Top

With so many attractions to cover, the updates are coming in thick and fast with photos from SAW Alive and Dead Creek Woods now on SouthParks Facebook (there are also some additional photos on TTSP Instagram).

Users browsing this forum: No registered users and 70 guests