It's quite possible it will be going into the Old Town area. Here's a photo from the benches outside Zombie Hunt today. 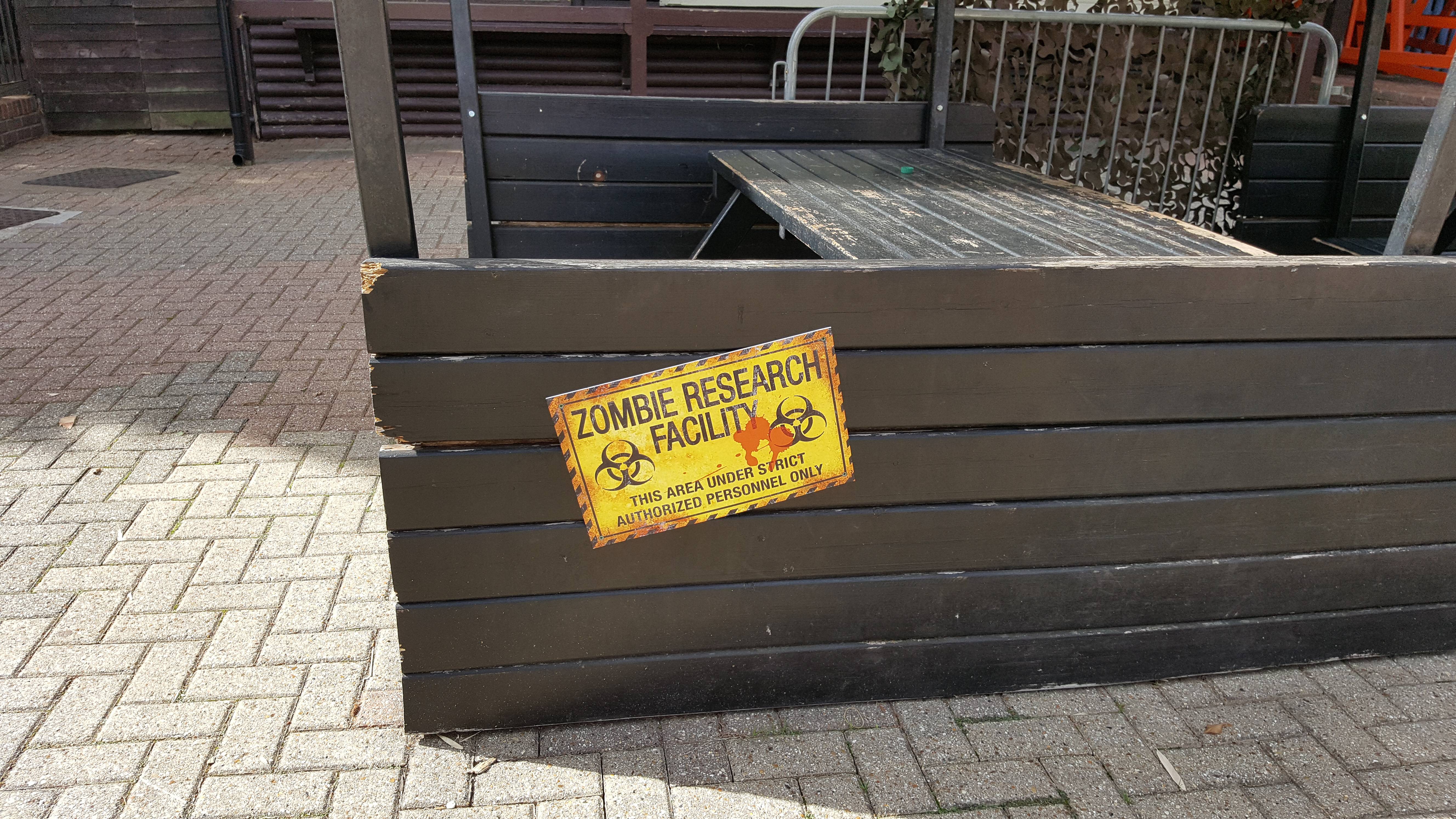 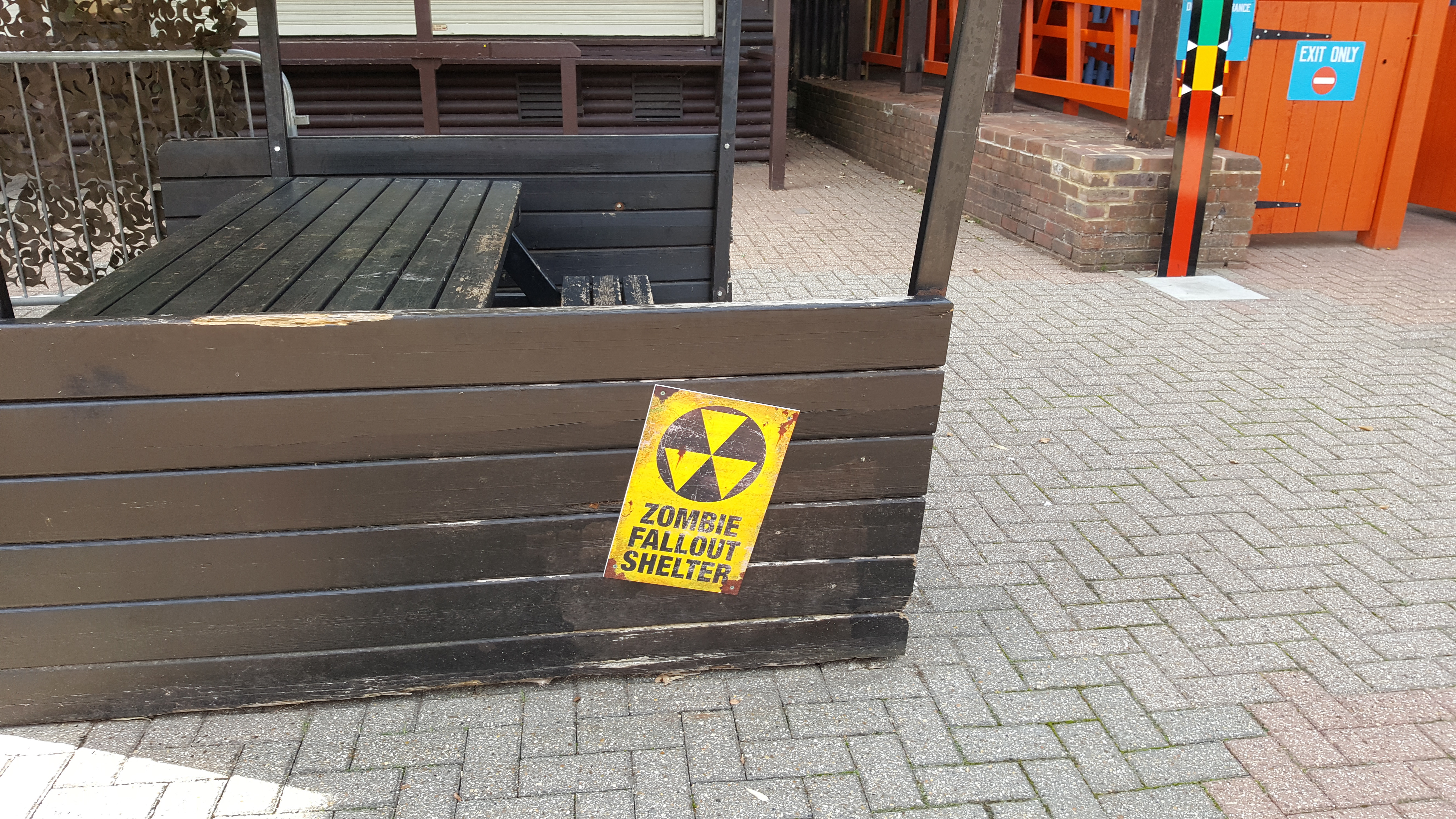 Interestingly, the Zombie Hunt banner and gun collection point banners still remain. All other theming has been removed.

Edit: The large wooden Zombie Hunt sign on the old train track still remains, with the entrance this way part tucked behind it. But they've removed the big football darts game from further round in Old Town and moved it to Angry Bird's land.

As reported by SouthParks Facebook, With under three weeks to go, construction for Fright Nights is now well underway at Thorpe Park Resort.

Shipping containers and a yellow school bus have been placed on the concrete area by Crust, indicating this will be the home of The Walking Dead: Do or Die.

The I'm a Celebrity: Get Me Out of Here building is having new rockwork added, along with tribal props, confirming that new maze, Vulcan Peak, will be utilising the building for Fright Nights.

Elsewhere, the tunnel for Platform 15's finale is under construction, whilst the shed section of Blair Witch looks to have received a new front and small extension. 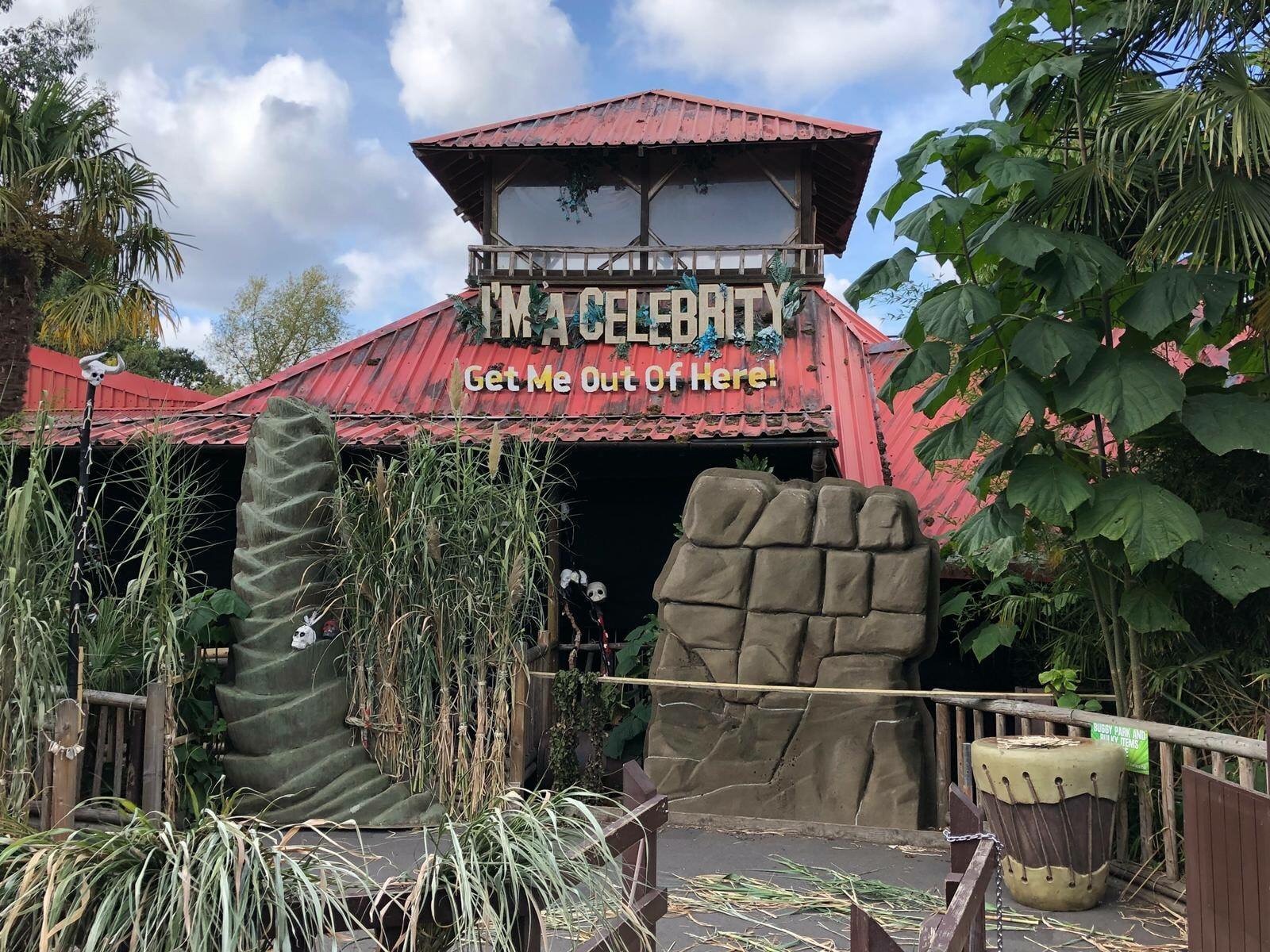 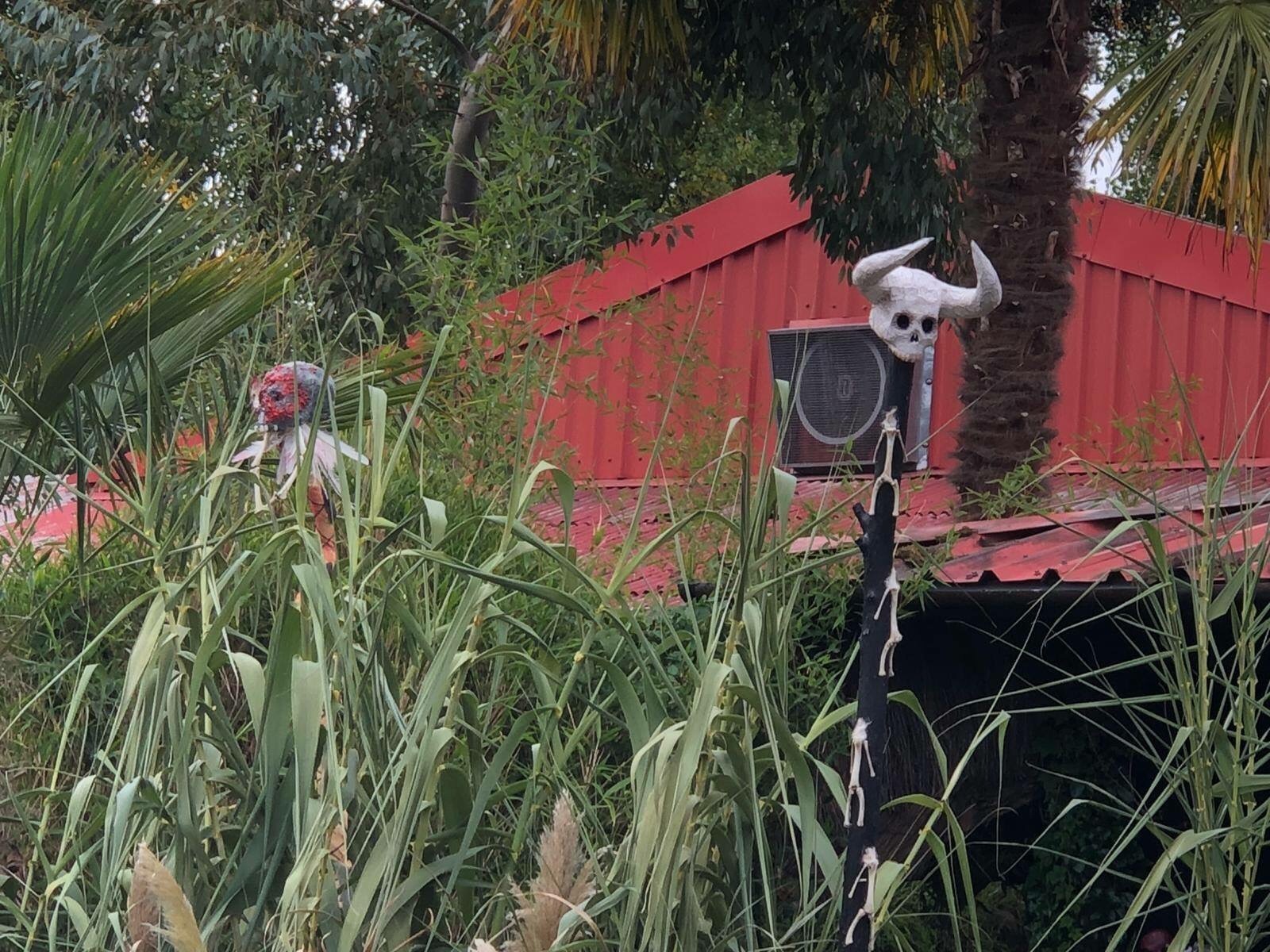 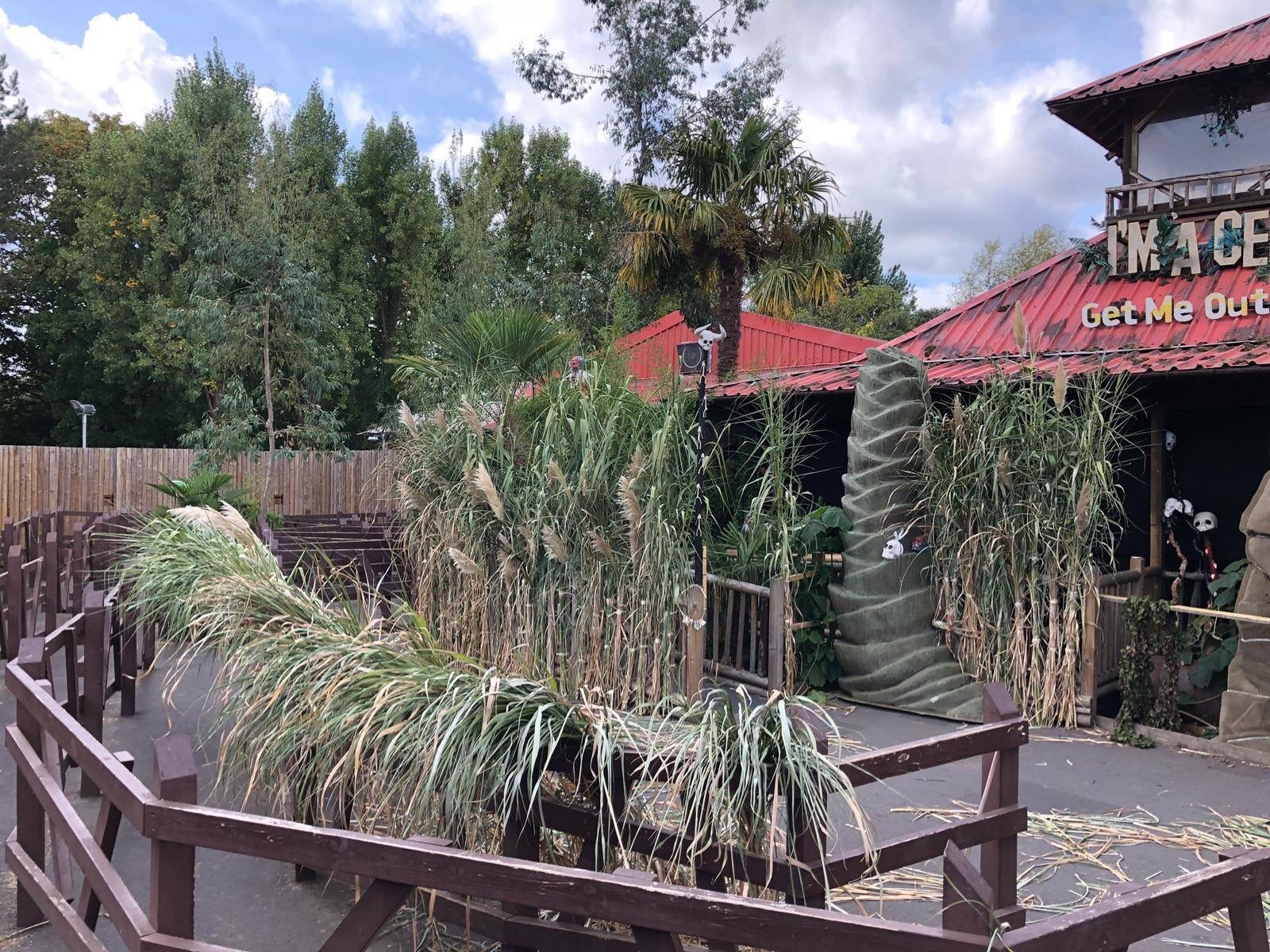 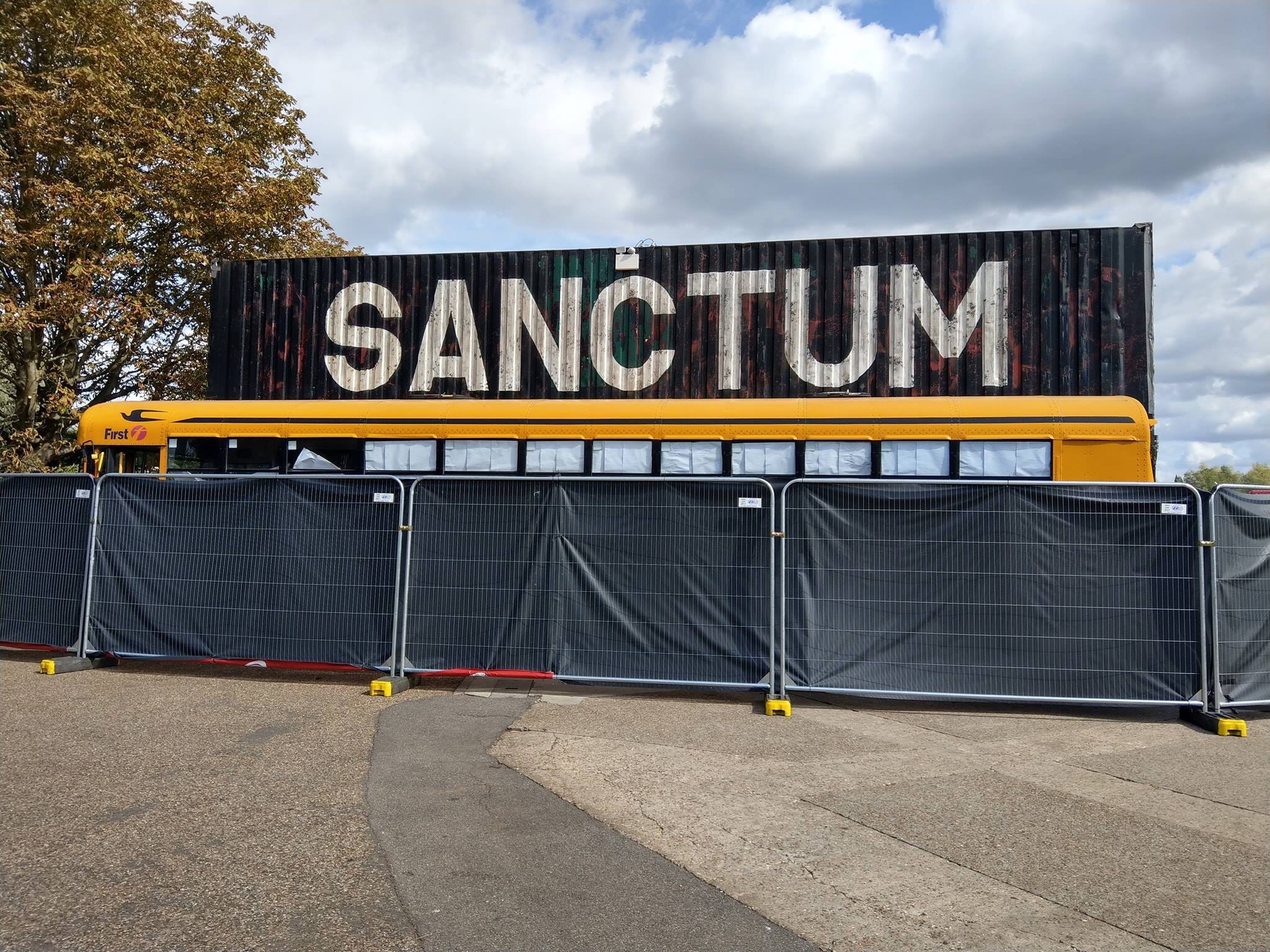 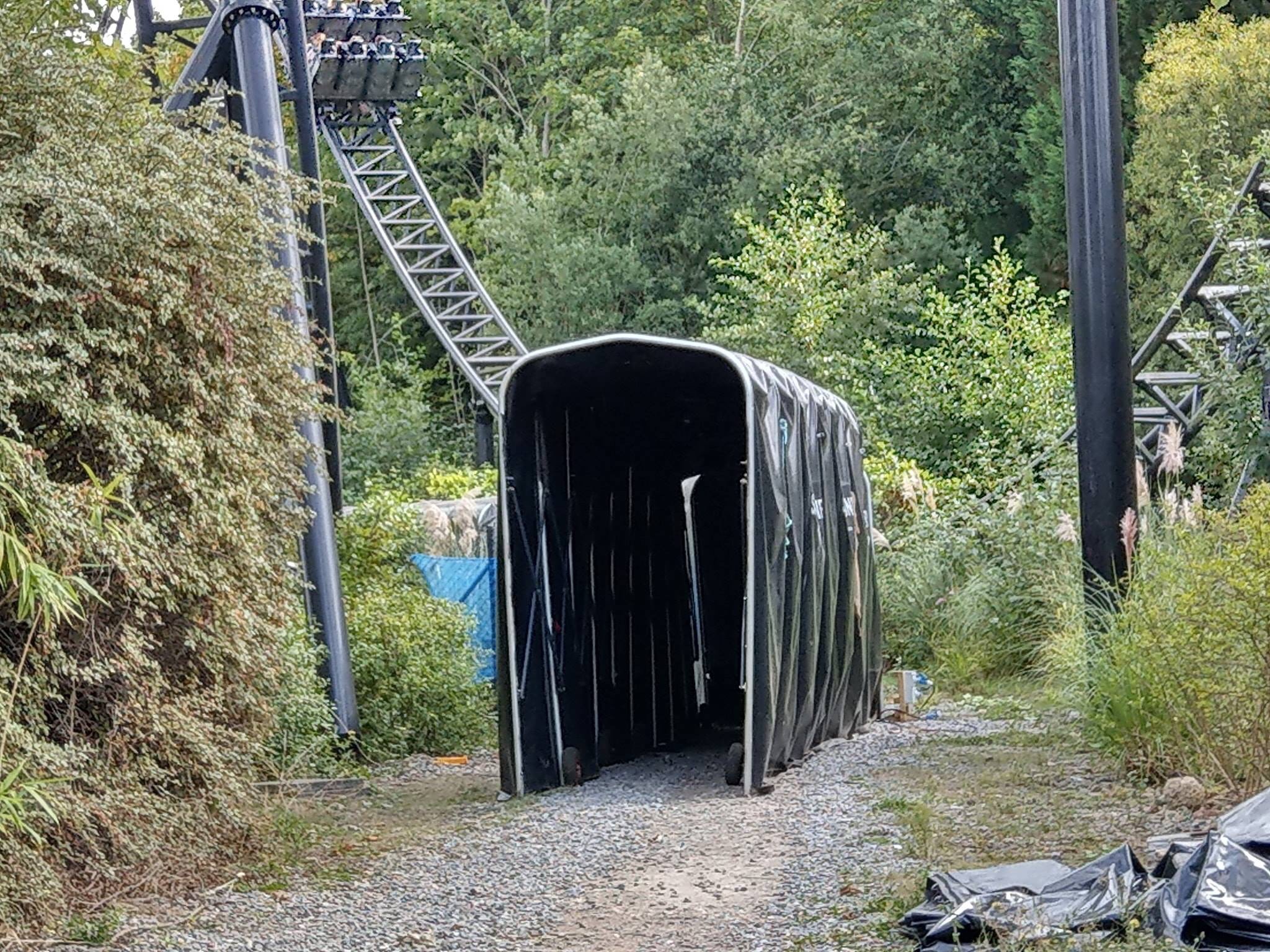 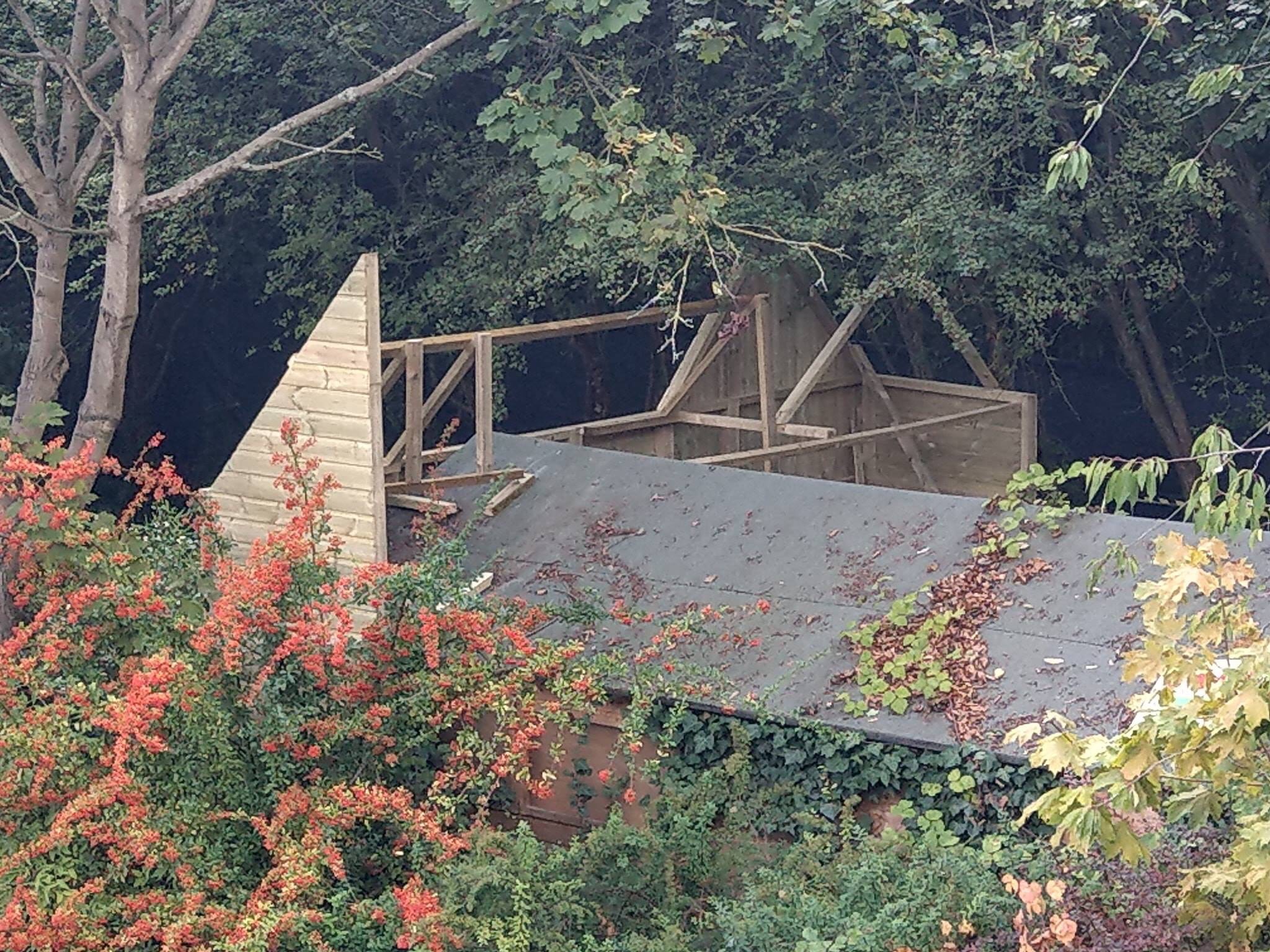 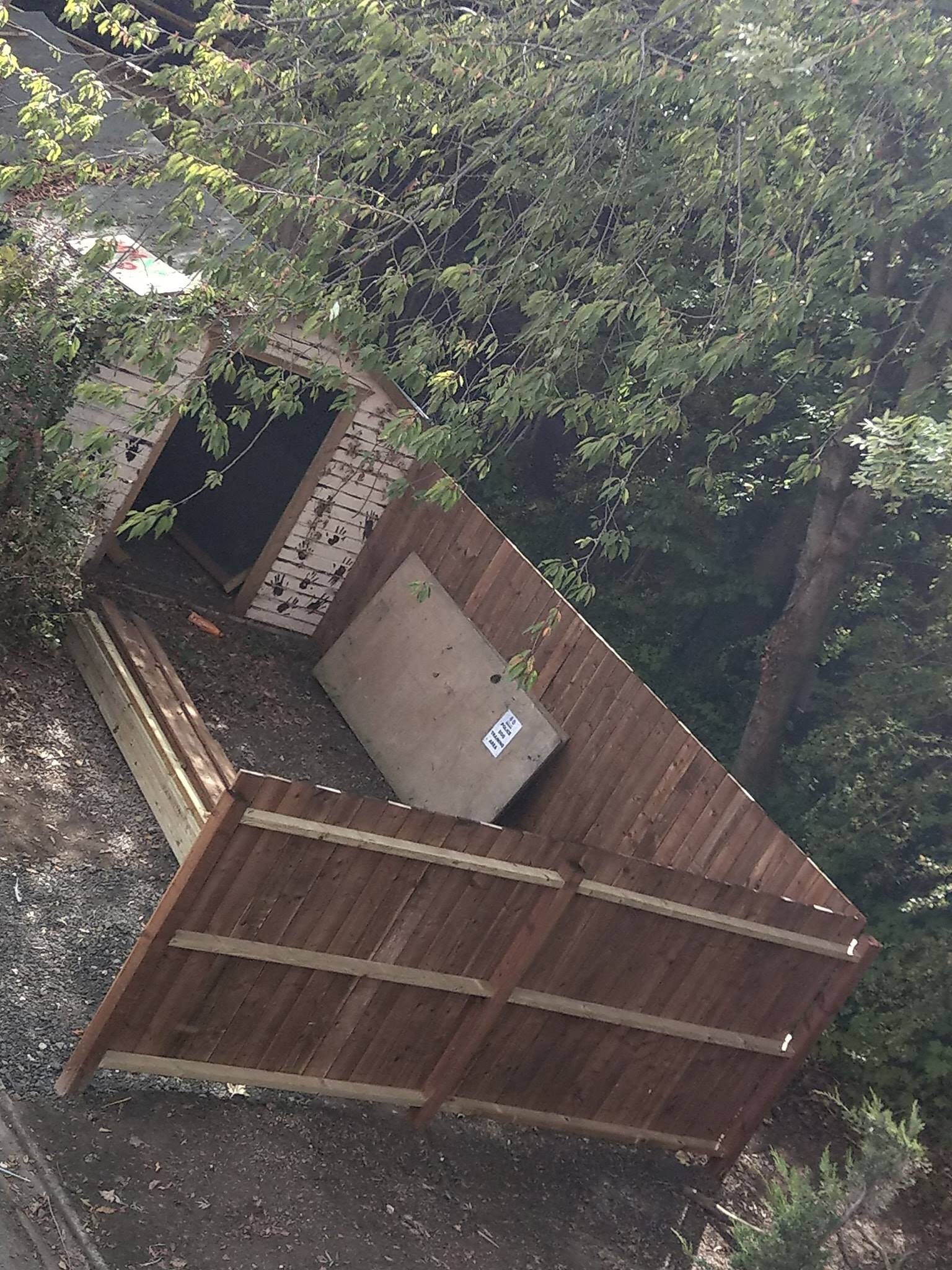 Piggins wrote:
So reports from another forum state that the far right maze that is covered by leaves is actaully "Deadwood Creek" as someone who works there has over heard some of the actors discussing this and their job role. Presume this would be more of a scare zone than maze as the term "nowhere is safe" would then be more appropriate.

Deadwood Creek sounds better... who knows?
Both fit into the logo, depending on how it is stylised. 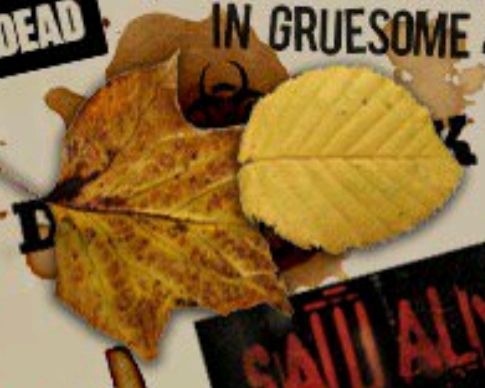 Thorpe Park has announced that the Fright Night preview event for Merlin and Thorpe Park annual pass holders will be on Saturday 29th September.

No pre-booking will be necessary, however only a selection of the attractions will be open for passholders on the evening.

Exact timings for the event and operating hours are still to be announced.

'Fear Ratings' have also been revealed...

THE WALKING DEAD: Do or Die
Night:

Justin, you've got the days and nights mixed around for Platform and Do or die
Top

Ismail wrote:
Justin, you've got the days and nights mixed around for Platform and Do or die

I'm sure there are many jokes that could be made about the daytime one being scarier, because you can see how it's all been constructed!

Ismail wrote:
Justin, you've got the days and nights mixed around for Platform and Do or die

Thank you. All corrected... and hooray, the pumpkins displayed correctly too!

That's an interesting comparison between the mazes. I wouldn't think that Saw Alive would be their scariest maze, but I guess it's had the most experience so maybe. Terror at Amity High makes sense along with Big Top being rather low in comparison. I'm very excited to see Walking Dead: Do or Die. I wonder how it will be different to the other two Walking Dead scaremazes they've done.
Top

Speaking of Walking Dead, there’s no Living Nightmare on there

It seems those leaves are covering two more new attractions, which are still to be announced. From Thorpe Park Breaks:

With EIGHT brand new live–action mazes and experiences, plus the return of FOUR favourites, including Living Nightmare and Platform 15 — this year no where is safe...

Hotel guests also get Fast Track access to the mazes for the first hour of Fright Nights each day, and free access to Containment (which this confirms will be a paid for experience again). The following conditions also suggest Blair Witch may not open until later in the evening?

**Maze Fastracks are valid from 3pm–4pm for THORPE SHARK Hotel guests on the following rides; Saw Alive, Walking Deading Living Nightmare, Walking Dead Do or Die, Vulcan Peak and Platform 15. All mazes are subject to availability

***Only available for guests staying in the THORPE SHARK Hotel. These guests need to contact hotel reception to book a timeslot between 12pm and 3pm. Guests staying in a nearby hotel will need to pay for entry to Containment which can be booked with the Theme Park directly.

And as if by magic, introducing Dead Creek Woods.

The previously pleasant surroundings of Dead Creek Woods have taken an apocalyptic turn in 2018.

Once a popular tourist spot famed for its stunning natural beauty, these decaying woods are now infamous for an entirely different reason. The poor souls who didn’t evacuate in time before the virus took hold are now condemned to remain in their squalid quarantine forever, and it’s up to you to navigate this formerly thriving scenic town and make it out the other side without becoming infected and doomed yourself!

No pre-booking will be necessary, however only a selection of the attractions will be open for passholders on the evening.

Exact timings for the event and operating hours are still to be announced.

There are now some more details for the Annual Pass preview event here.

We will have a selection of scares and fears available for you from 3pm to 8pm. This will include SAW Alive, Living Nightmare, Platform 15, Blair Witch, Vulcan Peak plus we might have another scary surprise for you…

VIP Merlin Annual Passholders will also have access to Containment.

Am I the only one slightly worried about the sheer amount Thorpe are trying to do this year? I mean, if they pull it off than its going to be spectacular, but If they struggle with actors or sets, than it could be disappointing. Fright Nights has always been one of the better theme park Halloween events, so it will be quite gutting if they screw it up because they reached to high too soon.

That being said, the work that has been done looks really good, so I have some hopes. I just have a few reservations which I hope are proved wrong!
Top

I understand your concerns. To be honest, while it looks good on paper, thinking about it, we only have Living Nightmare, Saw Alive and Vulcan Peak as proper mazes, then again Vulcan Peak doesn't sound great as the rumour is that you are hooded all the way through and see nothing. The rest are outdoors, so that very much depends on the weather. I do think the loss of Big Top is a big blow too!

On face value, it sounds amazing, but in reality?

I suppose it would help with queue times, with the amount of attractions that need a queue. Plus the scare zones should take in quite a few people, depending on the extent. If Thorpe Park limit their capacity to a reasonable number, as well as the amount of fastracks available, then queue times should be fine. And if the attractions are done well, then we should be in for a good one!
Top

Hopefully, but as Dom says, they need really good actors and sets to make it worthwhile

Do you have to pay separately for the mazes at Thorpe or are they included in your entrance ticket?
Top
Post Reply

Users browsing this forum: No registered users and 29 guests