At this stage, I feel that anything will be good for the park. It has been under invested for a while now and could do with something new. I get that Derren Brown wasn't all it was hyped up to be, but at least the park tried something. We would be sitting here complaining saying that they dont try anything new if they didn't put in the ghost train when they did. As a company, if you try something and it doesnt quite hit the mark, you cant just think "well that cost a lot so lets not bother", need to learn from the problems/mistakes going forward not just stop all investment.

Dont get me wrong, I personally dont mind the ghost train, but it can get a lot of bad press for being a waste of money - but you wouldn't of known the outcome without trying - which is my point.
Top

The Ghost Train investment was realistically always going to be high risk. It was being developed when consumer VR was in its infancy, and they've essentially just used consumer grade technology in a high stress industrial environment. It would be incredibly disappointing if Merlin have got cold feet over spending anymore money on Thorpe because of Ghost Train, given they would have known the risks involved with the project from the very start.

It's hard for me to see what Merlin are waiting for, in terms of investment into Thorpe Park. From when they were public, the accounts showed they were vastly profitable as a company overall, and were happily building more and more things in untested markets, such as China. So money clearly isn't an issue.

My guess is park attendance increased in 2019, which given next-to-no investment is a remarkable feat. Although, perhaps reducing ticket prices to possibly an unsustainable level had a big part to play there. But it indicates there is a healthy market there, which given the park's proximity to London and one of the world's largest international airports, shouldn't come as much of a surprise.

Without some form of investment, even to ensure the park remains in pristine condition, stagnation will be joined by disrepair. Any hard work Thorpe have done to improve guest numbers and satisfaction will steadily be drained away by Merlin's unwillingness to spend money, making obtaining a healthy, self-sustainable and highly profitable theme park, ever more difficult.
Top

They just posted something on their Instagram saying “We value your privacy. #ThOrpEparK” With a picture of a family with their faces blurred out standing in front of Stealth.

A few minutes later it was then deleted! Unfortunately can’t post a screenshot for some reason but you can find it on twitter if you search “thorpe Park” and look at the recent tweets!

I wonder if this is a teaser for something to come? Or simply just a mistake post which doesn’t actually mean anything?

Seems too detailed for me to think it was a meaningless mistake!
Top 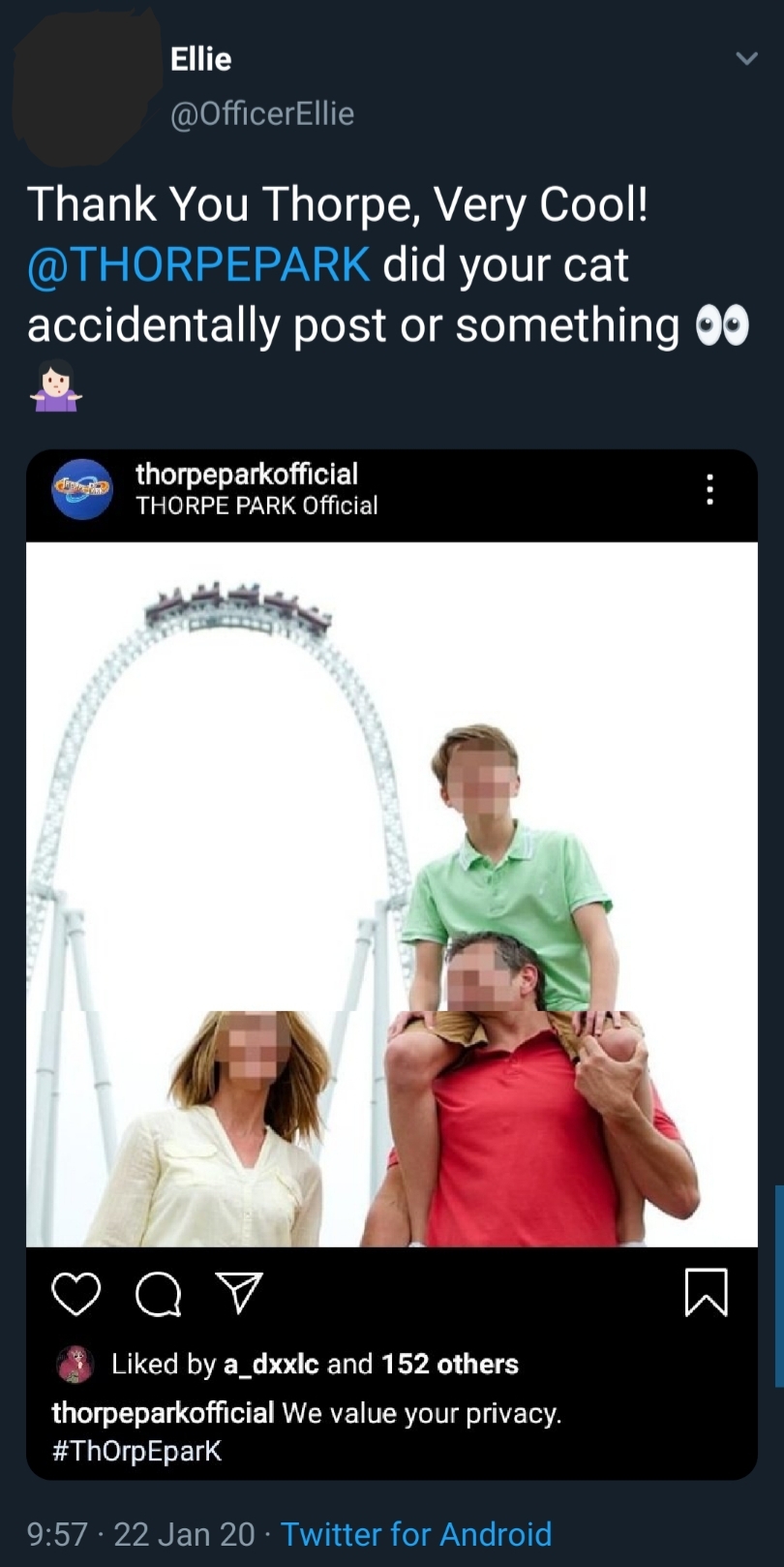 I saw this too! Unfortunately knowing Thorpe this is just their erratic social team posting again.

Just like the "I'm going to tell my kids this was Wicker Man" meme they tagged Alton Towers in a couple months back.
Top

https://www.instagram.com/p/B7tp8PcB6Pu ... t9rknlsfxd
I'm sure some have already seen this, but AromaPrime Themed Scents have said that they are announcing something with Thorpe Park Resort. What could it be?
Top

Here is that little teaser as posted by Coaster Chall. 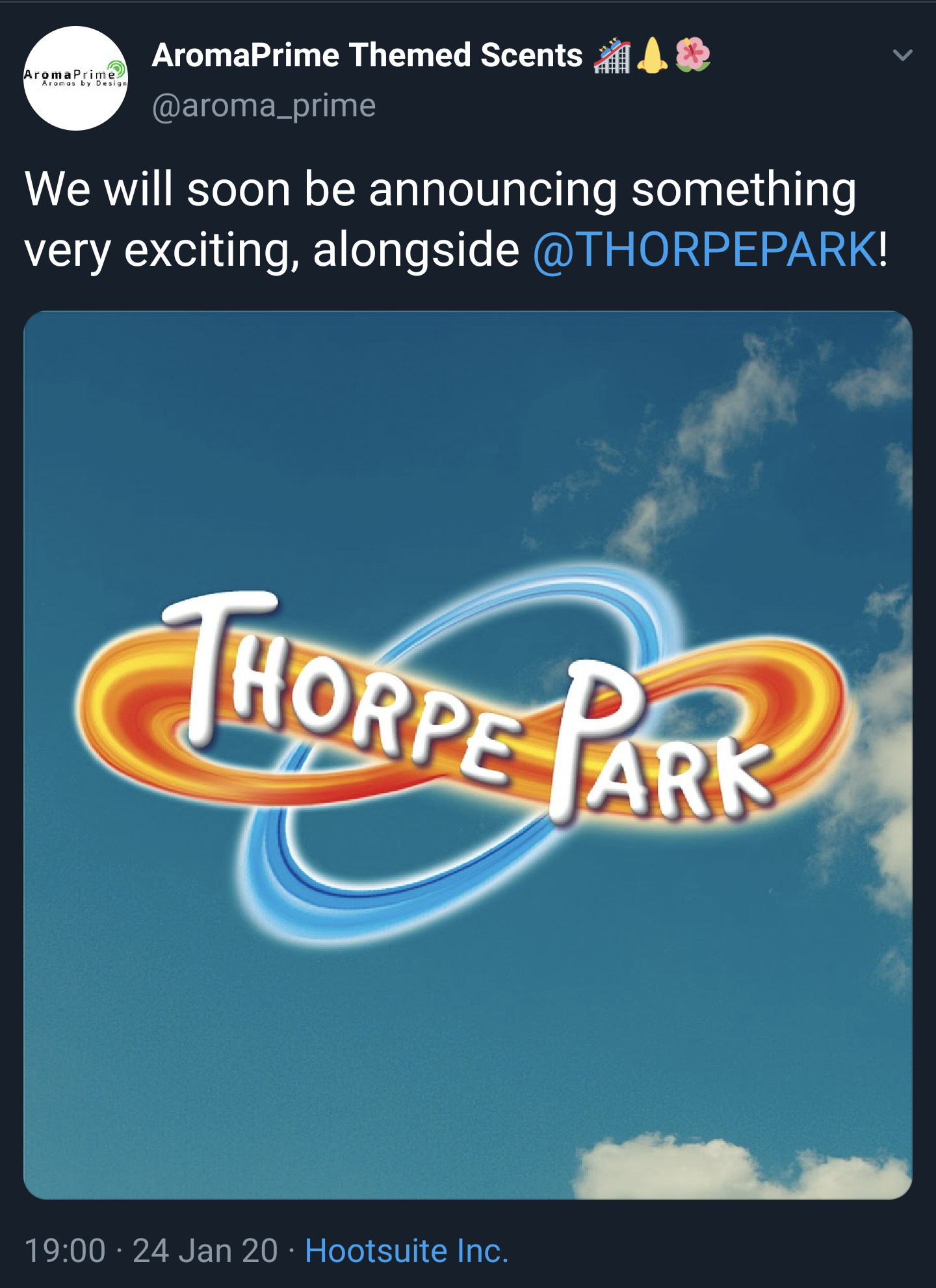 I'd imagine this would be something along the lines of scents used in some of Thorpe Park's attractions, especially if these are smells that were specifically designed Thorpe Park. It should be an interesting announcement!

Aren’t most of the smells like decay and flesh, like in The Walking Dead? I can’t see this being a nice candle or deodoriser to have at home!
Top

So this is currently listed on the Aroma Prime website. No idea when that appeared, but hopefully this isn't the announcement, because it's still January. 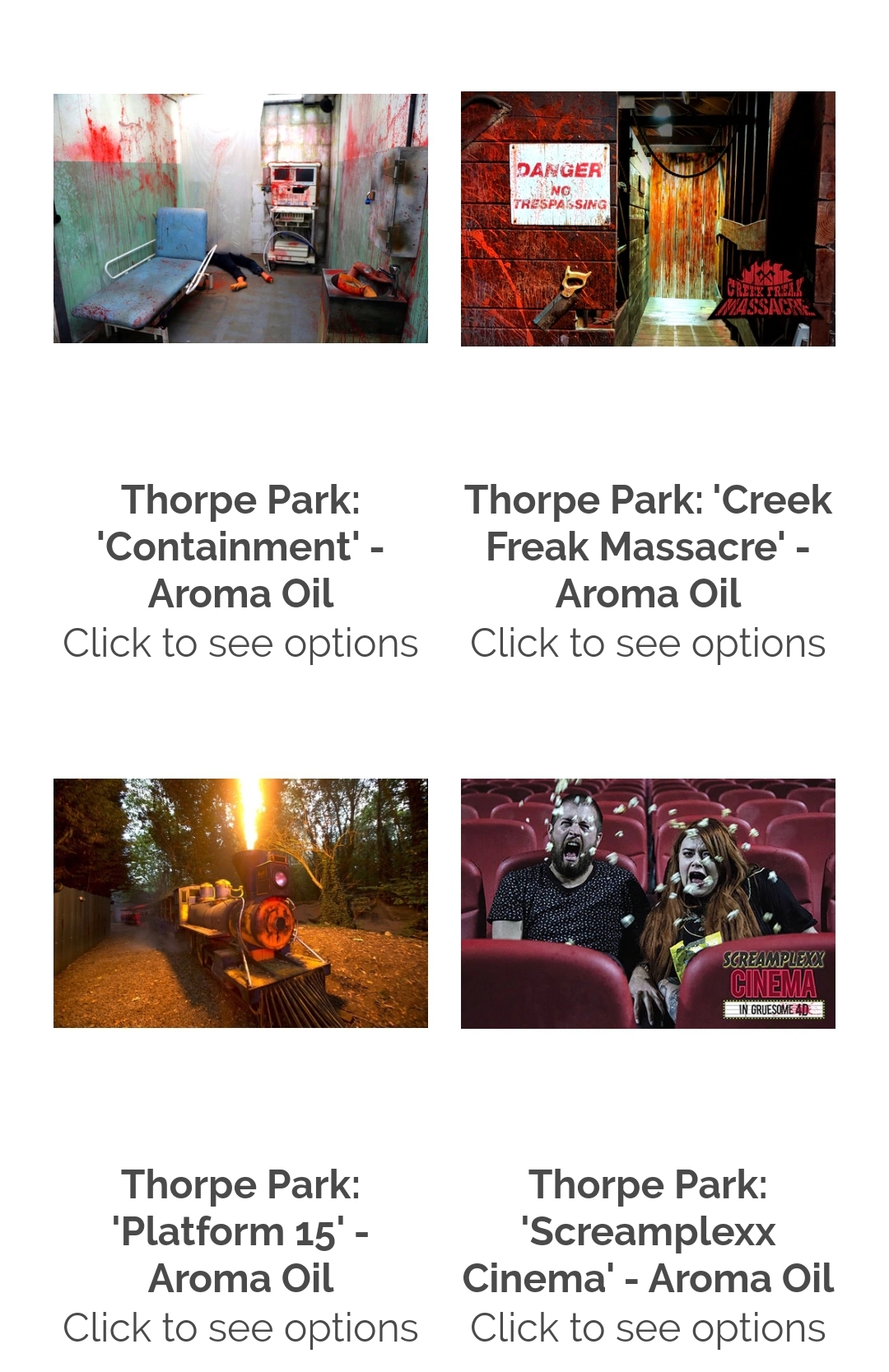 What I've always wanted, my house to smell like.. "distinctive stench of blood, rusty metal and raw flesh!"
Top

Yeah, we will definitely replace our Yankee Candle's with them.

All the above mentioned products have now been removed from the Aroma Prime store.

This is going to be the announcement, isn't it?

Thorpe park is in a dire dire situation. They better start pulling their finger out otherwise they'll have no chance come 2024-- The year that the London Resort (The collab between Paramount Pictures, BBC, and ITV) is set to open. I hope it should add some much needed competition to the themepark game as all the biggest parks in the UK are owned by Merlin, so seem to have been pretty safe all this time
Top

Thorpe have recently been posting adverts for jobs this season at the park. Largely the positions available have been for the sorts of seasonal things you'd expect: rides; food and beverage; and site presentation. However, here are few interesting new positions available. These include: Marketing Director (which I believe has been advertised a few times over the past year or so and presumably not filled); Digital Brand Manager who will be responsible for website, e-commerce and social media; and finally life guards who will operate Amity Beach this year instead of attractions staff.

Currently there are no actor positions advertised. I'm hoping that we aren't going to see a backwards step from last year on that front.
Top

I wonder if a new marketing director will help promote the park in a new direction? Also, hopefully there's no backwards step on actors, like you said
Top

As posted on SouthParks Facebook, Thorpe Park will be operating a new parking system from the start of the season. Designed to speed up the process of leaving the Resort, the new exit system will use ANPR, which guests pay for via an app or pre-payment online. Premium Passholders will still be able to access the car park as normal, with pay on exit also available.

It is expected that if successful at Thorpe Park, the parking system will be rolled out to other Merlin Entertainments properties.

Have to say I'm a little surprised an adjustment to the car park is actually happening. We've been promised something for about the last two seasons and yet to see anything other than a price increase on tickets bought at the barrier. If annual passes are linked to the ANPR, that could dramatically increase throughput on exit.
Top

If this new system works, what a welcome change. I've never witnessed chaos like exiting Thorpe's car park anywhere other than the multi story car parks attached to Manchester & Liverpool arena's after a large concert, I just can't comprehend how they've allowed it to be as poor as it has been for as long as it has.
So yay, I look forward to this!

So they have posted two post on their Instagram with a tv losing signal sorta filter. Then used the #ThOrpEpaRk in both of them.

Identical to the post they made a few weeks ago (mentioned above) which they quickly deleted except these ones are still there!

I wonder what it could be?
Top

https://youtu.be/AGJB0b-C0Sw
Credit to Jack Silkstone for this latest winter construction vlog, but he says he can hear some noises but can anyone else here it? He did say on it that he dosen't know if the camcorder picked it up
Top

SAW: The Ride is having a major service, as both its 2 and 3 yearly cycle services were due this closed season. Colossus is probably being welded back together to get it through another season. Whilst the Old Town rides are all serviced in that area.

If there was a noise, my guess is take a pick from above for the cause.
Top
Post Reply

Users browsing this forum: No registered users and 44 guests
×