Thorpe Park have had a busy day in terms of confirming details for 2018. Along with the news that Loggers Leap will remain closed this season, they have also confirmed on Twitter that all of their rides will open at 10am, while actor-led attractions will open at 12pm.

For those of you wondering about DBGT not being a failure, in its' third season it is already going to open 2 hours after the rest of the park does.
Top

"The future of theme park rides"... is that why it opens later?
Top

Isn't DBGT's budget still from MMM since it's only in it's 3rd year?

And also it seems strange bringing back an attraction from seasonal operations after 5+ years of being scrapped, It gives me a bit of hope for Sub Terra.

I think the budget cuts are actually pretty sensible since it's attractions that aren't the most popular with the only execption being I'm a Celeb there nowhere near as bad as Towers budget cuts for sure.
[Insert Signature Here]

Wait, what? Saw Alive is going to be open during the summer. Wow! I'm in shock. As for the staggered openings, I'm kind of not bothered by it. It kind of makes sense given DBGT has always opened later and IAC is only open half the season anyway, so its not really going to affect a normal day for people.
Top

I'm not bothered at all by the staggered openings. Especially as DBGT is the most technical ride I've ever seen, and really does need that time to be set up each morning. And unlike Alton Towers, Thorpe Park will have openings until 10PM on some days, which makes it a whole lot more justifiable. I don't think this is a costcutting measure as much as it is a help for the park operations, personally, and therefore I must say I support it. Especially with the opening of SAW - Alive

ThemeCrafter264 wrote:
For those of you wondering about DBGT not being a failure, in its' third season it is already going to open 2 hours after the rest of the park does.

I think this is more of covering themselves with their opening times. Derren Brown, as Dom said, never opened when the park did and was always opened later. At least this gives it a chance to set up properly and make sure the ride is OK for a 12pm opening. It's not that it's a failure. It's giving the staff some space and time to work and get the ride up to operating conditions so that guests wouldn't put so much pressure for the ride to be opened. It's an actor lead attraction, just like IAC.

I really wouldn't consider this ride a failure from the reviews from the theme park fans and causal guests who have experienced this ride and who I've spoken to. It's getting more improvements to retain its reliability and is a ongoing development, as well as it being a one of a kind attraction in my opinion.

Like I said, I think Thorpe Park is becoming Merlin's new flagship park. All it needs is a decent hotel and I think it will take over from Alton Towers, I'm sorry to say.
Top

I agree Muppet738. It’s pretty obvious that Thorpe is headed to be the new Alton. It’s been getting superior theming for years, now has a top notch dark ride, has plenty of flat rides and is getting updates and refreshes all the time. This makes so much sense though. Not only is Thorpe Park so much easier to get around in the park but it’s also easy to get to from London, so by all accounts it’s a very smart move.

This is reason, at least in my opinion, Thorpe’s (and Chessington’s) future is one I’m very excited to see!

Thorpe really are killing it and I totally agree. To me, Thorpe has already become the flagship park for Merlin. Although I do question some of their decisions, most of the time they have actually turned out to work for the park. I am more excited about Thorpe this year than I am Towers.
Top

Following yesterday's announcements, the exact dates that the seasonal attractions will be open have been added to Thorpe Park's website.

It is confirmed on its page that SAW Alive will remain open until park close after opening at 12pm, so that will mean an impressive 10 hours of operation during the late-opening summer dates which will actually be longer than when it opened at 3pm during Fright Nights, outside of half-term week. There is also nothing to suggest that it will be an upcharge attraction on the page either, although I expect admission may be a little more expensive on the 10am-10pm dates.

Interestingly, no dates have been added to Rumba Rapids' page that would indicate a seasonal opening, although whether this means that it will actually be open all season, or if it's just that the page is yet to be updated, is unclear.

The Daily Start have released an article with details about The Year of The Walking Dead. Things include :
The Walking Dead Living Nightmare Extreme (the live action horror maze at its most terrifying) available only for May Half Term (25th May – 3rd June)
Summer Nights, opening until 10pm (Thursdays, Fridays and Saturdays from 26th July – 1st September)
Zombie Hunt – an extreme battle for survival in woodland on the outskirts of Thorpe Park Resort for the six weeks of summer (21st July – 3rd September)
Fright Nights – returns to Thorpe Park Resort with a Walking Dead theme (5th October – 31st October)
Top

Personally, I am not a fan of the Walking Dead brand, although, credit must be given to Thorpe Park for trying something a little different!

I do wonder how this will appeal to families, if indeed this is now their target market?

Will we see anything about the X retheme? I heard it was supposed to be announced today, but I’m not sure
Top

Yeah they're probably announcing the X retheme today, It'll possibly be announced later on in the day.

Thorpe Park have confirmed what was reported last night with the following post on their Facebook page.

An invasion of Walkers descended upon the Island during FRIGHT NIGHTS and we thought the battle against the dead was won…we were wrong.

This season, the apocalypse is nigh at THORPE PARK Resort with a deadly calendar of unmissable events.

Join the crusade with BRAND NEW experiences such as Zombie Hunt in the summer and Apocalypse Weekend challenges in May & June.

We’ll meet you at the Safe Zone... 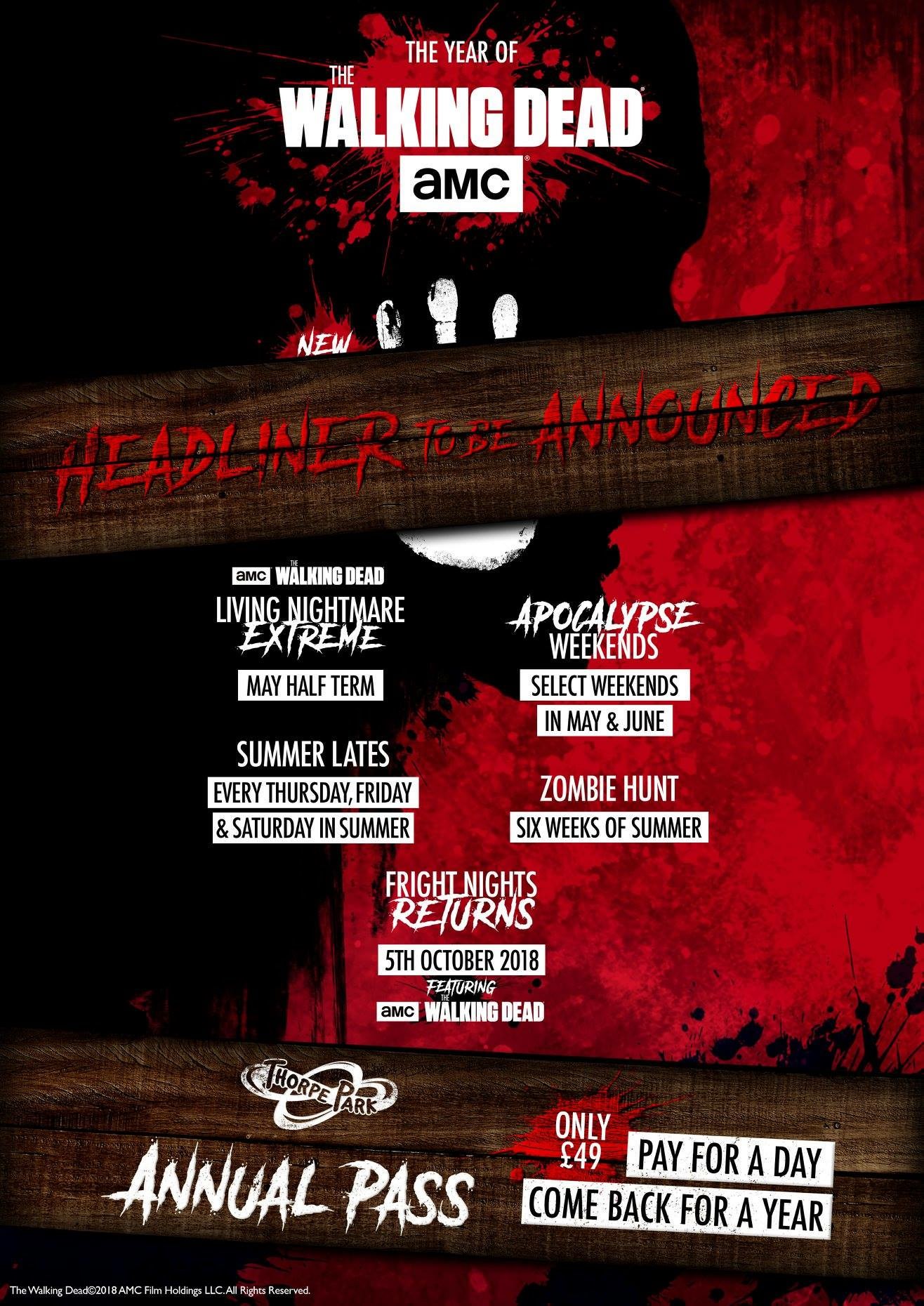 Users browsing this forum: No registered users and 79 guests
×