Ah thanks for the info! I went on Saw Alive at Fright Nights and didn’t think it was that great. Would’ve liked to have spent 2 hours waiting for Living Nightmare but the queue time kept increasing so we didn’t bother

Yesterday evening, SouthParks attended a preview of Zombie Hunt, which is a thoroughly entertaining addition to the park.

Running every day from 12pm until 6pm, the event features great humour and light scares, and is sure to be a hit over the summer.

You can experience Zombie Hunt from today until 3rd September. 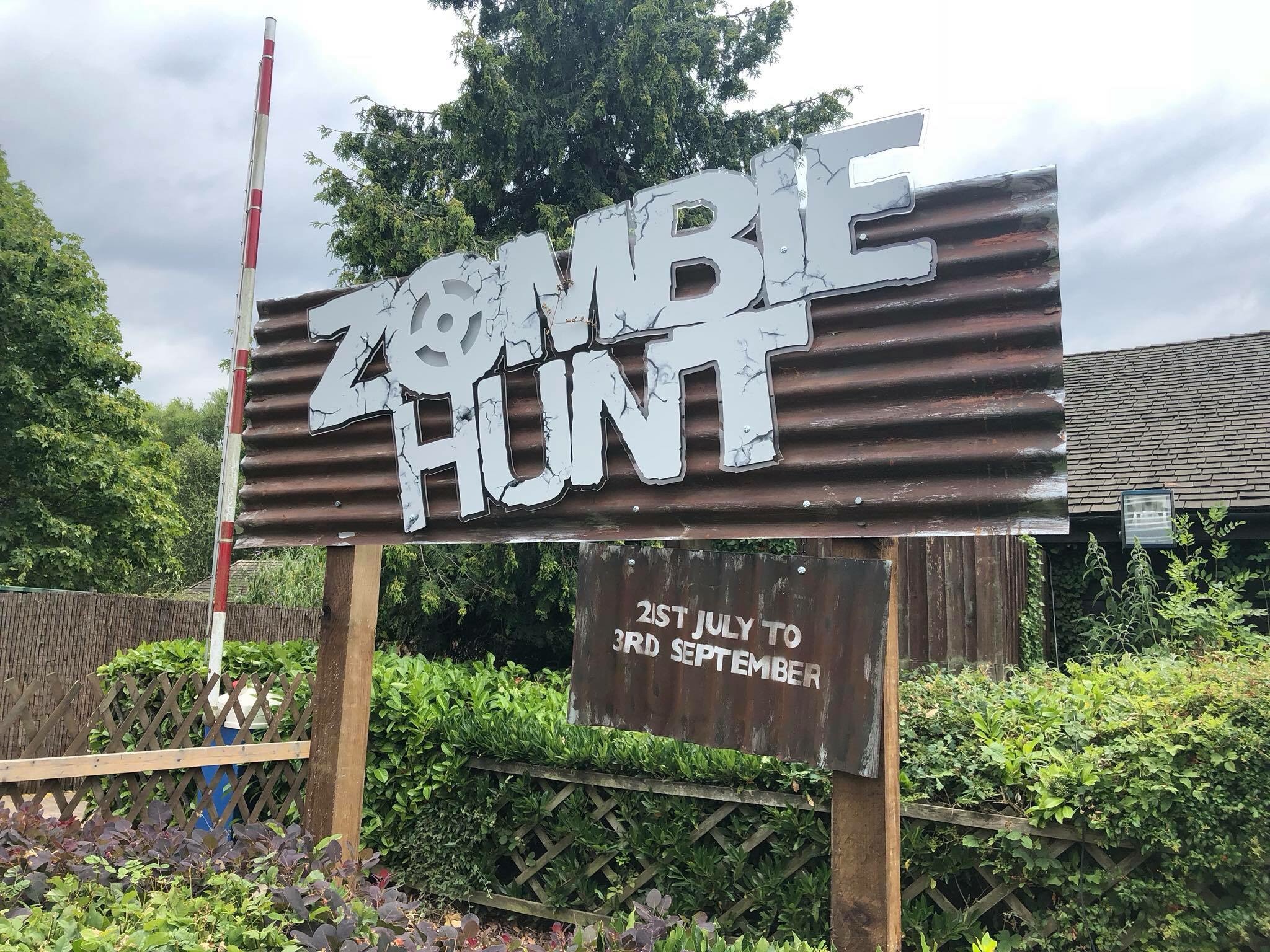 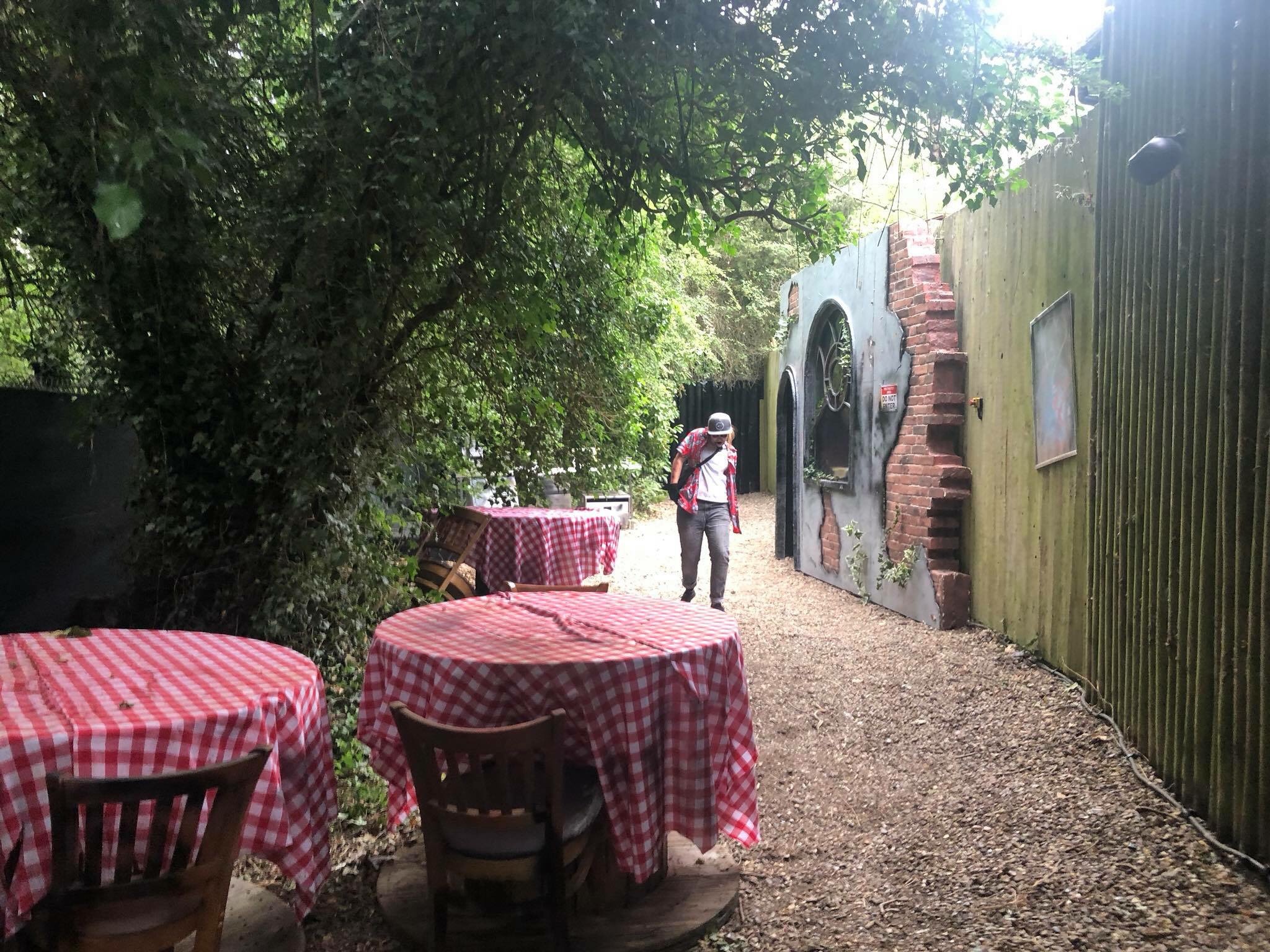 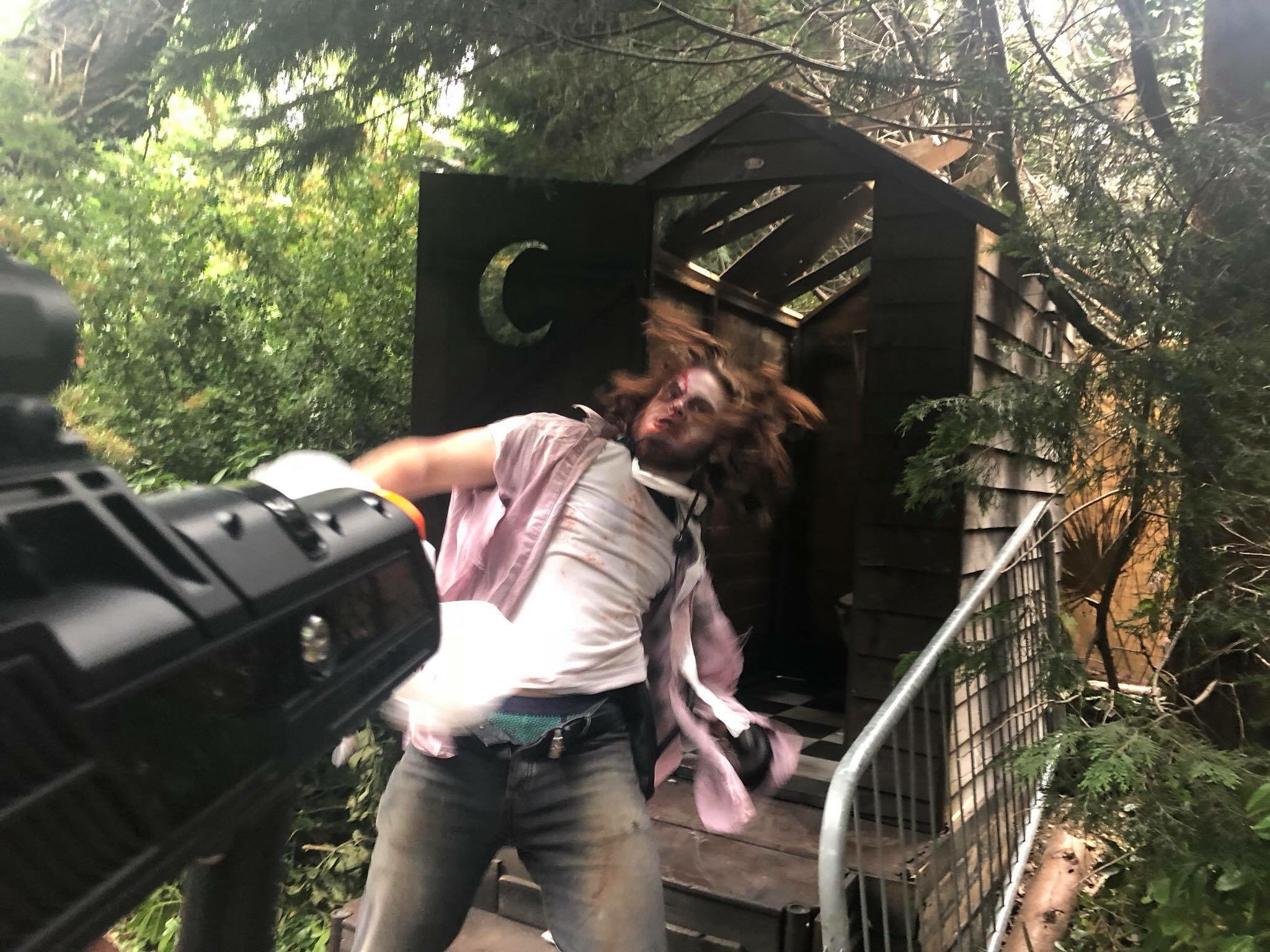 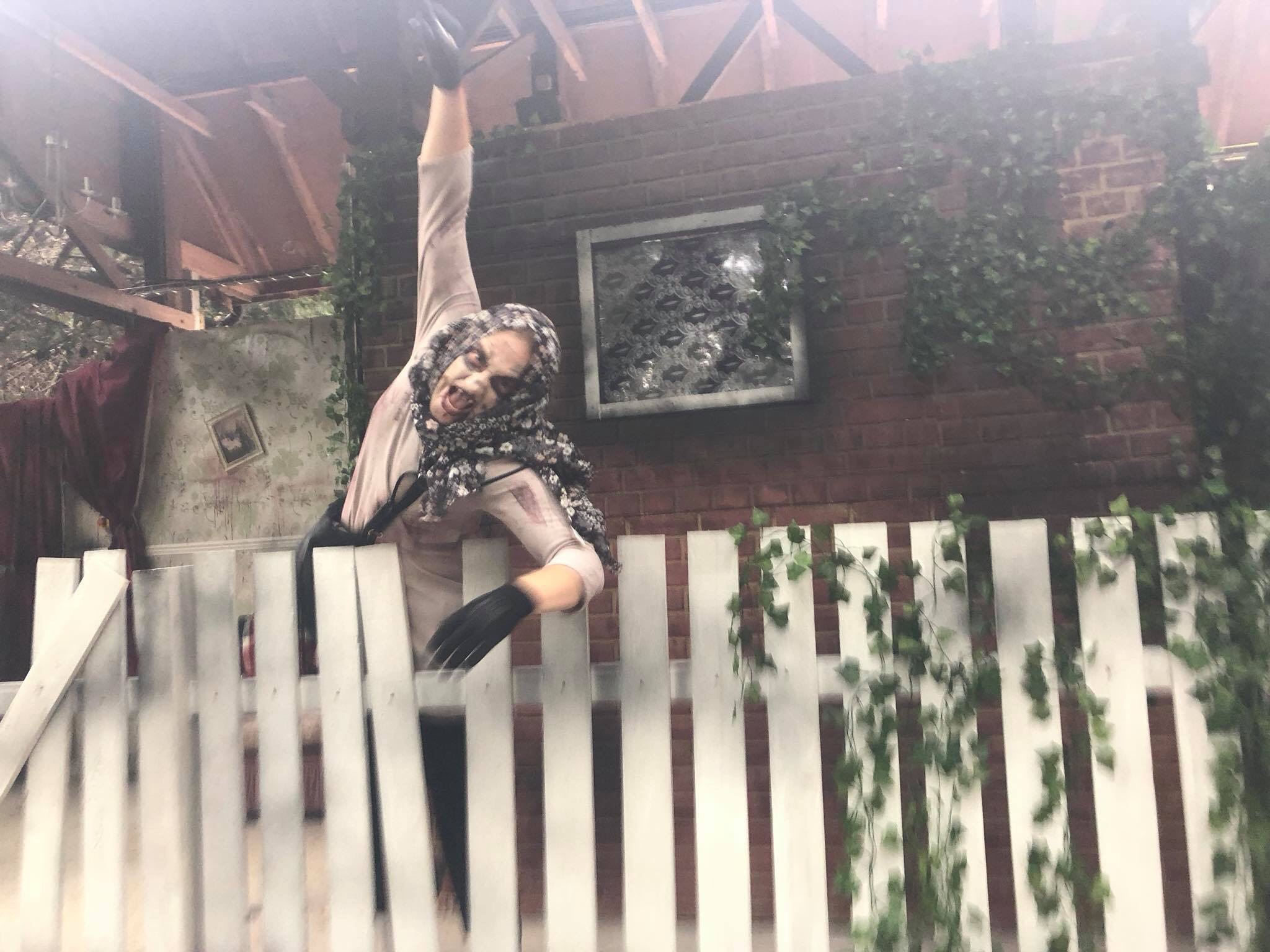 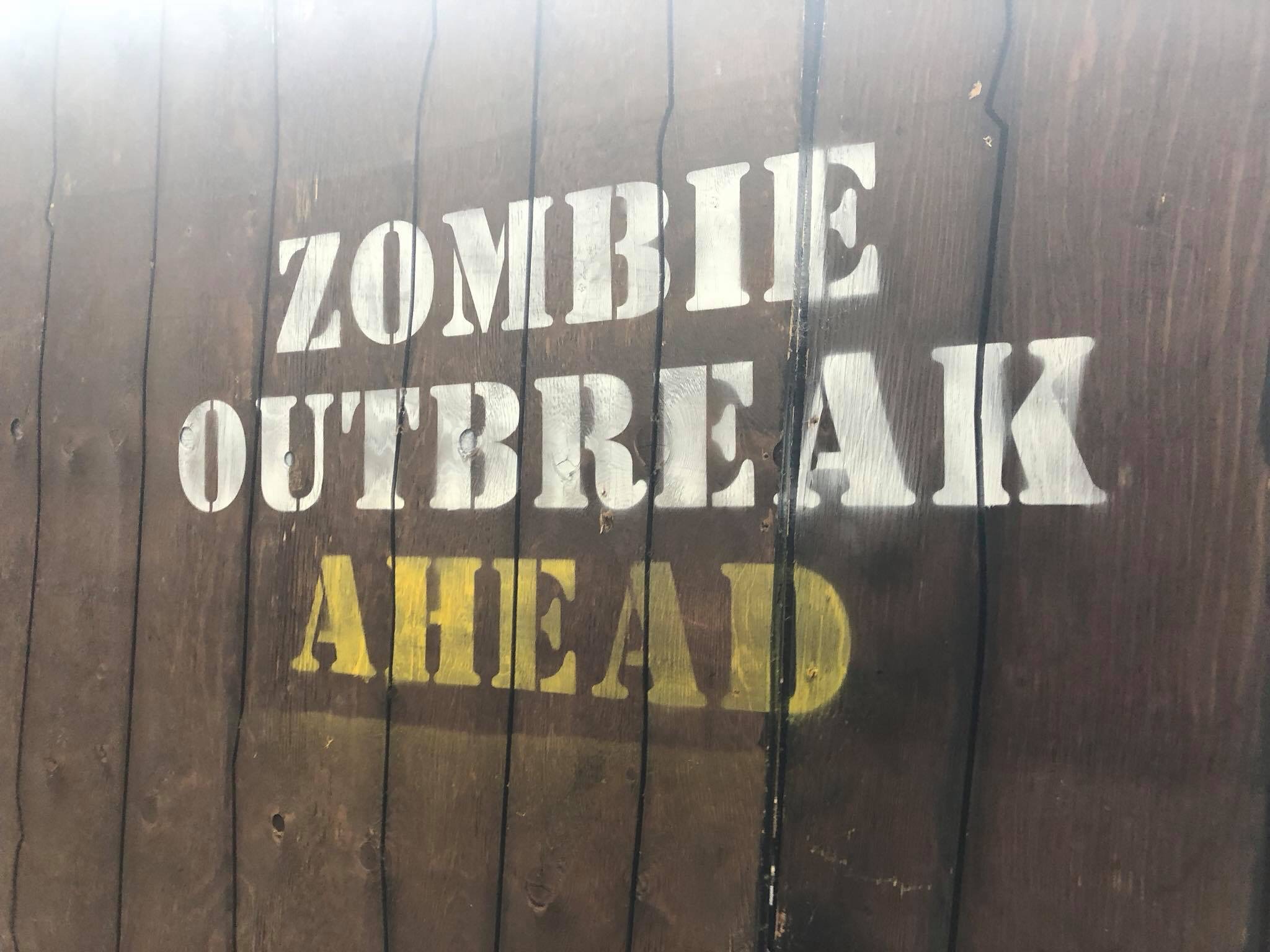 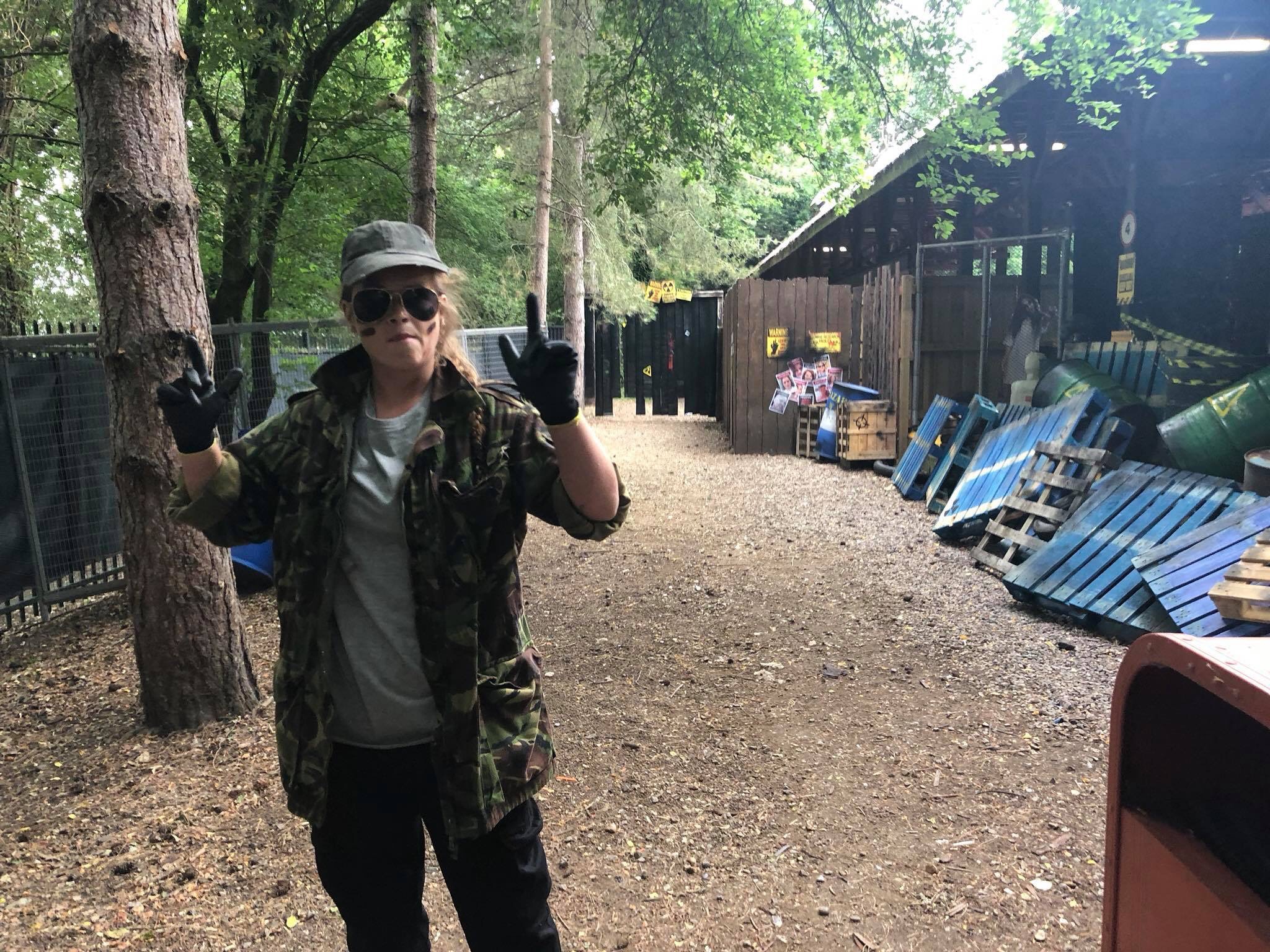 This looks like it's going to be fun. Looking forward to experiencing it tomorrow.

Seems like it should be popular as they've already sold out of tickets for this weekend.
Top

Is it me or does the third picture remind you of Shrek?
[Insert Signature Here]

Funny how his trousers are undone.. would like to know more of a back story for that guy in the toilet

At 21:59 1 minute before ride close everything is either closed or at the minimum wait time of 5 mins. That is except Storm surge which still has a 35 minute queue.
Nemesis Alpha: Your worst nightmare; Hold on tight - Time to see fight or flight...
B&M Wing Coaster...
Top

Everything (apart from Inferno which was down to 1 train) was basically walk on from 9pm. I did 3 rides on Saw, Inferno back row, and 6 or 7 cycles on Rush in just over an hour. I'm certainly not complaining!
Top

Yeah! It was crazy. We just looped Swarm a ton. Four rides in 10 mins or something crazy like that.

The pop badge trade thing was surprisingly fun!! I did the pop badge hunt, and ended up with a soundtrack (which I adore to shreds). So weird... everyone in the pop badge place were executive Merlin marketing employees.

Zombie hunt is beyond fun. Really, a special experience. I wish it never had to leave. Managed to get 34 hits 2 kills on my final go which I’m pretty proud of. Only note is that the attraction could be longer, but for the level of theming and the amount of fun, I think it’s just pure fantastic. A must do.
Top

General park operations were a bit of a let down today, with the park overall not feeling like it was ready to start after the late closing yesterday.

The main gates were very late opening, causing the crowd to clog up security, as the area before the gates was completely full of people. When they did open at 9:50, for whatever reason they only opened a single gate and two turnstiles for season pass holders only. 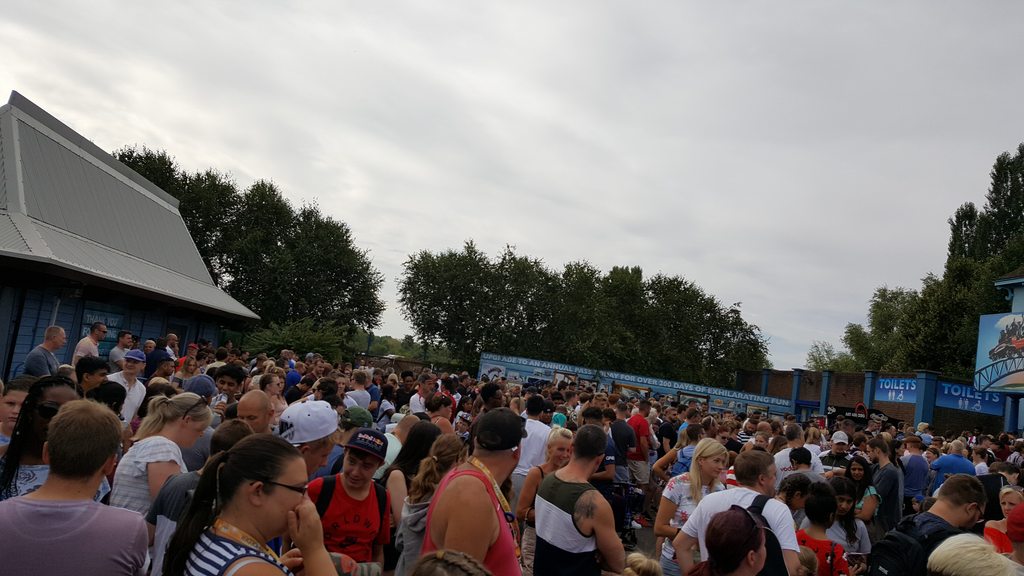 Several rides weren't ready for operation on time, notably Colossus and Stealth took another 30-40 minutes to open. Nemesis Inferno only had one train in operation, which I managed to get the first ride of the day on, but ended with my hand covered in grease. Strangely, Stealth didn't have any wrist bands at bag drop, so you had to remember the number instead.

Nearly every construction change I saw from last week's trip, had changed again. The archway from the Platform 15 exit had been moved to Zombie Hunt, along with the full tunnel. The bamboo around the Loggers site may have been put there as part of the Zombie Hunt queue, although there are temporary trees on the other side of the fence, which I'm sure are screening for Loggers. Whilst the site next to I'm a Celebrity had changed from what was a dumping ground for site works, into the exit for Zombie Hunt and one of the most themed areas I've seen in the park! So they had been very busy this week getting it all set up!

Could see a little bit of Loggers Leap from Saw. It's still there, but the old tunnel section is completely overgrown into the Loggers channel. I haven't found a spot in the park where you can see the drop anymore.

Speaking of Zombie Hunt, I got my first run through on it today, coincidentally in the first group of the day too! Overall I found it to be one of the most lovingly crafted attractions in the park. They've been able to create their own distinct style, thrown in a lot of Easter eggs to the history of the park, employed some great actors and built some fantastic sets. Unfortunately, I found the chances to use the laser guns they gave out were fairly limited and that it was perhaps a missed opportunity on some of the interactive side.

The guns they give out are pretty sophisticated, with holographic red dot sights and some form of reload mechanism. Disappointingly these aren't pointed out and it took me a while to guess that the gun was reloading rather than just simply not working. It was also a disappointment that they weren't doing photos on this attraction, as with the guns and some aviators, you could make some fantastically cheesy pictures!

I absolutely love the style of the attraction. The zombie actors are also brilliant, but I just wish there were a few more things to shoot. It works well during the day, but I really think an evening version with more targets, some great lighting and smoke effects, could make this one of the most fun attractions in the park.

I'll put my thoughts from inside the attraction in spoiler tags.

Spoiler: show
The cheesy, tongue in cheek style I found was brilliant. It was maintained throughout, with the final brother (substitute for sister I believe on some days) making me laugh with his comment about a chainsaw weilding zombie.

The Easter eggs were brilliant. Laughed out loud at the old mascot Mr Rabbit appearing on the missing person's wall. One of the brothers had a quip about the old Canada Creek Railroad being 7 years delayed, as he went off to get us tickets.

I'm not sure what the yellow box targets were for, beyond the initial target practice. We were told to shoot anymore we saw, but I only saw one more in the rest of the attraction and it didn't even register my hit. It definitely felt like there should have been more things to shoot, especially down some of the otherwise empty "corridors" between scenes.

The final area was really well themed with the wrecked car. Slight shame that management were having a meeting with staff in the same area, in a bit clearly visible as you enter and pretty distracting.

I've seen other people talk about scores, but we got our guns taken off us and nothing else said, other than go ride some rides, bye.
Last edited by Dan on Sun Jul 22, 2018 7:13 pm, edited 1 time in total.
Reason: Merged double post
Top

Great to hear your trip report thanks for that! Zombie Hunt sounds amazing so I’ll be sure to check that out. I’m going to TP next week and was slightly concerned to see that Vortex was closed all day today again, when I went earlier this year it was also closed (like it has been lots this year) did you see anything wrong with it?
Top

Dan says hi wrote:
Great to hear your trip report thanks for that! Zombie Hunt sounds amazing so I’ll be sure to check that out. I’m going to TP next week and was slightly concerned to see that Vortex was closed all day today again, when I went earlier this year it was also closed (like it has been lots this year) did you see anything wrong with it?

It's definitely worth checking it out. Very different to anything else in the park.

Sadly I didn't go down into the Vortex area of the park today, as I was only there for a few hours. They only just got it running again a couple of weeks ago, so it's strange for it to close again so soon. Maybe it was just a one day thing? Or maybe the ride time listing for it broke again...?
Top

Thorpe Park have been suffering site-wide power-cuts this afternoon, on the day of the first Love Island Lates. The online queue times suggest that around half of the rides have closed, but it's possible from online comments that the whole lot has gone down, or that there have been rolling power-cuts.

Thorpe Park stretches across the border of the area served by SSE and that served by UK Power Networks. The nearest failure listed by either is SSE, who say the power went off at 13:30, with power restoration expected at 16:30. This can be viewed at: Fault EP6643 on SSE Fault Tracker. Note: SSE is the only supplier. 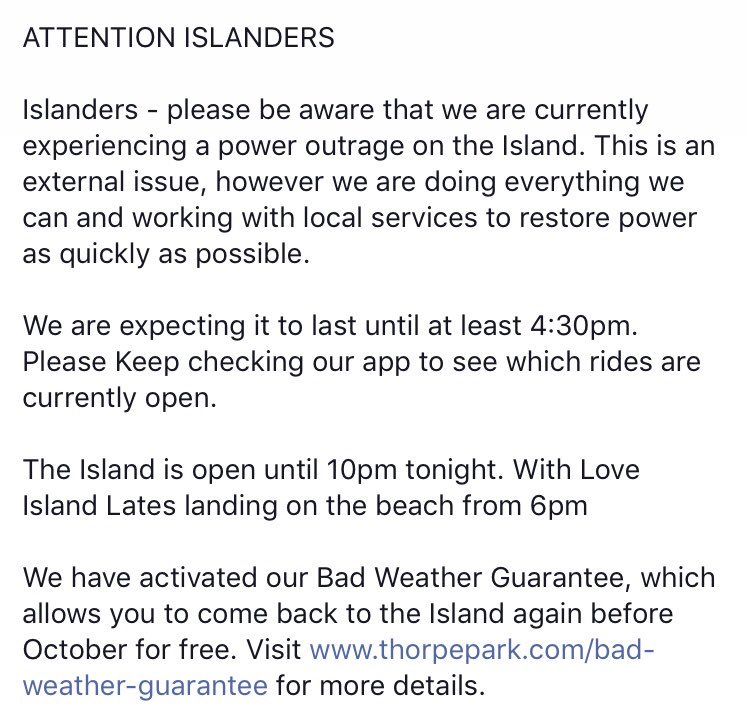 I can just hear the newspapers licking their lips…
Top

Wagstaff04 wrote:
I can just hear the newspapers licking their lips…

They already did and they did such a good job. The Sun reported that the powercut caused people to get stuck up the top of Stealth.
Top

Swarm Chris wrote:
The Sun reported that the powercut caused people to get stuck up the top of Stealth.

While it is possible, it obviously didn’t happen yesterday.

Well Vortex is still closed then, looks like it’ll probably be another long term closure waiting for a part rather than something gone mechanically wrong.

Correct, can't wait to ride it once again!
Top

Did a second run of Zombie Hunt and it was far more polished. They explained the guns more and yes there is a reload button. There is also a button to change it into a shotgun, which once I found that out, well fun was had! I may have accidentally shot one of the humans, but hey, they jumped out on me

The actors were brilliant and more used to how it all works, really reacting to every time they were hit. Didn't need to pre-purchase today, although the park was pretty empty.

Edit: Vortex looks a little unreliable still. Frequent downtime throughout the day. Could have been weather related, but everything else seemed to be running fine.
Top

Thorpe Park appear to have a new queue jumper hotline, for reporting within the park. I'm guessing this goes to security.

Edit @5pm. They've now deleted the originally linked tweet and it's looking possibly like they gave out a wrong number from other comments. Thorpe Twitter is saying they intend to have a phone number for guests to use for reporting issues soon.
Top

Thorpe Park had another power cut this evening, on the SSE supplied part of the park again. Looks like it was down for no more than an hour this time.

SSE seem to be having a few too many issues in that area.
Top
Post Reply