H8223R wrote:
This has been hit with a lot of negativity. Personally, as long as this doesn't impact the day to day running of the park or the focus on their 40th Birthday this year, I'm not really that bothered. On another note - could this be the fate of the I'm A Celeb building or will this event be housed elsewhere? It's a bit of a weird choice to go for, it's as if Thorpe are throwing stuff out there just to fill the time between now and the next major investment.

It’s being held in the Lakeview Marquee.

It’s a bit of a confusing move by Thorpe, but with it being free to access, I can see it being somewhat popular amongst a portion of the park’s clientele.

It seems not as popular as they hoped from the social media feedback they’ve had so far, it will be interesting to see how many people actually book one of the ‘time slots’ or whether they are begging for people to come in on the day! I just hope the appeal is there as much as they had hoped. Yeah it’s not my cup of tea, but as much as TP have made some mistakes recently, I’d hate to see them fall flat on their face with embarrassment, so fingers crossed there are some willing people out there who will enjoy this as it’s quite a long period to run for!

Good news is it’s not in peak summer, so perhaps there are other events for the 40th Birthday planned, it’s certainly something I (and sure many of you) would like to see happen anyway.
Top

This is certainly an interesting move from Thorpe Park, and not one I was expecting them to go with prior to the teasers appearing. In some ways I can kind of understand Thorpe wanting to try and capitalise on the growing eSports market. Holding a gaming event will attract some people who may not go to Thorpe Park otherwise and potentially make commercial sense with those people then potentially making return visits and/or buying season or annual passes. What I am slightly concerned about is the choice of partner in HYPD as some of their content on their social media channels raises questions as to the kind of messages they promote to those who watch their channels.

I think what has caused some of the frustration with people is the fact that there is no prospect of a major thrill addition any time soon. Had there been some form of planning application, or signs of construction, then people may have been more accepting or forgiving knowing something bigger was in the works.

I'm concerned that Thorpe have dug, or are still digging, themselves into a public relations disaster and are actively damaging their brand. The public response yesterday was overwhelmingly negative and somewhat unprecedented. The negative feedback I felt, was coming from a wide range of guests and not just enthusiast followers who want an RMC.

The problem I believe is more fundamental than simply people disliking a single event. The problem is that people's perceptions of the park seem to be changing more widely and becoming more negative. Comments yesterday were using terms like "cheap" and "not interesting", along with questions about why no real developments were being made. The park was quick to respond in a couple of cases, questioning how people could judge the quality of an event before seeing it. And that is the fundamental problem: people saw their advert and judged it poor, based on their perception of the park. People rightly should judge things based on their perceptions and experiences. Goodwill towards the park seems to be draining rapidly.

I agree with Lakey above, the backlash seems to have been amplified by a lack of public plans from Thorpe. None of their developments in the last 6 years have earned a lasting positive perception, despite what the park may claim, so people have been holding on for the next new thing to rectify this. The parks own publicity, both online and in-park, has several times been hinting at new things coming, promoting the building excitement. Presumably, fully well knowing that new things were not coming (the Project Zer0 case being an example that they definitely knew nothing was coming). So they've created this atmosphere of people expecting something new coming; and then it not. It's then always great to watch a certain subset of the community turn on people and mock them for their disappointment.

Thorpe Park need to be taking a long hard look at their public image right now. They're going into the new season with what feels like very little positivity. The public perception of the park is becoming more cheap and uninspiring, rather than exciting and entertaining.

It's the parks 40th year, and it's sad to see where the park currently is.

Unless Thorpe really do pull something unexpected and superb out of the bag, they have really ruined the chance to do something truly special for their 40th birthday.

The sooner they get a new coaster and social media manager the better - otherwise their negative public reception will surpass even Nickelback!

"Thorpe Park Resort has been on our wish list for many years and we are thrilled to welcome such an iconic consumer attraction to the Popcorn portfolio," Popcorn founder Louise Lloyd said. "From brief to pitch we were genuinely engaged by the endless creative opportunities afforded to us with such a loved and established UK destination and are delighted to be their PR partner for what’s set to be an incredibly thrilling year ahead."

Becky Elkin, head of PR at Thorpe Park Resort, added: "As a business centred around fun, thrill and excitement, the success of 2019, which mark’s the Resort’s 40th Year, and our series of exciting new events is key, and we’re confident in Popcorn’s ability to support us in our plans." 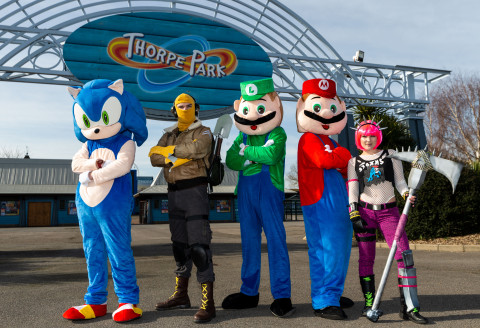 The entertainers they were hiring for? As Metro puts it:

The event promises a ‘fully-immersive audience experience’ – with immersion only possibly broken by a Mario and Luigi combo fresh from Del Boy’s van. 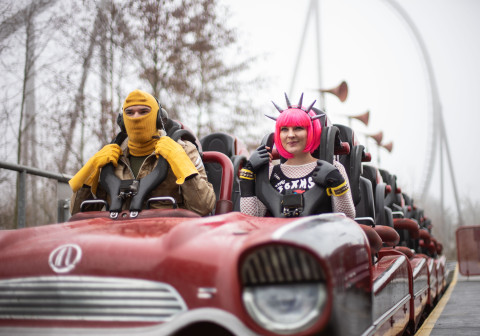 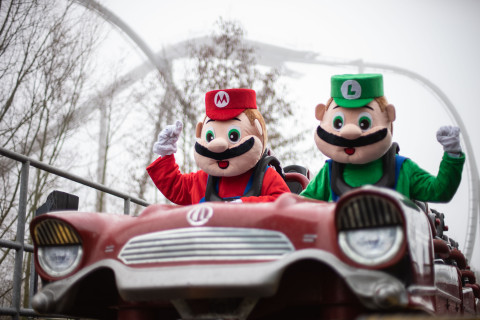 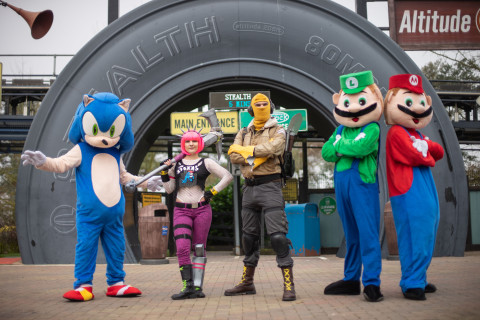 These are all images supplied to Metro from Thorpe Park. Really. That's what Metro say.

It's worse than I thought... There are no words for this.
Please! No more IP's Thorpe! I'm begging you!
Top

On the theme of awful sponsorship... at least the new Tidal Wave sponsorship isn't as bad as the old Fanta stuff at towers

Those costumes are really something. I’m not sure how to describe them on here without violating the bad word filter. :/

Fairly sure no one sponsored these monstrosities

I don't even know what to say to those images published in Metro. Yes, you would expect the Resort to put out something to the press to annouce the gaming event, however these images don't create the best of impressions. I really, really hope the Resort have something else lined up for the summer and that there are plans to improve FRIGHT NIGHTS for this year, otherwise I fear that the Resort may see a very pooor year

I know this seems bad, and that's because it is. But Thorpe have done some great things this closed season. The winter work series has been amazing in my opinion and given a good insight into their work. Thorpe have said in their statement about events in the future, so there will hopefully be better to come.
Please! No more IP's Thorpe! I'm begging you!
Top

Actual reaction to those pictures.

Its like they're aware of the awfulness that this past week has been, they're trying to be self aware, but its not working.

I saw a few facebook comments of non enthusiasts basically saying 'Why should I take my kids out to a theme park to get them away from video games, only for them to play video games whist there?' Which I think is a valid reason. HYPD don't even have much of an online presence. Not that many followers for them to be a big headlining act, you'd be better off to get one of the bigger theme park youtubers to host

They are saying don't judge the event until you see it but honestly I'm expecting it just to be a bunch of xboxes and some tvs in a extremely hot room where you can pay £7 for a game of beat saber.

Honestly, it looks tacky and very unprofessional. I'm really not impressed with Thorpe's pre-season marketing so far, it just doesn't look like they care about this being their 40th year.

As someone who enjoys a bit of cosplay every now and again, I can say that the Fortnite characters are pretty good I guess.. Sonic could be a lot better.. but what in the world is that Mario and Luigi costumes..

Literally looks like they have gone to the party store 'LuvUBabes' and got a cheap outfit for £10..

If this is the "magic" that Thorpe/Merlin can give to the GP, then this in my eyes is an insult to the gaming community.. especially since they holding eSports! Enraged isn't even a good enough word for this.
“A surprise to be sure, but a welcome one”
Top

This is very disappointing from Thorpe, it looks like they just tried to come up with some quick marketing to try cover bad press and bad reactions, so they shoved a few people in tacky costumes, someone got out their smartphone took a few photos and emailed them over to the metro! Like seriously, what are they doing, they need to get their act together pretty quickly or in a very quick timeframe there won’t be a park to promote....
Top 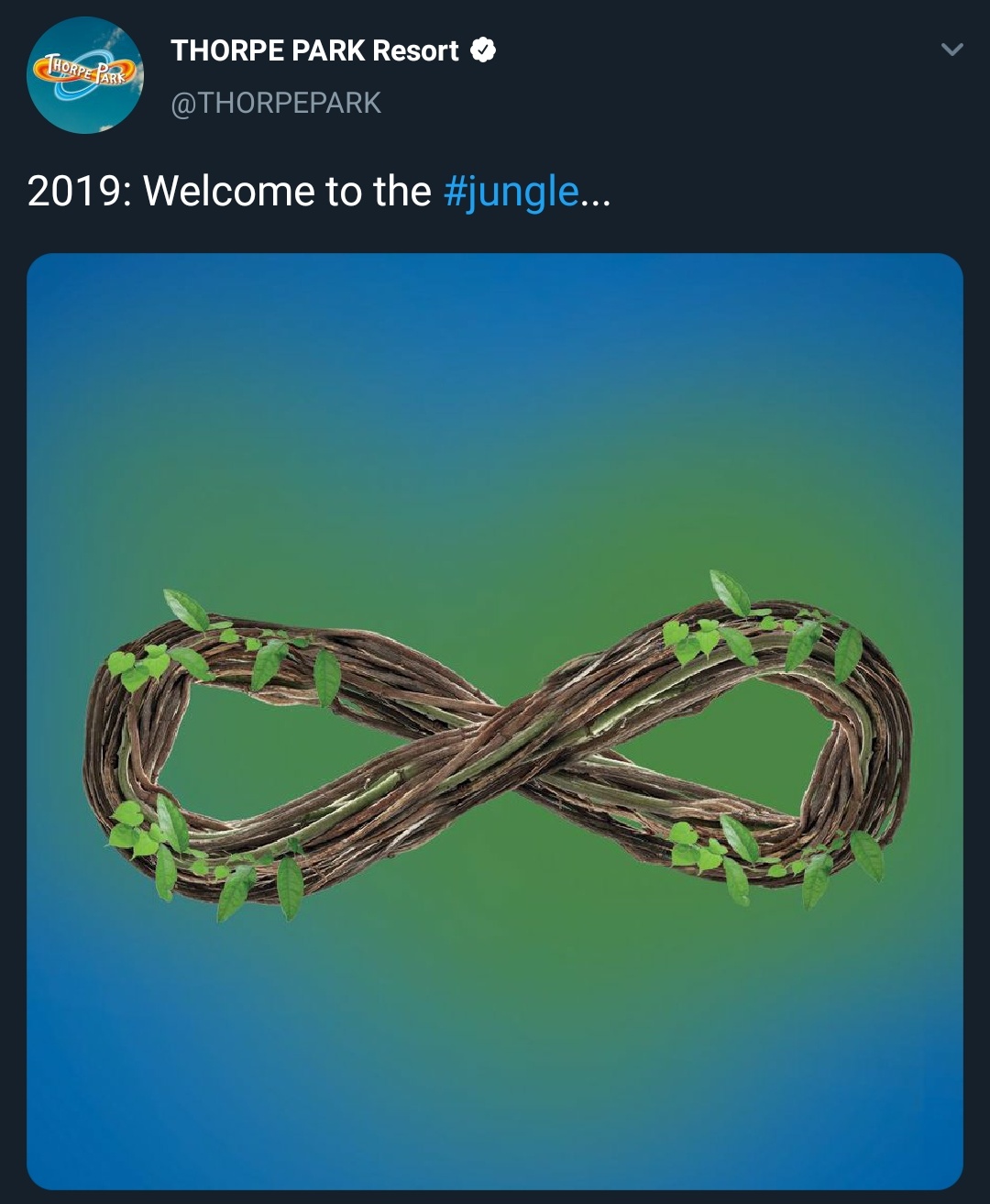 Hinting at work taking place around The Jungle area maybe?

Yes just seen this one on twitter! Interesting how all of the stuff they’re dropping keeps using variations of their logo. I know that there was some things planned that way but they never went into exactly what that was.
Last edited by ProfBurp on Thu Feb 28, 2019 1:26 pm, edited 1 time in total.
Top
Post Reply

Users browsing this forum: No registered users and 49 guests