Just back from a quick visit to the first Apocalypse Weekends event.

The park changes a little, with some small scenery changes, staff costumes/make-up and some of the speakers are taken over by the event. It's a fairly small addition, but it's a bit of fun all the same. Here's the updated entrance:

The challenge is to find the QR codes around the park, with the app giving clues to them. They're not particularly difficult to find and you would find them walking around the park normally. I wont give the locations for them, but one is in a pretty funny place if people aren't paying attention.

Staff have been given a quick make over from the Walking Dead: The Ride makeup team and with the altered audio, especially on the Swarm, it does feel like more of an event in certain parts of the park. Other parts - well it feels like a normal busy rainy Saturday. Shame there weren't any walkers - maybe could have had a few being dragged around like Michonne used to.

I arrived at 3pm and was quite possibly the only person scanning the codes at that point. When I went to get the pop-badge from the Megastore, they had to ask around until they figured out who was handing them out, so I'm hoping I wasn't the only one!

It's nice that they've done something different for a few weekends to give variety, but it's certainly not an event to make a special trip for.

Edit: It would appear I'm now humming the The Walking Dead: The Ride sound track which is playing in a lot of locations around the park. Well played Thorpe Park, well played

I did Apocalypse Weekend today as well so don't worry about people not doing it. Also spotted a few doing it around the park. It takes about 10/15 mins to complete but is fun. To me, this looks as if they're trying it out cheaply to see how it works, and then if people do it they might try a more complex system. Personally I like it but I hope it gets harder and more complex. I think it could be a big success in the future.

On the other hand, today I saw Quantum running, which made me smile. It's good to know that it isn't SBNO anymore.
Top

Well that's good that others were doing it too!

Did Quantum run with guests? When I arrived I walked past it and saw mechanics poking it, but the board's were still up suggesting they had no intention on opening it today.
Top

I'm not sure if this has been confirmed officially yet but on May 19th for Thorpe's 10-10 event day, Living Nightmare will supposedly be open for the day to Annual Pass Holders. As well as this, effects could be heard being tested yesterday on sight with numerous audio effects being heard from The Walking Dead: The Ride's queue line.

Does anyone know what’s happening with Vortex? It’s down as closed on its website page and “Returns in 2018” on the queue times app. I’m hoping it’s not gonna stay closed for long but I don’t know.
If you hear people singing random songs on a rollercoaster, it's probably me and my best friend #SmileAlways

DeadJack5 wrote:
I'm not sure if this has been confirmed officially yet but on May 19th for Thorpe's 10-10 event day, Living Nightmare will supposedly be open for the day to Annual Pass Holders. As well as this, effects could be heard being tested yesterday on sight with numerous audio effects being heard from The Walking Dead: The Ride's queue line.

The signage is all up and ready for it. They had the building open for work yesterday, I'll swing by later and take a look.

They've been moving portable flood lights in around walking dead, I'm guessing ready for next weekend.

Edit: Quantum is open again this morning, but looks like having restraint issues as they're checking them multiple times.

Vortex is closed and the"currently unavailable" signs have been moved to is entrance. There's no sign of any work happening at the moment.

Edit 2: No sign of movement around living nightmare other than some tidying up. What's a little weird is that the entrance is currently set up with a functioning waiting time sign, but that it appears to feed straight into the old Slammer ride area. So unless they can pick up and move the entrance, it's possible we'll be entering a different way this year.
Top

Yeah I noticed that too. They seem to be using the Slammer queue or something because the Living Nightmare Sign seemed to be (to me at least) over the old Slammer one and leading to its queue. How could they even do that? Is it that they've edited the old queue line?
Top

They had the paved area that they used as the queue entrance last year open today, which gave a better view into the site as it only has chain link fence.

Just looked back at my pictures and yes the Slammer sign has been removed and is currently left up against the toilet block wall. Can't see much more detail, but they are definitely using at least some of the old Slammer queue. Seems like there is some chain link fence in there, but that could be part of the Slammer ride site itself. There's a lot of vegetation there and they've been moving trees around, with one currently sat in a large grundon bin. I wonder if this will make things more permanent like the Saw maze.
Top

Dom wrote:
Theme Park Guide are reporting that Living Nightmare Extreme will be open to pass holders from 6pm-10pm on Saturday 19th May

Fantastic! Thorpe are doing a really great job (assuming Walking Dead doesn't break down again. - but it seems to be running really well now) of events and little extras for passholders.

They'd best get that tree out of the grundon and back into the ground somewhere then!
Top

As posted by our SouthParks Facebook page earlier; Sticky Sisters is now open at THORPE PARK Official, replacing what was once Bush BBQ. The outlet specialises in ‘chicken wings and tasty sauces’ as well as offering burgers, and a bar.

Will you be trying out the newest food outlet to arrive on the Island? 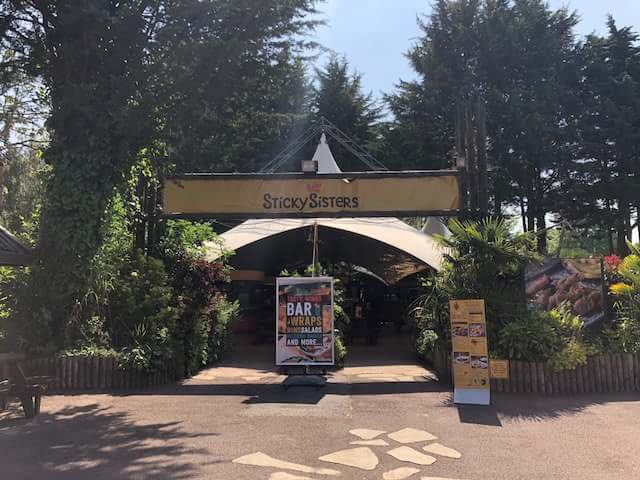 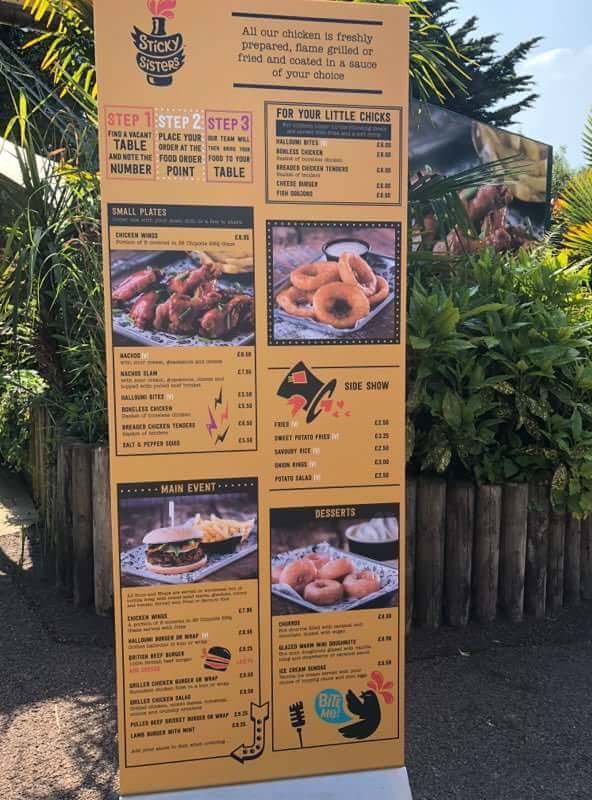 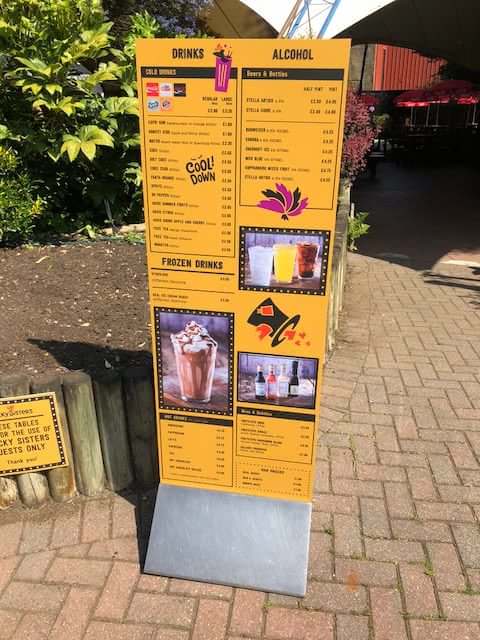 Thank you to one of our TTSP Community members for the photos.

Operations really weird today. Nemesis was running one train with minimum staff this morning creating a 70 minute queue with barely anyone in the park. Stealth looks like it might still be on one train.

Whilst Walking Dead is operating with more actors than I've seen before.

Also some of the card only restaurants do still take cash. Big signs at the Burrito place saying card only, but watched people paying in cash.
Top

I wonder if they take cash, but not advertise, due to those not having access to a card?

While they say it is to speed up payments etc, there is a cost element involved as it costs them more now to take and bank cash, compared to card. This isn't limited to just Thorpe, but retailers in general.

Quite possible to try and deter those who do have cards with them from using cash. However, I've seen people queue, get to the counter see the sign and leave. So having the secret hidden cash option is definitely weird!
Top

Umm... Does anyone know what that video that Thorpe uploaded earlier this day called Thorpe Park Living Nightmare Banned -DO NOT USE-? When I clicked, youtube wouldn't allow me to watch it. I am abroad so it might be a location issue but it doesn't say anything so it raises my suspicions.

Hmmm, that's weird. It's not on their YouTube page, and when I search that link, it says that the video is not available...

It was essentially a remix of their The Walking Dead: The Ride advert but with the Living Nightmare Extreme logo at the end. It was up for about 15 minutes before they realised it was public.

Edit: on a side note I'm fairly sure there are ride operators in that advert

Edit 2: As it appears the advert I'm talking about might just be being shown on queue line TVs, here's a video of essentially what was up there. Only the voice over was slightly different.

Going back in conversaion slight (sorry). I tried a couple of dishes from the small plates selection of Sticky Sisters. Honestly, I wasn't overlly impressed. I had the halloumi bites, nacho's and breaded chicken tenders and I was quite dissappointed. The halloumi bites were very nice but there was literally about 5 small cubes worth, I will admit, but the chicken was incredibly dry and the nacho's just looked like they had been plonked on the tray with no real flavour to them. Plus they were quite cold. Service was rather terrible. Queue jumpers and then wait staff who only brought half your order. I will give it another go at some point as it was its first day, but even so, I went when it was quiet and still had service issues. Apparently the one in Farnborough is always rather dead and the food isn't that great there either. I hope things improve for the eatery as it is a really nice area of the park to eat in, especially on warm days.
Top
Post Reply

Users browsing this forum: No registered users and 52 guests
×