Can't imagine it helps that those walkers seem to keep taking out the generator for the Safe Zone...

lewis97 wrote:
Can't imagine it helps that those walkers seem to keep taking out the generator for the Safe Zone...

The park actually gave me a similar reason as to why I was getting random emails and text messages about someone else's booking a few months back!

Staggered openings appear to have arrived at Thorpe Park. From what I've heard in the park previously, they often don't have enough staff to get everything running on-time the day after a late night opening. I noticed yesterday a lot of the coasters were listed as open from 11am, but then opened on time. Today it appears Inferno and Colossus remained closed until 11am. Previously they've opened everything with a single train, then gone back to add the second ones.

My guess is that they list most of the coasters as open from 11am on the morning after late nights, to give the tech staff they have on duty some breathing room to get everything open. Bit of a shame though, especially as Sunday's have shorter hours but the same entry fee as the late night openings. 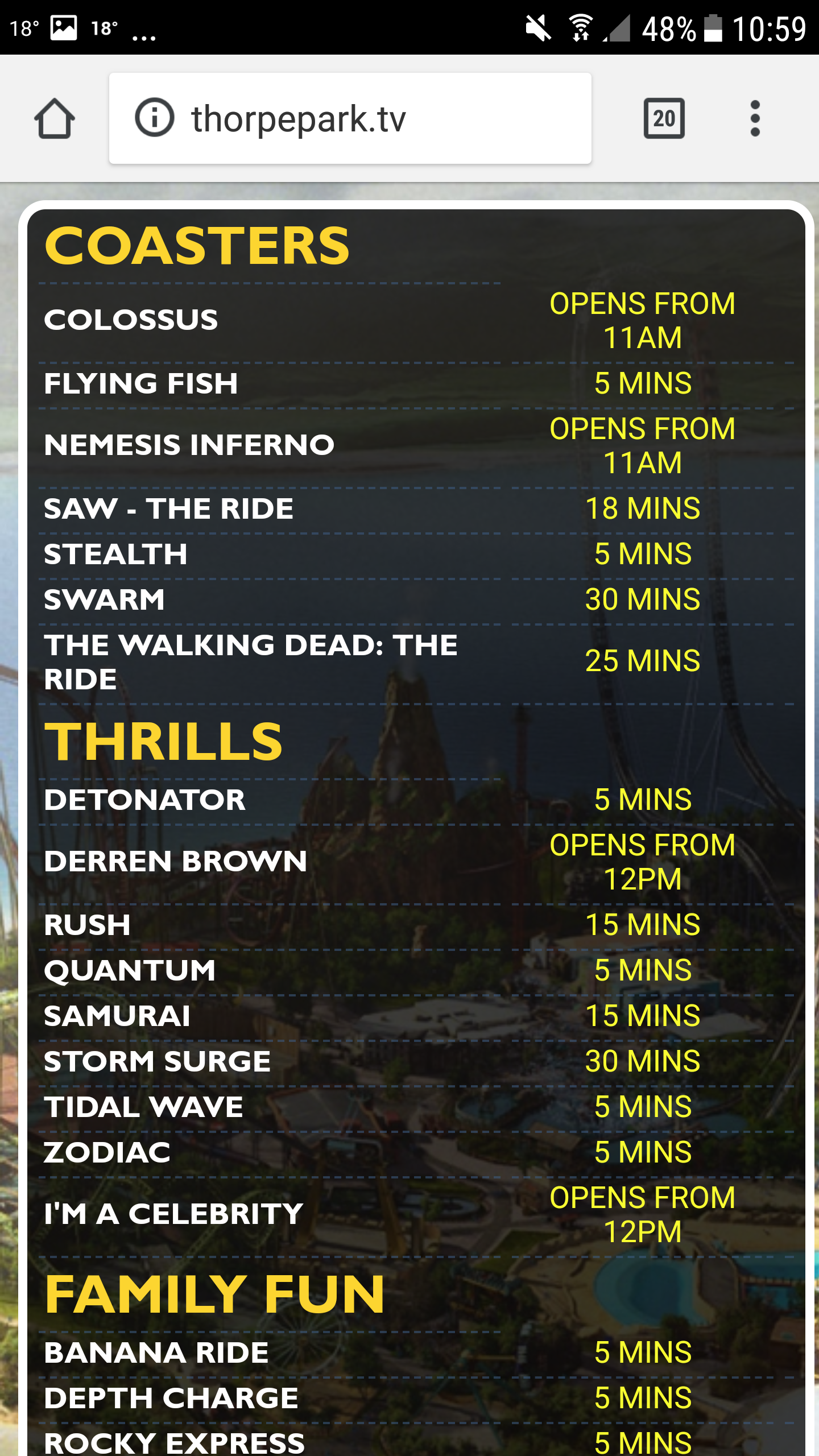 More staggered openings from Thorpe. Having late openings is all well and good, but I would have hoped they'd have the staffing levels in place so it doesn't cause issues for the next operating day. Especially as the park is probably busier 10-11am than it is at 9-10pm. 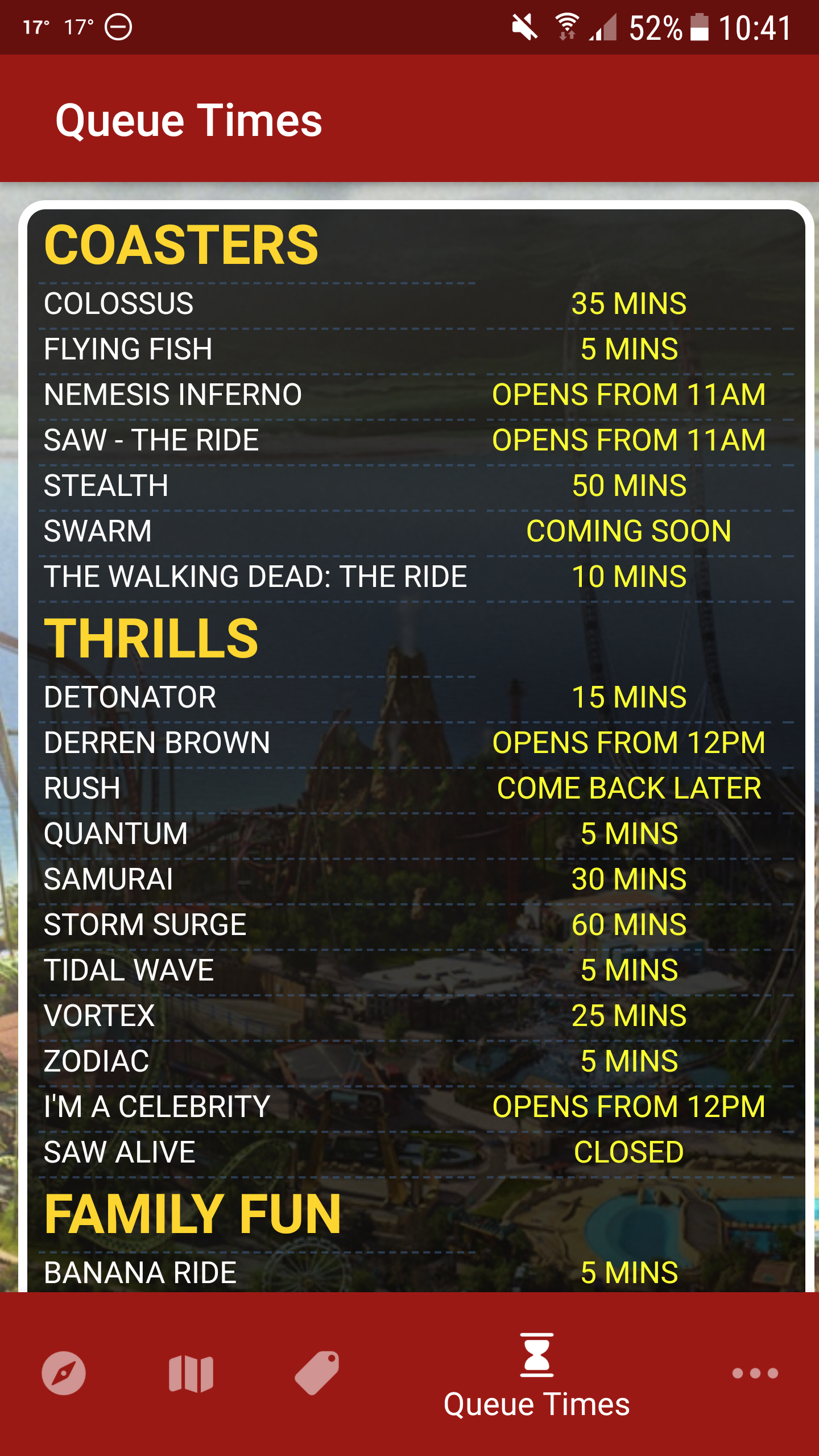 Time for another, weird thing spotted at Thorpe Park, does it have any deeper meaning?

Spotted in the blaster collection point at Zombie Hunt: C.H.I.P 7706. 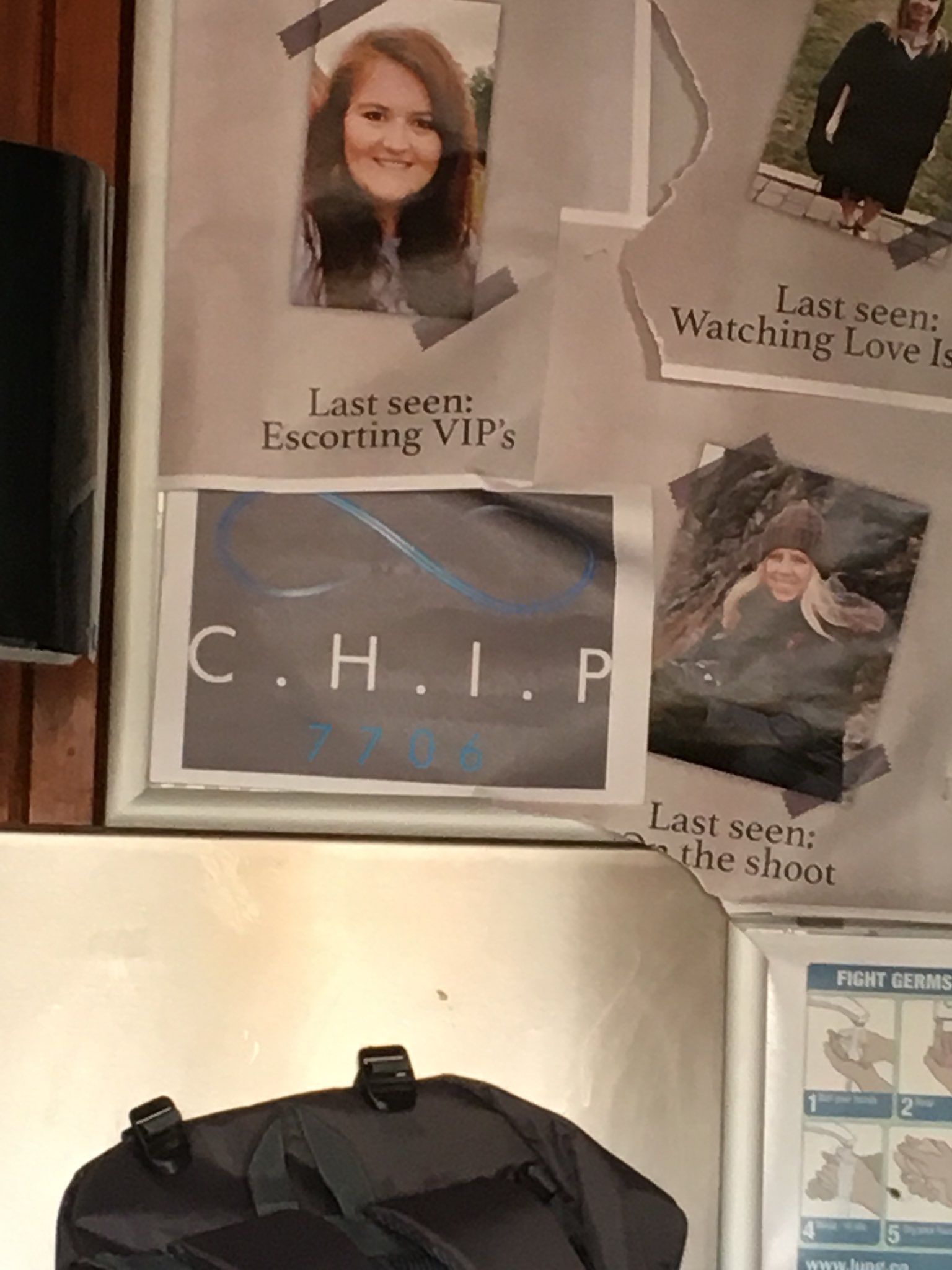 I can't see that it has any relevance to Zombie Hunt, so it's been deliberately placed, unless there's something I'm forgetting. The blue ring is in the same layout as one of the Thorpe Park rings.

Edit: Whilst typing it up, Thorpe Park liked the Tweet...

To me it looks like Galactica for Thorpe park. I have always hoped the 2020 coaster is a B&M hyper themed to the Island like no other and this would sort of support it. It could be Island Express or something and be themed to a tour of the island

Another image has been posted, stating that this can be found over by Blair Witch. 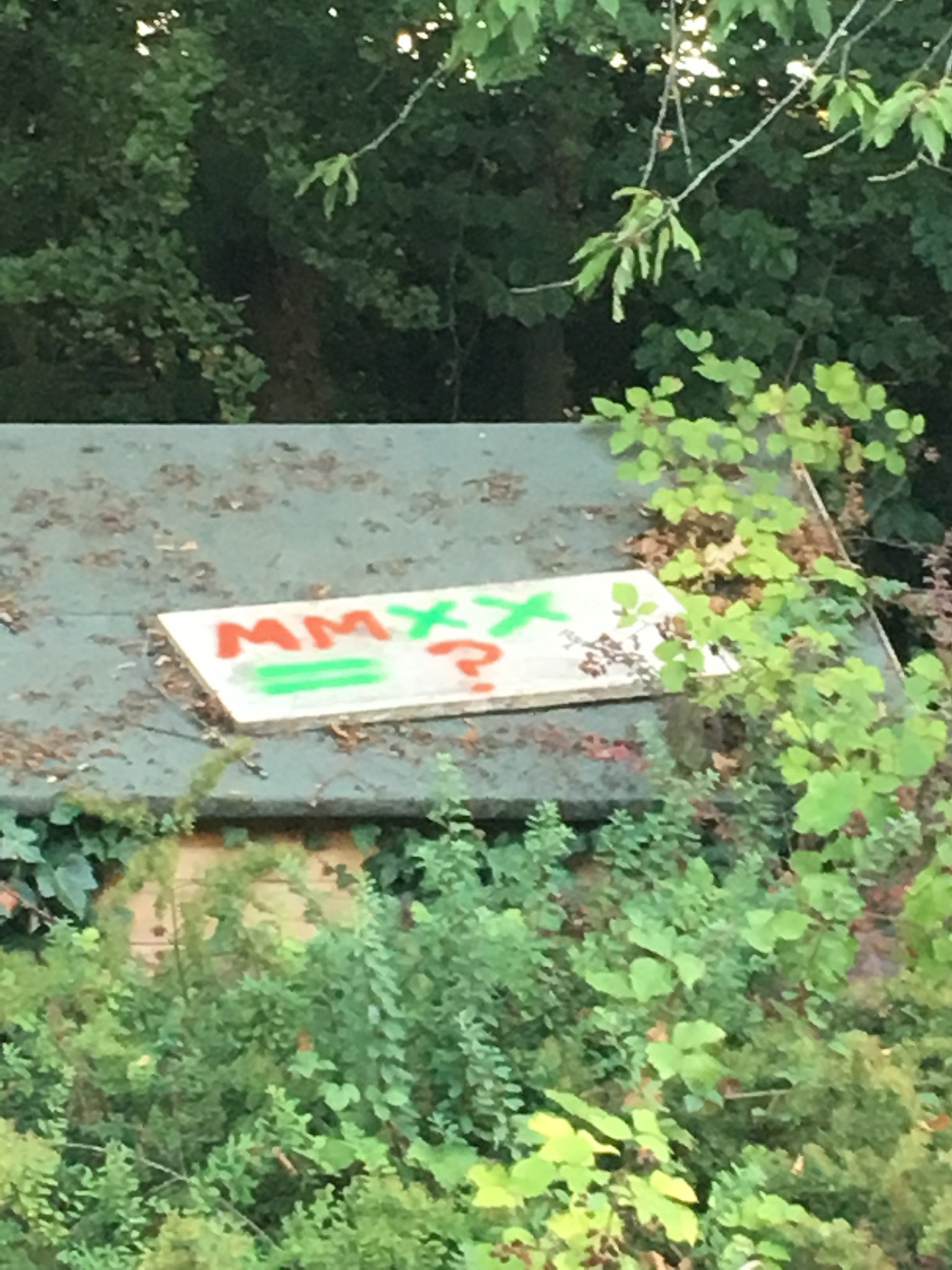 Are Thorpe actually getting near to pushing Project 2020 information. Or is this another example of the design team having a bit of fun?
Top

Ok that one is difficult to deny. Something's happening there. Where in the park is Blair Witch?

Blair Witch runs from Old Town, towards Nemesis Inferno, along the told Canada Creek Railway which used to run to the farm!

Thorpe could be having a bit of fun with enthusiast. Apart from the symbol and opening up the shed, nothing has happened really. Now they have added 2020 speculation then it is anyone's guess.

There isn't that much room down that path to build a coaster so I don't think it will use that route. If anything it will go onto Loggers and Slammer, with the possibility of Burger Kind, the toilets and parts of Old Town disappearing too. Speculation of course, but no doubt we will see a planning application soon, with initial teasers releases at Fright Nights!

Like Justin said, this could be a bit of teasing from Thorpe, remember last year with the "Legacy" sign outside of Big Top? It maybe nothing but we shall see. Very interesting to see

Yep that whole Legacy and 0? issue is something that is at the back of my mind here. We know that the design/construction team like to have fun and have occasionally done things that perhaps management weren't aware of.
Top

A hyper has been loosely mentioned before. Even at one of the past events, but that could have just been another decoy!

I really want the hype train to start, but the park has just done so much trolling in the past! I guess they've got to the point where they could literally stick the plans on the wall and I'd still have a part of me going, yeah... but...

On the plus side for the hype train, there's no mention of RMC, which seems to be used when they want to be more obvious about trolling.
Top

After the success of Wicker Man, I do believe a woodie would be a great choice for Thorpe, but I doubt Merlin will want to outdo their latest rollercoaster so soon!

A hyper seems more logical for 2020, with 2024 being the year of the woodie, but I could see the Loggers site being used for that moreso

I agree that a woodie would be a great addition and that Thorpe could do a more intense implementation. The Loggers site seems more the ideal candidate for it theming wise, but there's a lot of water in the area that they'd have to build on. A steel hyper has the advantage of fewer supports to worry about placing. Unless they somehow manage the drain that area further, or construction really doesn't worry about water!

I think 2024 is more likely for a woodie. Wicker Man was a gamble and I don't think Merlin would have gone double or nothing for having a second one lined up in 2020. Plus you're right, Alton needs all the help it can get in marketing itself right now, building a bigger and badder version of "the same ride" 150 miles down the road so soon, won't do that!

I agree that Logger’s Leap site would be beyond perfect for a woodie but I can’t see them doing one any time soon. It would work so well into the environment and be amazing, but honestly I wouldn’t want another Merlín woodie anyway, I’d love to see a new style of ride and have a woodie in later years. (And Swarm Chris is right... it would totally steal Wicker Man’s Thunder).

I think that 2020’s ride is likely to be in Loggers Leap spot, and I’d like to think it’ll have a lot to do with water, just like Wicker Man had a lot to do with fire. It’d be interesting to watch the Alton and Thorpe get rides themed to polar opposites. I feel like it’d be a nice link.
Top

Thorpe Park have added a new information board at the entrance. It introduces the day's duty manager and provides a phone number that guests can text if they have any issues. It feels that the park is trying to be more open and friendly with guests and I feel is a nice addition. 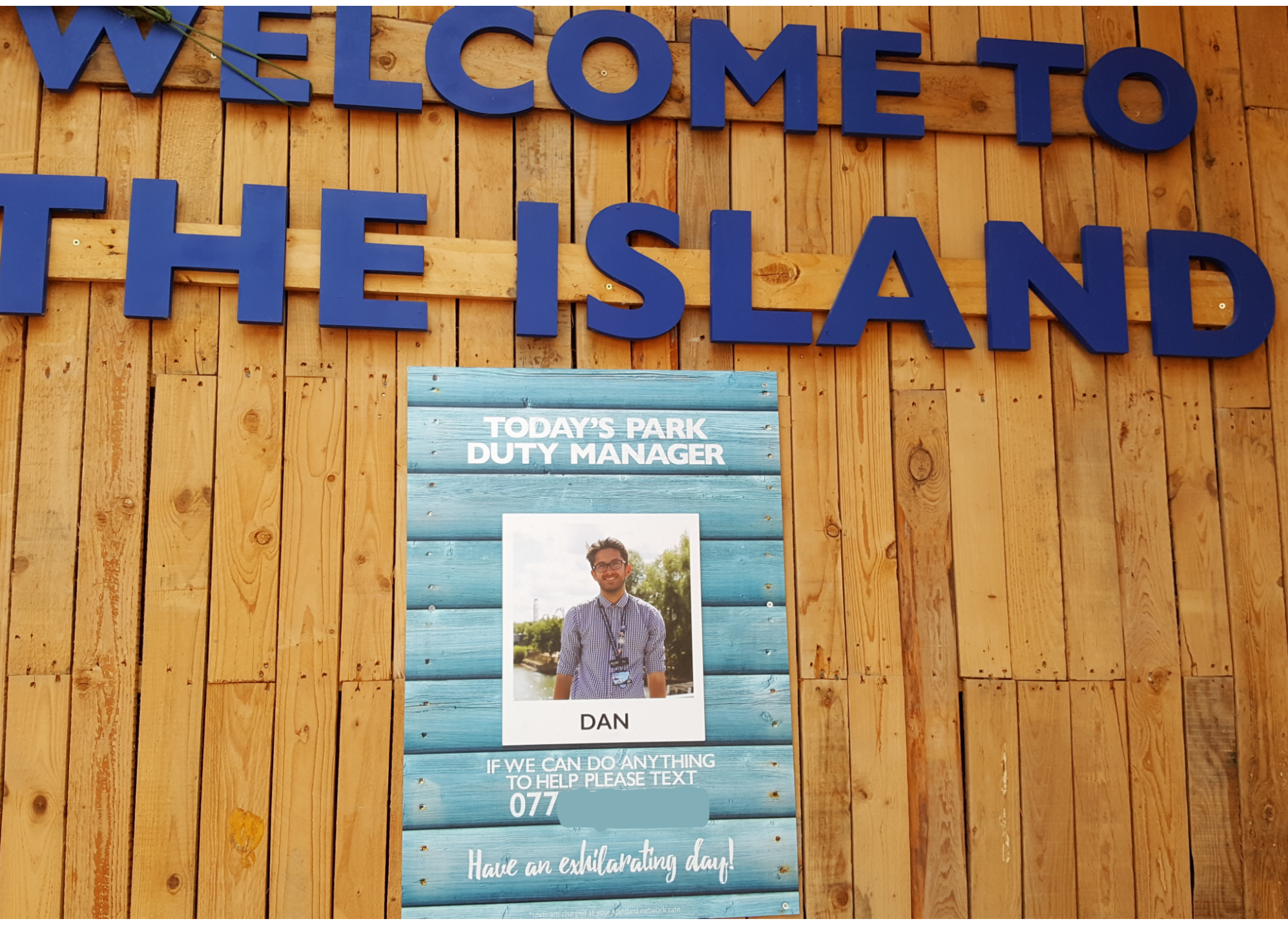 I've hidden the phone number as I don't believe Thorpe have published it beyond this board.
Top

Apologies for the double post, but forgot I'd spotted this too.

Thorpe have installed an array of solar panels across the shallow roof of the Walking Dead/Living Nightmare show room pyramid. Another positive thing Thorpe have done recently. 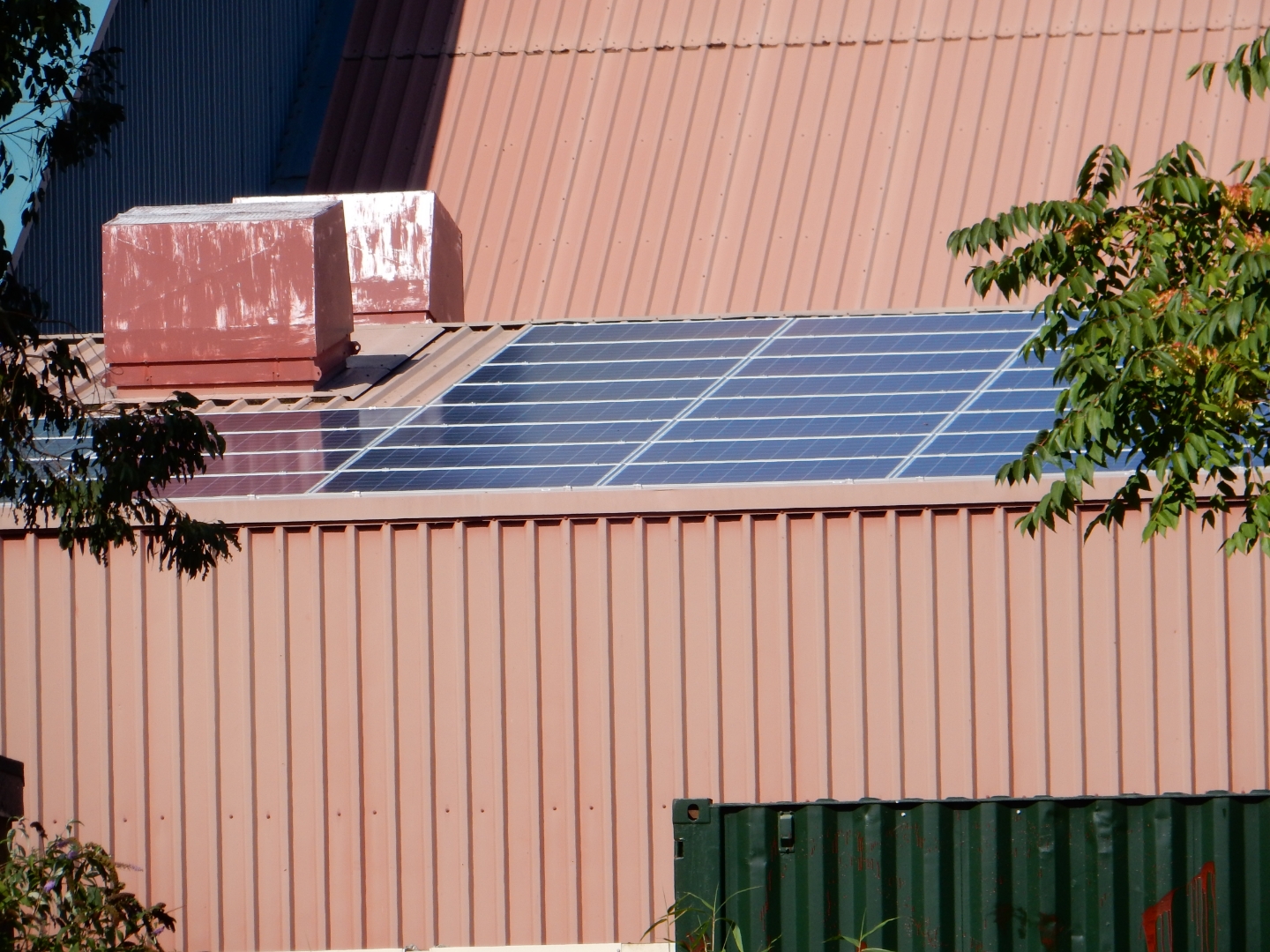 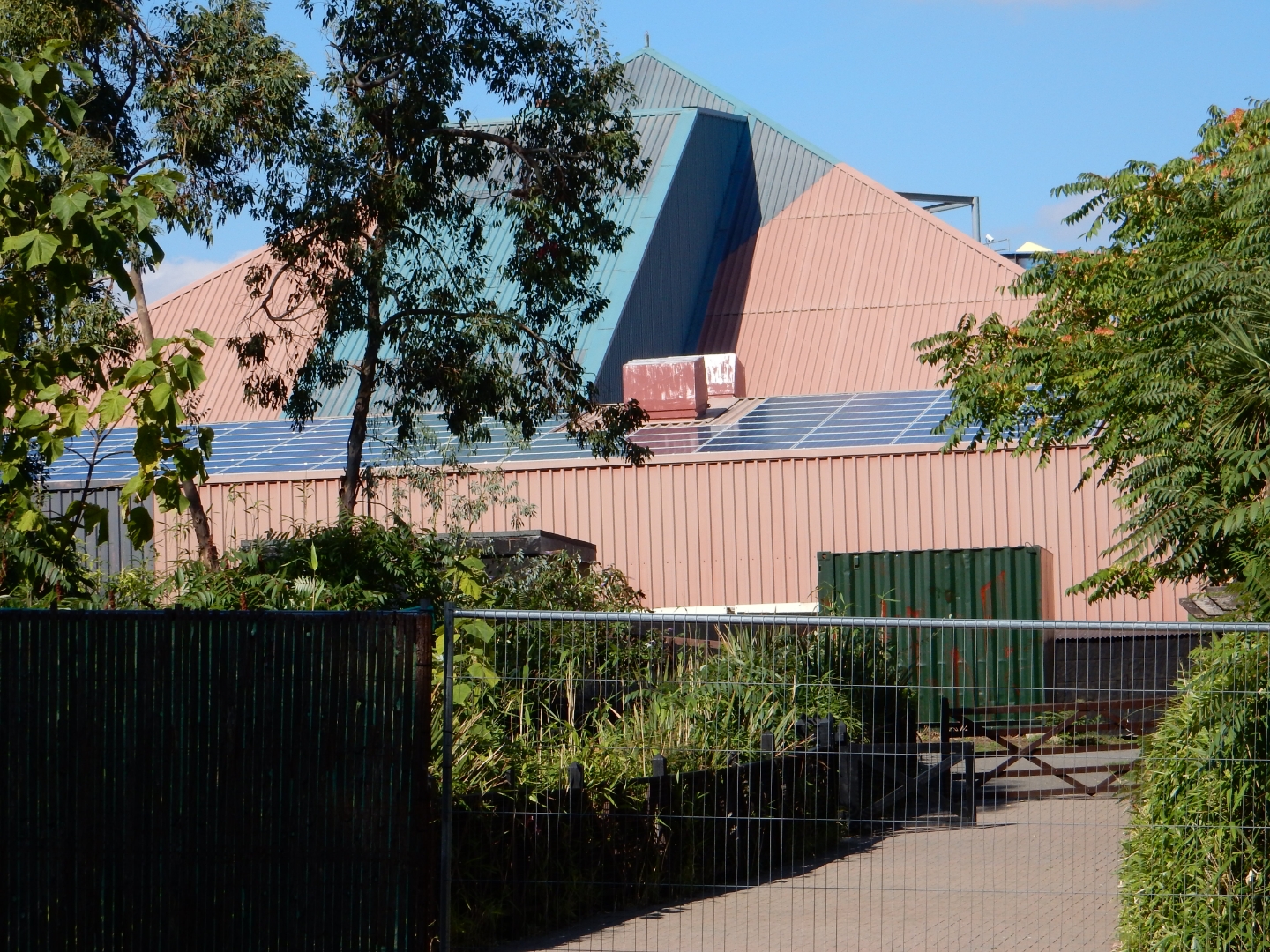 It actually updates the building

I guess the power of screams didn't work out for them then!

Thorpe Park have extended their operating days for the rest of the season. The park will now operate 10am-5pm everyday for the rest of September. Additionally two Thursdays (11th and 18th) in October have been added to Fright Nights.

Great news that the park hasn't had to go to reduced operations in September!