Roughly a month before the season starts and Thorpe have been very quiet about what people should be excited for in 2019. Whilst I'm not expecting much new, it's not Merlin's usual strategy to be quiet and not hype something. This being the same park that just a few months ago hyped Vulkan Peak of Disappointment as being a can't miss experience.

Makes me wonder if they literally have nothing they can advertise, or if they're now being more reserved in their marketing. I would have thought that if they were going down the regular events route, along with it being the parks 40th birthday, that they would have been using that as the selling point. But as of now, silence.

I did notice today that the page teasing 2019 has been removed from their website, which you would only expect them to do after announcing any additions, if they had anything of note to reveal...

I also noticed something in addition. The TP website text showing on the home page tab was showing "THORPE PARK Resort New for 2019!" on Friday, but with no sign of anything new, however as of yesterday evening and at present it has changed now says THORPE PARK Resort An Island Like No Other! with no mention of 2019 at all, which is also a little odd. Seems strange, perhaps as has already been mentioned they maybe don't have anything to reveal after all! See the pic below for what is shown as text in address bar as of this evening.

Hmm, well maybe the website has been prepped for the 2019 build up, starting this week then?

Edit: I suspect the new for 2019 part came from their season pass marketing. Here's one example of it:

New for 2019, unlock access to over 30 thrilling rides and attractions for the 2019 season, PLUS entry to unmissable events all year long. Lock in your season of fun, thrills and laughter now!

Swarm Chris wrote:
Hmm, well maybe the website has been prepped for the 2019 build up, starting this week then?

Potentially so! Maybe I saw something I wasn't supposed to have seen on a test or something!
Well whatever happens hopefully with the 40th Birthday and of course the hints from TP social media on the TP Rangers there are some announcements on the way, they are just keeping us guessing!
Top

Received this email from Merlin marketing, about the new pay-monthly season pass. Maybe this is meant to be just targeting families, but Thorpe seems suspiciously absent from the image. It is only featured as one of the last small logos at the bottom of the email [not shown]. 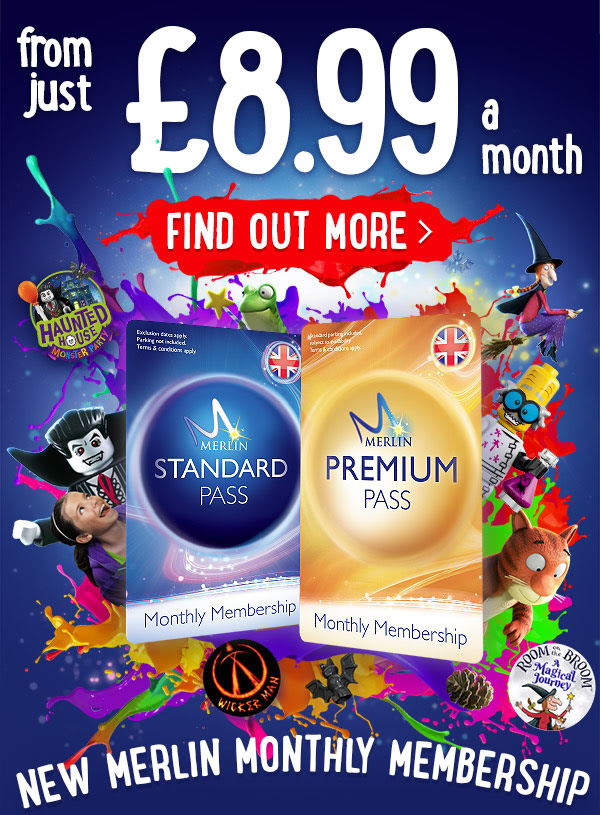 I guess they don't have much to be shouting about! There hasn't been anything new for a while, and as nothing seems to have been announced regarding 2019, perhaps this is mostly publicity for all the new things coming for the season of which it looks like Thorpe isn't included in, with the exception of Wicker Man, but then that was only last year.....so, I guess they didn't give TP a look in as it seems not much going on, either that or they have an announcement coming at some point regarding their 40th birthday etc they are keeping under wraps for now. Well whatever happens hopefully, TP will have something to show for itself given they are 40 after all!
Top

Recently Merlin have distanced themselves from any Thorpe Park branding, as Swarm Chris says, there is no branding for Thorpe in the MAP advert this would be a deliberate decision as in the past they have continued to advertise rides that already opened, so they could have just advertised TWD:TR on the MAP advert if they wanted.

Also worth noting that any mention of Thorpe Park has been avoided at any of the recent financial results. Merlin are actively trying actively distance themselves with association from Thorpe Park as much as they can so I think that they may be looking into either selling the park or at least a major shakeup in some form or another, quite a few of the management at Thorpe such as Divisional and Marketing Directors at Thorpe have been replaced recently.

Whatever happens, I wish Thorpe Park and it's respective management the best as they learn from previous mistakes and improve to become one of the UK's best theme parks.
[Insert Signature Here]

I think my signature says it all.....
Please! No more IP's Thorpe! I'm begging you!
Top

Yes, I just noticed that, had a look at their Twitch account and the background image of their offline page is identical to the HYPD image, just rotated and cropped.
Top

The background is straight from one of HYPD's
event screens.

The company appears to be very new, I believe not even a year old. The channel appears to be based around one person hiring people to stream playing games for £8 an hour, in the hope of turning over half a million within the first year.

Their Twitch page has recently viewed streams with 64 views at the highest, and 2 at the lowest. Sounds like a good match for Thorpe and their selection of relevant IP's...

Edit: Seeing as Morgan hasn't added this yet:

I'm really at a loss with this one. I can't even guess why Thorpe would want to go with this type of IP or partnership. It almost seems like they have either forgotten or are chosing to ignore the fact it's the Resort's 40th birthday - something which could have provided a golden opportunity for events and other things to mark the occasion.

This just seems to be the latest in a line of questionable decisions. This time last year they announced "The Year of The Waking Dead", yet this seemed to just be almost pushed to one side by the time summer came. Then there was Love Island Lates - something completely at odds with the already announced Year of The Walking Dead and seemed like Thorpe were trying to jump on the Love Island bandwagon in an attempt to try and pull people in. Now this HYPD just seems like another attempt to jump on something without really thinking it through. I'm not going to lie - I'm very worried for Thorpe and its future.

Well I'm not 'HYPD'....for it! I know they did Playstation weekend things many years ago, so perhaps this is something equivalent to that?
It is disappointing though, as unless you are into gaming (Which I am not) it really doesn't do much to appeal to a wider audience. It sounds like they are pulling at strings to think of something for this season at the very last minute, which is a great deal of concern.
Top

Of course Thorpe announce a Fortnite tournament as soon as the game dies due to the competition from Apex Legends...
[Insert Signature Here]

Honestly what is the Thorpe management and marketing right now??

Nickolai wrote:
Honestly what is the Thorpe management and marketing right now??

That is a very very good question!
Top

Wish I had something positive to say.

Users browsing this forum: No registered users and 61 guests
×