Legoland Windsor have submitted plans for a new attraction for 2017. The new indoor Ninjago Masterclass attraction will replace Loki's Labyrinth, and will form the centre of a new Ninjago themed area. The new area will mean that the Land of the Vikings will be replaced, and will also see the relocation and re-theme of the Longboat Invader ride, and a re-theme of the Spinning Spider.

The ride itself will be similar to the recently opened Ninjago: The Ride at Legoland Billund which sees riders hit targets using the movement of their hands. The new Ninjago area will also include other interactive elements, including a climbing wall, and play equipment.

Full information on the proposals can be found on SouthParks News

It's good to see the Resort continuing to invest in re-freshing the park and adding another indoor ride. This ride, along with the Haunted House, will mean there are far more options when the weather is poor which can only be a good thing as we know hoe often it rains! Hopefully this application will have a much smoother journey through the planning process too.

I personally enjoyed Loki's Labyrinth, but I got the feeling I was one of the only ones. Nice to see an attempt to keep with the times rather than leaving an area untouched for a quarter of a century (*cough* Katanga Canyon *cough*). We've seen this a lot recently with updates of old areas to Kingdom of the Pharaohs and Heartlake City, alongside edits to Adventure Land when Atlantis was introduced. On each occasion, one new large attraction has been added and other attractions have been re-themed to fit this.

Whilst I can see Longboat Invader and Spinning Spider's changes working, I'm concerned about Viking River Splash. The ride was the major attraction of the old area and has such an excellent theme, but may struggle as a stand-alone attraction. Hopefully the park will find a solution to this problem.

My 6 y/o brother will love this. He's a huge fan of ninjago, and I know that it is one of the more popular themes LEGO do, as it has its own TV show and I've seen people wearing ninjago shirts everywhere. I think it's a great idea.

As posted on SouthParks Facebook, this proposal has now been permitted by the local council.

Rode the one in Billund on Thursday. Great attraction. So much fun, the shooting is tricky but the ride experience will be great for Windsor. Not sure how it'll do capacity wise though.

Why can't this shooting ride replace Lazer Raiders (The park's shooting ride) instead of replacing the hedge maze which, to be honest, more UK parks need.
Top

It's been known since the planning application was submitted, and subsequently approved, that the Ninjago development would see the removal of Loki's Labyrinth and the relocation of Longboat Invader. Just because it hasn't been announced on their site, or on their in park publicity doesn't mean it hasn't been confirmed.

Loki's Labyrinth has now closed in preparation for the construction of the Ninjago development.

Following on from the above, Legoland have now officially acknowledged the addition of the attraction next year.

New update on SouthParks showing the land being cleared and foundations set.

Legoland have issued the following press release about the new area. SouthParks covered most of the details in an article earlier this year, however this latest release has revealed that the development is due to open in May 2017.

MINI NINJAS ASSEMBLE!
LEGO® NINJAGO™ WORLD COMING SOON TO THE LEGOLAND® WINDSOR RESORT
A new awesome world of ninjas is coming to the LEGOLAND® Windsor Resort this spring (May 2017) with the launch of LEGO® NINJAGO™ World, featuring the UK’s first ever 4D, hand gesture enabled ride.

NINJAGO™ The Ride is the first attraction in the UK to use thrilling 4D effects of heat, smoke and wind, alongside state of the art Maestro hand gesture technology, enabling riders to virtually throw fire balls, shock waves, ice and lightning using nothing but their hands, as well as intuitively adapting to each individual’s playing style. This, along with 3D image projection throughout the ride, makes the LEGO® NINJAGO™ World experience feel as real as possible for aspiring young ninjas.

Up to four ninjas can sit in each ride vehicle where their ninja skills will be tested as they score points battling against snake tribes, skeleton ghosts and King of the Skulkuns, before ultimately facing The Great Devourer – a giant serpent who can only be defeated by working together and demonstrating the best Spinjitzu moves.

And of course, a new world means more LEGO models; over 20 new LEGO models can be found in NINJAGO™ World including two five-foot guardian dragons built from 77,280 LEGO bricks protecting the entrance, models of Master Wu and the LEGO NINJAGO™ heroes themselves.

LEGO® NINJAGO™ World opens at the LEGOLAND Windsor Resort in May 2017. For more information visit; http://www.legoland.co.uk/LEGONINJAGOWORLD.

As referred to in the press release, a page has also been added to the resort's website.

So nothing here refers to past rides in the land of the Vikings area. Will they not be themed to ninjago then?
Top

SouthParks News have just posted an update on LEGO® NINJAGO™ World, including some construction photos taken during the Christmas event.

This video shows that the main warehouse looks complete and the temple exterior has had the metal structure put in place https://m.youtube.com/#/watch?v=6FXGCtWTZq8
Top

It appears LEGO: NINJAGO The Ride will be an add-on attraction to the park's Q-BOT system.
Top

It also seems like ride vehicles have arrived on site 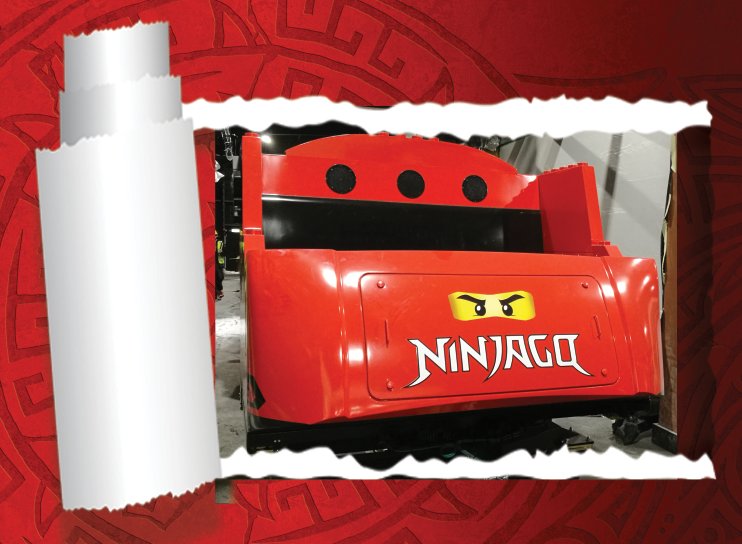 The official opening date is the 26th May and Legoland will be having a 'official launch weekend 26 - 29 May'.

I will be there on opening day.
Looking forward to only my second trip to Legoland now.
BOW TIES ARE COOL!
Top

Ninjago World has opened today, featuring Lego Ninjago: The Ride. Not much has really been done to celebrate, but queues have supposedly been approximately 90 minutes.

I wonder what impact, if any, this will have on Laser Raiders.
Burniel | Great at theme park knowledge, not so great at designing signatures.
Top
Post Reply

Users browsing this forum: No registered users and 3 guests