Just seen news that Funland in London's Trocadero (once home to a second-gen Intamin drop tower, as recently discussed here) has been closed down, in a rather forceful and sad manner:

"Coin-op Community" wrote:
News that the Funland location in the Trocadero Centre in London has closed down has been confirmed by an announcement from the operators, West End Amusements today.

Unfortunately, the business has ceased to trade following the disconnection of the electricity supply by the landlord of the trading premises at the Trocadero Centre, Piccadilly Circus, London. In an effort to ensure the future of the business and save jobs, the directors had attempted to reduce the overheads by trying to renegotiate the lease with the landlord. Despite numerous attempts, it proved unsuccessful leaving the directors with a difficult decision with further trading losses anticipated.

“Unfortunately attempts to negotiate proved unsuccessful both before and after the administration process was started. On July 1, 2011 the rent went into arrears and on July 3, 2011 the landlord disconnected the electricity supply and chained the emergency fire exits closed. An offer to pay for the supply of electricity was made to the landlord in an effort to maintain the operation of the site while negotiations were under way. The offer was rejected resulting in the forced closure of the site by the landlord. It now appears that there is no prospect that the companies can resume trading with the result that 95 jobs will be lost.’”

"...on July 3, 2011 the landlord disconnected the electricity supply and chained the emergency fire exits closed." - I mean, wow :|. I s'ppose that's what happens when your rent goes into arrears, but seems brutal. What a horrible way for such an iconic amusement arcade to die.

Their website makes it seem optimistic that they'll open again, by portraying the closure as temporary:

"Funland" wrote:
Due to unforeseen circumstances Funland is closed at the moment. Our emails and telephones do not work at the moment but as soon as we get everything up and running we will try to answer your messages as soon as we can. Sorry for the inconvenience caused.

I really don't rate their chances of re-openng to be honest, not with landlords as, err, 'understanding' as that. Funland's such an integral part of the Trocadero, I'm truly surprised they weren't more open to negotiation.

I've been planning to go to the Trocadero for ages to look around Funland, but clearly I've missed my chance. That'll teach me for putting things off :sadblink:. 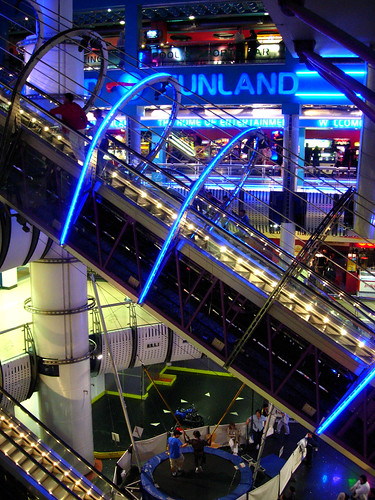 Is this the former Sega thingy?
Top

In fairness, Funland [s:2cbj907p]is[/s:2cbj907p] was a poor shadow of what Sega World used to be. Whereas "back in my day" it was a full on indoor theme park, with a drop tower, dark rides, simulators, and Alien War... when I last went there a month ago, it was little more than a few arcade games, occupying about a quarter of the space it used to in the late 90s.
Last edited by DiogoJ42 on Thu Jul 21, 2011 8:47 am, edited 1 time in total.
Top

Yeah it used to be Saga World, I remember the drop towers as this was the first one I went on and I have hated them since.

I'm hugely surprised it's listed this long in all honesty. I remember going in for years ago and thinking the place hasn't got long left. It's a shame that such a prime location ended up in that state in the first place. In it's current state it was a bit if an embarrassment I felt though, just hope they manage to redevelop it into something worthy of its location.
Top

Same here, called in last October and was shocked at how rundown it was, we only stayed about 10 minutes and most of that was trying to find our way back out! It needs a massive cash injection and new attractions to keep going especially in the competitive London market.
Top

Fair enough, had no idea what state it was in. In which case, knowing that, here's hoping that the Trocadero work to find some other amusement operator who can make good use of the space :)
Top

The whole place has gone to pot recently, even Pasaje del Terror couldn't keep the rent up, it must just be too high to be sustainable for anyone but a massive brand shop (HMV), or just a high costing tourist attraction (Ripley's)...

Recently they started a massive refurbishment of the place and it was improving considerably. This is pretty shocking with that in mind!

I love how on the website they have said, 'we are temporarily closed due to loss of power'

It's not a lie, just not the whole truth :D

I think the long and short of it is Trocadero don't want them. Their plans seem to be to relaunch it as an up-market leisure facility rather than a mass-market entertainment complex.
Top

It is massively saddening to hear this as I enjoyed what remained of the Funland section. And for it to be forcibly closed, electricity ripped by its own landlord and exits chained shut, it is shocking. The place has wasted from what I imagine was before.

And I can't believe it happened 19 days ago either! I was there only the other month with Diogo and Jared.
Top

I've seen this coming for a long time, sega world was absolutely brilliant when I was a kid with all the high tech attractions, it was the first place I played one of those 3D games with the visor :D.

Its been very sad to see it decline over the years of visiting until now when its pretty much pointless really :(. The place needs gutting and restoring to how good sega world was, a big arcade with only half the machines working just isn't exciting enough for the centre of London, Not when there's about 20 better ones down the road from me :p

"shawnoc" wrote:
Yeah it used to be Saga World, I remember the drop towers as this was the first one I went on and I have hated them since.

This is kinda sad news but the place did start to look run down last time I went.

Pensioners on a drop tower?!?

Legoland Discovery Centre and other Merlin branded attractions move in?

Discovery centres are meant to be quite good.
Top

There's still the Namco thing in County Hall, but it's pretty crap.

"SamJ" wrote:
Discovery centres are meant to be quite good.

Until you actually visit one at least.

I think its too close to Legoland Windsor anyway, and all the other Merlin midway attractions can already be found in London so I doubt they'd put anything else in there.

I expect the rent will be renegotiated or a new company will come in. It's a huge building and it wont stay empty for long.

Users browsing this forum: No registered users and 126 guests
×