It would seem so. After doing some digging I've managed to locate the entire press release which quite clearly states that it's an 'inverted wooden coaster'. I've been unable to find exactly what the inversions are so it will be intriguing to see how this coaster develops. Below is the full press release:

2015 is shaping up to be a monumental one for Tayto Park. It opens to the public for its fifth season on Thursday, 26th March and today (Wednesday, 4th February) Tayto Park's founder Ray Coyle unveiled the first look at the rollercoaster that is currently being built in Tayto Park located in Ashbourne, Co. Meath.

As the first ever inverted wooden rollercoaster in Ireland and the largest of it’s kind in Europe, it will boast epic proportions (in it’s category). With over 800,000 kgs of yellow pine wood transported from Southern USA, more than 100 tonnes of steel and collectively over 700,000 nails and bolts, the rollercoaster will reach dizzying heights of 32.05 meters with a stomach churning drop zone of 29 meters. Niamh Reynolds, Tayto Park Marketing Manager said today "We have been taking calls and emails from rollercoaster enthusiasts around the world for months, asking to be on the rollercoaster on the first day. We have even had someone asking to be on the ride on the first day so that he can propose to his girlfriend!"

Rollercoaster builder Jeff Mason and engineer Korey T. Kiepert from The Gravity Group have over 40 years collective experience both designing and constructing some of the worlds most adrenaline fuelled rollercoasters. Between them they have worked on over 73 rollercoasters around the world. Korey said today “We always try to make each ride the best ride possible for its size. When we have the chance to break a record – we go for it! When this ride opens to the public, its overbanked turn will give people a taste of going upside down – a first for a wooden coaster in Europe, so we are pretty excited about this.”

In addition to the rollercoaster, 2015 see’s the arrival of seven extra heart-racing attractions to Tayto Park which will all be up and running for Summer 2015. Taking its cue from world-renowned theme parks, the ‘Air Race’ will set hearts pounding and eyes bulging from March onwards. The Tayto Park ‘Air Race’ is the perfect way for adrenaline junkies to ease their way in to the park clocking up some pulse racing speeds. Next up is the ‘Rotator’, an incredible high speed spinning sensation that is sure to set you back a step or two when attempting to keep a steady stride afterwards. With only four in existence worldwide, this is a one-of-a-kind theme park hotspot for Ireland and the UK. The thrills and spills for little ones continue with the ‘Sky Tower’, a 10 meter vertical climb that will have little ones feeling like they are on top of the world. Other new attractions include a three carriage road train that will transport visitors from one end of the park to the other, a steam train track ride which will operate on a traditional track around Tayto Park and the only 5D cinema in Ireland, screening five and ten minute movies, depending on how much time you have to spare!

Adding to the impressive animal enclosure and perfectly timed with the 2015 release of movie Jurassic World, is the new ‘Dinosaurs Alive’ attraction, a tail thrashing, roaring and clawing exhibition that will delight visitors of all ages in a unique and fun learning experience. This awe-inspiring, life-like animatronic dinosaur spectacular will feature the mighty Tyrannosaurus Rex, Stegosaurus, Apatosaurus, Dilophosaurous, Baryonyx.

Commenting on the rollercoaster and the brand new attractions for 2015, Tayto Park founder Raymond Coyle said “From bigger landscaped car parks to a stunning new admissions building we are aiming to give people the very best experience. We are very proud of the conservation work we continue to do with the animals in Tayto Park and our whole team is very excited about the new attractions not least the rollercoaster. The new attractions and new infrastructure represent a very significant investment of €26 million overall. We believe in Tayto Park and we absolutely believe that it stands alone in Ireland for offering all day entertainment and value".

Anyone for a trip to Ireland? This looks like it could be really good. Can't wait for more updates on this
Top

Some more details about this ride are on RCDB.com. All information has come from their website.
The name of the coaster is Embargoed.
Length: 4,593.2 ft
Height: 105.2 ft
Drop: 95.2 ft
Inversions: 1
Speed: 65.2 mph
Elements: Corkscrew
Capacity: 700 riders per hour
Designer: The Gravity Group, LLC
Cost: Cost of €8.5 million.

There is also some interesting construction pictures on there too.
Top

A corkscrew on a wooden is a worlds first is it not??
I can't believe how cheap it is! Why can't England get one?!?!

Having family near Dublin, this is a great excuse to visit!

Hades 360 got the first, danny

This does look like it will be a brilliant, brilliant coaster!

Ooh, just got an email; family gathering in Ireland at my second cousins place, somewhere near Dublin, or something, end of summer, looks like if my dad wants to see his side of the family ( he probably wants to see my second cousins gig, he's obsessed with their band just because he's related, and thinks their song will hit top of the charts with their best song, which to be honest has got nominated for meteor choice award, but it won't hit the topi don't think at this stage

http://www.choicemusicprize.com/news.html ( it's Riptide movement all works out, you can vote for it somewhere, if you like it) but... It's the last week of summer holidays, so if I do go do you reckon it'll be open? I'll go to Tayto park anyway to see construction and it's a decent place, natural landscaped, more than just rides, I'm a bit excited for this thing..,

http://www.irishtimes.com/news/ireland/irish-news/massive-new-rollercoaster-for-tayto-park-1.2096965 A video which shows a small bit of the construction site and why the park choose to go for a woodie, and more..
Top

Well the name and the train has been revealed. It certainly looks interesting......

It will be called The Cú Chulainn Coaster, named after a legendary mythical Irish hero. 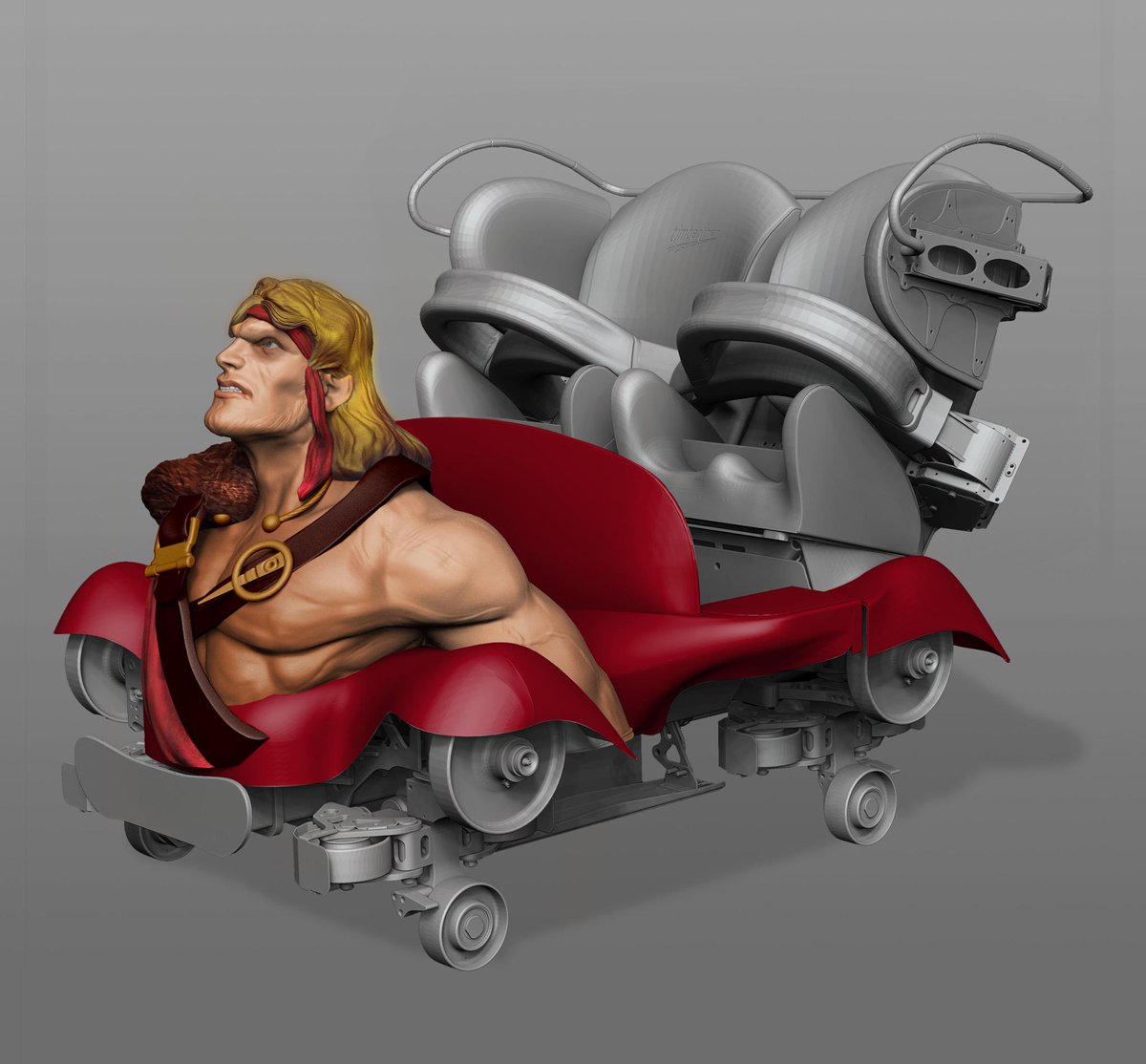 I think that it looks pretty good though.

Wow, I like that train! Much better than a plain one. Obviously the backstory won't mean much to me, but I'm sure the ride will be awesome

A new update posted yesterday on ThemeParks.ie shows some great photos of the construction site, where work seems to be coming along nicely. There's not much height after the first drop which means completing the rest of the circuit will feel fast, there's some nice curves and turns, and I love how the track goes in and out of the support work, I'm sure that'll give good near misses.
Link: http://www.themeparks.ie/europe/tayto/index.htm

Some new pics can be found here. looking epic. really liking the look of the first drop.

Somebody on facebook commented about it being busy, and someone getting stuck upside down on the air race, although I think it's just the hangtime you get on them, it's not very good as lots of people have liked and replied to the comment, thinking it's dangerous and giving it bad press, this is why Chessington didn't like pictures when their rides broke e.g dragons fury last year, they told people not to take pictures, which is understanding as it is bad, but the whole development looks brilliant!

Apparently it is nearing completion, source from TPW Twitter. I've been watching this closely, and it seems there may be some confusion with the 'inversion'. In the layout drawings there doesn't seem to be a corkscrew, but an over banked turn over the station and bottom of the lift hill. But no construction pictures show either elements yet, so I don't know what's going on there :')
Either way I'll be heading to Meath in the future

Lots of new photos of the new wooden coaster have been posted on themeparks.ie website

This coaster is looking pretty good. I'd say ill try to make a trip to ride this!
Top 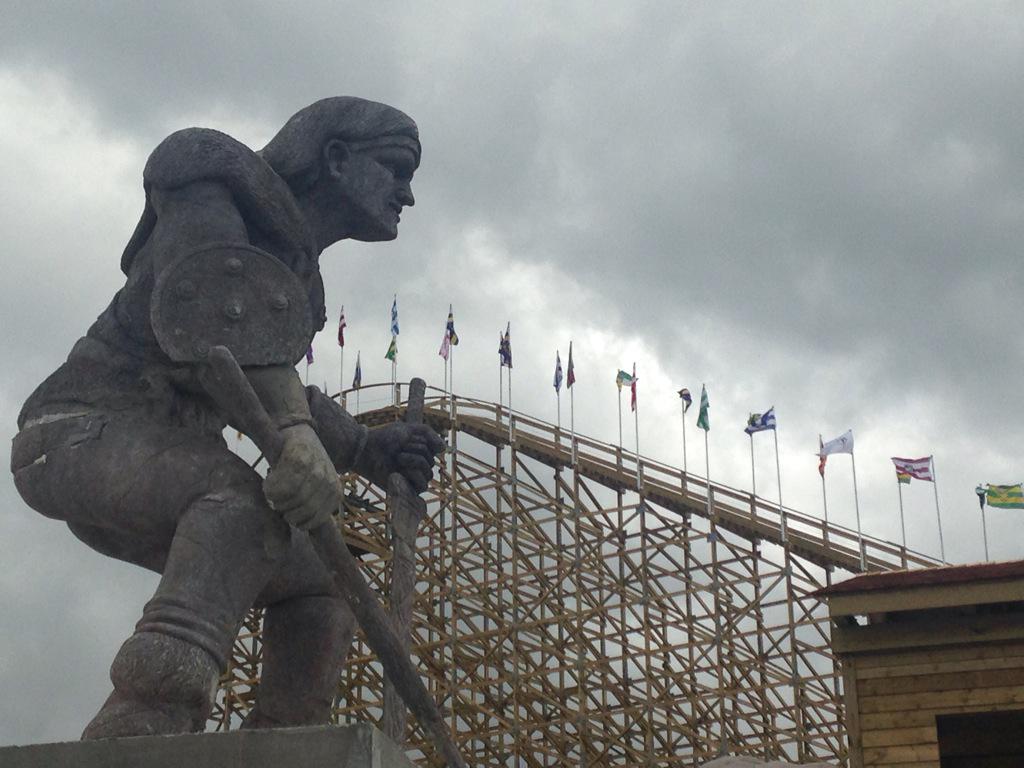 Although I must say I'm disappointed it didn't have a corkscrew like previously stated, that seems a bit of a lousy inversion if it can be classed as one.

DOUBLE EDIT: here's the link to a POV of first riders, omg that guys face

looks like a great coaster, long and fast and full of airtime, but I'm not having that it inverts

TRIPLE EDIT:
Another POV with face front camera shots, as well as off ride and shots from the sky. This looks like it flies round!
http://youtu.be/r9fHMDAN6cc
Top

It looks great it's a shame there isn't more at the park to be honest, a few more thrill rides and a smaller roller coaster would be ideal, although i suppose the zoo and the high ropes and zip wire make up for this. As a bonus, the Ryanair flights are only £19.98 return.

Users browsing this forum: No registered users and 5 guests
×