by theparklifekid
This year over at Ferrari Land, the park will open a new coaster, "Junior Red Force"!

The ride will be a Zamperla 'Speedy' Coaster and will open alongside a new kids area.

by Liam.W
Here's an image of the new children's area on the map! 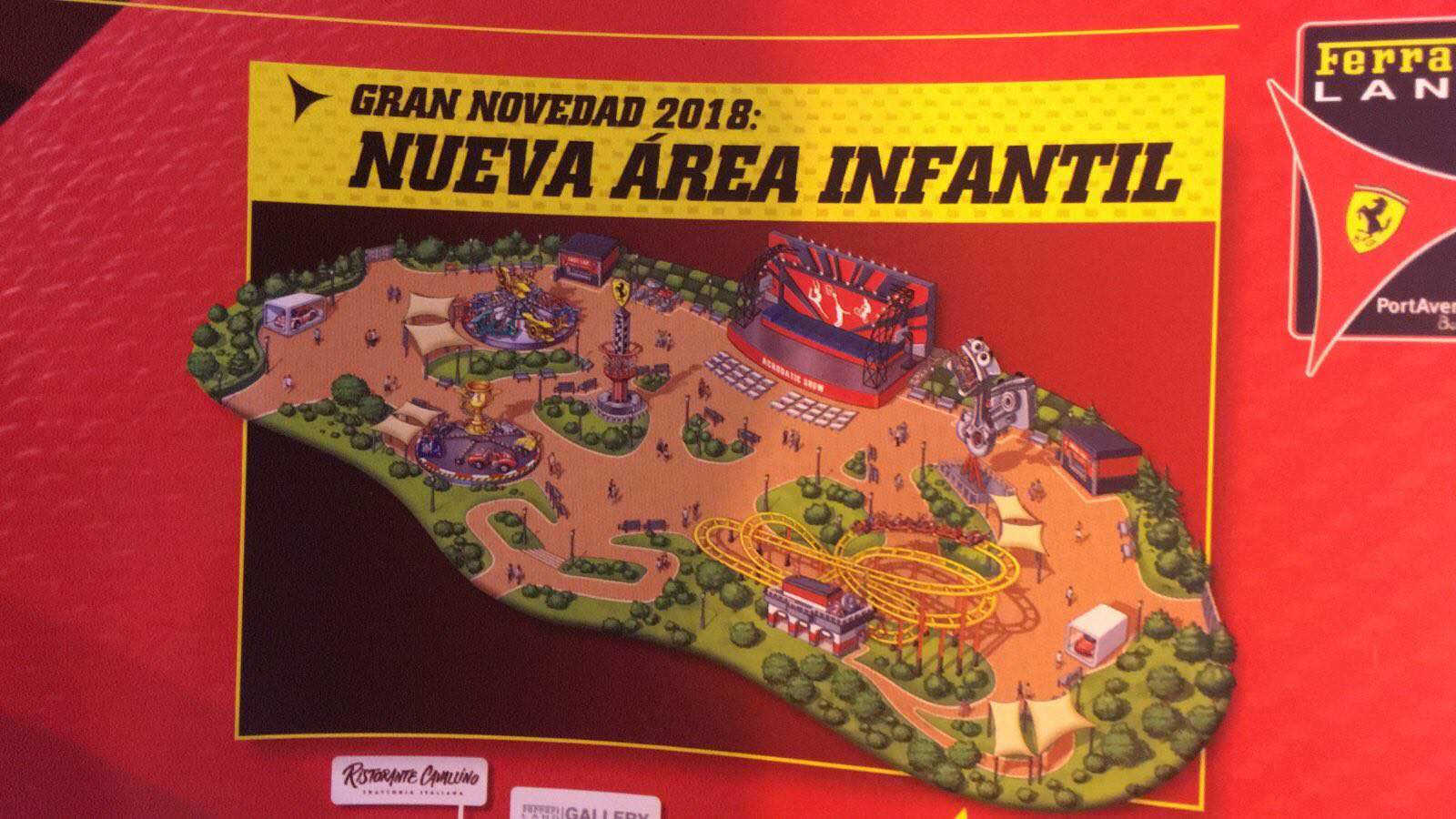 It now makes sense why the area around the acrobat show was large and spacious!!!

by JC13
The childrens area at Ferrari Land has opened today, not heard any opinions yet, but it looks like a decent area. Not sure if Red Force Junior has opened though, as when I was there at the start of April it hadn’t even started being built. There were footers, but no supports or track

by Robert.W
Yep, the website says Junior Red Force is not open at the moment. Everything else is though.

The new attractions are certainly needed, and will likely be pretty popular with kids. I'm not blown away with the new rides though. I mean, they look reasonably well themed, but I think the problem lies in Ferrari Land as an entire park, and even some areas of PortAventura Park itself – they look a bit bland, Ferrari Land especially.

These pictures are from http://wonderworldweb.over-blog.com

by Chris
I think the problem with the park, and the reason why people say it is bland, is due to the Ferrari theme itself.

The park in Abu Dhabi is the same. At least with the Spanish version, they have made a better attempt to install some landmarks from Italy and have some nice landscaping, which is lacking in the original park.

Compared to the lush, incredibly well themed areas of PA, I guess there is only so much can be done when you are basing your park style on a car garage / museum.

by Robert.W
Yes, I agree with that. The theme doesn't really help. The bits that have been themed in Ferrari Land, have been done pretty well. I haven't seen an awful lot of Ferrari World so it's difficult for me to compare.

One other thing I think contributes to the bland feeling is the lack of trees and vegetation. Sure, there are small plants around, a few trees, but overall, it doesn't look as if there is that much. It just makes it look at bit plain. Obviously with the climate in Spain, it may just be a case of waiting until the current trees and vegetation have grown a bit more. I guess we'll just have to wait and see how the park matures.

by Chris
It was built on a car park, so will definitely need some time to mature. 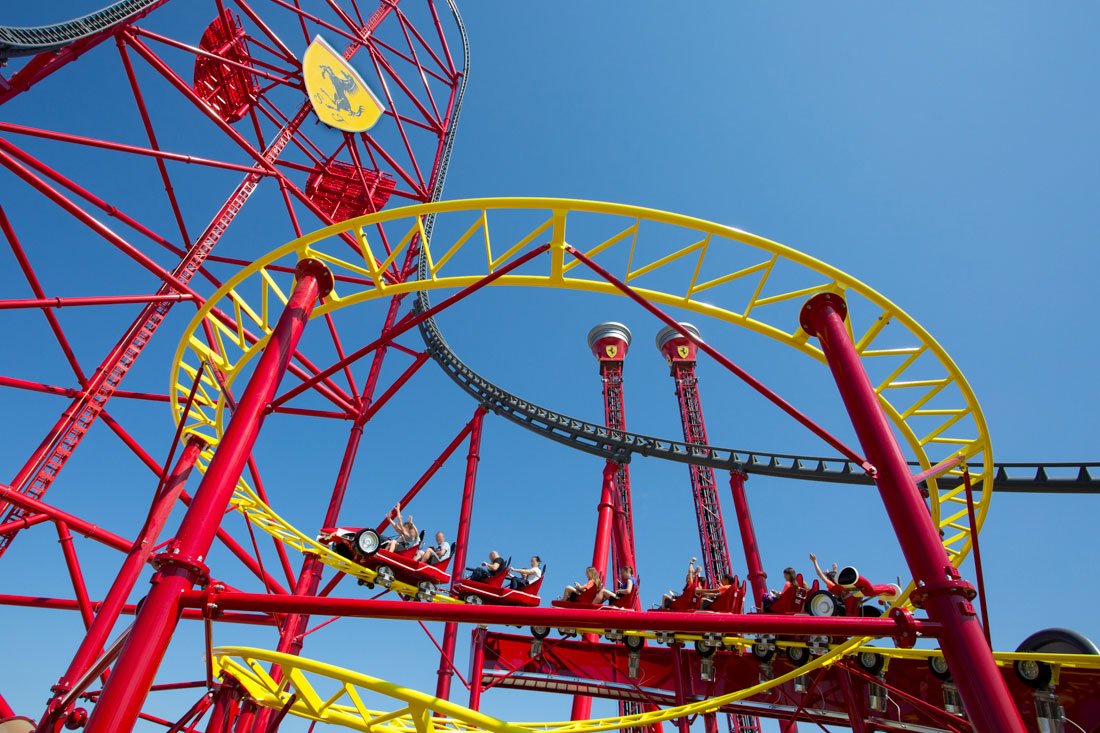 Also announced today was that a new dark ride is to be built in the resort's main park, PortAventura Park. The new dark ride will be located in the SésamoAventura themed area and will feature famous Seasme Street characters. The new ride is reportedly costing €15M, and will open in 2019.

This is certainly a good investment for PortAventura, as the one type of ride that they have been lacking has been a good high quality family dark ride, which I'm sure this new dark ride will be able to fill that gap!

by black_rose2186
The calendar is still not going past December

Anyone know the roundabout opening date after the new year? Can’t wait to get a trip booked up!

black_rose2186 wrote:
The calendar is still not going past December

Anyone know the roundabout opening date after the new year? Can’t wait to get a trip booked up!

You will most likely find that the parks will close for a good 2/3 months, however they are closed quite a few days this year in December, and then January 2019 are closed for a good majority.

So I would assume like previous years they’ll open very late March, early to mid April. Although they have been known to open both parks on Easter.. either way if you book for August the park will definitely be open

by Owen
Hey everyone,

Was just curious if anyone has an approximate thigh size that Shambhala can accommodate up to? I'm heading to PA for the first time next month and if I'm honest I'm deathly afraid I won't get on Shambhala due to how large my thighs are. Having ridden Mako back in 2017 I really want to experience this but I'm starting to worry it'll be a no go from the horror stories I've heard.

To give an idea, The Swarm is quite a tight fit nower days however I can easily get on it without the need for a staff member to squish me in, however Colossus I have had to have the staff member push on the restraint a couple times before the train left the station, but again I got on. Not sure if this gives any indication but hopefully it's enough to get a response!

Went on Street Mission today for the first time, and I was slightly underwhelmed.

Don’t get me wrong, the theming is brilliant, and you do feel rather immersed and the animatronics are fab, but it was just a little ‘bland’. This isn’t like Duel where if you aren’t shooting you still have things around you to look at. This is simply “go into a room, and shoot some cookies on a screen while some characters talk, then go to next scene”.

The second to last scene however made up for this, and suddenly turned into the trackless dark ride like Ratatouille we all know and love with a chase scene, moving ride cars and a full wrap around screen to make you feel fully immersed, and it was brilliant! However that is then short lived and you go to the next scene which just simply shows you the scores (I won yay).

I feel like the advertising for the ride really didn’t help... judging by the adverts you think you’re going on some big, speeding chase around some dark streets, making you think it will be at least a little ‘thrilling’ but you go into the ride and it’s all bright colours and no dark streets at all

I think that was one of the biggest factors in why I was so underwhelmed.

All in all it is a perfect addition for families, and it is very good competitive fun! Just not quite up to the level I was expecting.

Just back from a family holiday at Portaventura World and I have to say what a fantastic resort. We stayed in the Hotel Caribe. Very nice clear hotel with a great beach pool and the food was always to a very good standard every day. Portaventura park itself has a great variety of rides, especially for my 5 year old daughter who is just under 1.2m tall. She loved El Diablo which is the sort of ride I think Alton is really missing from its ride line up at the moment, a Thrilling family ride that bridges the gap between the kids coasters ie octonaughts and the 1.2m rides in thirteen and wickerman. Mission Street was a solid dark ride for kids. Tomahawk was fun for my daughter as well. Amazing log flume and rapids rides, joy of joys dozens of flat rides the enjoy, hint hint Alton. Shambala  probably my new favourite coaster, Dragon Khan is also such a solid ride. Now I'm going to go out on a limb here and say that Furious Baco is a great ride, the restraints are awful and need to be replaced with softer ones but I enjoyed the ride itself. Now on the the shows and they are all absolutely fantastic. I highly recommend that you see as many as you can while you are there as they are top class. Our favourite was Bang Bang West, a hilariously funny stunt show that had us laughing all the way through. Opening times are also really good, hint hint Alton, never below 1900 during our stay. Now on to Ferrari Land, big tip here this park gets rammed in the morning but if you wait it out after about 1300 it dies down dramatically. Red Force is unreal and the 2 simulation rides Flying Dreams and Rivals were solid, the kids rides were good for my daughter except for Red Force Junior. This coaster is just terrible to the point that my daughter did not want to go back on as the jolt on the drop actually hurt her, and she love roller coaster but just did not like that one at all. I do feel that Ferrari Land is still in its infancy and hopefully it will be much better when we next go back in a few years time. I highly recommend that if you can go visit this resort. We had an amazing time and really look forward to going back there in the future.

by darrenhosker
You forgot to mention the hordes of school trips and horrendous queue jumping at PortAventura. Just got back today myself.

It was unbearable to the point I had to buy a fast pass, something I never do. The queues were huge, the operations were as laid back as always, the kids were noisy, the queue lines plagued with huge groups queue jumping. Even when mentioned to the staff, they shrugged and turned away. I was so impressed by the beauty of the park, quality of the rides and the shows as you said were fantastic. Just spoiled by the coach loads of kids. Hooray for the front row fast pass.

Next time I go, I will make sure it's out of season or when the kids are happy in school.

by Wortho
Yes queue jumping was hurrendous but I think that's more down to the cattle pen, low fence set up of the queue lines. Odds are if Alton had queue lines like that there would be a lot more of it going on and while there was a lot of school trips there I never really found tem too bad. The older ones were but with going with a 5 year old we generally found the rides she could go on were fine queue wise. For the big rides we used the single rider where we could which for Shambala was near enough walk on even with a 90 min main queue.

by Gavinr
this is quite the video from onboard Shambhala!

Gavinr wrote:
this is quite the video from onboard Shambhala!

Fair play, that lads got skills
All times are UTC
Page 49 of 49
Powered by phpBB® Forum Software © phpBB Limited
https://www.phpbb.com/