Here are some further details, which, for some reason, only appear on the German version of the minisite so you'll have to cope with Google's translation:

Also, here is a selection of photos from the minisite's construction blog:

A large crane has now been erected on site, suggesting vertical construction is eminent 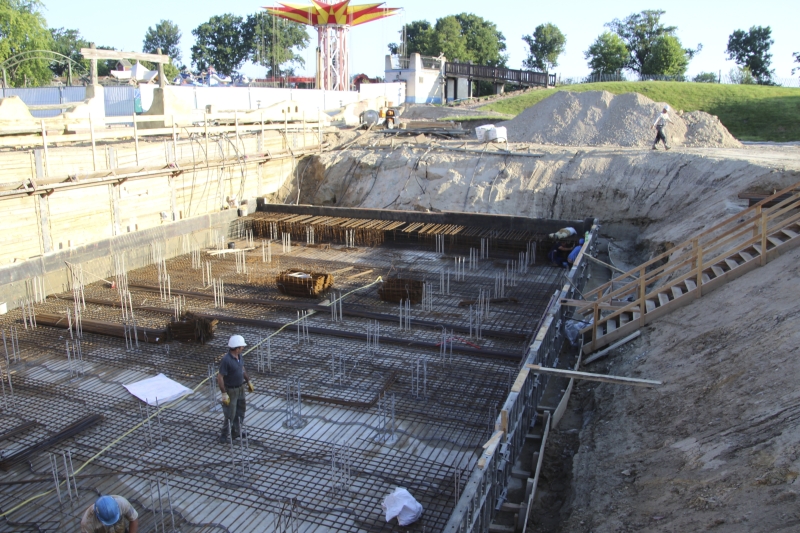 CoasterForce have uploaded this video, which provides a good overview of the site in its current state and also a reminder of how big this project actually is.

The 79m high tower is currently being constructed out of concrete, as shown in the following image from the Construction Blog. 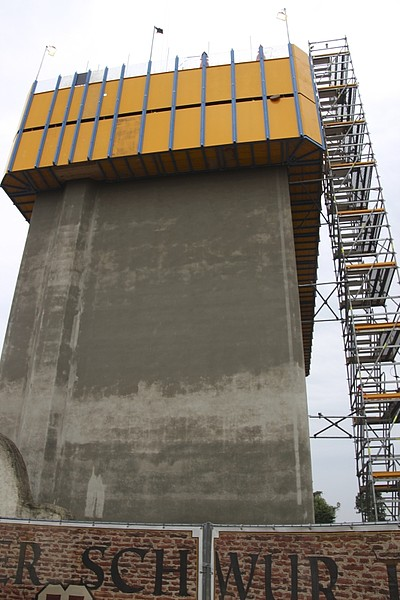 You can also follow construction on the park's webcam, however it is constantly moving and the tower only appears in the bottom left corner in one of the positions; as shown in the still image below. 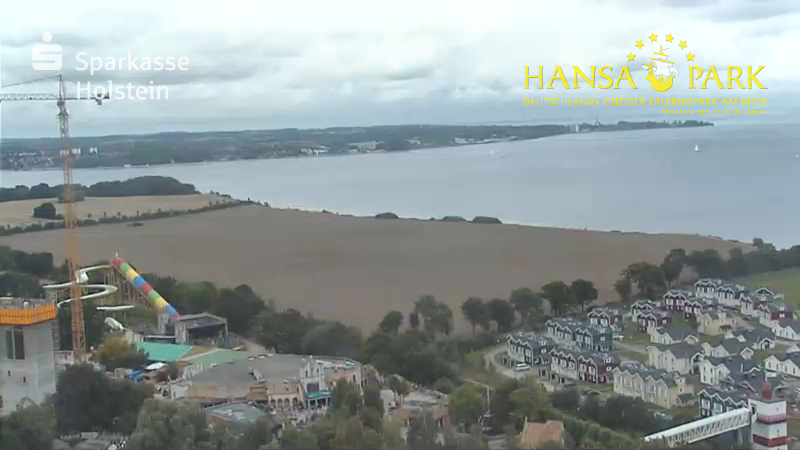 This is starting to look good

Can't wait for this to be finished!
Top 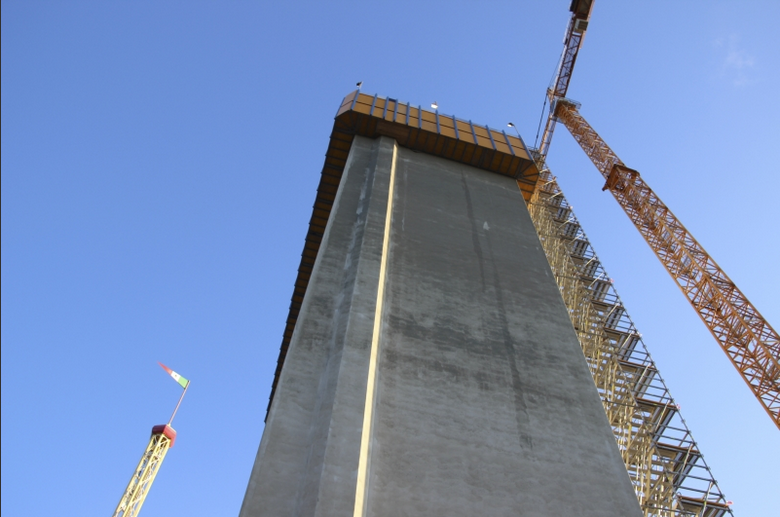 What even is this tower for?!
Top

The coaster's main vertical lift hill is situated either inside or outside of this building, either way it goes to it's peak height, enters the tower, where the rumours say it will have a freefall element like th13teen. From there it will go around the rest of the course. It'd be an (almost) cheating way of branding it as a hypercoaster.
Top

The tower will be 79m high, which is about 260 feet. I believe the lift hill will be inside.

A late night search has found many exciting things!

First is a new concept image, which I believe was taken from the park's newsletter by Hapa Forum - the TowersTimes equivalent for Hansa Park. The track looks quite similar in colour to that of Colossus' and there is also some of Gerstlauer's crazy support-work shown too. 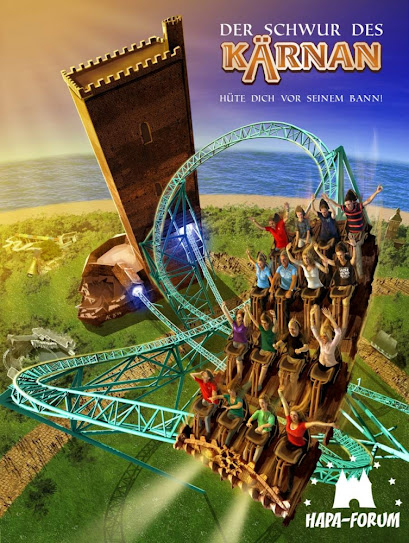 What I've also come across is the layout for the ride (alongside the rest of the park). I've also gone to the liberty of enlarging the actual layout for you, but you'll find the original image here. It certainly looks like it's going to be an interesting take on the hyper coaster, with the layout including some sort of non-inverting sea serpent roll - shown in the concept image. 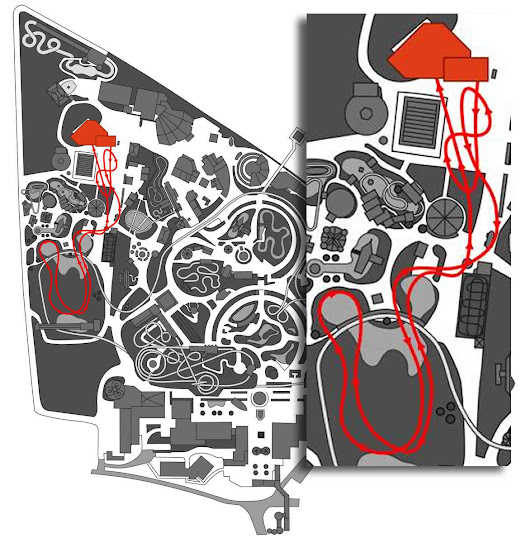 Finally, here's an update on the massive cement tower, which has yet again increased in height. I think that it might be one of the tallest structures ever built to house a rollercoaster. 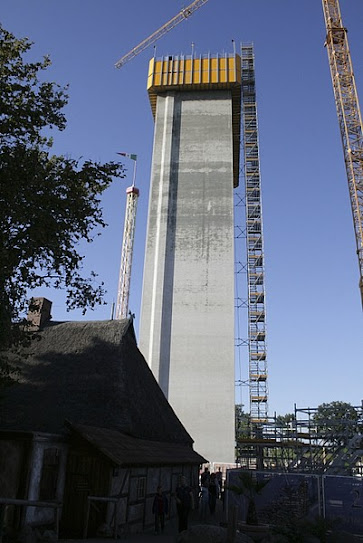 That is going to have a huge track length. This really does look as I'd it will be a world class ride!! And there is dark ride sections before and after the main coaster section!

Looking at that I'd say a minimum of 6 inversions as well! A nice number as it also features freefall, has a nice height for drop and dark ride aspects. I look forward to following this construction!
Top

If it's a true hyper, it won't have any inversions. Also, the freefall element was just speculation.

This coaster sounds very similar to Cannibal at lagoon. That is a new hyper with a vertical lift and a dark section.
Top

It is remarkably similar, yet Cannibal is being produced almost entirely in-house by Lagoon Amusement Park. But it will also feature multiple inversions and some form of secret element, as well as a massive tower.

Daily tower update - it has now reached 61 metres in height and is expected to reach its maximum height in the next few days. Here are a few of the latest images. 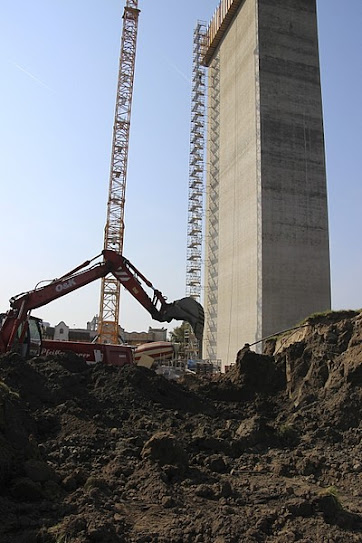 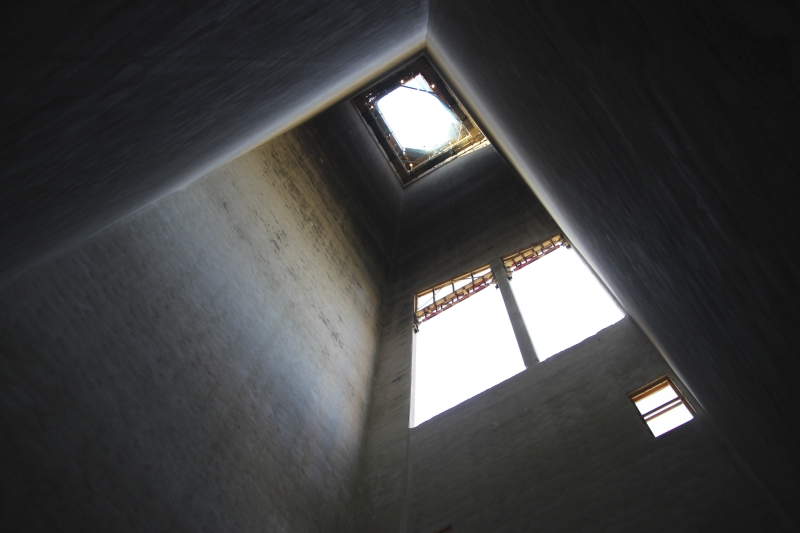 A few new (translated) facts from the minisite:

Also here's a screenshot from the webcam, which puts into perspective how tall the tower is!

I know its still early days, but that tower looks like it may be an eyesore
Top

Having been to Hansa Park earlier this year,it is a really beautiful park so I trust them to make the tower look fantastic.
The theming on Fluch von Novgorod was absolutely fantastic,up there with some of the Disney/Universal quality IMO
Top
Post Reply

Users browsing this forum: No registered users and 98 guests
×