Energylandia just will not stop! Now the park have announced / put permission in for 3 new major coasters before 2020!

Mine Train
First is a mine Train attraction featuring a maximum of 3 lifts, a maximum height of 15m and a track length at a of approximately 1200m.

Inverted Multi-Launch Coaster
This attraction will have a track length of around 1000M, a height of 35M, 5 inversions and a top speed of around 60MPH!

Then finally the big one...

RMC I-Box
The park are also looking to add a beast of an RMC. Standing at a maximum of 60 meters (making it another ‘hyper RMC’ after Steel Vengeance) and featuring 3 inversions this thing will be awesome! A top speed of around 70mph is also expected with the track being around 1300m long!

Not only this, but the park have also filed for funding to build a “innovative Tilt Coaster”!

This park is seriously getting some insane attractions now, and I cannot wait to see what’s next...

These expansions certainly sound exciting! Have they given any rough dates other than 2020? If that's the case we could see two per year

All expansions are anticipated between now and 2020 other then the tilt coaster which is yet to be approved!

Lots more information has risen up around the park's 2018 Hyper Coaster in the past couple of weeks!

Firstly, we have the coaster's name: Hyperion! I personally think this is a pretty cool name, and it's great to be able to call it by its full name instead of just "that big hyper".

Next up, the park have done a huge update on the coaster's theme and design on their Facebook page. Here is a (very rough) translation of today's information:

The Cosmonauts team is going on a research mission to the distant moon of Saturn. Somewhere in a remote space, the "Hyperion _ 1" ship encounters a black hole and is suddenly drawn into a wormhole. The crew after being time travel reveals a completely different universe and a new, twin to earth planet called hyper novi...
Curious what happens next?
In 2018, this science fiction is going to happen to EnergyLandia thanks to the investment of mega coaster hyperion.
This device we into space of sensations and sensations, we will take you on a remarkable journey into the world of the future, both in terms of feeling and tematyzacji.
From the entrance to the station you will be drawn into space, which will create unique design and special architectural solutions. Detail Tematyzacja will also include ubiquitous media and computer simulations.
Our Ultra-modern hyperion ship is going to cross all possible speed records, altitude, extremities and time limits, setting absolutely extraterrestrial standards!
Due to the launch of the hyperion, a special, film in the history of the parallel world will be created.
The experience will be spectacular and there will be a lot of them, because our hyperion has she a lot of innovative and innovative solutions; among other things, the tunnel, the water effects, the unexpected gravitational effects during a number of returns at the giant size
Hyperion's investment is a powerful project which, apart from the involvement of the vast area, is mobilising giant resources and human capital, putting entertainment at the highest world level. It is worth mentioning that hyperion will be absolutely the only one of its kind - created by the company of Intamin Amusement Rides, on our order, with a unique design, which, among other extreme devices, will be an explosion of sensations and an absolute adventure
The construction of hyperion has already begun - the final work is planned for season 2018!

The park also posted some promotional and concept art, including this one of the station: Looks like the park is putting the effort into creating a space/sci-fi theme for Hyperion, which is really good to see!

Hyperion has now been topped off. I really want to try and get to this park this year. 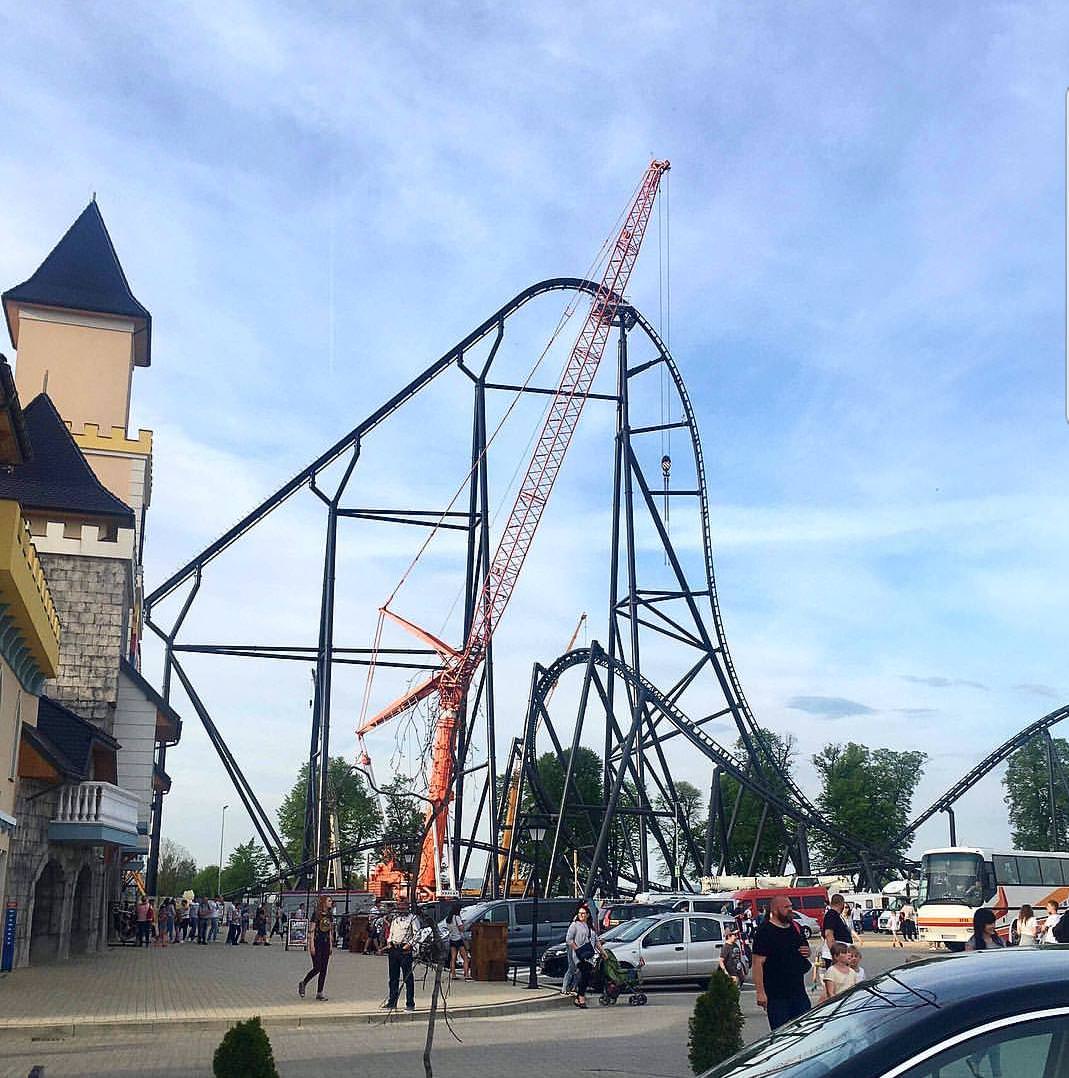 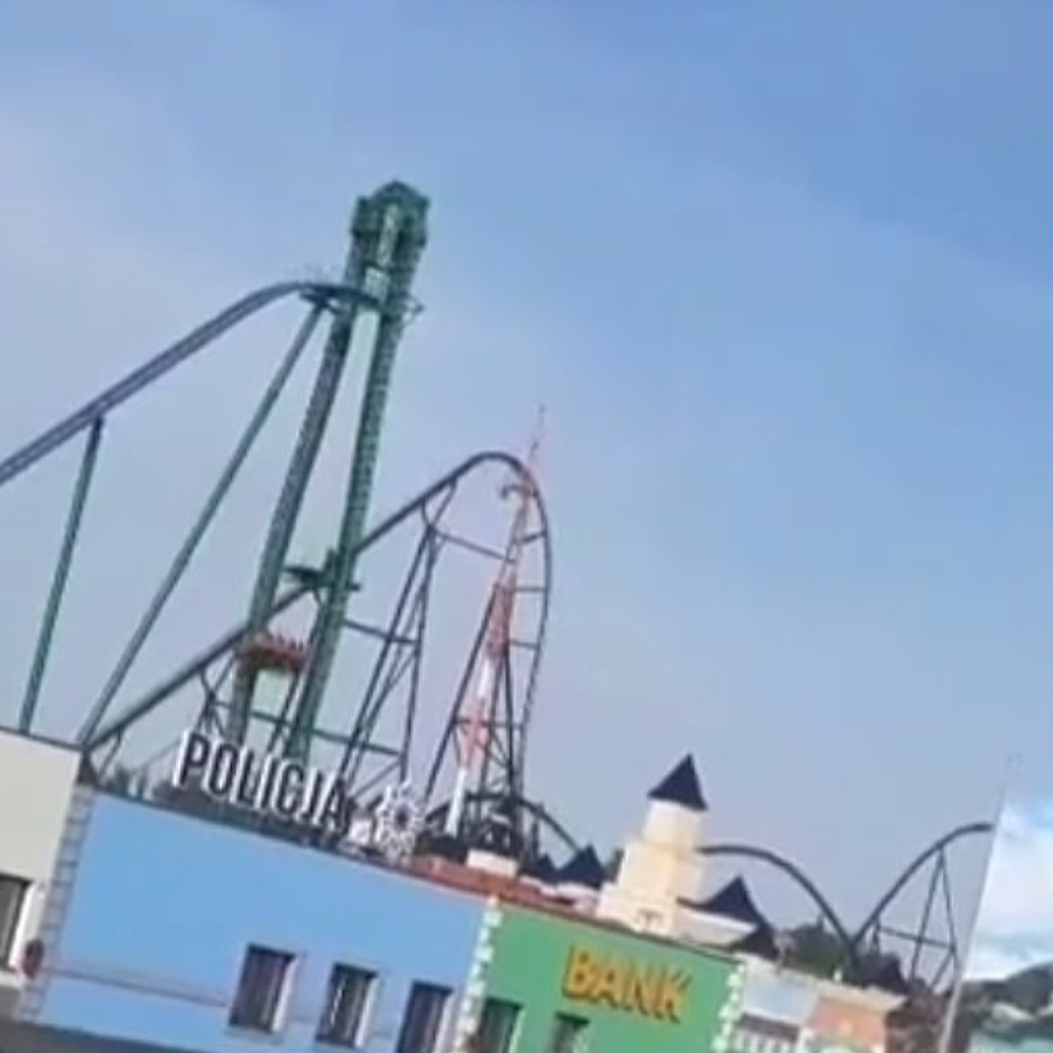 A nice picture of the first drop from the front of the boat. 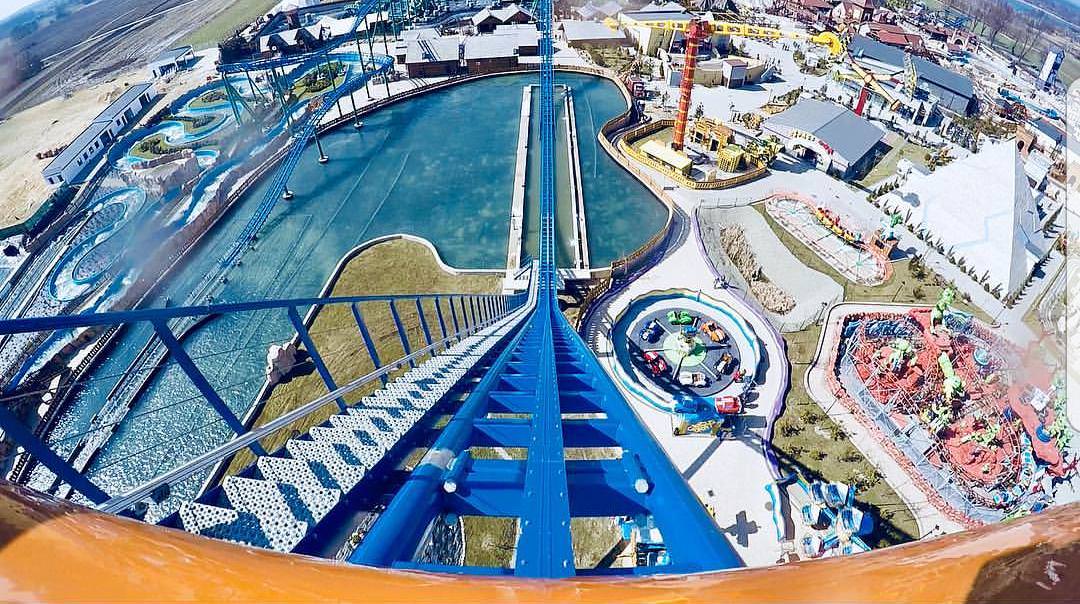 I'm not sure who to credit for the images. They have been shared on so many accounts, not sure who the original poster was.
Last edited by Dan on Mon Apr 30, 2018 11:52 am, edited 1 time in total.
Reason: Fixed image links
Gentlemen, start your engines !!
Top

This park just gets more and more crazy. It looks like they are getting a duel launch coaster as well as an RMC for the 2020 season:

Where on earth are they getting all this money from???

I have no idea. But the stats for the RMC put it just short of Steel Vengeance for height and speed. There will only be 8ft height and 3mph speed difference between the two of them.

When they both open, it will put the parks coaster count up to 14 coasters in 6 years. That's nuts !
Gentlemen, start your engines !!
Top

Most of the money is coming from EU grants and loans. As Poland is quite poor (compared to other parts of Europe) they are trying to encourage tourism, in this case with Theme Parks. I don't think there were any large scale ones preexisting.

Surprised they are going with an RMC, I would have assumed they were using European manufacturers exclusively (I know that RMC is represented by Vekoma so I guess it's technically a Vekoma rather than an RMC?)
Top

Hyperion's track is nearly complete. A fly over video has been put onto YouTube and it looks amazing:

A Speed POV has now also been uploaded onto Youtube:

Interesting to see they are using a chain lift instead of a cable lift. I thought at first it might have something to do with the cars being 4 seats wide, but then remembered Skyrish uses a cable lift and has similar cars.

I'm seriously thinking about booking flights to Poland after seeing this

The first official POV is up and it looks stunning. Amazing pacing, the little pops of airtime between the elements should also be great, as Intamin are legends when it comes to airtime on their hypercoasters.

The lift hill does seem a little on the slow side though Hopefully that will get sped up a little before opening.
Gentlemen, start your engines !!
Top

It looks bloody awesome. Energylandia have really been spending the money in recent years on their park and it’s they have really become a park that many enthusiasts want to visit .
Top

According to Looopings on Twitter, there has been some sort of accident on Energylandia's new Hyperion rollercoaster, which only just opened earlier this year.

Looopings wrote:
According to several eyewitnesses, a serious accident occurred at the Mega Coaster Hyperion in the Polish amusement park #Energylandia. Details are still missing.

I can't find any more information at the moment, but fingers crossed that this isn't too serious and that everyone will be okay.

It's been confirmed that a 37 year old park employee has been killed whilst he was attempting to retrieve a mobile phone. Below is a rough translation from a local news site:

- At. 20.30 one of the employees of Energyland saw that one of the guests had a mobile phone. He wanted to pick him up and then one of the wagons hit him - informs Małgorzata Jurecka, a press officer of the Poviat Police Headquarters in Oświęcim. - 37-year-old resident of the Czernichów commune died on the spot - he adds. Police and prosecutor work on the site of the tragic incident.

There aren't any more details at this stage, but there are bound to be lots of questions surrounding just how this tragic event could have happened.

Wirtualna Polska are reporting the following (via Google Translate):

The tragic accident occurred on Thursday, August 16, around 20:30. According to the police, the service technician bent over a mobile phone lying under the Hyperion roller coaster, which was probably lost by someone. He did not notice the oncoming carriage and was hit on the head.

First and foremost, thoughts have to be with the family of the employee. It's an awful thing to have happened.

I expect Hyperion will be closed for at least a short while to allow for investigations to take place. The first thought that came into my mind was how was an amployee allowed into the ride area without the ride being shut down? Or why did the employee decide to go to retrieve the phone before checking the ride was shut down and safe? One report I've seen suggests the employee was unaware of the oncoming train - does that imply something about the employee's ability to assess and manage risk?

I'm sure a full investigation will be carried out and any questions answered. It's just horrifying to think that this coud even happen

Saddened to hear about the death of the park employee.

Thoughts with family and friends.

Apparently there is a video (I haven't seen it) from earlier this year of an Energylandia employee entering a ride area whilst the ride was still in operation to retrieve someones lost property. It'd be worrying if this happened to be a regular practice, as it most definitely isn't safe as this horrific incident has unfortunately demonstrated. I imagine there will be some pretty serious questions about the park's operational safety procedures that will need answered.

Construction of Zadra, the new RMC, has suffered damage caused by high winds overnight. Reported by Gazeta Krakowska, based on a video posted on Twitter, with translation via Google Translate:

During the night from Sunday to Monday in the amusement park near Zator (Oświęcim county) the wind caused damage.

As reported on Twitter, one of the readers, a resident of Andrychów, the wind overturned the wooden structure of the roller coaster in Energylandia.

There is no information that anyone will be harmed. Losses, however, do not look large, it is most likely about construction elements on the construction site.

The wind was blowing roofs, roof tiles and chimneys, turning trees on roads and cars. There are also damaged power lines, there can be up to a thousand people without electricity in our region. The current was missing even for a moment even at the hospital in Wadowice. Firefighters accepted hundreds of applications. 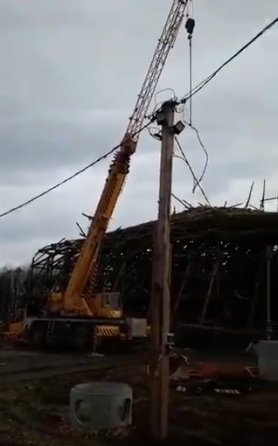 Edit: Some additional photos from the Gazeta Krakowska article. 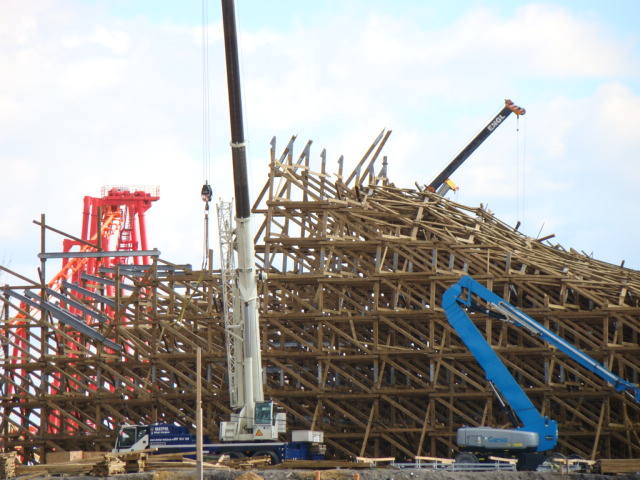 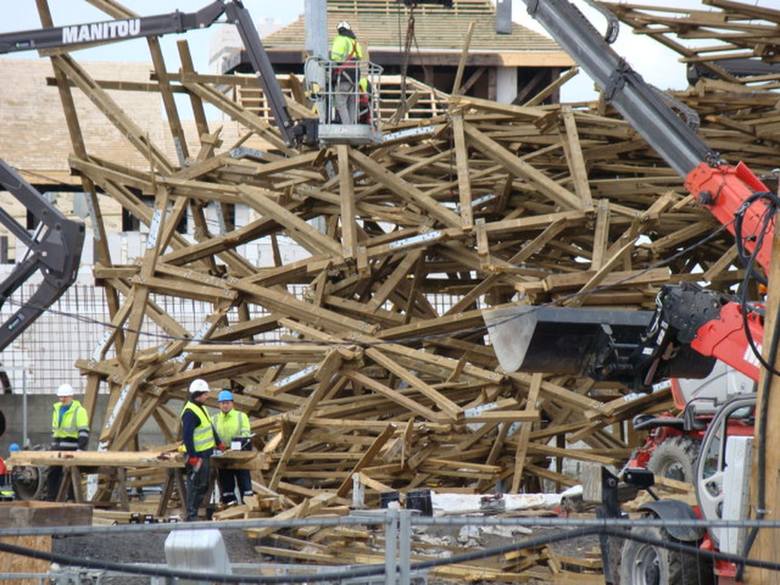 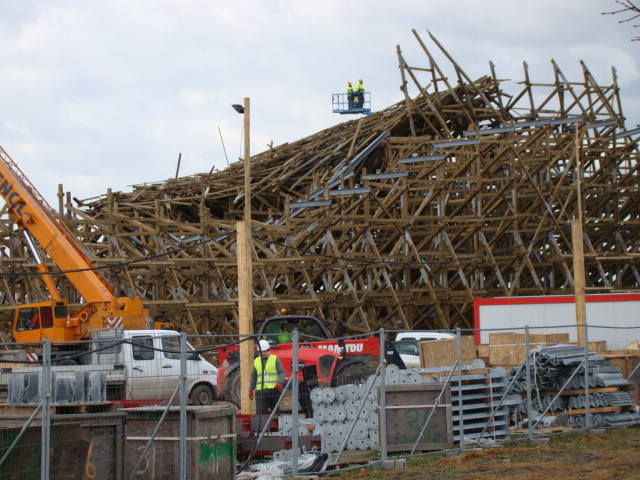 Hopefully this won’t result in too much of a delay to the project.

Users browsing this forum: No registered users and 21 guests
×