Just saw this on Sweden's 'The Local' English news site.

How awful - but how stupid too. This is the 4th major water ride accident in recent times that I know of.

Hydro, Oakwood = Fatality after girl falls from car on drop

Poseidon, Europa Park = Fatality after man breaks out of car and plunges to his death

Rapids, Asterix = Fatality after child is swept through current having fallen from boat

Stumbled across this whilst browsing the net, come 2011 Europe will have a new tallest ride... An Intamin Giant Drop standing 116 Meters (380ft) at Liseberg in sweden! The New ride will replace the parks current observation ride, The Liseberg Tower.

Liseberg Tower, with a height of 146 meters above sea level, will be converted into Europe's highest free-fall attraction. The name of the new attraction will be AtmosFear.

AtmosFear will be Europe's tallest free-fall, both in terms of vertical drop and the building supporting it. Over the whole world there is really only one attraction that resembles AtmosFear and it is located in Australia.

The ride starts in the basement in the tower complex and from there to the summit takes about 100 seconds. The journey down will go a lot faster - you will be free falling just over three seconds. With speeds of around 110 km/h passenger fall to the ground and the brakes will not start until you reach the basement. During deceleration the riders will be expose of the maximum allowed force, 4 G.

- AtmosFear is nothing for those who are carefully inclined. It will be the most awesome attraction at Liseberg, said Mats Wedin, CEO of Liseberg.

Liseberg Tower, which opened in 1990, after 20 years has made itself as comfortable vantage point. Now, the protective car is removed and replaced with chairs and harnesses. Passengers will sit openly with their legs freely when they fall. The manufacturer of AtmosFear is the well known attraction manufacturers Intamin, which is the company behind rides like Balder, Kållerado and Kanonen at Liseberg.

Since the construction will begin on Monday, will mean that Lisebergstornet closes to the public after the weekend. Until then it will be free to ride for anyone who wants to. All activities in the tower lobby and the 3D movie "Sammy's adventure" will run as usual throughout the season.

AtmosFear will première spring of 2011.

I actually HATE drop towers, but I always find the overwhelming urge to ride them whenever I see them, but then wish I hadn't bothered.

Highest I have done is apocalypse at DMP

"Kryn" wrote:
...I actually HATE drop towers, but I always find the overwhelming urge to ride them whenever I see them, but then wish I hadn't bothered.

Highest I have done is apocalypse at DMP...

I was starting to think I was the only one, now that Gloomy has defected to the other side! :P

I don't get an urge to ride them though. And it was Apocalypse that put me off them!

Even for those who don't ride them, this is a pretty impressive ride.
Top

Drop towers are pretty much the only rides that scare me, but I still love them at that one looks absolutely amazing. Really hope I get a chance to ride that at some point, Liseberg is really rising up my list of parks to visit.
Top

"DiogoJ42" wrote:
I was starting to think I was the only one, now that Gloomy has defected to the other side! :P

Hmmm. Extremis, a relatively tinchy S&S double shot tower (no real drop) and Tower of Terror do not a drop tower fan make. You wouldn't get me on this thing in a million years. Intamin Towers are just so intimidating and grim looking.

I think I could manage Apocalypse at a push, but that remains to be seen. If our planned trip to Madrid goes ahead as planned in July, I will be forced to face up to a moderate sized Intamin tower and also a massive S&S tower - Riddler's Revenge at Parque Warner (apparently 6th highest tower ride in the world according to one forum I stumbled across).

But back on topic - this is mighty impressive, but not my cup of tea.
[size=90]For some things there is no rational explanation. There is no way out. There is no happy ending to this story. Welcome to the unknown. Welcome to eternal darkness.

Well, this was unexpected. Lisberg already has two relatively short drop towers (one launches up and the other is a classic drop) and I’m surprised there converting their old observation tower. Having been in the Liseberg Tower I have some excellent pictures from the park and it's a great view of the city. So I’m not sure where I stand with this conversion.

I’m not at all keen on drop towers:
Th13teen and frog hoppers are fun :P .
Extremis is manageable.
Detonator (like the other Lisberg Towers) I have avoided.
Apocalypse size towers, I have only ridden with other people and share the same view on them as Kryn, Diogo and Gloomy Dude. The overriding feeling of panic in the first few seconds is something I just can't stand but that’s just my opinion.

On the other hand the tower will work well with the rest of the park and for anyone that likes drop towers it will be an excellent experience. The actual tower base is built on the top of the hill with two giant escalators leading up to it so the drop won't actually be as large as it looks.

The Advert and concept art also looks rather impressive, especially as the station won't require much modification.

Drop towers do nothing for me to be honest niether do spinners ! Roller coasters for me 8)
Top

Posts: 4287
Joined: March 2007
Location: Curled up in Nemmies claws. Sound asleep and purring like a kitten.

That has me salavating massively! :shock:

I think a ferry trip is needed next year. :twisted:

Now how good would it be if were actually that tall? :P
UK Park News - Your Dedicated Theme Park Resource
http://www.ukparknews.co.uk
Top

Looks good. Theming looks to be an Apocalypse/Oblivion rip off, but meh, if it's good it's good.

My only problem with stupidly tall tower rides is the hight makes them pointless. After a certain point, the drop is no longer thrilling or scary, you just sit there and wait for the brakes, because the thrill has worn off. Towers like Apocalypse have the perfect size to thrill and terrify all the way down. I don't know what the point is, but I feel we are not far from reaching it.

My only problem with stupidly tall tower rides is the hight makes them pointless. After a certain point, the drop is no longer thrilling or scary, you just sit there and wait for the brakes, because the thrill has worn off.

I reckon the taller drop towers are just as good as smaller ones - I've done some of the biggest - the Giant Drop in Australia and Scream at Heide Park - both fantastic rides and gave great views too!

I also like the look of this - another reason why I'll have to plan a trip Liseberg (apart from Balder :D)

I have only been on detonator and, as small as it is, I absolutely pooped myself! :P When it dropped my whole body tensed up till the bottom, such an odd experience. But it doesn't mean I wouldn't ride again and I'd certainly give this a go.

And I sort of agree with Blaze on the fear issue on a long drop. I do think that it won't be as scary after a point, but I like that idea. It would be like "aaaarrrrrhhhhggg!" then "Ahhhhh :)" If that makes any sense.

Ice blast thrills me on the way up due to shock, then I love the decent 'cause it just feels so graceful. Sort of, damn scary and relaxing rolled into one ride.

On this new ride I think I'd crap myself as the 'car' is let go, then just enjoy the rest of the drop.

I do like most drop towers even though they do make me a bit anxious. (I still get that slight tinge of fear every time I ride Detonator.) The theming looks incredible as well, I hope Liseberg can get it just as amazing as that concept art.

So now there's a huge drop tower, what's renowned as Europe's best woodie, a Screamin' Swing, Lisebergbanan, I must really get my arse to Liseberg sometime. :lol:

Sorry about bringing this topic back from the dead, but Atmosfear actually opened about a month ago. Having REALLY enjoyed Scream at Heide Park, I think I would absolutely love this, the drop looks incredible. Is quite weird how it doesn't spin like Scream does, apparently they thought it would be more re-rideable, as people would want to try different sides for the different views! Off ride video here.

What with this, Balder, Lisebergbanan and Kanonen, I seriously have to get to Gothenburg soon! And Stockholm for that matter...

Thanks Mattmash, completely forgot about this.

Not sure I agree with the re-ride thing. There's some fantastic views of the city from the top of the tower but if you're only brave enough to do this once (me :oops: ) then you can really miss out.

It's worth visiting Liseberg. Even without the rides it's a theme park on a steep hill in the middle of a city. Such a bizarre place.

Sounds fab to me - a bit like Blue Fire but with a bit more to it.

Just stumbled on this monster of a coaster set to open in 2014, and I have no idea how it's been overlooked! 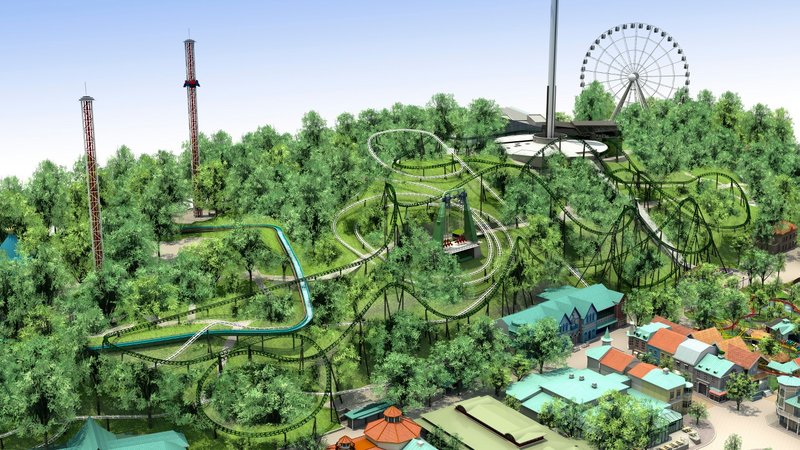 It's being manufactured by Mack, and is set to have 2 launches, 7 inversions and a massive track length of 4,530 ft giving a total ridetime of 2 mins and 10 seconds. Okay, it's not a record breaker or a world's first, but it's just simply a incredibly good sized coaster, costing just short of £20million.

The coaster's minisite can be found here.

It's not been overlooked by anyone other than you.

Liseberg is one of my absolute favourite European parks, and Helix looks stunning. Certainly my most anticipated new coaster of 2014.

Users browsing this forum: No registered users and 79 guests