"amcmaster1" wrote:
Does anyone have any idea what there new attraction for 2011 is going to be?

They have been granted permission to build a kids indoor softplay area for 2011 :-(
ThrillJunkieUK
Top

Well at least it will be something new!
Wishing i was back in the Caribbean
Top

News about their 2011 attraction has been released on their Facebook page. 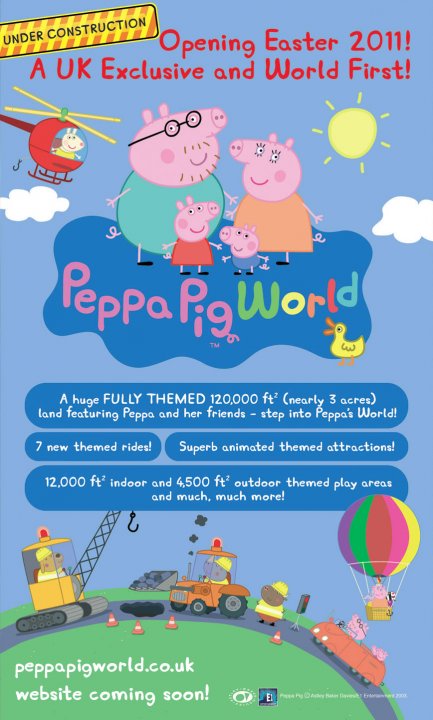 Is nobody excited by this? :lol:

Paultons Park is brilliant as it is. Peppa Pig is also brilliant. The two together could form an explosion of brilliance that could wipe out the majority of Southern England!

Or maybe not, but it's still brilliant stuff - honest :)
If you\'ve got a problem, stuff a worm in it!

But how long untill it dies out? My sisters gone off it already after watching it what about 3-4 times.. thats my only concern! :D

Ugh. I thought they were trying to get it right from now on. Peppa Pig World? NO! If Paulton's Park have this land to invest in and money to spend then why not take on the other theme parks with good rides and experiences? Has it not been proved so many times that things like this do not work? Apart from the fans you get who happen to like the show, I guess. However, a collaboration like this will get out of date and unpopular in several months, anyway.

As long as we don't have annoying 'snort' sound effects all over the place. :x :P
Top

The problem is, with Thomas Land; Drayton Manor kind of prooved that it did work!
Top

The thing to remember about Paultons Park and Peppa Pig is... they're not really aimed at us :wink:

But seriously, they better hope the franchise is still popular come Easter 2011. And I hope they seek some planning permission this time :P
[size=90]For some things there is no rational explanation. There is no way out. There is no happy ending to this story. Welcome to the unknown. Welcome to eternal darkness.

Thomas Ye Tank is a timeless classic. Beano used to be a classic, but seemed to die out not long after CWoA built Beanoland.

To be honest, I've never seen Peppa Pig, so I can't really pass judgement on it fairly. But it seems to be quite popular at the moment. Will it be a wise long term investment? Your guess is as good as mine.

But surely anything new at Paultons is a good move. It's a lovely little park, and I always recommend it to friends with young kids. I just hope they aim more at the Chessington market (something for everyone), rather than the Legoland market (boring as hell if you're over 10).
Top

Thing is, it's recognisable characters.

Maxi-Minor_Furie absolutely HATES Bob the Build and Thomas the Tank engine. He will not sit through more than a minute of either program.

Yet, Drayton Manor to him is "Thomas Land". As in "I want to go to Thomas Land". He only spends five minutes each visit there, but it's a recognisable hook, it's allowing him to enter the world created on the small screen.

Likewise, we go to Butlins each year and they have "Bob the Builder Yards". It's just a small fairground with some very ropey themed Bob rides (ie, they have nothing to do with BtB other than the giant Bob stood outside). Again though, the place sticks in the kids minds. They want to go there - it's a recognisable franchise they can experience.

Peppa Pig started when Maxi-Minor_Furie was about 18 months old - it's a three year or so old franchise now. At first, we thought it was a little too cult to be big. If you're a parent, it's actually a fantastic show.

Firstly, for the right age group (under fours really), it introduces "big world" concepts and explains them and puts them into perspective in a fun way. It may be about tidying up, going to the dentist, experiencing fog, Dad doing DIY, washing the car - lots of simple, mundane things we take for granted. Things though which are new, exciting and perhaps even scary to a child. Peppa Pig deals with them all in a brilliant way - seriously.

Secondly, it has an underlying humour the parent's will understand. It's quite subtle, but it's a very clever parody of modern family life. So if you actually watch it with your kids, you will both get a lot out of it.

Does this mean it will be popular forever, and deserves a "world" of it's own? Probably not (the creators have already moved on to 'Ben and Holly's Little Kingdom'), but it is still a world kids can recognise and step into. It will be brought to life and they will love it. It's spot on for the age range Paultons go for and it will prove to be extremely popular - mark my words :)
If you\'ve got a problem, stuff a worm in it!

Maxi-Minor_Furie absolutely HATES Bob the Build and Thomas the Tank engine. He will not sit through more than a minute of either program.

Yet, Drayton Manor to him is "Thomas Land". As in "I want to go to Thomas Land". He only spends five minutes each visit there, but it's a recognisable hook, it's allowing him to enter the world created on the small screen.

Exactly. Thomas land put Drayton on the map far more than any stand up coaster or drop ride ever could. I'm 34, but am curious to see Peppa Pig for one simple reason; it is nice to see the UK get a handle on theming; even if it is the smaller parks that are having to lead the way...

I suppose this move is a good move however what's left that they could choose from? Animation childrens tv show wise... Thomas at Drayton, Dennis at Chessington, (R.I.P - But it has already happened) but what about Bob The Builder? He is more popular than Peppa Pig nervertheless i am not sure if it is in use already elsewhere. An average move at this stage and i hope it is a proper effort not a quick fix up - I.E Beanoland - R.I.P! :(

I still think though if Paulton do this right and include a Mack Youngster, a frog hopper and a wild moue or something like that (another coaster) then this WILL be a major new 'thing to look forward to' in 2011 for the U.K.

Only other point is, it could be so much better if they made their own chracters (Like CCl) or would that be to challenging for Paultons? I'll never know... :)

I hope this succeds and as mentioned above, please make sure you have go planning permission! :P Lol. If it is a success, I suspect that we will see a succession of smaller parks following the trend. Horrible Histories at Lightwater Valley, Wallace and Gromit at Flamingoland, the Mr Men at Oakwood? Who knows.

Paultons have officially announced there will be no coaster to go with this. There's a big "play barn" thing and then either 6 or 7 new rides. They already have frog hoppers, so I don't know what they're be, but the age range they're aiming at is the under six market, so they'll just be very simple roundabout affairs I imagine.

I think this is a mistake personally. The great thing about Thomas Land is although its a kids TV show i still enjoyed visiting as I remember the show from when i was growing up but how many adults without kids know Peppa Pig? Also Thomas is aimed at a larger age range. Anyone older than 6 won't be interested in this area.

So will these ride be new or rethemed?
ThrillJunkieUK
Top

"ThrillJunkie" wrote:
Anyone older than 6 won't be interested in this area.

"ThrillJunkie" wrote:
So will these ride be new or rethemed?

New "attractions", but ones which "can be easily rethemed when the contract finishes if needs be". So I imagine they'll be a standard ride type, with simple stickers or something to "franchise" them. the rest will no doubt just be fibre cast models littered about.
If you\'ve got a problem, stuff a worm in it!

Wow that will be good for the park im sure it will have a similar effect on the park that tHomas Land did for Drayton.

Is it replacing an existing area or will it be completely new?
Wishing i was back in the Caribbean
Top

A new topic has been started about this.

"ThrillJunkie" wrote:
how many adults without kids know Peppa Pig?

Well, to be fair, we're not the target audience, are we? :lol: The only reason I went to Paultons was to bump up my coaster count.
Top
Post Reply