Having a read about in different places, rumour has it that its going to be a new style Vekoma flying coaster, although this hasn't been confirmed by either the park or by Vekoma, so should be treated as nothing but a rumour.

Here is an article from Looopings. Once translated it gives a very rough idea of what the rumour is.
Top

Interesting. Knowing Phantasialand, if this rumour is true then they will be confident that the coaster will be a decent experience and will fit in with their plans for the area. Phantasialand are fast building a reputation of having amazing ride experiences combined with stunning theming and I expect this next project will be no exception. Whilst the park is limited on space, they still have plenty of areas they can redevelop. Give it another 5-8 years and I think Phantasialand will easily challenge as one of the best parks out there.

I'm going to Phantasialand next week Monday-wednesday and staying in hotel matamba. Does anyone have any info on the ert hotel guests get on taron as I can't find anything on the official website apart from one pop-up that appeared when looking at the hotel prices.
Top

So Phantasialand just did this, and it's a bit out of the blue.


After Black Mamba, Talocan, Wave Flight, Mouse au Chocolat, Chiapas, Raik and Taron await you in the future with F.L.Y. A roller coaster novelty. The first Flying Launch Coaster and longest Flying Coaster in the world will be embedded in the unique Rookburgh project. - Translated Video Description

All aboard the hype train!

Probably confirms its gonna be a new model of a Vekoma Flying Coaster, Vekoma have been hitting it out of the park recently so hopefully its gonna be fantastic! I've also always wanted a launched flyer as it would probably feel like being a superhero! I do wonder if its name is going to be F. L. Y. or if its gonna change...

Looking forward to this, hopefully its for 2018 as I'd love to make a trip for next year!

theparklifekid wrote:
I've also always wanted a launched flyer as it would probably feel like being a superhero!

When Thunderbird the launched wing coaster opened back in 2015 imo it was only a matter of time before we would see a launched flying coaster from a manufacturer.
I'll for sure be making a stop to Phantasialand when this opens. Taron, F.L.Y & Talocan <3
Formerly known under username Andy Mc
Top

I'm like really excited about this and i've never been to the park. Does that make me weird

Vekoma would be a great manufacturer, especially if they use this - https://m.youtube.com/watch?time_continue=7&v=YsYEH7vwneI
Top

Here's a brand new poster/billboard Phantasialand have put up!

Rookburgh. I take it then that this launched flying coaster is being built in what looks like a steampunk themed area of the park? I am seriously in love rn.

Interestingly people kind of figured out a flying coaster from Vekoma was coming as early as April 7th this year according to this website little did they know it would be launched however.

My question is now will they stick to the traditional style of flying Vekoma and will you be launched while on your back from the station. An odd sensation to say the least, personally I feel this would detract from the launch, it'd be hard to look where you were heading.

As for what Dom posted I can't make out what's going on with that, looks a weird setup.
Formerly known under username Andy Mc
Top

Yes it's going to be built a new steampunk inspired area.

If i was to hazard some guesses on possible ways this could launch, it could launch either in a seated position and then after the launch turn into a flyer somehow (Not sure its possible so unlikley), or it could be on your back facing the sky launch (Which could be kind of vomit inducing) or on your stomach, Galactica style, and then launch in that position.

It is a bit strange, and the following is purely speculation, but it could be a new style of loading they were testing. So a sideways load, but it still doesn't make sense as when the train reaches to top and it flips over and you would still be facing sideways, unless of course they figure some way of turning each car around. Will be interesting to find out how they do it.
Top

Dom wrote:
It is a bit strange, and the following is purely speculation, but it could be a new style of loading they were testing. So a sideways load, but it still doesn't make sense as when the train reaches to top and it flips over and you would still be facing sideways, unless of course they figure some way of turning each car around. Will be interesting to find out how they do it.

That would seem the most likely at this point. You can see on this picture of the train on their prototype the mechanism that will turn the seats into forward flying position when the track goes to inverted position. It even has a hankey attached to it so they can see it turning while testing as seats not attached yet.

And this video gives a better explanation of how it will work.
Top

Supports have gone up over at Phantasialand. The support is for track at a 90° angle, so the new Vekoma prototype as seen in this video seems even more likely. Construction is in full swing on Phantasialand's new coaster! 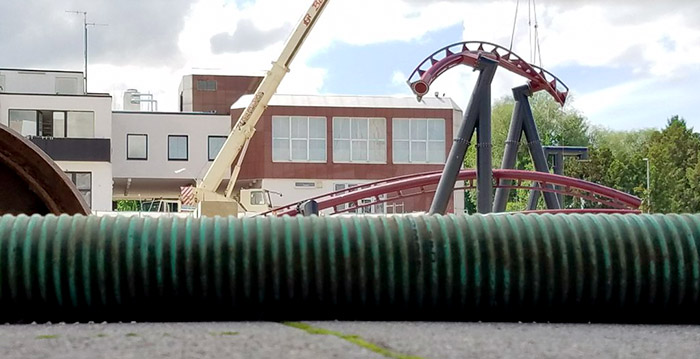 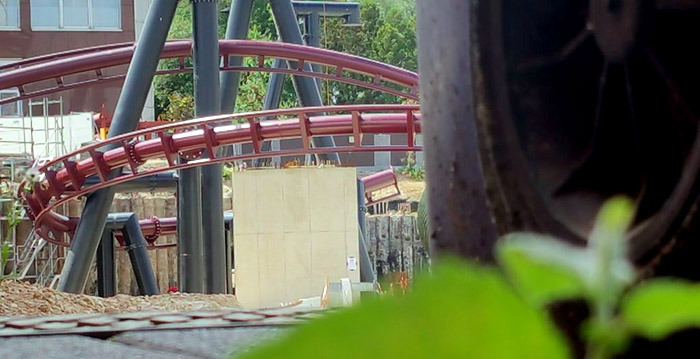 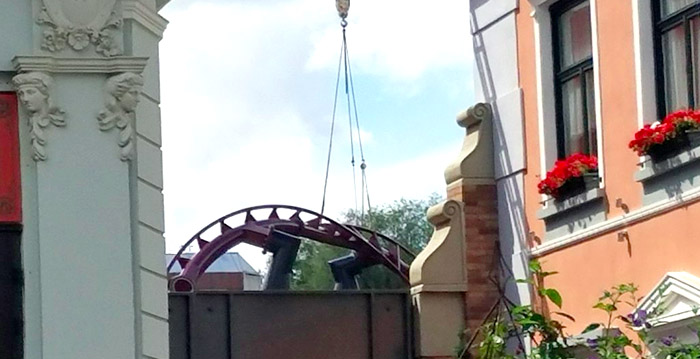 Looks like if they merged Vampire and Nemesis together! This looks exciting!
[Insert Signature Here]

Woah, woah, woah. Feels like this thing was only just announced, and now we have this much construction? That's some awesome stuff! Phantasialand never fails to amaze; I have top expectations for this project.

Oh wow, this is being built at very quick pace. If Klugheim is anything to go by though it may be that installing the coaster track is just the first stage - they could be looking to construct a fully immersive area around it once the track is in place. Looks like I need to look into a return trip to Phantasialand at some point in the near future!

Yeah, I'm still keeping my mind on a 2019 opening. I hear this could be one of three attractions in Rookburgh so I am not betting on a 2018 opening just yet.

I have to admit I'm not looking forward to the coaster at all, however I'm extremely excited about the area! Now the issue is where do I go... Phantasialand or Liseberg... or both?

I'm looking forward to this massively, I'm hoping for a 2018 opening, as thats when I'm planning my first trip to this park. However it wouldn't surprise me if it was a 2019 addition. That being said, track is being installed quite fast, so if they manage to finish it by say, September, they could start on theming and testing straight away and possibly finish it by mid next year!

Users browsing this forum: No registered users and 66 guests
×