I have heard rumors about that...
Top

The layout in the picture is 100% Knightmare!!!!!!
If this does happen I will be sure to make a trip to ride it again it was my first ever coaster!
SeaWorld has rescued over 35,000 animals in need![/i]
Top

It might have been the plans for it, I thought the ride itself was sold for scrap metal.
Top

The model in the article is Camelot's actual model of Knightmare, used in the coaster's first press announcement complete with the infamous medieval plug socket in the background.

It makes sense as Southport have hoovered up lots of Camelot including Excalibur 2 and the diesel powered Dragon Coaster, I really hope it comes through as it would be nice to see Knightmare operating rather than rusting even more, I just hope they paint it.

Interesting fact Camelot never owned the coaster they operated it on behalf of IE Park who were trying to sell it and thought they'd have more chance of finding a buyer if it was operating rather than in storage.
Top

Anybody by any chance have any further updates on Knightmare?
SeaWorld has rescued over 35,000 animals in need![/i]
Top

Camelot was on hidden Britain by drones on channel 4 last night quite interesting interviews with owner and old employees. Can probably get in on catch up
Top

I watched this too. It was really interesting to watch. I don’t know when it was filmed but gave some lovely views of Knightmare as well!
Top

Thanks for the heads up about this, I used to visit Camelot with my family when I was young as we lived fairly locally, and I have fond memories of it.
Although the two standout memories I have are bailing from the queue line for one of the rides after hearing people's screams and being attacked by wasps while picnicking in the stands during the jousting show

Sad to see the disrepair it has fallen into , but I found the segment fascinating.
Will give the rest of the show a watch now too as I was previously unaware of it.

Its crazy why knightmare wasnt bought by another park during closure as its a brilliant coaster.
Top

Apologies if this is the wrong place to post this, I'm (very) new to this forum.

This is one hell of a long shot, but does anyone know what happened to some of the old vehicles used at the Camelot theme park?.

Specially, we're trying to find the old merlin milkfloat which was used to ferry items around the park. My family had a milkfloat business from 1912 until the late 80's, and owing to illness my family wound up the business - the last milk float was sold and eventually ended up in Camelot (we went back several times just to go visit).

I'm trying to find the whereabouts of this to hopefully reunite with the family, if anyone has any information (auction houses used during the receivership stage etc) or possibly have any contacts on site, I would be extremely grateful.

Unfortunately it's probably not good news.  I did manage to find a pic taken by some 'urban explorers'  when the park first got into trouble. It's been 10 years since it was taken, It's likely in a state beyond repairing if it was still in that location because of rust and vandalism.

If you can make out the number plate from this photo, you can look up some limited details such as MOTs but you'll struggle to legally get info on who the current owners are. 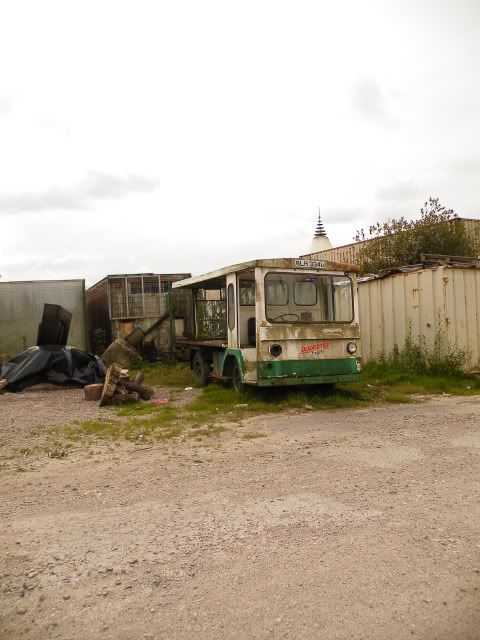 Thanks, just had a look and thankfully that's not it - the origional plate starts with ERN **** (after my great uncle who bought it).

Been in touch with the DVLA already to try and get *any* info (including if it has been scrapped, sold at auction) and they've been less than helpful/forthcoming.
Top
Post Reply