Dreamland have abandoned their pay for entry system. They have introduced a pay per ride/ wristband system. This will start on Saturday.

The wristbands will cost £12 for someone over 1.25m tall and £8.00 for under. They are also offering a variety of other wristbands such as a weekender band, a ride and dine family of 4 and all access wristband that will include the roller rink.

The pay per ride system will be token based, price unknown as it isn't on their website how much single tokens cost, but the Scenic Railway will cost 4 tokens.
Top

Full details on all mazes and one experience have now been released, and if you thought 2015 was good just wait for 2016 as it sounds better than ever!

None of Screamlands returning mazes from 2015 will be following the same story line this year, however each have been altered to keep them fresh! 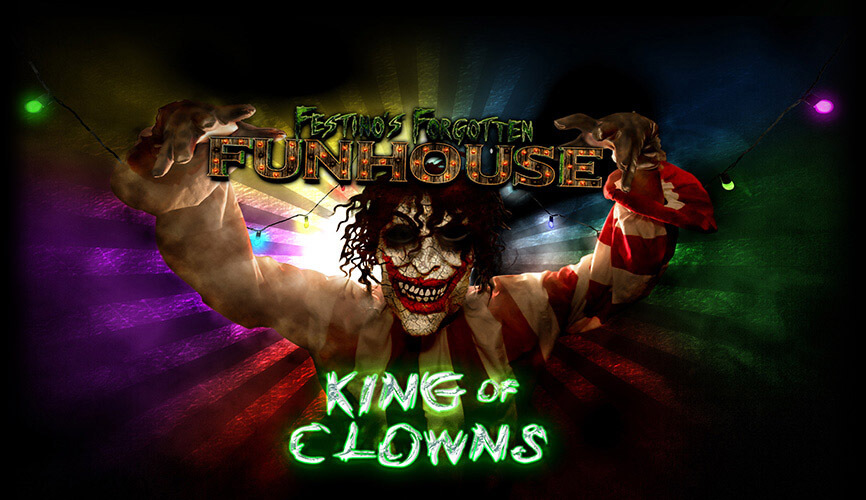 Pearlywight, the self-styled king of clowns, and Alonzo Festino's one-time apprentice, has taken control of the old funhouse. Frenzied with fury, the cannibal clown and his hoard of carnivorous cohorts have overthrown Festino, presenting Festino's Forgotten Funhouse in their own sinister style.

It is guaranteed to wipe the smile off your face permanently! 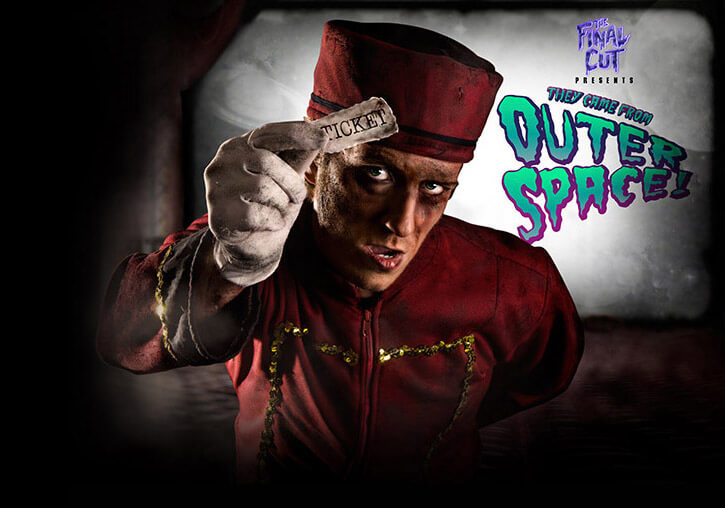 The Final Cut Presents... They Came From Outer Space

Step into the movies as you take the starring role in a science-fiction screamer! Collect your ticket for Horrorwood Picture House, and pass through the silver screen... Become part of the action in an alien adventure, as The Final Cut takes on a whole new dimension. 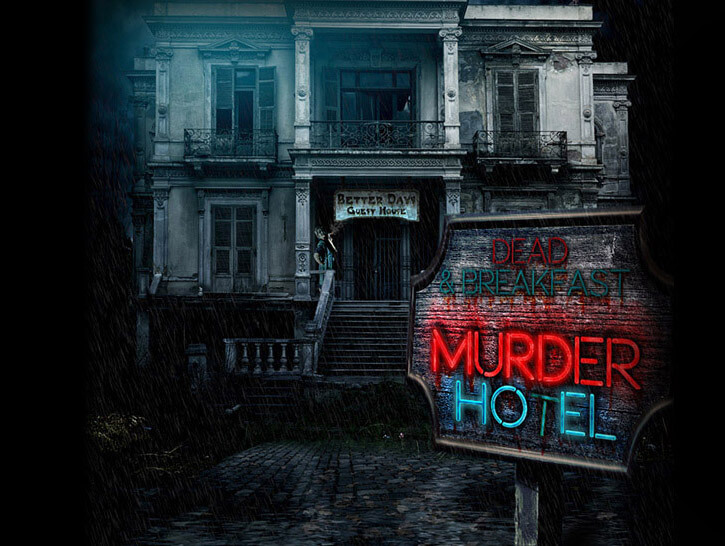 Fag Ash Lil, the sickingly sarcastic landlady at Better Days guest house, opens her creaking doors once again, to welcome you into her decrepit seaside hotel. But behind the salt-scarred façade, deep in the bowels of the building, an even darker horror awaits. Sharpen your senses as you take a journey into Dead & Breakfast, don't miss it, or you'll be gutted, but beware… the hunt is on. 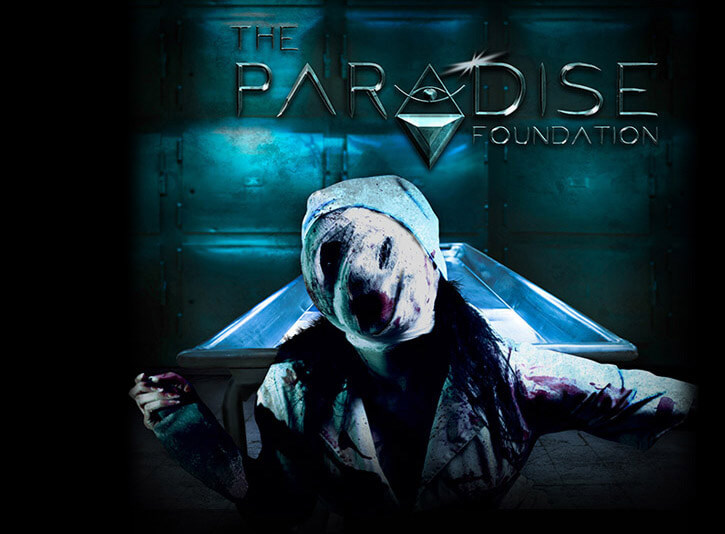 Happy but broke? Rich but unhappy? No problem… contact The Paradise Foundation, where we can transform you, literally, into the very best version of 'you’. Take a tour of our facility, or check yourself in fir the revolutionary, if controversial, BLISS full transformative service? Doctor Prometheus and his devotees will ensure you are never quite the same person again, but remember, paradise comes at a price… are you a patron or a provider? 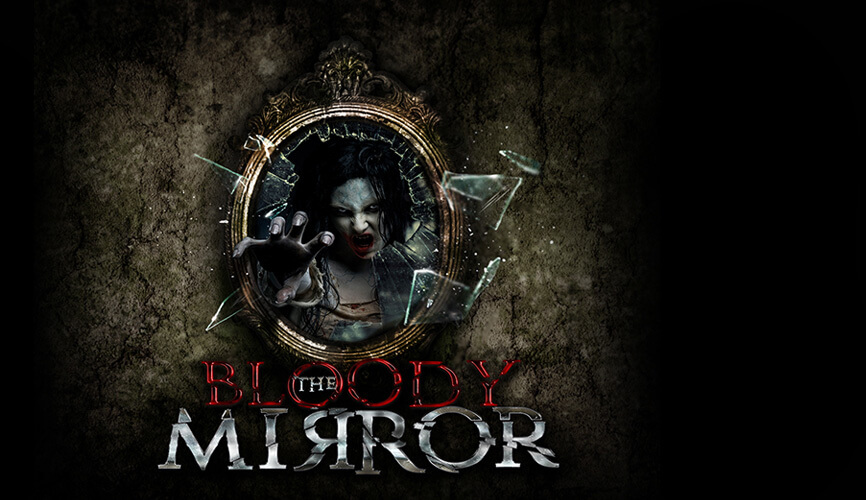 Enter a mist-clad netherworld of mirror and madness and journey towards an inevitable encounter with Bloody Mary herself as you gaze into the bloody mirror fir a trail with a twist.

Call her name… If you dare.

Currently only one sideshow has been announced and it's all new for 2016! 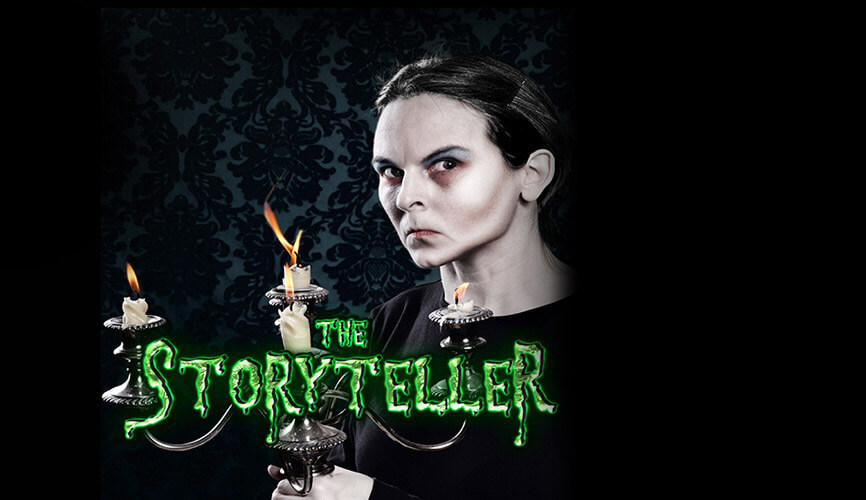 Join Eliza Body, the strictly sinister spinster, as she reads twisted tales from her weather worn storybook. But, be warned, as Ms Body has a peculiar propensity for bringing the characters in her stories vividly to life…

Screamland is certainly sounding fantastic this year, other events should watch out if it is anything like last year!

Further to Dom's post a little while back, they are now advertising that tokens are £1 each.
Burniel | Great at theme park knowledge, not so great at designing signatures.
Top

Early bird prices for Screamland have been announced as early bird tickets and fastracks have now been put on sale!

Like said these are early bird tickets and more dates, including the 31st, are expected to be added next month.

Punchinello, the King of Screamland, is back but this time he's not alone! Prepare for double trouble as he roams the park with his sordid sidekick and mistress Terrorsina! Here's our first look at Pearlywight, from Festino's Forgotten Funhouse - King of Clowns!

"Pearlywight, the cannibal clown has taken control of the Fun House from Alonzo Festino and has pronounced himself the King Of Clowns. Hungry for blood him and his fellow hoard of cannibal clowns are on the attack and looking for YOU! Can you make it out the other side?" 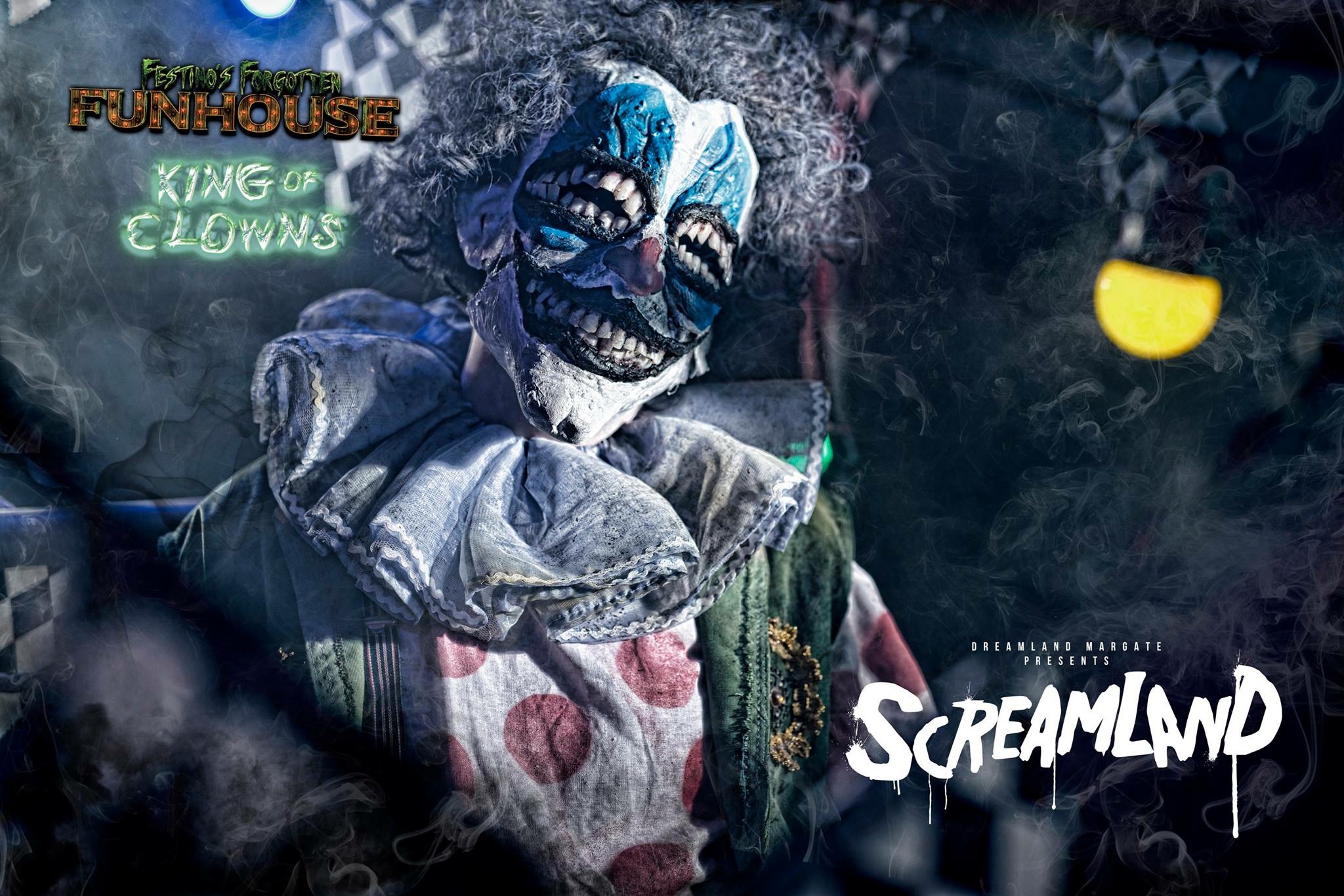 As as well as the first look at Dr. Prometheus from The Paradise Foundation!

"Meet Dr Prometheus. He's a psychopathic mastermind with a God Complex. He has revolutionised The Paradise Foundation introducing the controversial BLISS full transformative service. Fancy being transformed into the very best version of yourself? Take a tour of the facility and check in for the full treatment! You will not come out felling the same!" 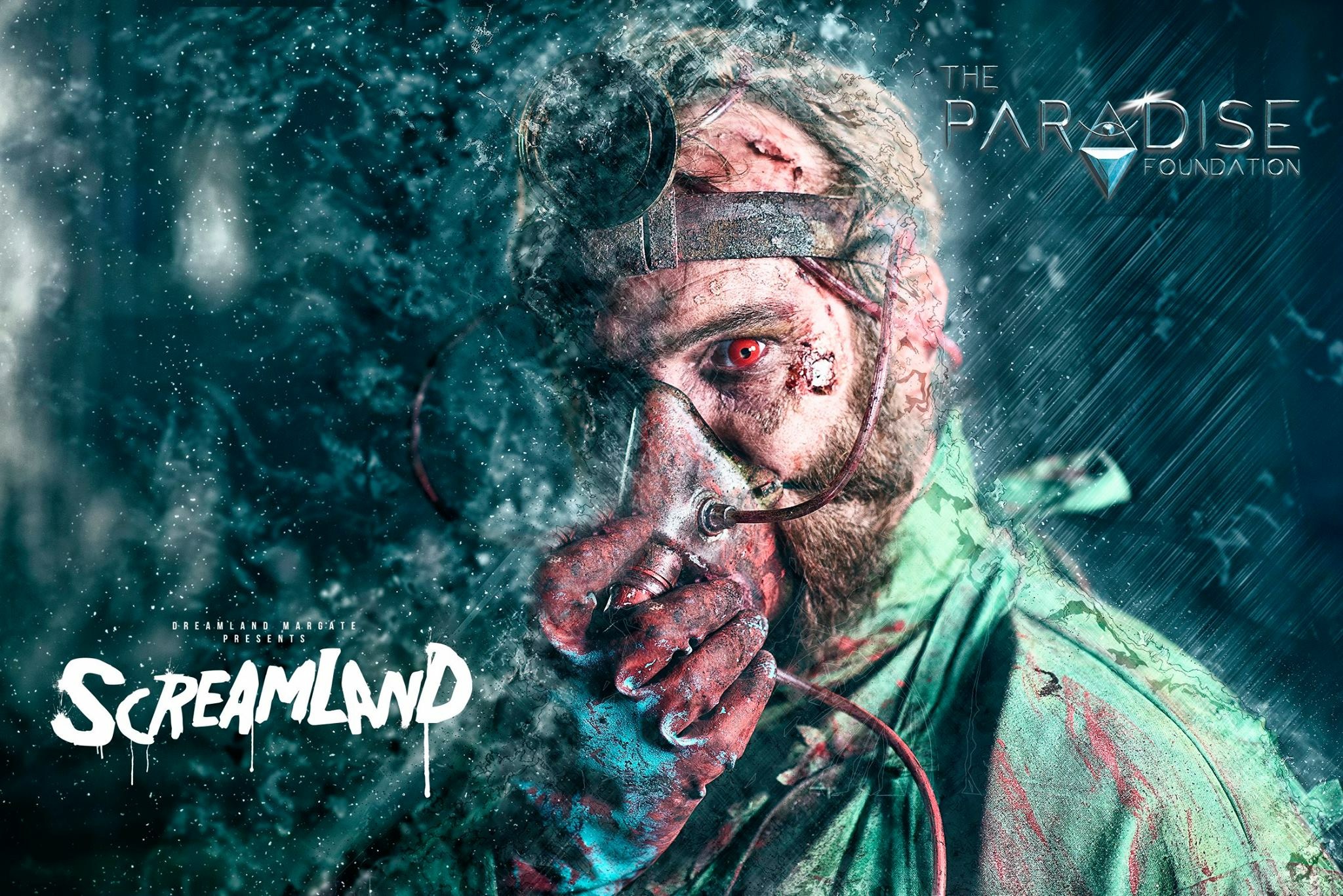 We then have Fag Ash Lil from Dead & Breakfast II - Murder Hotel!

"You've met Fag Ash Lil, the sickeningly sarcastic landlady at Better Days Guest House? Well, she opens her creaking doors once again to welcome you into her decrepit seaside hotel." 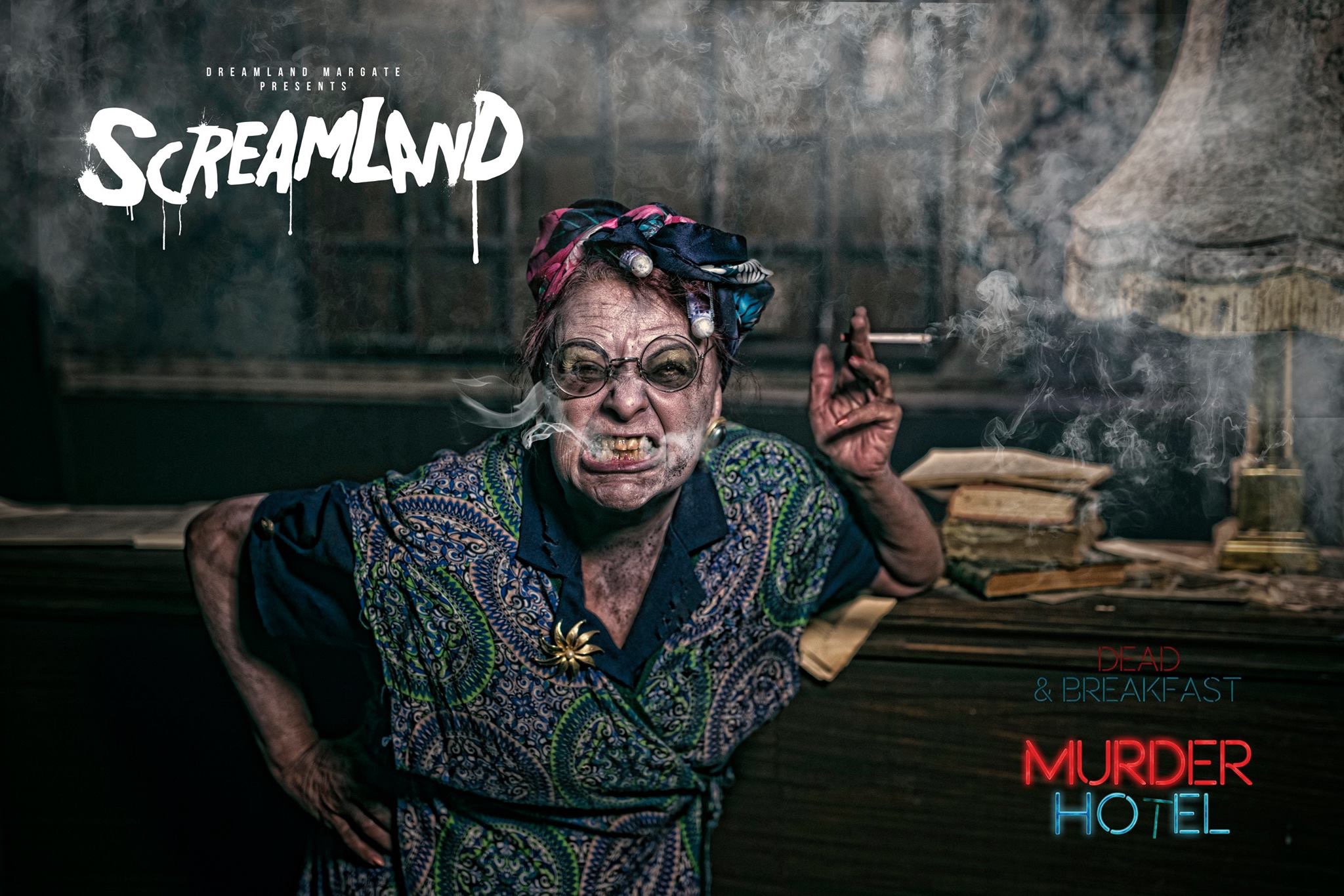 We then have Eliza Body, The Storyteller...

"Eliza Body is a stickler for the rules, diction and smartness and will not abide naughtiness or foolish fun. Only at Screamland will you witness her tales being told and sometimes her stories even come to life! Can you behave? Let's hope not!" 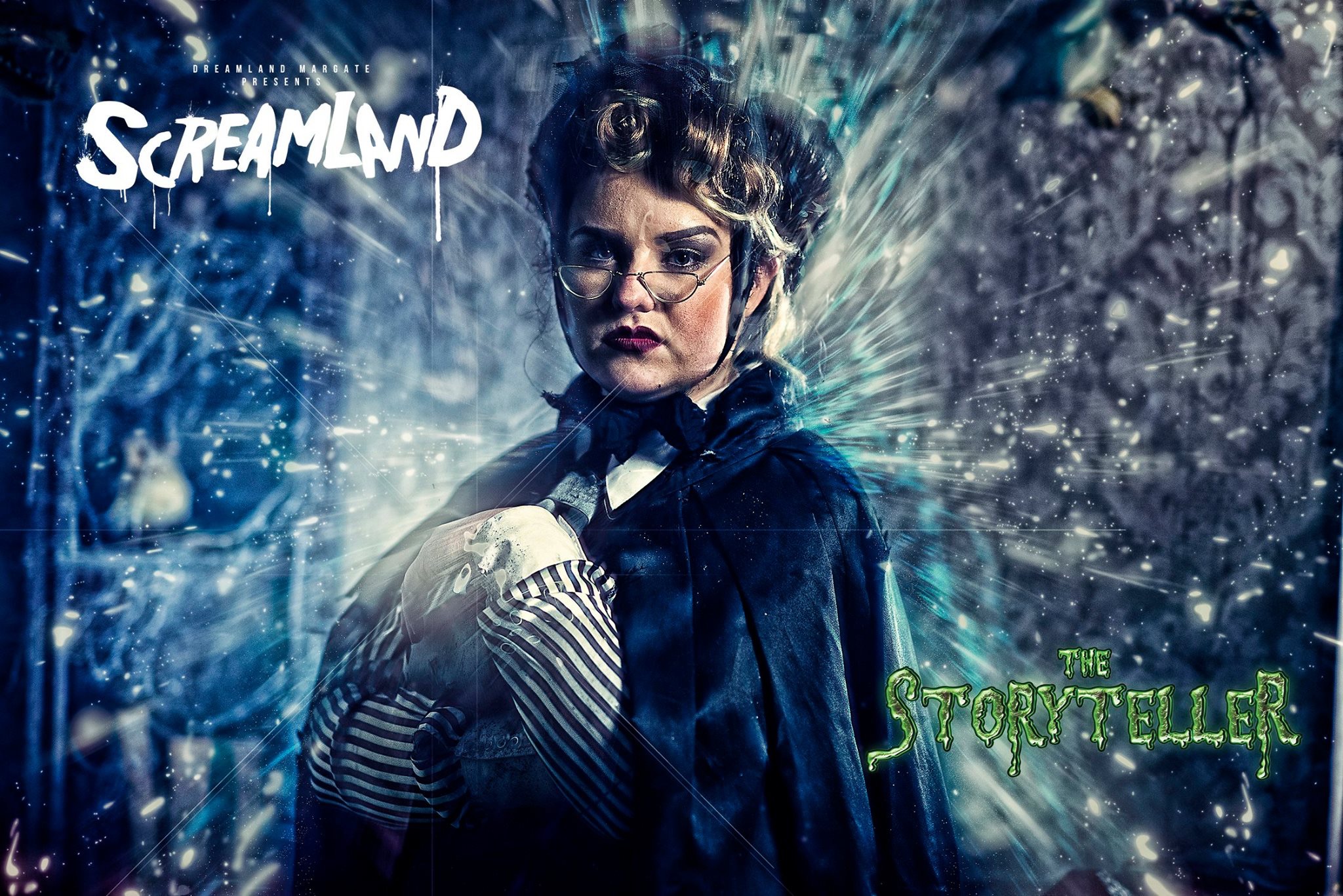 Lastly, we have Armand from The Final Cut... They Cane From Outer Space!

"Armand, The Box Office attendant at The Final Cut is ready to welcome you into this year's film, an alien exploration through various extra-terrestrial scenes." 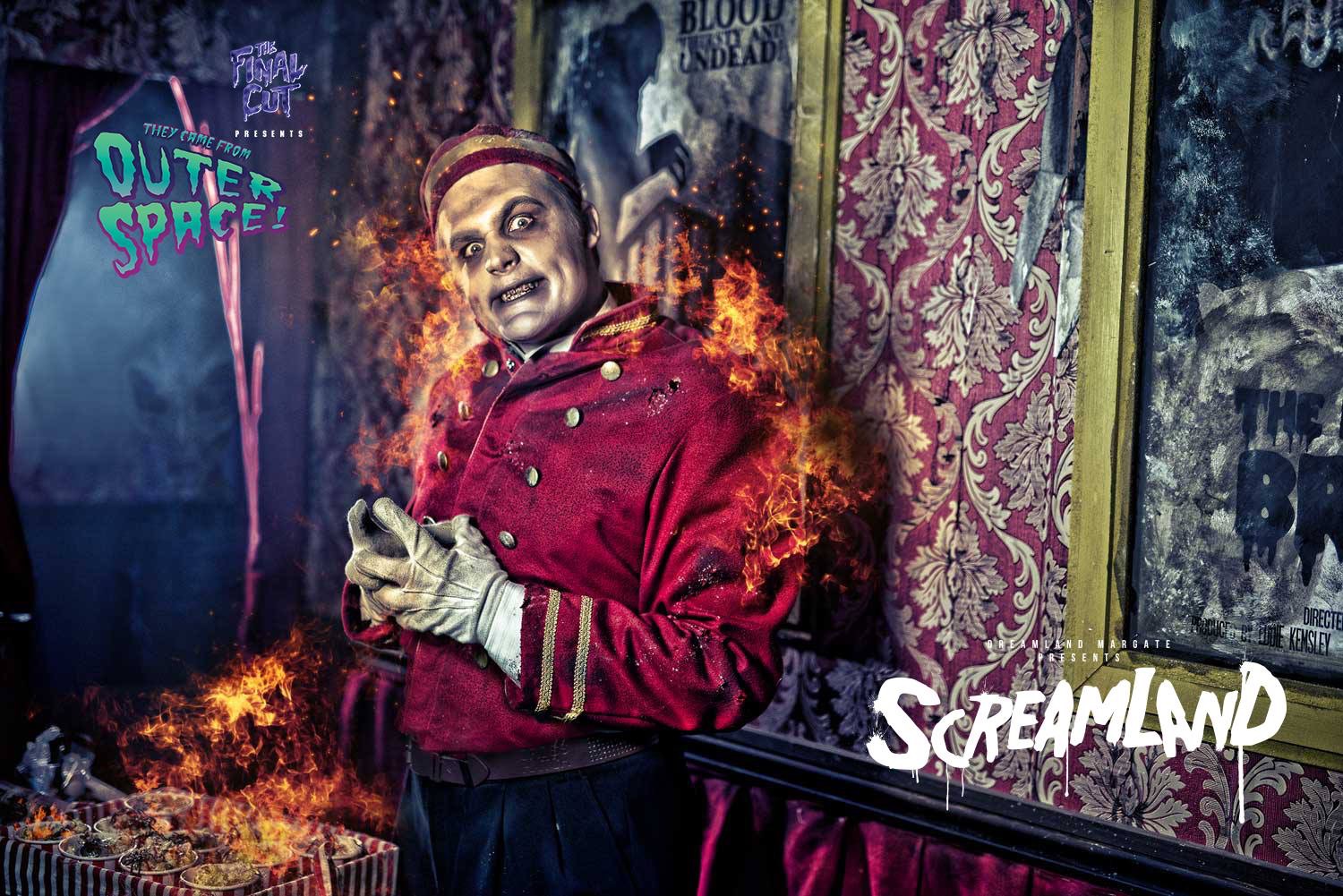 We should hopefully be seeing Bloody Mary in the coming days too! 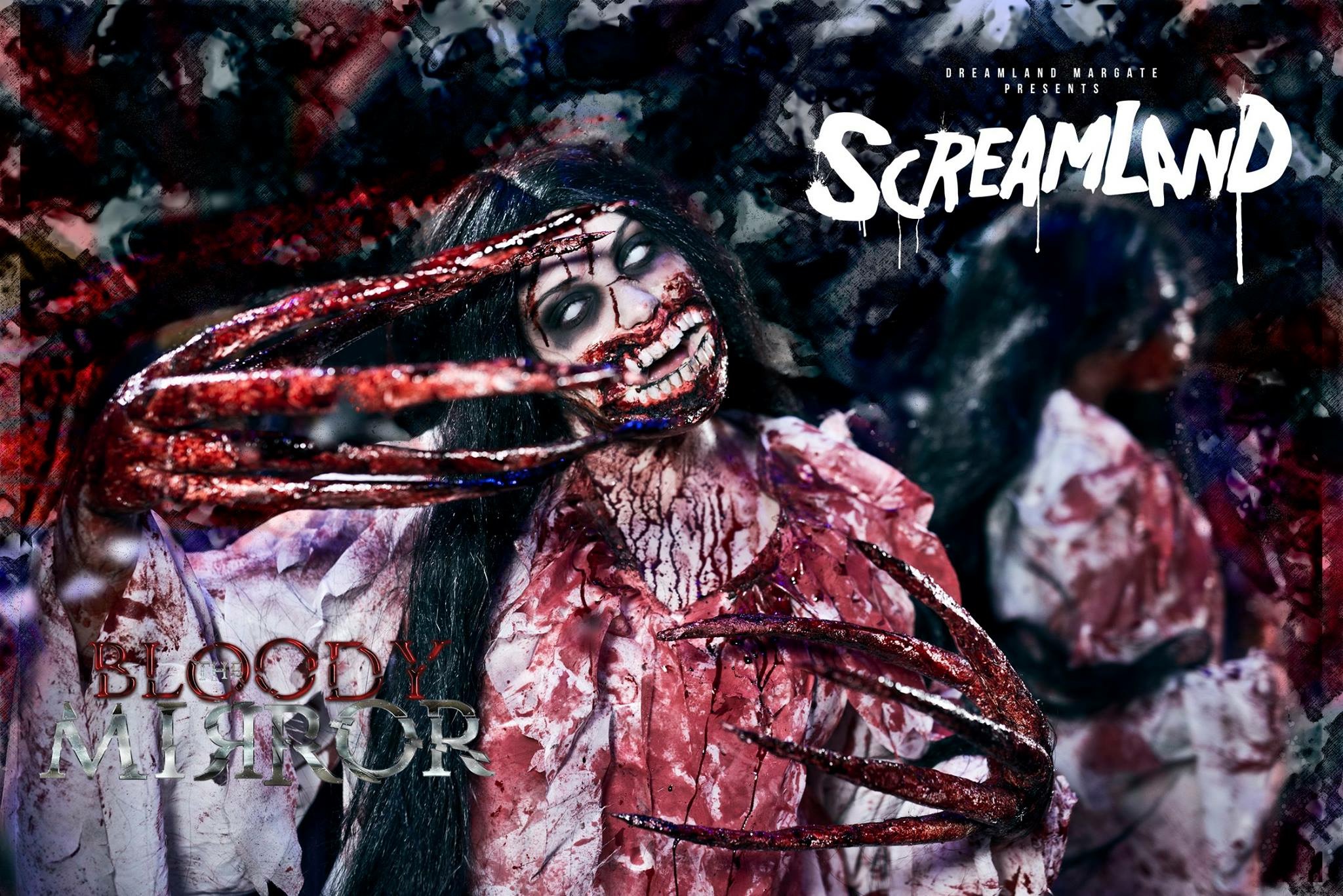 I must say, Screamland is looking rather impressive again this year. I may have to try and get down there to experience it as I had heard really great reviews of last years Screamland.
Top

The line-up does look very impressive, even from a company in administration!
The Paradise Foundation and Dead and Breakfast Murder Hotel particularly stand out.

Construction has started in The Final Cut Presents... They Came From Outer Space! 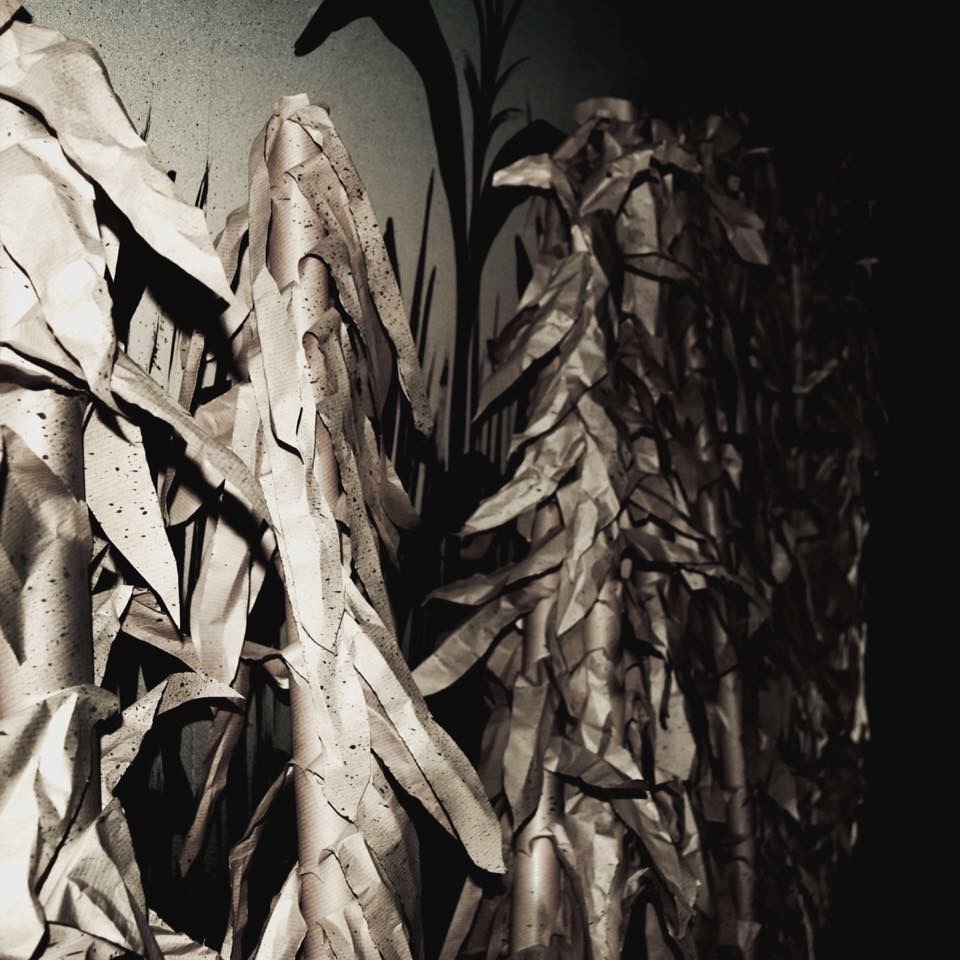 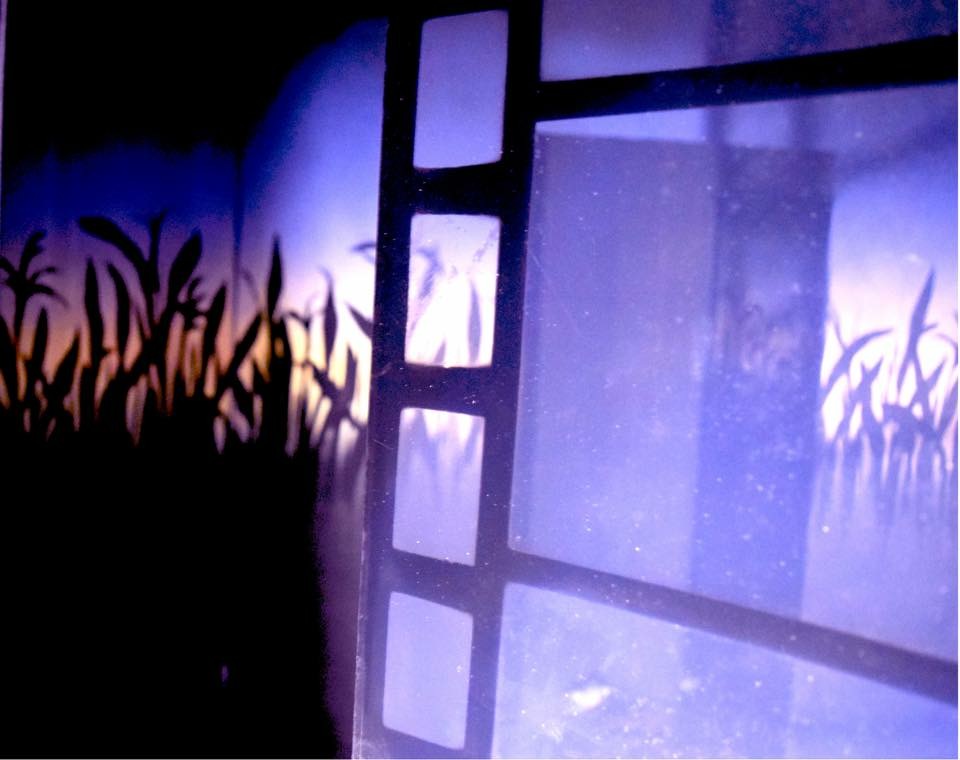 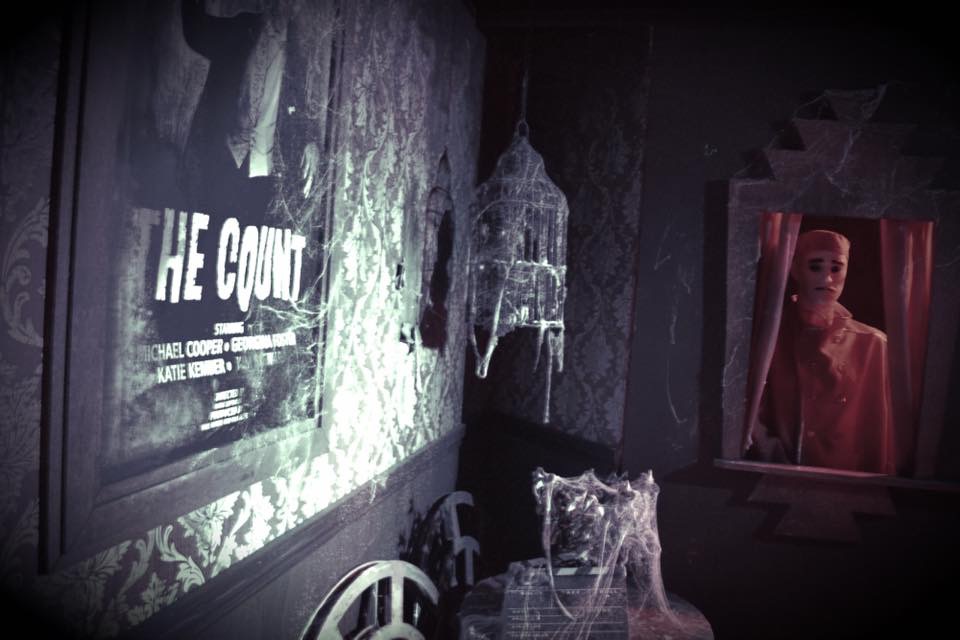 According to Screamscape, Dreamland has received a £10 million investment from the Caymen islands based Arrowgrass. This is to help improve the park facilities ahead of the planned attempt to sell the park to a more experienced company.
Top

Dreamland is apparently getting 9 new rides this year. These include an Air Race and a spinning coaster. A lot of the rides will be Zamperla.

Dreamland has now released an image of the new ride locations. As well as the 9 new rides, it looks like more trees have also been added this season. Its good to see them finally expanding into the back section of the park:

Looks so nice! Will try and get over there this year.

As part of a new £50 million investment in Dreamland, there are plans to build a Dreamland hotel on the seafront:

Users browsing this forum: No registered users and 52 guests
×