Lost Gravity has opened today - here's an on-ride POV, although it lacks any audio. This definitely looks to be Mack's answer to the Gerstlauer Eurofighter, if not a bit wackier.

Another POV from World of Parks with audio: https://www.youtube.com/watch?v=-3AXgWA5u7M

Walibi posted snapchats of the opening ceremony. It looked rather weird, dancers on the roof of the station, a weird looking guy in a lab coat... Worth checking out if you have snapchat
Ride count since the beginning of 2015: 1828!
Ride count 2020: 55!
Cred count: 97!

This coaster definitely reminds me of an Infinity Coaster - I bet Mack could do some really good things with this style and I hope that this (or the Mega Coaster/Launched Mega Coaster) is what Blackpool Pleasure Beach gets in 2017. That would be incredible.
Prepare to be mermalized!
Top

Walibi Holland have today announced that their Vekoma wooden coaster, Robin Hood, will be converted to a RMC hybrid coaster for 2019 - the first conversion of a European coaster.

Well, of all the wooden coasters in Europe I never imaginged that it would be Robin Hood at Walibi Holland that would be the first to anounce it'd be getting the RMC conversion treatment! Having been fortunate enough to ride Robin Hood in 2015 it is a fun little coaster, so I have high hopes that RMC will be able to elevate the ride experience and make it a stand out attraction for the park. Think I might need to plan a retun trip there!

Looopings are reporting of an accident that occurred earlier today at Walibi Holland in which a woman has been seriously injured. The accident is said to have happened on the Red Bull Kart Fight Exhibition Track, where the woman was injured when she crashed her kart into a railing.

Both a regular ambulance and an air ambulance were called to the scene of the accident, and eventually the woman was taken to hospital in the ambulance. Currently, the areas surrounding in the ride, and the nearby roller coaster Goliath are closed to the public while the park begin investigations into what happened. 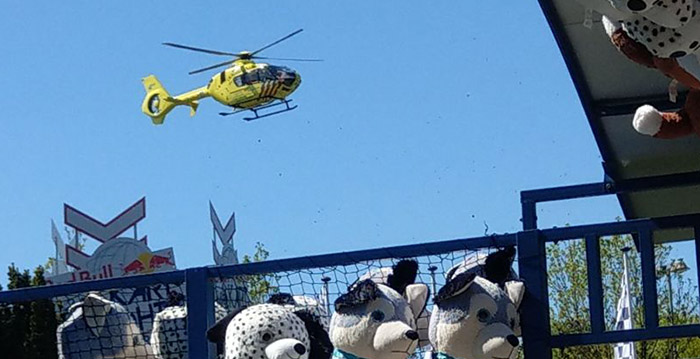 Looking at pictures of the karts, they look like the typical 'fun spot' style karts that are heavily speed limited and are surrounded with steel bumpers. Usually it's hard to do anything other than shake yourself up. Wonder if she managed to flip the kart.

Untamed, Walibi Holland's RMC coaster has been topped of in the last few days, meaning the ride has reached its highest point:

The ride will also feature the highest number of inversions of any RMC worldwide with a total of 5, although so far we only know what one of those will be. This video also seems to be the first confirmation I've seen so far of the ride's opening date - 1st July.

I will admit I was a little sceptical when Walibi announced they were converting Robin Hood to an RMC, but now seeing the progress of construction it's looking very, very good. It's also fantastic to finally see RMC slowly but surely bring more of their coasters to Europe. Walibi Holland has certainly moved a little bit higher up on my list of parks to re-visit!

With Walibi Holland opening for the new season, there have been a few more details released about Untamed. All details and photos taken from an article on Theme Park Inc.

First of all, we finally know what Untamed's trains will look like thanks to th below image revealed to invited press and enthusiast sites at a special event on the Park's opening day on 6th April. The lead car very much reminds me of the logo for Fury 325 at Carowinds:

Also confirmed were some of the key stats for the ride. The ride will reach a top speed of 57mpn (94km/h), taking guests through 5 inversions, and a first drop of 80 degrees. The ride will run 2 trains of 24 riders giving a maximum capacity of 900 riders per hour. There are some impressive photos of the layout in the article - I've picked out a couple below:

The ride queue line also features a nice nod to its predecessor, Robin Hood, with a section of track and a train, something which is a nice touch:

As part of the development, the old Sherwood Forest area has become 'Wilderness'. Apparently the idea is that nature has taken over the area with it having an 'abandoned and rustic vibe'. This has also meant the Top Spin, Excalibur, has been re-themed to 'Blast', in the process gaing new, multi coloured seating, and the madhouse, Merlin's Magic Castle, has had some random grafitti painted all over it which, in my opinion, totally spoiled it.

Finally, this season will also see improved food and beverage offering, including the arrival of Cinnabon which is an amazing brand to have in a theme park - UK parks take note, we need Cinnabon to come to UK parks please!!

Ladyofthelake wrote:
Finally, this season will also see improved food and beverage offering, including the arrival of Cinnabon which is an amazing brand to have in a theme park - UK parks take note, we need Cinnabon to come to UK parks please!!

Careful what you wish for, I once stayed in a hotel with an onsite Cinnabon. I gained a lot of weight that week.

We have an early POV! It looks amazing and its only in its early test runs so it can only get faster!
Last edited by Swarm Chris on Tue Jun 04, 2019 4:11 pm, edited 1 time in total.
Reason: Embedding video

Walibi Holland will be redoing the Speedzone area with a Racetrack theme. Seems like the kids tower will probably be renamed too.

Users browsing this forum: No registered users and 11 guests
×