Extra now on top of an already high castle price and the dungeons?? 5 actors max and 30 minutes??????

Went today and was extremely disappointed with the Dragon Tower not sure what I expected but I expected more.

[spoiler:qlysz3xr]You enter a well themed room which is supposedly Gaius' work area where a new recruit is coming up with a potion. She is fairly entertaining and there are a couple of moments when a book falls off a shelf and another shelf breaks showing that the one of guests possess magic ability. There is some interplay with one of the children in the group with a little bit of business with a prop.

Gaius himself makes an appearance - a nice recorded cameo from Richard Wilson - before we head upstairs. So far so good.

Upstairs is a small cinema style room. The dragon appears on screen and interacts with 3 or 4 of the group (this surprised the 1st person who assumed that it was just a set animation) but the interaction was limited and didn't last too long. It finished with a few smoke effects to mimic the dragon's fire and that was that. All over - except to look at the photo you posed for on entry. Having paid £4.80 for admittance I didn't feel like shelling out another £6 for a photo.[/spoiler:qlysz3xr]

A real waste of a good IP. I don't mind paying a little extra (even as a MAP holder) but only if what I get is worth it - this isn't. The 4D cinema at Tussauds is an extra for the paying public (but not for MAP holders - at least it wasn't when I visited) but that would be worth a few extra quid unlike The Dragon Tower.
Top

I went a few weeks ago, and Eagie sums it up nicely. It is Merlin attempting to recreated the Sitch ride at Disneyland Paris, but failing to do it as well.

The first room is interesting, and the Dragon scene is okay, but it does not close very well, and you feel like there is more to come so you feel disappointed when you see the photo booth.

From what I was told, It is free to Premium Pass Holders.

"IanBassi" wrote:
From what I was told, It is free to Premium Pass Holders.

There are a limited number of tickets available to premium pass holders on a 1st come 1st served basis.
Top

Such a shame Warwick has gone this direction too with all the extra charges. The castle really is in a beautiful setting, its has really gone downhill the last few years tho. I have not bothered visiting with my pass for ages now.

Even the jousting shows are not what they used to be :(

Surely this Merlin thing could not be any worse than The Dream of Battle addition.
Top

This year at Warwick Castle the Castle Dungeon has got a brand new room called the Witches of Warwick, it replaces the Execution finale (which has now been cleverly fitted in straight after Judgement.) 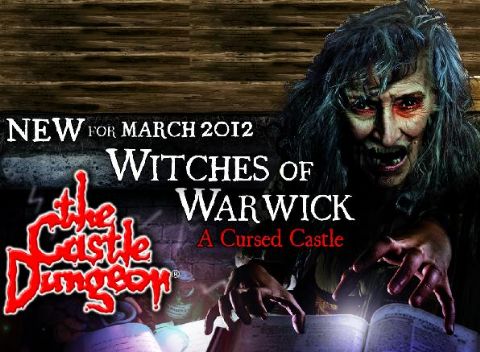 The advert is here - http://www.youtube.com/watch?v=BJGPTSyRGBk

Has anyone been in the Castle Dungeon since it has re-opened, and does anyone have a review on what it was like?

I personally find it pretty terrifying, probably the scariest room in any Dungeon I have been into. The effects are clever and there are a lot of different scares - don't want to ruin it but it's amazing what a bit of thunder, lightning and a step to the side can do!!!

There is a review here for those TTFers who don't plan on visiting the Castle in the near future - http://scaretour.weebly.com/review---the-castle-dungeon-at-warwick-castle---2012.html
Last edited by Skumfidus on Fri Apr 06, 2012 8:11 pm, edited 1 time in total.
Top

As in it's a scarier finale, or it's what they should install?
Top

They should try to install it. As much as it may not be permitted!

They can't get a ride in the Castle Dungeon I don't think. York is crying out for an Extremis though.

Heard good things about this new scene and I take it to be an indication of Merlin attempting to scare up the Dungeon brand a notch.
Top

Sounds interesting. Personally, my favourite dungeon (out of London, York, and Amsterdam) so far is Amsterdam. The Asylum room is genuinely scary. If it can match that, I'll be impressed.
Top

I'd say that this room is genuinely terrifying, I was literally clinging on the sides of the person next to me and I'm someone who enjoys scare mazes...I'd say it was at least as scary as a Scare Maze on a good day (Although obviously shorter). The rest of the dungeons quite light hearted but that bit is actually frightening.

Warwick will never get an Extremis, sadly...

Tbh though, I actually thought this was a better ending anyway than Extremis. Certainly leaves a longer, lasting impression!

(And no, I'm not just saying this for no reason...if I didn't think it was good I wouldn't have said anything)

Shan't be visiting anytime soon, any chance of a more in-depth spoiler...
Top

So I visited Warwick Castle for the first time ever on Saturday, and I really enjoyed myself! A really well presented castle and the Dungeons are most enjoyable (I term enjoyable loosely!).

The scenes are generic Merlin dungeons, but are well constructed, and you soon forget you've actually gone up a flight of stairs into the castle itself!

The newly added Witches of Warwick scene had me terrified - moreso than Sub-Terra! Really, really good! Spoilers? Read on..

Entering a room where a table stands in the middle, guests take their seats on benches around the edge of the room, with standing guests by the entry door. [Forgive my story telling - this is loosely what happened!]

An actor tells the room about a woman who was both revered and feared in the local community, and some suspected her to be a witch. When questioned, it was decided she was too dangerous and was to be banished from the castle (possibly sentenced to death?).

The actor is constantly moving around the room while telling the story, and at three or four intervals, the lights go out and the room is in complete darkness. When the lights come back on, the actor is always in someone's face!!

The story continues, and it is said that upon her removal, the scorned woman cursed all who came across the room we are currently sat in, and as she fled, she turned into a black dog - thus proving she was a witch. The actor then reveals that he is the witches son, and hints that we are all in grave danger.

The lights go out, and when they come back on, the actor is nowhere to be seen. The weighing scales on the table in the middle of the room begin to move of their own accord, and the lights begin to flash. Head ticklers lower from the ceiling before the lights go out again. After a prolonged and unnatural amount of time, faint strobe lighting begins and guess what... the witch is in your face!!! I hit the roof with terror!!

The witch visits every bench around the room, and then the real fun starts - bum balls

the only people who'll know what I mean are those who have ridden Kassandra at Europa Park! I squealed like a baby as the lights, bum pokers and loud noises continued.

I was too rattled at the end to know how it finished, I just know I was glad to be out of there :p.

Overall, a fantastic finale to a smaller scale dungeons, and certainly more terrifying than SubTerra!!

.When you say the "witch" is in your face, I take it you mean an actor?
Top

Massive apologies if my previous post doesn't make an awful lot of sense, I'm writing on my phone.

Ahh, cool. I wasn't sure if it was an actor, or some kind of animatronic that drops from the roof, or bursts through the wall, Amsterdam style.
Top

This room is excellent. Genuinely quite scary!

I was disappointed with the Dungeons themselves. Pretty much a carbon copy of Blackpool's and the same script, would have been nice to see some imagination from Mer.. pahhahah, sorry I couldn't finish that sentence. However the Witches of Warwick room was very good. Very creepy and well executed with the lights and sounds.

Also you can't use your annual pass for discount on the photos here.

All dungeons have clone rooms, sadly.

Users browsing this forum: No registered users and 126 guests
×