Disney Land Hong Kong has had to close its gates for the past 8 days due to them selling out. At the moment people will still be celebrating the chinese new year and this maybe why so many people have made the trip to the park.

But will they be able to handle the summer months crowds if this is what its getting like already.

Some people took it way to far though and were climbing the gates of the Disney park and lifting their children over even though the park was at full capacity. They claimed they had tickets but what they probably dont understand is that they brought flexible tickets which means they can visit within 6 months, but if the park sells out they can not enter. Personly i think its pathetic that fully grown adults are behaving so childish, visitor numbers are put on a park for a safety reason so they should just accept they will not be visiting that day.

Who would want to visit on such a busy day anyway. I know I wouldnt! :lol:

I think Disney and the Hong Kong government underestimated its popularity. But isn't the park only half complete? I'm sure I read somewhere they intend to open several other phases over the coming years.

So Hong Kong Disneyland is expanding quite a bit, so this year they are adding another Marvel Attraction, themed around my personal fave heroes, Ant-Man and Wasp!

The ride is a retheme of the Buzz Lightyear ride that recently closed and is to re open sometime (hopefully summer) this year!

I've never visited, but I am surprised they have removed the Buzz Lightyear (Toy Story) branding in favour of two Marvel characters. Change is always a good thing though

Changes have been officially confirmed for the opening dates of many of the expansions coming to Hong Kong Disneyland in the near future. The re-theme of the Buzz Lightyear ride, a new attraction themed to Ant-Man and the Wasp was supposed to be opening later this year, but has now been offficially confirmed to be pushed back until sometime in 2019.

Similarly, the castle transformation which was supposed to be happening in 2019 has been pushed back so that it will be completed for 2020. Some of the changes to the castle will include a new performance area and a lake for fountain shows!

The Frozen themed land has also been officially confirmed to have been delayed a year, and is now slated as opening in 2021.

The biggest (and best!) change that has been announced is that the new Frozen themed land which will be built at the very back of the parks Fantasyland will now include its own roller coaster, which will be similar to the likes of the Seven Dawarfs Mine Train ride at Magic Kingdom and Shanghai Disneyland!

In this time of happily-ever-after, peace and prosperity have returned to the kingdom of Arendelle. Queen Elsa has now embraced her magical ice powers, and she and Princess Anna have created a Summer Snow Day for the merriment of the kingdom. Guests are invited to take part in this joyous occasion and celebrate the day that Anna saved Elsa with an act of true love. Guests can join a musical journey to Elsa’s Ice Palace and also venture across the bridge to explore the neighboring forest. They will enjoy an exciting family thrill ride that traverses the natural landscape, built by Wandering Oaken for this special occasion. Whatever discoveries and experiences guests enjoy, they will find that Arendelle offers countless opportunities for surprise and delight during this kingdom-wide celebration.

Didn't realise they were rebuilding the castle. The old one was really really small and looked quite out of places with the hill in the background. Although it was probably the same size as the one in Anaheim.

That will be the hottest Frozen land in the world!

Hong Kong Disney is a really nice little park, which seems to be ever growing. The theming is some of the best in all the Disney parks.

Yeah, definitely! Some of the newer additions such as Mystic Manor demonstrate not just fantastic theming, but also storytelling at its very best!

The castle transformation I have mixed feelings on. On one hand, it was the smallest castle, even smaller than the original in California and it did seriously lack any real wow factor, but I don't think what they are planning to do to it makes it better, it just makes it bigger (they want to make it even taller than the castle at Shanghai). Personally I just think the new design looks a bit of a mess... they've kept the old castle pretty much the same and it just looks like they've added mismatching pieces anywhere they can, and in some of the newer concepts, they've tinted the colour of the castle walls even more yellow and it just looks horrible.

Pretty pleased about the new coaster coming to the Frozen land though, fingers crossed we'll get that in Paris too!

Seems like it'd be very likely the new coaster will come to Paris which would be neat. Still interested to know if/what changes will be made to the Frozen ride, can't see the versions being built around the world being straight clones given the age of the ride system, it's short length and capacity problems.

Not a fan of the new castle there, it's just a bit ugly really.
Top

Wow, disappointing to hear that pretty much all developments have been delayed. Can’t say I’m a fan of the castle makeover either.

We have a name and new concept art for the updated castle! 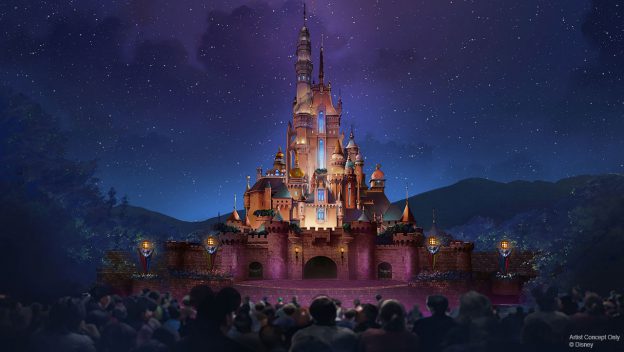 Along with this, more details on the Frozen area have been revealed including a clone of Frozen Ever After and a brand new coaster - Wandering Oaken’s Sliding Sleighs. This attraction will "will take guests on a winding journey through Arendelle. Each experience on Wandering Oaken’s Sliding Sleighs begins when you visit Oaken’s infamous store. Then, Olaf and Sven help pull your sled to the top of the lift before sending you on your way.". 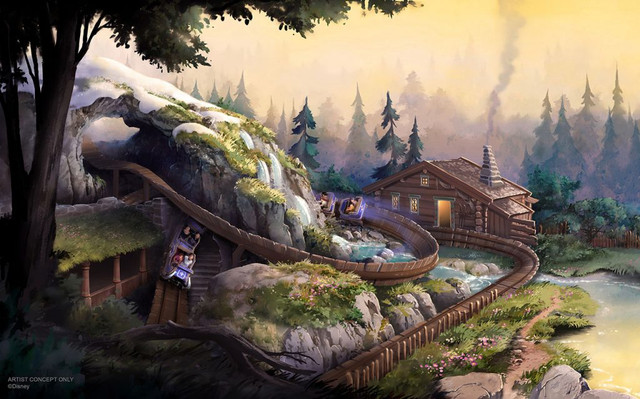 Even though Hong Kong itself is in a bit of a rough situation currently, the park is still underway with the castle transformation and frozen land expansion. Above is the current state of the castle and below is an image straight from imaginnering, showing the concept model of the frozen land for this park. 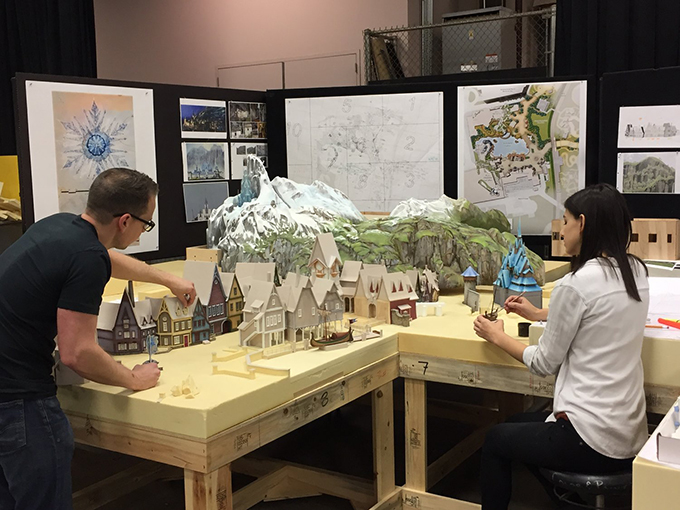