I dont know many tower rides so i wont start a poll but, What is the best Tower Ride you have ever been on?

Mine has to be Tower Of Terror, Orlando. Not just a tower ride but a full story thrill ride with an amazing lift shaft, I can remeber sitting at the top with the doors open then suddenly they close and you drop.

Can anybody tell me how high Tower Of Terror is in feet please, i always wanted to compare it to other drop towers.

So Whats Your Best Tower Ride And Why?
Top

I have a few favourite tower rides. They are detonator extremeley intense. Bounce one hell of a tower ride. Probaly when i go to america the big shot on the stratosphere tower.
Top

I have been on ToT (FL), and thought it had good theming and was a fairly decent drop tower. Although, for the height (329 Feet), theming and the different style seating I pick, Hurakan Condor at PortAventura in Salou.

Me on Hurakan Condor on the Stand-up, No Floor, Tilting side. The quality isn't very good, because I took a photo with my phone of the on-ride photo. Plus I was on it at 9:30 at night.

Here is a site that shows off Hurakan Condor http://www.coasterforce.com/index.php?categoryid=364

EDIT: ToT is about 130 Feet. (I think)
Yesterday\'s the past, tomorrow\'s the future, but today is a gift. That\'s why it\'s called the present.

1: Tower of Terror, florida - words cannot describe how good this ride is, its is my all time favorite ride, anywhere, full stop!!!

2: Tower of Terror, California - number 2 cause again its amazing, but not as good as the original.

4: Big Shot, Stratosphere, Las Vegas - Absolutly breathtaking, what a view would swim back to vegas to go on again!

5: Dr Dooms fearfall at IOA - I love the theming on this ride, its ace!
bigblade40

"bigblade40" wrote:
4: Big Shot, Stratosphere, Las Vegas - Absolutly breathtaking, what a view would swim back to vegas to go on again!

Talking in general, the Big Shot is going to be said to be the best Tower ride, purely on the basis of it height. Although, put the 'Big Shot' on the ground, and what do we have. . . another ordinary tower ride. I'm not saying I wouldn't like to ride it or that its not the best tower ride in the world, all I'm saying is that its ordinary without its Stratosphere tower. Face it, anyone can put a Tower ride on a larger tower if they have the money and planning permission. Whereas, I feel (people will disagree) that Hurakan Condor has much more to offer than the Big Shot.

All I'm saying is Hurakan Condor has much to offer, than the Big Shot does. Many will disagree with me, but its just my own opinion

Regards,
Rollercoasters4Life :D
Yesterday\'s the past, tomorrow\'s the future, but today is a gift. That\'s why it\'s called the present.

I've been on Hurakan Condor twice now and both times it has taken my breath away with the intensity and theming but i do have to say that ToT Orlando has to be my favourite, but very closely followed by Giant Drop, australia, The tallest tower ride in the world and it really packs a punch. Love it so much.
Top

I don't DO power towers/drop towers, but many people tell me that the tower at Holiday Park in Germany is meant to be one of the best

It's not as high as Hurakan Condor mind, so that could be it.

I would certainly say Tower of Terror in Disney's MGM Studios. It's more of an experience, than a ride. Totally immersive throughout!

The big shot it not about the theming or the choice of seating etc, it is the fact it is on top of the stratosphere tower looking over the vegas strip! If big shot was on the ground it would be rubbish, but the way they have done it is absolutly amazing, making it one of the best in the world.
bigblade40

Scream at Heide Park is excellent. Best one I have done for sure.

There are a few travelling ones on the German circuit that looked the part, but gave a bit of a dodgy ride.

As Tim Westwood would say "big props" to the small drop towers at Tripsdrill in Germany though, they are park built and are the craziest, roughest and most insane things ever. Mad!
The best, most informed enthusiast EVER!!111
Top

Tower of Terror at MGM Studios purely because the drops are terrific and every ride is unique. Also, because of the way it's like a hotel as are the staff. Not forgetting the whole story behind it. Also, the views from the top, Blizzard Beach being one. I can relive the ride now :D.

Number 2 would be Detonator purely for the suspense and view of the park.

No way, Orlando's version is ten times better. Yer, i would say Cali's version is OK, but after riding a better themed ride in Orlando, it has no chance.
Top

The existing Tower of Terrors have another now have a sister, which looks even more impressive! This one is themed as a turn of the 20th century New York hotel as opposed to the traditional Hollywood theme and is located at the fantastic Tokyo Disney Sea. 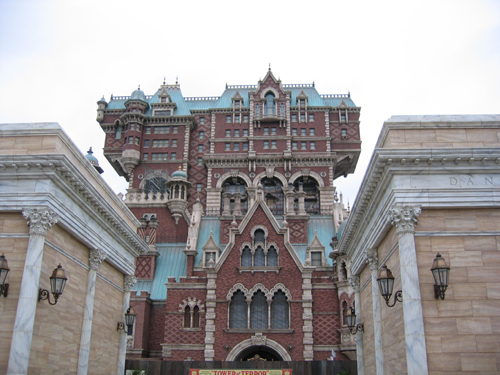 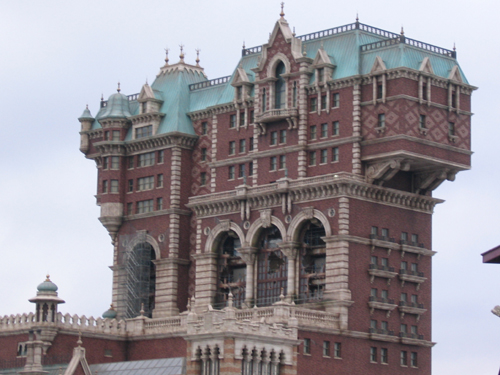 The History of Hotel Hightower...
The once lavish Hotel Hightower, built by multimillionaire Harrison Hightower III, is the setting for the “Tower of Terror” attraction. Harrison Hightower was a great collector of cultural artifacts, and explored various exotic regions in search of valuable relics to take home. Once back in New York, Hotel Hightower was the adventurer’s favorite place to show off his latest prizes and boast about the exploits it took to obtain them. The somewhat less-than-scrupulous Hightower apparently used whatever methods were necessary to acquire the items he wanted, even at times engaging in outright plunder, according to rumor. Still, the parties he threw when unveiling the latest additions to his collection were thronged with high-profile guests and reporters.

On New Year’s Eve, 1899, during a party he was throwing to introduce a strange statue he had gotten hold of in one of the far corners of Africa, Harrison Hightower III abruptly disappeared on his way to his penthouse. After that night, the hotel was closed, and no one has seen Harrison Hightower since.

After its closing, the aura of mystery and foreboding around the Hotel Hightower has only deepened. However, since there is obvious historical and architectural value to the building, the New York City Preservation Society has nowstarted a “Tower of Terror”tour to allow interested parties a peek inside the hotel. What happened to Harrison Hightower the night of his fateful party? You may find the answer by joining one of the New York City Preservations Society’s “Tower of Terror” tours.

I think it's fair to say all of the Tower of Terrors are the worlds best themed rides :lol:. I've only ridden the California version, and it is the best ride I have ever ridden by a long, long shot. It's amazing to think the Florida version is apparently better!

Mine is giant drop at dreamworld australia. I liked it because of the height and you have no idea when you are going to drop plus the views from the top you can see for miles.

HEIGHT
The tallest free-falling ride in the world at 120metres (39 storeys) high Around 400 ft.

bigshot it is totaly awesome and intense
Top