You really don't go to Legoland for 'thrill' rides, they are mostly sedate & slow moving rides but highly themed (to Lego obviously), terrible through put though, you can queue for 2 hours at Windsor for a 2 minute ride, not good with small children.
Top

Today there was a preview for Legoland Florida. Although nothing much was announced there are a few pieces of concept art. 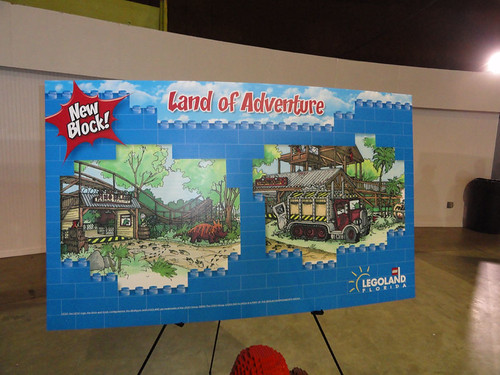 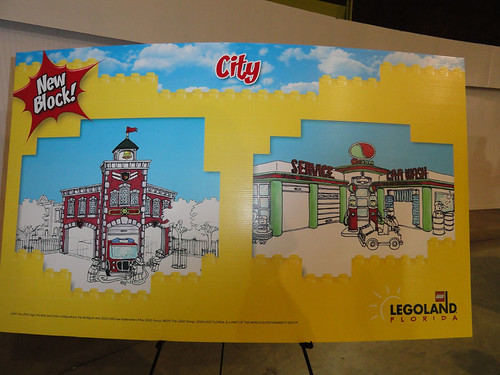 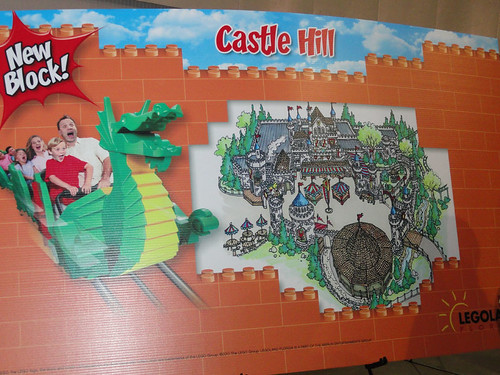 Thanks for the info - just out of curiosity will this be the biggest Legoland does anyone know?
Wishing i was back in the Caribbean
Top

It has been announced that Legoland Florida will open in one years time, October 2011.

And here is a basic map of all the attractions:

I hope those aren't the names of the attractions. :P
Top

Wow it does look like they are spreading the park out - im actually quite excited by this. I think the wooden coaster will be interesting to see how they theme that in with Lego. Does anyone know what the SKI Stadium will be?
Wishing i was back in the Caribbean
Top

It's worth watching the whole video presentation at florida.legoland.com (auto-plays in the top banner). Gives a lot of nice concept drawings and clips.
Top

Due to popular demand, LEGOLAND® Florida has extended its discount on general admission tickets and Standard Annual Passes through April 2011. Central Florida’s newest full-day, family theme park, scheduled to open in October 2011, announced the extension after a hugely successful December sales period. Formerly expected to end on December 31, 2010 – guests will now be able to get the special rate through April 30, 2011.
“Our strong sales numbers have proved to us that people are excited about the opening of LEGOLAND Florida,” Director of Sales and Marketing, Kim Isemann stated. “By extending these special rates through the early spring, we want to allow our future guests the opportunity to lock in their tickets and annual passes before the Park opens.”

Available only at [url=http://www.LEGOLAND.com" onclick="window.open(this.href);return false;]www.LEGOLAND.com[/url], general admission tickets are $65 for adults and $55 for children and seniors. Standard Annual Passes are offered at the children’s prices of $99 with no Blackout Dates! Plus Annual Passes and Ambassador lifetime passes are also available at the non-discounted rates of $159/$129 and $2,500 respectively. These passes includes unlimited admission, discounts on preferred parking, special events, plus discounts on food and merchandise. (Prices do not include sales tax.)

Apparently Legoland Florida has been open for 5 days now but so far I've only seen a few pictures. Anyone else got any more info?

I'm especially curios what they’re doing about the dragon coaster as they normally have a dark ride section but the park has opted to use a pre-existing ride.

^Theme Park Review have done a report of it...

And the Dragon is weird, in that they bungled on the dark ride section and then leads it out (excessively) onto the normal Roller Skater layout...

That's kind of a good idea only that long straight section needs to be the same speed as the lift hill rather than the dark ride. I can see there are a lot of trees planted around that section which should make a nice medieval forest eventually and make that stretch feel less pointless. It’s just a shame it has the weakest layout of all the Dragon rides.

I've been waiting to see what Florida manage to do with their Dragon, and I have to say, it looks naff :|. The models are all standard, same as the other dragons (of course), so no problems there, but the whole thing just looks so sterile. I know I'm biased (rather massively) towards the Windsor version, but you actually (kinda) feel like you're going through a castle, whereas here I don't think you do. It looks fake. It also looked very sparse - there're massive gaps between the models, making it all look rather empty. Windsor's in comparison is bustling with detail. The end sequence with Merlin is also rubbish, and again Windsor's excels here (though it was infinitely better in it's hay-day when the scrim, strobes and roller-shutter worked properly).

I don't get where the lead-out section is so, so damn slow. It kills the flow of the ride and story - Merlin is supposed to 'magic' you to safety away from the Dragon, so as soon as you see him in Windsor you speed up, fly through the (now SBNO) roller shutter, and up the lift hill. In Florida's, Merlin 'magics' you, and... you trundle along, as if nothing's happened.

As for the coaster itself, meh. It's surprisingly noisy in the dark section, and the view from the lift hill is hideous.

Nope, Windsor's definitely wins, even if it is made by the bizarre WGH Transportation Engineering Limited.

(And GRRRR for Florida stealing Windsor's music, The King's Feast :evil:. Written for Windsor (by Andrew McKenna), Windsor had to remove it, and now it's being used elsewhere. Not in the slightest bit surprising, I know, but still massively disheartening :no:)

Edit: Also, I thought our H&S was bad, but my gawd is that thing full-to-bursting with emergency exit signs...
Top

I think the lighting and size of the show room is a big part of the sterile issue. Windsor’s and several of the other originals have a very enclosed and creepy vibe to them. Everything here looks too bright, happy and spread out. The rooms are very obviously one large warehouse because of the box shape.

I was about to make a comment about it being new but then I remembered I rode The Windsor Dragon in ether its opening or second year and it looked right from day one. Again it’s another example of them doing a good job with the basics but missing the all important finer details.


Ignoring the Dragon the rest of the park looks really good.

7 months after Legoland Florida opened the former Cypress Gardens Waterpark has also re-opened. I don't know much about the original Waterpark but it looks like all the slides and pools are the same but with a Lego theme. Technically this is a good thing as there are a few adult orientated slides that I'm fairly sure wouldn’t exist if the place was built from scratch.

One new and interesting idea is the Lego studs built into the lazy river rings. The idea is that as you float around the river you'll encounter giant foam Lego bricks which you can build with on your own ring.

Video of the Waterpark can be seen here

LEGOLAND Florida have today announced that they will launch THE LEGO MOVIE WORLD in Spring 2019:

The announcement follows the success of the blockbuster film, THE LEGO® MOVIE™, the upcoming sequel and the popularity of the film’s characters within the children’s theme park. Working closely with Warner Bros. Entertainment and LEGO System A/S, THE LEGO MOVIE WORLD will place guests right in the middle of Bricksburg, the city where Emmet lives in THE LEGO MOVIE.

THE LEGO MOVIE WORLD represents the theme park’s continuing commitment to providing state-of-the-art experiences specifically designed to create awesome memories for kids ages 2-12. “The sights and sounds will be fully immersive bringing THE LEGO MOVIE franchise to life in a way that only a LEGOLAND Park could,” said Rex Jackson, general manager of LEGOLAND Florida Resort.  “We know kids come from all over the world to meet the stars of THE LEGO MOVIE and we can’t wait to see their faces light up as they interact within the imaginative world of Bricksburg.”

THE LEGO MOVIE WORLD created in partnership with Warner Bros. Consumer Products, will feature three new rides, character meet and greets and a giant themed playscape.  The interactive boat ride, The Quest for Chi, will be completely transformed and will offer guests an exciting new experience when it reopens as a key attraction in THE LEGO MOVIE WORLD in spring 2019.  Guests are invited to experience the current attraction a final time before it closes on May 29.

I believe in their strategy update last year, Merlin mentioned that is was their intention to open such a land in all of their LEGOLAND parks in 2019, and so this was the '2019 attraction' detailed in LEGOLAND Windsor's hybrid application, although the long planning process that has faced has resulted in that now being substituted for The Haunted House - Monster Party. Pending approval of that application, they will no doubt still want to add this development in a future year though, so Florida's land may give us an idea of what to expect at Windsor.

Users browsing this forum: No registered users and 108 guests