I have a bit of a soft spot for the original Disneyland, after Europa it's my favourite park in the world. And my favourite coaster at the park is about to undergo a major refurbishment:

ScreamScape wrote:
2012- Matterhorn Bobsleds Rehab and New Cars - Confirmed - (1/9/12) We’ve got some interesting Matterhorn news today. For starters, Disney has tapped a director for a feature film to be inspired by the ride named Brian Beletic. As for the ride itself… the Matterhorn is now closed starting today through to June 14th. According to the official Disney site, the Matterhorn will undergo a ‘major refurbishment including the addition of new ride vehicles”. So looks like those new sleds will finally be on the way… and gone are the days of couples holding onto each other, or Parents clutching their kids in front of them. I can only imagine that we’ll see the height limit increased on the Matterhorn as well.

Unlike some previous Matterhorn rumours, it doesn't sound like they're messing around with the layout at all and retracking! Remember the Matterhorn was the world's first tubular steel coaster (effectively inventing the steel coaster). We call rides like Nemesis an aged classic or whatever, but this is the real deal.

Interesting news about a film. Obviously some films based on rides do amazingly well (Pirates of the Caribbean) while some absolutely bomb (Haunted Mansion). I think it depends how much they want to throw at this, but a huge-budget film about mountain climbers searching for the legendary yeti would do well whether there is a ride or not I think.

Let's just hope the new sleds don't lose that wild and crazy 'mine train feel' that anyone who has ridden the Matterhorn knows and loves. It's an absolutely unique ride! For anyone who hasn't done it, imagine Blackpool's Wild Mouse crossed with a Vekoma Mine Train (Big Thunder Mountain!) and you're pretty much there.

Dormiens-Dave wrote:
I just love the fact this uses skid brakes and water to slow the cars down

Also it's not entirely gravity driven down-hill, it has kicker wheels in random places! I love the splashdown too. It's really a proto-water coaster at the end. It's a classic Roland Mack-moment, just throw your arms into the air and go "Wahey!"

Unfortunately, I don't think any mounted POVs exist so this will have to do. The drop at 2:15 is ten times more intense and shocking than it looks on this! And it's sooooo long.

Interesting to note about this ride, it's the only coaster I've ever been on with my parents that they both really enjoyed. They both found Florida and Cali BTM boring, my mum found both Space Mountain's too intense for her, and neither of them would ride Hulk or Duelling Dragons or anything. But both of them absolutely loved this! It's one of my best memories, all four of my family going on this for the first time (my parents presumed because I was a proper coaster geek that I would think it was rubbish and tame, and were surprised when I said it was one of my favourite coasters of all time

I really loved Matterhorn when I went on it. It is the definition of a family coaster. It's a shame that the "snug" seats are being taken away, I thought that they added a lot to the experience.

On the up side though, this refurbishment should include a repainting of the mountain exterior so that it looks really well done when Cars Land opens. 'Cos the rock-work in Cars Land looks amazing...

Best themed land ever...better than Harry Potter? It's up there with the best.
Credit to the Orange County Register
Top

Matterhorn update from its major refurbishment:

2012- Matterhorn Bobsleds Rehab and New Cars - (2/8/12) While the outside of the Matterhorn is getting a facelift, and soon a new fleet of Bobsleds will be shooting through the snow, many are wondering just what we can expect to change on the inside of the mountain. I wouldn’t expect anything too dramatic, but I’ve been told that Imagineering is taking the time to plus up some scene and effects. The various show scenes (snow scenes?) will be getting all new lighting packages, and some new projection effects are expected to be added as well. A few extra props and pieces of scenery may also be added along the way. Meanwhile the various incarnations of “Harold” the Abominable Snowman will be getting some thorough tune-ups to be more menacing than ever.

Some news from the biggest parc in Europe.

The exact 20th birthday of Disneyland Resort Paris was on Thirsday 12th.
There was a flashmob with 2000 Cast Member, video here4

Here are Some photos : 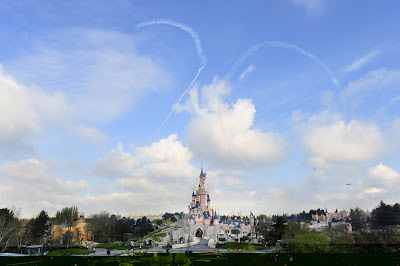 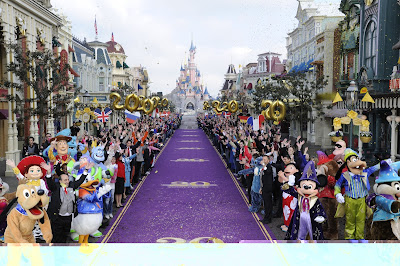 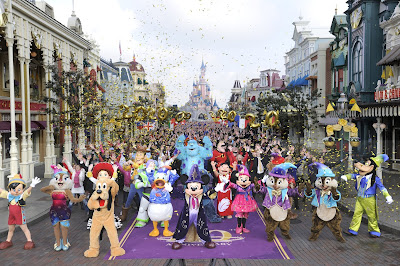 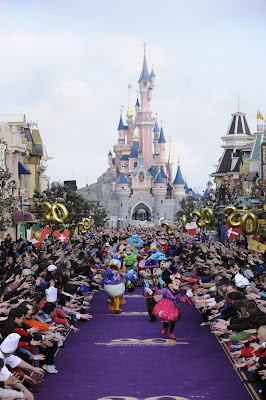 And even Asterix, Obelix and their friends came from Parc Astérix to wish an happy birthday to DLRP! Love it! 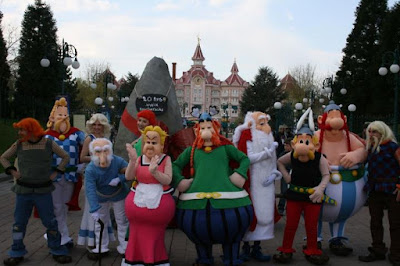 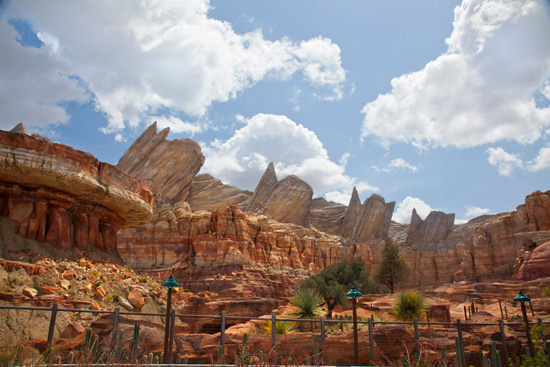 No words can truly describe how beautiful that really is...

Ariel is about to get a makeover — a new hairdo, to be exact.

Less than one year after its debut, the Little Mermaid ride in Disney California Adventure will temporarily close starting today (Monday) to undergo changes. The dark ride will reopen Friday.

Disney officials said they received “guest feedback” and decided to make some changes to The Little Mermaid – Ariel’s Undersea Adventure, which officially opened June 3. See more pictures of The Little Mermaid ride by clicking on the photo, right.

Miceage.com, a Disney watchdog group, reported that John Lasseter, the chief creative officer of Walt Disney and Pixar Animation Studio and principal creative advisor for Walt Disney Imagineering, asked for some upgrades. Read the full story in the Miceage.com website.

“Ariel will receive a new, floating hairdo in the ‘Under the Sea’ scene, and two instances of computer-generated animation in the descent and ascent scenes of the attraction will be replaced with animation sequences from Walt Disney Animation Studios, depicting Ariel as guests remember seeing her in the motion picture – the way they know and love her,” said Kevin Rafferty Jr., a Disneyland Resort spokesman. “With every new attraction, we listen to guest feedback and are always looking at the best ways to tell a great story.”

Screamscape wrote:
General Park News - (5/7/12) Ok, Here we go again. Maybe… or maybe not. You may remember last year when there were countless rumors swirling about Disneyland about a pending 6+ month overhaul for Big Thunder Mountain?  In the end… the major rehab ended up taking place at Matterhorn, and an extensive but shorter rehab is just finishing up on Big Thunder in Florida instead. Well… the rumors about performing the big rehab on Big Thunder at Disneyland have started again, this time claiming that the ride could go down for between 6-9 months, and may see it shut down in early January 2013. Anyone else hearing this?

I've been casually following the Car's land development, admittedly it's probably one of my favourite Pixar films! and the sheer scale and attention to detail of this development is amazing! Harry Potter is amazing, but this blows it out of the water! California Adventure is now finally worthy of the name Disney!

They've added faces to the monorails in Anaheim to promote the new Cars Land. 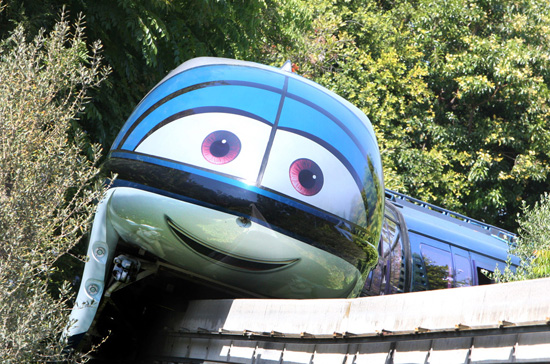 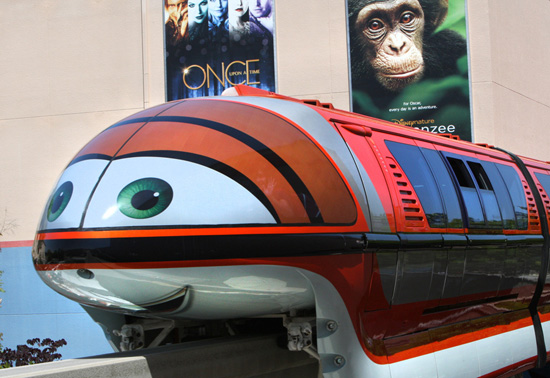 So Disney's latest entertainment has now had it's soft opening at California Adventure. The Mad T-Party replaces Elec-Tron-ica, and looks... well... wow! Why can't we have nice things like this?

A few pics from Dateline Disneyland: It is the first of many new and returning attractions coming at the park in the next few weeks, with the Carthay Circle now out from behind its workwalls, the Play Parade having now returned and Ghirardelli Soda Fountain and Chocolate Shop also having soft opened.

Sam wrote:
They've added faces to the monorails in Anaheim to promote the new Cars Land.

That's a bit cheap and predictable by Disney standards. Shame they didn't go all out with 3D faces, Thomas the Tank style,  Would have been slightly more Disney-esque.

Doubt they could do 3D faces without blocking the view of the driver...

I like it, as I liked the Tron and Avenger wraps...

I think Cars Land has opened now, as a POV of Radiator Springs Racers has surfaced.

Didn't realise there was such a huge indoor dark ride section, which looks incredibly themed (even for Disney!)

Would love to give this a try as I thoroughly enjoyed Test Track!

I'm gonna be honest, I'm quite impressed. The dark section looks exceptionally good, only bit that is weak is where the car seemingly waits slightly for the one behind. It appears you either get a gd experience after the tyre workshop or a bad one... :/
Top

The cost of all that. Really, it is just mindblowing.

Would love to go!

Wow that is mighty impressive. The theming is just stunning, and the whole experience just looks great fun. I'd really love to ride it someday.

Very impressed indeed, looks like an excellent ride which makes me hopeful for Ratatouillie in WDS